The love story of the decade is coming to television. Deadline reports that Blumhouse Television is adapting Joshua Green’s “Devil’s Bargain: Steve Bannon, Donald Trump, and the Storming of the Presidency” into a limited series. Get the details and buy the book below.

From Deadline:
Jason Blum’s Blumhouse Television, which has a high-profile Roger Ailes limited series in the works at Showtime, is taking on another controversial media titan, former Breitbart News topper Steve Bannon who is now President Donald Trump’s Chief Strategist. 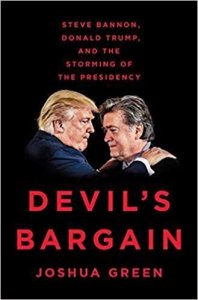 Blumhouse TV, run by co-presidents Marci Wiseman and Jeremy Gold, has acquired the rights to Joshua Green’s newly released “Devil’s Bargain: Steve Bannon, Donald Trump, and the Storming of the Presidency” for TV development as a limited/event series. Green, currently the senior national correspondent at Bloomberg Businessweek, will be involved in the development of the project, which will tell the inside story of the partnership between Bannon and Trump which led to the greatest political upset in U.S. history.

Published last week, the book has earned strong reviews and has landed at the top spot of the The New York Times bestseller list.

Based on dozens of interviews conducted over six years, Green traces Bannon’s surprising trajectory from working class Irish-Catholic Democratic roots to Breitbart News and his hard-edged ethno-nationalism, including hostility toward Muslims and all immigrants. He also masterminded a years-in-the-making plot to undermine Hillary Clinton largely by highlighting her financial ties to foreign donors through the Clinton Foundation, which helped to pave the way for Trump.

Bannon became a bomb-throwing pugilist who was despised by Democrats and Republicans alike. Although he’d never run a campaign in his life, on August 17, 2016 with the blessing of Robert Mercer (the ultra-secretive right-wing billionaire backer of Breitbart News), Bannon took over Trump’s foundering presidential campaign and steered it to a shocking triumph, for which he was rewarded with the job of White House chief strategist, a position he still holds today. It’s way too early to discuss castings on the project but it will be interesting to see who will get to play the firebrand duo at the center of it.

Devil’s Bargain joins Blumhouse TV’s Showtime limited series Secure and Hold, about the rise and fall of former Fox News Chief, Roger Ailes, from Oscar-winning filmmaker Tom McCarthy, based on journalist Gabriel Sherman’s book, “The Loudest Voice In the Room“ and his coverage of Ailes for New York Magazine.

This article is being republished with the permission of Deadline. To read the original version, click here. If you buy something because we told you about it, we may receive compensation from retail partners.