CNN has released a second-printing of its 2016 presidential election coffee table book, “Unprecedented,” and Donald Trump isn’t too happy with the photo they used of him on the front cover.

The President-elect sent out this tweet to express his displeasure, though the tweet has since been taken down. 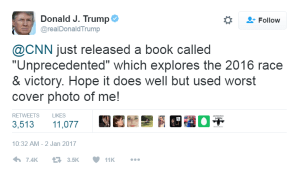 From Deadline.com:
This came as a surprise to the photographer, Pulitzer Prize winner David Hume Kennerly, given that Trump expressed approval of his work during the shoot. “When he looked at it in the back of the camera the day I took it he liked it . . . plenty of witnesses!” Kennerly responded via email when we reached out.

According to Kennerly, who won the Pulitzer for his Vietnam photos, and who served as chief White House photographer for President Gerald Ford, CNN requested a photo shoot with Trump after the election, to get a new portrait. It would be used on the second printing of the book. Trump agreed, and the shoot took place on November 21 at the POTUS-elect’s Trump Tower office.

It was a quick shoot, lasting about three minutes, Kennerly tells Deadline, in which he shot only about 16 frames. During the shooting, Trump asked if he could see what Kennerly was doing; the photographer showed his subject a couple of the frames, which he reports Trump said he liked.

Neither Trump nor his team were involved in deciding which of the shots would be used, Kennerly says. He describes the difference among the shots, saying some showed Trump smiling more, while, in other frames, he looked more like “the You’re Fired Guy on The Apprentice.” 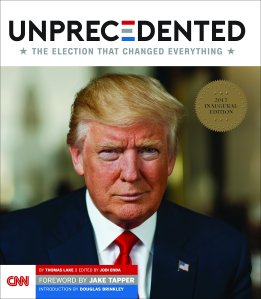 Unprecedented’s second printing features a new cover for the inauguration, with an exclusive portrait of the president-elect, Donald Trump.

This photo was chosen because, among those expressions, it “was in the middle,” and “the one I like the best,”said Kennerly, who also has about 30 photos featured in the book. “It’s a good expression; I’m very happy with how it came out,” he added.

He described the photo session as cordial, saying “he was very nice to work with; very professional.”

Trump since has taken down the tweet. Though other media outlets have speculated Trump does not like the portrait photo because it was shot not long after he’d had a tense meeting with TV execs, our CNN insider tells another story. They believe Trump got confused, and may have thought the election-night news photo of him used on the cover of the book’s first printing was the portrait photo now being used on the cover.

This article is being republished with the permission of Deadline.com. To read the full version, click here. If you buy something because we told you about it, we may receive compensation from retail partners.