* Thermal imaging camera attaches to your iPhone or Android
* Offers state-of-the-art imaging technology at an affordable price
* A great tool for home inspections, seeing in the dark, and checking for leaks

There are a handful of portable thermal imagers on the market, but most are either too expensive, too ineffective, or both. That’s what makes the FLIR One such a peculiar product: Not only does this thermal imaging camera sport some of the strongest specs on the market, it’s also one of the cheapest.

Add Comment
2 People Commenting
T. Hutchinson
3 years
I've had the FLIR One 2nd-generation for three years now and I'm still impressed with its capabilities....
Chantel Keona
3 years
This is cool. Thanks for sharing.

Now well into its third generation, the FLIR brand has carved a name for itself in the home improvement market. We recently had an opportunity to try one of their imagers to see whether the brand was able to live up to the hype. Here’s what we discovered.

Add Comment
2 People Commenting
T. Hutchinson
3 years
I’ve had the FLIR One 2nd-generation for three years now and I’m still impressed with its capabilities….
Chantel Keona
3 years
This is cool. Thanks for sharing. 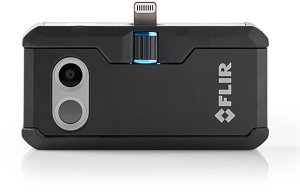 As an all-in-one thermal imager, the FLIR is traditionally used for home inspection and for checking household appliances, such as pinpointing water leaks, identifying clogs around the sink and bathroom, spotting loose or faulty wires, and checking your HVAC for any potential issues.

Because it detects temperature, the FLIR is essentially a night vision camera, so you can also use it to see in the dark. And though it may not be mentioned anywhere on FLIR’s website, this thermal camera has also been used to search for ghosts.

In fact, there’s a whole community out there dedicated to special image captures using FLIR devices and other thermal sensors. If you have any interest in the paranormal, it’s worth checking out.

The thermal imager works by translating temperatures into color categories: red, yellow and orange all indicate hotter temperatures, while purple and blue indicate cooler ones. Here’s a quick snap I took of my cat. Notice how the color changes around the mouth. 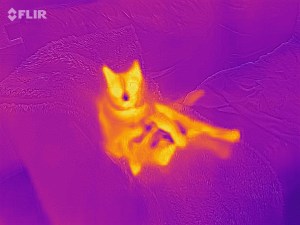 Unlike other thermal imagers, the FLIR One attaches to your Android or iOS device for instant portability. The camera itself runs on a rechargeable battery, so you’ll need to power it up before you take it for a run. While that may seem like a hindrance, it’s actually a plus, as the FLIR won’t negatively affect your phone’s battery. What’s more, it connects and charges your phone’s USB port, so there’s no need for excess cables.

The device itself also comes with built-in bumpers to help it securely attach (and detach) from your phone’s charging port. I was literally able to shake my phone up and down without the camera ever moving. It also sports a unique OneFit connector that lets you adjust the size of the clip based on your specific phone.

It’s worth noting that the FLIR One’s imaging technology was actually taken directly from the U.S. military, so it’s no stretch to say that this gizmo is pretty robust.

You’ll need to download the free app in order to use the camera (here for iOS and here for Android). Simply sign up for your FLIR account by entering your name, email and going through the brief setup tutorial. I don’t think it’s possible to even access the camera without first downloading the app. That said, FLIR is constantly rolling out updates and improvements to add more features, offer new tutorials, fix old bugs, and make the product as streamlined as possible. 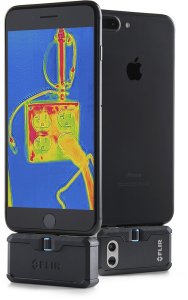 As soon as you’ve gone through the setup process you’re instantly given free reign with the imager and its myriad features. You’re able to record video, take high-res pics or even set up a time-lapse mode, which I assume is better for nighttime use. The image option, in particular, is part of what makes the FLIR One imager stand out. With MSX and VividIR enhanced image processing, you’re able to take incredibly high-quality shots every time.

One thing I will say is that I wish there was a more robust tutorial; with so many built-in features and settings, it’s a bit overwhelming at first to really take full advantage of all the customizable settings.

Image Quality and Other Stats

The first thing I noticed was how crisp and clear the image quality was. The Pro model, which is the one I tested, boasts a thermal image resolution of 160×120 — that easily blows the competition out of the water. It also has a pretty impressive heat range that can detect temperatures as high as 752 degrees and as low as -4.

The videos and still images are automatically saved as 1440×1080, which is ridiculously impressive for a mini thermal imager, much less one that fits onto your phone. I noticed pretty early on that the imager takes a few seconds to adjust to new light, which is not a problem, per se, but it’s worth waiting a few seconds before you start recording a new video. 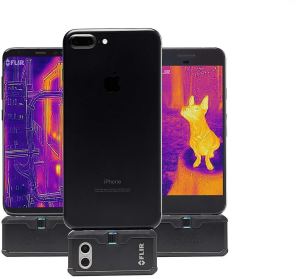 If you’re in the market for a thermal imager and don’t want to deal with the $1000+ price tag associated with most high-end models, the FLIR may be right up your alley. With enough power to compete with the big dogs, plus the added benefit of attaching to your phone, this thermal imager is great for everyday use and comes with a bundle of bonus features — something you won’t get from a traditional thermal imager.

As someone who’s just starting to become more acquainted with household appliances and how they work, the FLIR One has already become an essential tool in my growing toolbox. I’ve been extremely impressed with the quality of the stills and videos, and I’m sure you will be too.