Founded in 1999 by audiophile and music lover Deepak Jain, Fluance is a hidden gem in an overcrowded market of audio companies. Based in Canada, the home audio maker boasts a vast range of handsome products from bookshelf speakers and turntables to standing speakers and, of course, a soundbase. What sets Fluance apart from the rest of the pack though, is their commitment to making gorgeous products. These aren’t the speakers you shove in a wall or use purely for their sound, they are the speakers that sit at the focal point of your entertainment system. They’re elegant, polished, and deserved to be both heard and seen.

As somebody who is used to large speakers for music (but not TV or film) I was excited to give Fluance’s AB40 Soundbase a try and see what difference (if any) it made in my overall viewing experience. After a handful of movies, episodes of Stranger Things and a couple of albums, I found the AB40 to a big and beautiful addition to my entertainment setup. Thanks to my open setup, the AB40 slid right in without disrupting my viewing experience, but it did change the way I watched movies and TV at home. It’s became a welcome part of my system and for the price, an unbeatable upgrade I’ll find hard to live without.

Breaking Down the AB40 Soundbase

The AB40 Soundbase is a soundbase made to upgrade your home entertainment system. For clarification, this is not a soundbar. The difference, though small, is that a soundbase comes with a built in subwoofer, while a soundbar is a long row of speakers. Arguments can be made on both sides, but if you’re looking for an all-in-one product, the soundbase is the ticket.

The AB40 sits at 3.9”H x 26”W x 14”D, weighs 24lbs and can hold up to 150lbs, according to the manufacturer, which means it’s going to be a heavy addition to your entertainment cabinet or TV stand. That said, Fluance designed the soundbase to sit under and support a TV, and with a 150lb limit, it should be find holding up just about every TV on the market. The AB40 comes in either all black with a black painted wood cabinet and matching black grille, or bamboo, which features a more natural looking wooden cabinet, with an accompanying gray grille. 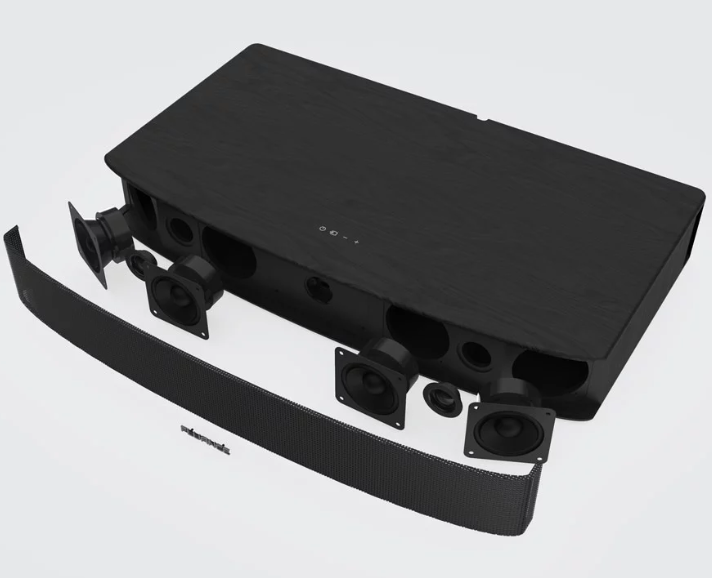 Under the hood, the AB40 boats six 2 way drivers, two 1” tweeters and four 3” woofers to provide a full range of sound detail that had music and peripheral noises bouncing off my ways to create a surround sound-like experience. The soundbase can support auxiliary, Bluetooth and Digital Toslink Optical, so you can amplify just about anything you can think of. As suggested by the manufacturer, I plugged mine into my Samsung TV via the Digital Toslink Optical cable, and rested the TV on top of the AB40. From there, I also paired my iPhone with the AB40 via Bluetooth, so I could throw on music if the mood struck me.

First thing’s first, setting up the AB40 was easy. There’s nothing better than opening a box and being able to discern which plugs go where without cracking open a manual. The manual was there, of course, but I didn’t need it. I simply unwrapped the soundbase, placed it under my TV, plugged in two wires without any thought, and turned the AB40 on.

Second of all, the AB40 is beautiful. I was sent the bamboo colored device, and even though I would likely purchase the black AB40 as it matches the decor of my entertainment system, the bamboo looks great. The wood finish is smooth and easy to the touch and the buttons on the device sit flush against the finish. What’s more, there’s a removable sticker that gives you a quick rundown on how to read the soundbase. A colored light (which is visible from within the mesh speaker) shines white if connected via optical, Green if by AUX and blue if by Bluetooth. I love it when companies make this apparent without ruining the design. It’s easy enough to remember, especially blue for Bluetooth, and once I got the hang of it I simply peeled off the sticker. It’s like it was never there.

To test out the speaker, I decided to open Netflix by way of my Apple TV HD. The bah-boom noise that is Netflix’s signature opening shook my set thanks to the AB40’s built in bass/woofer. It was a pleasant shock, and one that bode well for my time with the device. If I could feel the bass on the intro, imagine what a flick like Spider-Man into the Spiderverse would sound and feel like!

The intro to Spiderverse,for those who don’t know, is a glitchy trip through New York and its multiple universes. For this, I explored the AB40’s 3D mode. Again, without reading directions or background (which, worry not, I’ve since done) I could feel the difference. When seen in theaters, the intro was anxiety inducing (in a good way). I felt as if my own atoms were scratching and shaking. Watching at home with Fluance’s 3D sound turned on, I felt the same way. My heart felt like it was vibrating back and forth, and I didn’t want it to stop.

The beauty of the 3D setting is that it actually works. Seen from a product description, a feature like this could (and would) come across like a marketing tactic. But, having spent time with it, I could feel the difference. Sounds seemed to swirl around me instead of blast me head on. It’s like the sound waves were boomerangs, whipping and whirling around me. I felt part of the movie, instead of simply watching a screen in front of me. I don’t have a surround sound setup, and honestly, the AB40 made me feel like I didn’t need one.

Tyler, the Creator Live in my Living Room 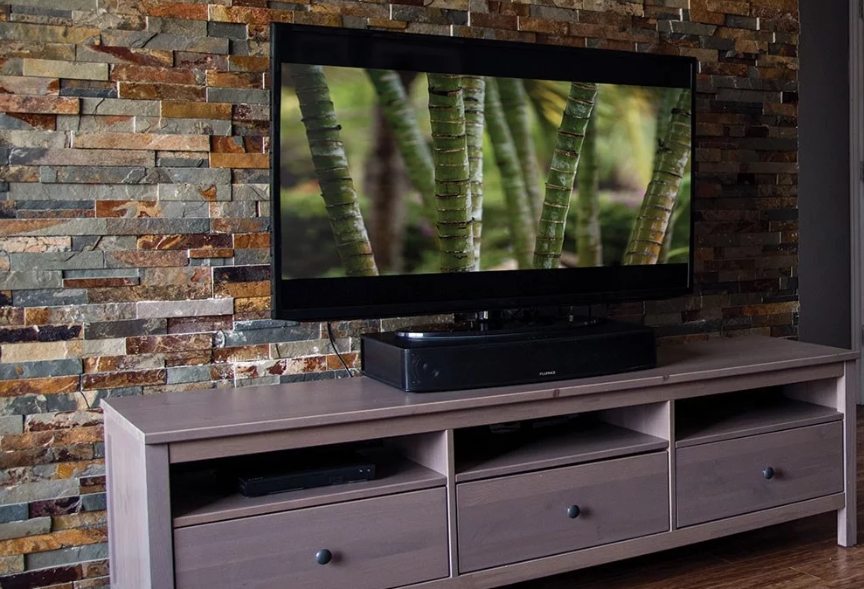 A warning on the AB40’s box said: “The break in period for our speakers is about 10 hours of playing time at normal listening volumes. After this period, the drivers will have had enough movement to perform at their peak level.” I let Spiderman play and then watched Stranger Things Season 3 until I hit that quota, all so I could play some music and really test the limits. I loved how I could play with the sound level, sound style (Standard mode, 3D mode and Bass mode), as well as pause or skip all from the remote. Though I can (and, likely, would) use my phone to control the tunes, it’s nice to have options.

To put the AB40 to the test, I turned on Tyler, the Creator’s latest album, Igor. I picked Igor because Tyler packed a ton of range into every song. There’s reverberating low end, high pitched vocals, twinkling pianos and a laser fight’s worth of synths in just the first song alone. But once the bass kicked in 30 seconds into “EARFQUAKE,” I knew I had picked the right album to let the AB40 flex. Suddenly my console that was doing great handling the random hiss or scream from Stranger Things was shaking with Tyler’s tunes.

Even after Playboi Carti left the scene and Tyler waltzed back into the frame on “EARFQUAKE,” I started to hear new parts to the hit single that I hadn’t picked up until playing on the AB40. The snaps and cracks were louder and more defined. And once I switched into 3D mode, I felt like I was listening to an entirely different album, even though I’ve played Igor countless times.

Out of the range of different settings, I preferred Bass Mode while listening to music. I’m more partial to hip hop, so the extra boost to the already booming bass for artists like Tyler was a welcome perk. However, if you prefer other genres with a little less bass (such as folk, country or calmer rock) the 3D mode works well. The AB40’s ability to wrap you in a cocoon of sounds makes a casual listen to “Shelter From the Storm” feel as though Bob Dylan is on a stool singing right in front of you.

Another nice feature I really enjoyed was the device’s ability to drop the Bluetooth then pick it back up during and after a phone call. While listening to “NEW MAGIC WAND” by Tyler, a friend called me. I was using my phone to control the music and as my phone rang, the sound from the AB40 cut out. At first, I was worried my friend’s voice would come blasting through the AB40 speakers as soon as I answered, and I rushed to change the audio output. However, I didn’t need to do anything. When I picked up, my friend came through my phone speakers like normal. And even better, as soon as we hung up, the song picked right back up from where it left off on the AB40. Neither Tyler, nor Fluance, missed a beat.

An Interface too Clean for its Own Good 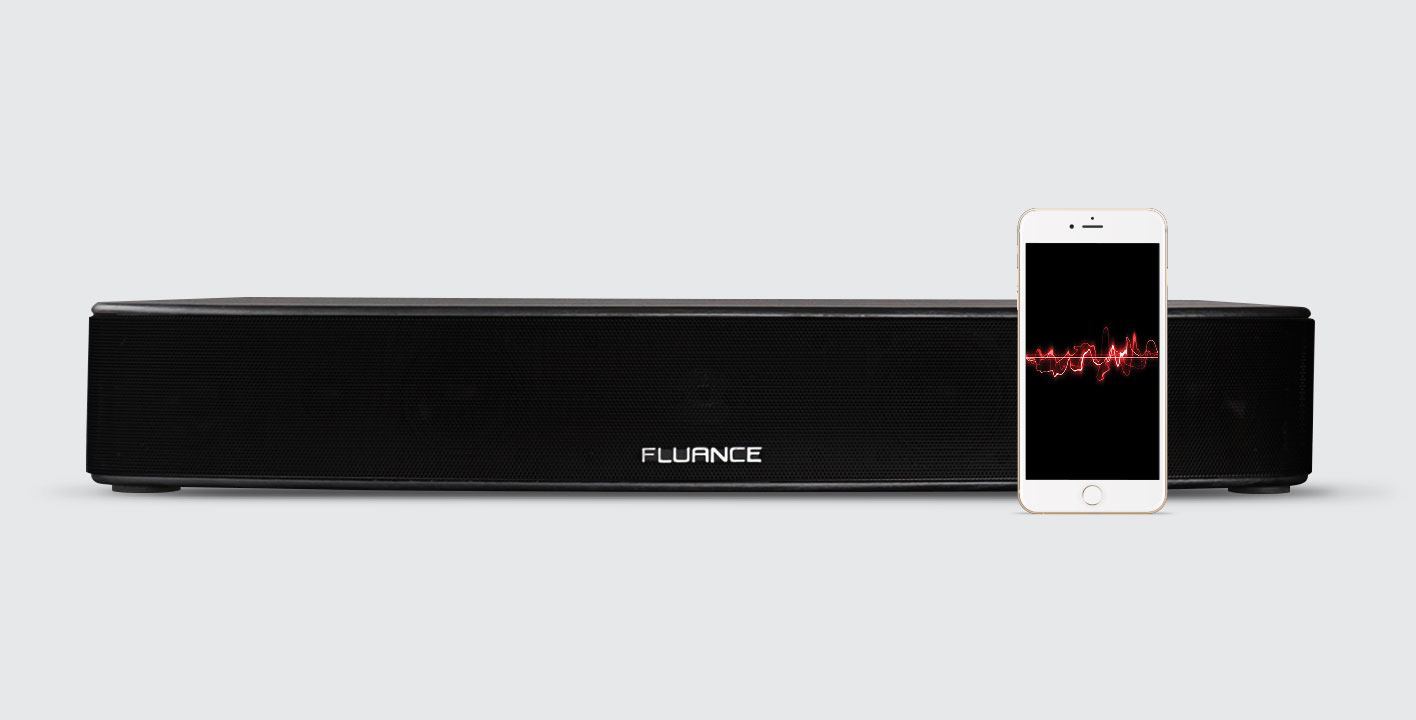 While I loved my time with Fluance’s AB40 Soundbase, and felt it sat well with my setup, I could see a few potential issues. First, it’s a bit tall. Depending on your situation, and if you plan on resting your TV on top of the soundbase as Fluance suggests, this might be an issue. If, for example, you have a cabinet and have pre-fit your TV, this might cause you some trouble. Second, there’s no sound-level indicator. It’s pretty easy to tell what’s loud and what’s not, but still, it would help to have a way to tell what sound level you’re on. There’s no digital display whatsoever that tells you which sound mode you’re on either, which became frustrating as I tried to toggle between Standard, Bass and 3D. Finally, I wish the remote didn’t require AAA batteries. It’s 2019, everything I own can be charged and recharged by way of a USB cable. For example, my Apple TV remote is rechargeable with a lightning cable and its paper thin. Is this the biggest concern? No. But, if we’re talking concerns and nit picking (which I most certainly am) then yes, it would be a nice upgrade.

At $200, the Fluance AB40 is an amazing deal. It’s a solid and steady feeling soundbase that delivers massive sound. I never thought my TV speakers were bad, but now, I’m not sure I can go back. Television speakers are notoriously average, but this makes them seem downright absurd in comparison. After living with the AB40, my stock TV speakers sound closer to crappy complimentary airline headphones than what an entertainment system should sound like.

If you already have a full audio setup in your home, you can add to it with the AB40, but you won’t need it. However, if you’re looking to boost your TV or sound system and want a single piece that can upgrade your music listening and movie watching experience, the AB40 was built for you. It’s relatively inexpensive given the quality and requires next to no hassle installing. One plug into the TV, a plug into a nearby outlet and you’ve upgraded your home entertainment console. With this as the epicenter for your entertainment system, you’ll soundtrack your parties and sink deeper into your favorite shows. Just make sure you live on the bottom floor, your neighbors below you are almost guaranteed to complain about all the noise and the shaking.

The Best 65-Inch TVs Are More Affordable Than You Think