We might not know who’ll win the battle between the dead and the living, but one thing’s for sure: This Night King figure has already won a place on our shelf.

This officially licensed Game of Thrones statue is a perfect representation of Westeros’s greatest threat. At roughly eight inches tall, he looks every bit as menacing as his on-screen model. He also comes with his own integrated stationary base to keep him from moving about. If only Jon Snow had one of these. 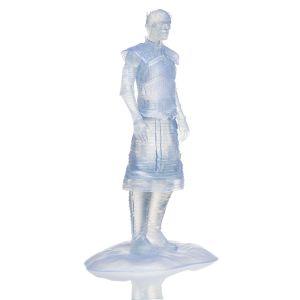 This stellar statue is a translucent variant of the insanely popular Dark Horse figure. Sporting the same amazing accents and impeccable attention to detail, this one’s a ThinkGeek exclusive. (Translation: It’s going to be super hard to find soon.) Just make sure you keep him away from your food — you don’t want a side of zombies with your eggs and hash browns.

Gift Of Thrones: The Best Gifts For Game Of Thrones Fans

While this guy looks great in any setting, you can pop a little light nearby to make him really shine. Made of premium non-phthalate materials, this figurine — like the Night King himself — is built to last. Unfortunately, this deal won’t. Considering the original figures are going for nearly $100 on eBay, you may want to jump on this deal while there’s still time.

Want to win a Game of Thrones Night King Figure for yourself? We’ve snagged one from ThinkGeek to give away to a lucky follower. Enter your details below. Contest ends March 31, 2018. Good luck!