This Sunday every House in the Seven Kingdoms will be tuning in for the Season 8 premiere of “Game of Thrones.” The long anticipated final season of the epic we’ve come to love is finally almost here. While we wait this last week, the fandom that spreads far and wide will be re-watching previous seasons to get their minds readjusted to the current context of the TV series. However, for some fans, this just won’t be enough to become fully entrenched by Sunday. To really get into the mood, you’ll need to immerse yourself into the Seven Kingdoms with the proper drinks, foods and games fit for a royal wedding.

Whether you’re watching the premiere episode at home alone, with a fellow Game of Thrones (GOT) fanatic or having a whole viewing party for this Sunday, here are some of the best ways to go that extra mile as a fan.

First and foremost, you should drink and you should know things like Tyrion Lannister. Having the correct bottle of wine to serve to your guests is a way to get off on the right foot. But what if they prefer a sour Dornish Red instead of the fine Arbor Gold? No problem, get both. These GOT Wines will impress any tier of fan. Well, maybe besides Tormund Giantsbane with his jug of fermented goat milk. 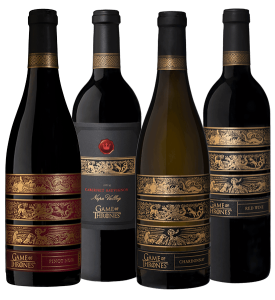 For those who don’t drink wine and prefer a good ale, look no further. We will point you in the right direction to get as fat and drunk as King Robert, just watch out for any wild boar. Ale is drank in nearly every corner of the realm so its only fitting that you get the correct beer to match the intensity of the characters drinking their troubles away. These five GOT ales are brewed by Brewery Ommegang in Cooperstown, NY and they aim to replicate the very ale drank by your favorite characters.

Whether you decide to drink more wine or ale, there are plenty of fun drinking games to be made up for the premiere. For example, drink every time Tyrion drinks, when someone says “winter is coming”, when characters are having sex and when swords are drawn. Just finish your glass when someone is beheaded. Just make sure you have enough for everyone.

No royal occasion is held without the traditional Pigeon Pie. No, you don’t have to bake live pigeons into it and slice it open with a sword like Joffrey. This pie can be made a few days in advance so take  look at the recipe now and make sure you get all the ingredients this week at the grocery. Let’s hope you find your touch for baking like Arya’s old friend Hot Pie.

In the name of King Rob, we shall feast upon the very beast that killed him in his drunken stupor. Maybe not the same one, but nonetheless a nice big piece of meat roasting for a few hours in a crock pot will have your guests salivating before the new episode. It’s up to you to roast it or jam a sharp stick through it and cook it rotisserie style over an open flame. Cook to your liking, but be sure to not hand out any silverware to your guests so you can devour it with your hands. The more primal this meal the better.

This will be your most popular item. Dragon eggs are not difficult to make. Just watch out if they hatch. You’ll have a real fire hazard on your hands if they do. Simply take ordinary eggs and boil them as if making hard boiled eggs. Remove them from the pot and crack the outer shell, but leave it still around the egg and in tact. Place your eggs back into the pot, fill it with water, add 1/4 cup of soy sauce, 2 teaspoons of salt, 2 tablespoons of butter or molasses and 8 tea bags. Bring the mixture to a boil and then let it simmer for about half an hour or until the color has set into the eggs. This will create some pretty cool looking dragon eggs that are totally edible, but even cooler to take pictures with or name your own dragon.

From the shores of Kings Landing to the cold rolled steel gates of Castle Black, you shall be the most decadent host of the realm. Host a contest with all of your friends. Give everyone a sheet of paper and  have them make two columns; a dead one and an alive one. Have everyone write down who they think will be alive and who will be dead by the end of the season. At the bottom of the sheet also write down who you think will be sitting on the Iron Throne once the dust, or snow, settles. You may also want to have a list of the still alive and relevant characters ready for this. At the end of the season, you can compare each sheet with the actual outcome and perhaps award a crown to the winner.

The Ultimate SPY Guide to Game of Thrones