The strange story of George W. Bush’s painting and art is one of those rare tales that contradicts F. Scott Fitzgerald’s famous assertion that there were no second acts in American Lives. In President Bush’s second act, he has become an advocate for veterans as well as a painter in oils.

Add Comment
1 Person Commenting
GEEZ
5 years
Find it today on the shelf next to "The Paintings of John Wayne Gacy". Tomorrow in the...

This beautifully produced hardcover book collects 66 full color portraits and a four-panel mural painted by former President George W. Bush, depicting veterans who have served since 9/11 and who he has personally gotten to know. The portraits and artworks appear alongside text by President Bush, and the book features a foreword by former First Lady Laura Bush.

Add Comment
1 Person Commenting
GEEZ
5 years
Find it today on the shelf next to “The Paintings of John Wayne Gacy”. Tomorrow in the…

Working with the George W. Bush Presidential Center’s Military Service Initiative, the former President has taken the time to get to know some of those who have served with honor and distinction and returned home with wounds – some visible and obvious, others less so. And it’s the treatment and recovery from those invisible wounds that the public and civilians in general often have trouble understanding, just as there often are still inadequate resources for overcoming those scars and making the transition back to civilian society. 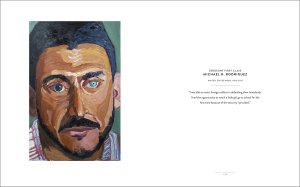 President Bush is donating the author proceeds from “Portraits of Courage” to the Presidential Center to help with the Military Service Initiative. The book itself provides a valuable service as well, with its illustrations and stories showing the often misunderstood nature of the costs which war levies on all of those who experience it.

In taking the time to listen to veterans’ stories and to tell them publicly in such a contemplative medium as oil paint and written text, President Bush aims to encourage empathy and understanding, and support the cause of healing. “Portraits of Courage” calls attention to the wounds of war, both in their obvious visible sense and in the invisible sense of the loss and trauma that war leaves behind, even for those who return with all their limbs.