Every tech company is making some version of true wireless earbuds. From longtime audio brands such as Jabra, Sennheiser, and Ultimate Ears, to consumer tech giants like Sony, Samsung, and Apple, wireless headphones have cemented themselves as critical tools for everyday life.

Yes, even the almighty Google has entered the ring with a pair of their own. Even though I’ve never had the chance to check out their previous earbuds, it looks like the company has finally perfected the craft with its latest Google Pixel Buds Pro earbuds. Are they loud enough to make a grand enough entrance in an already overcrowded earbuds market? 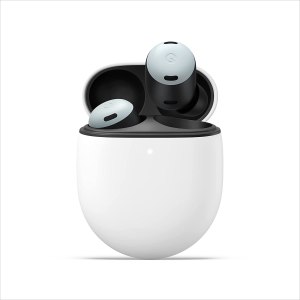 Compared to other earbuds I’ve recently tested, like the 1More Comfobuds Mini and Sony Linkbuds S, the Google Pixel Buds Pro are a bit more conspicuous. These earbuds are more recognizable when worn because they’re bigger in size. Take a peek at the side-by-side comparison photo below.

Read more: Most Comfortable Earbuds You Can Wear All Day 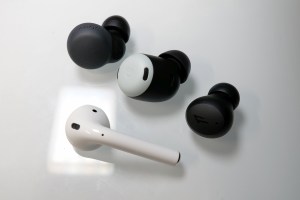 Despite the chunkier size, I will admit that they were fairly comfy in the ear. The earbuds stay in place during normal use, but I often found them loosening while lifting weights and building up a sweat. When I went for a run, I found them loosening much faster because of the jagged movements.

At first, I wasn’t a huge fan of the bulky look, but there was something about the two-tone finish that gave it more of a fashionable guise than other uniformly colored earbuds. Don’t let the bulk fool you, it’s stylish in its own right.

The Google Pixel Buds Pro earbuds have the best controls I’ve found in a pair of true wireless earbuds. That’s sounds like a lot, but many other earbuds barely scratch the surface of this category. For example, I can control every aspect of the music playback experience through the earbuds, and without having to use my smartphone. 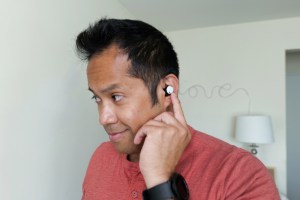 Pause, play, track forward and track reverse functions are achieved by single, double or triple pressing on either earbud. Adjusting the volume is easily done with a swipe forward or reverse gesture. Other earbuds I’ve tested rarely offer built-in volume controls, which make the Google Pixel Buds Pro handier for that smartphone-free experience.

I also love that Google Assistant is accessible with a long press or an on/off toggle of the noise cancellation feature. When at the gym working out, it was remarkably useful to have all of these functions at my disposal without going to my phone. It takes out extra steps to complete a function which, after all, is the goal.

Google did a fantastic job tuning the audio of the 11-millimeter drivers in each earbud. Audio performance is superb, providing detail and clarity to the highs even when the lows have a commanding presence. You could say it strikes a good balance because it had enough bass and treble to make the audio rich in tone.

If there’s one thing I could add, it would have to be the ability to tweak its performance through custom equalizer settings. I don’t mind the heavy bass overwhelming most of the audio, but other people may prefer to mitigate it. Having that option would’ve been great. However, I have to give Google the credit they deserve because the Pixel Buds Pro sounded so good, no matter what I was playing.

Surprisingly, Google did a pretty amazing job at cutting out ambient noise whenever I turned on noise cancellation. Is the performance better than Sony’s LinkBuds S? I could still hear a smidge of the noise around me with Google’s earbuds, but that all goes away the moment I play music. 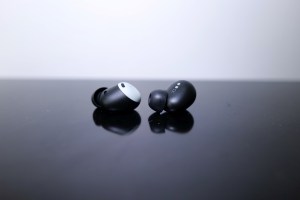 In fact, it was nearly impossible for me to tell the difference in performance with both sets of earbuds while listening to music.

Impressively, the earbuds dropped by 5% after listening to music for 30 continuous minutes with noise cancellation off and the volume set to the middle setting. I also like that you can extend the battery life with the case, adding two additional charges. 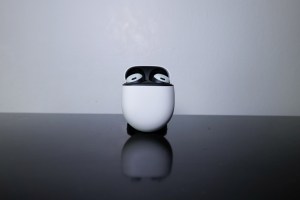 As for recharging? Google added wireless charging to the case, which is what you’d expect from a product at this price point. Furthermore, it can deliver up to three hours of listening time after 15 minutes of charging. At the end of the day, it’s possible that you can go for weeks without having to recharge it.

The Verdict: Should You Buy It?

I did not expect to like the Google Pixel Buds Pro as much as I did after testing them. From its sweet audio performance to its excellent battery life and handy noise cancellation, they’re definitely in the running for the best true wireless earbuds. Adding more to its arsenal, you also have features such as the ability to find them through Android’s Find My Device portal in the event they’re lost or misplaced. 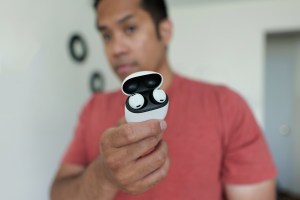 In a way, I would argue that they offer better value than the Apple AirPods Pro because of the $200 sticker price attached to the Google Pixel Buds Pro. It’s lower, plus you’re getting the savings without compromising on the features.

No question, especially if you’re an Android user because of the intuitiveness of setting them up.