Hamilton broke numerous box-office records in 2015, earning a record-breaking 16 Tony nominations and a Grammy for Best Musical Theater album. It even won a Pulitzer Prize for drama. With all the praise, it’s easy to forget that the idea for this larger-than-life musical came from a small mixtape.

Back in 2009, actor and composer Lin-Manuel Miranda began developing the idea for the musical after reading a biography about the life and legacy of Alexander Hamilton. After working on numerous songs based on the Founding Father’s life, Miranda began a project he called the “Hamilton Mixtape,” which would go on to inspire the record-breaking Broadway musical. 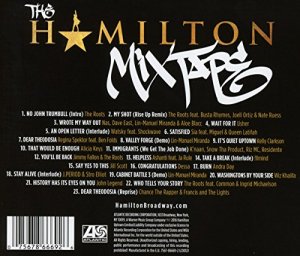 The Hamilton Mixtape on Cassette

The mixtape takes the already beautiful scores and reinterprets them with an added vigor thanks to musical legends like Nas, Alicia Keys and John Legend. The audio cassette format contains the “explicit” versions of the songs, releasing them the way they were originally intended to be heard. For some, the cassette format may seem a little dated, but it’s exactly how Miranda wanted the record to be released.

All the hits are here, as well as a few newcomers. The “Cabinet Battle 3” and “Valley Forge” demos, which were cut from the musical, make a triumphant return. “Cabinet Battle 3” — sung by Miranda himself — is arguably one of the album’s highest points.

The Hamilton Mixtape Cassette Tape is a great gift for fans of the musical, or old-school music heads who still prefer Walkmans over iPods.

You might not be able to find tickets to the show, but you can still experience the magic of Hamilton through this mixtape. Now if you can only find your old cassette player.