Spy Finds is a weekly series that unveils the coolest, under-the-radar products that you haven’t heard of until now. Each product is curated by our editors who want to help you discover cool finds you didn’t know you needed.

Harman Kardon builds sought after audio equipment. Most of its creations often arrive with very modern, if traditional designs, and sit not so quietly in all of their minimalist glory. Still, every so often, the company trots out a product meant to grab the eye as well as the ear.

Back in 2000, Harman Kardon debuted its SoundSticks. A cooperative design with Apple and its design guru Jony Ive, the unique compact stereo system was designed to match Apple’s iMac G4 Cube and won accolades at the 2000 MacWorld Expo, becoming a must-have item for the combined Mac and Harman Kardon fan. The translucent central unit subwoofer resembled a mix of futuristic hairdryer, fishbowl and popcorn popper. Its smaller mini-tower speakers were also see-through, stacking four smaller tweeters in each. They even earned a place in MoMA’s permanent collection. 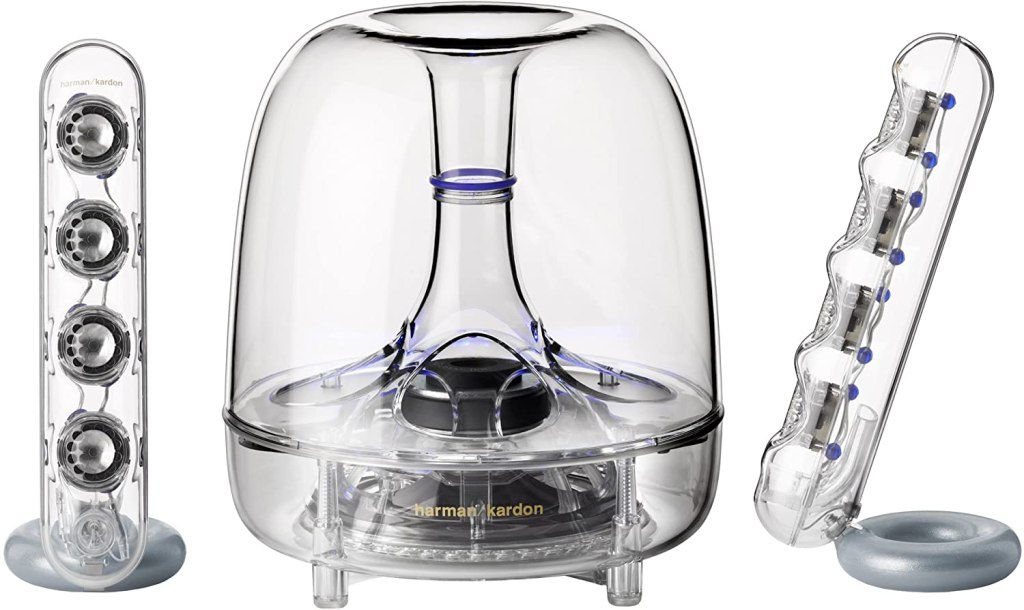 20 years later and Harman Kardon has put out five different versions of its iconic SoundSticks, but that translucent design concept has also branched off into new audio products. One such descendant is the $299 Harman Kardon Aura Studio 3, which incorporates the design DNA and visual flair of the original SoundSticks, but packaged with features which reflect how we listen to music in 2020.

The end result is a work of art — a beautiful Bluetooth speaker that would be a welcome addition to any living space. Best of all, this speaker is backed by the excellence you’d expect from a high-tier audio company like Harman Kardon. 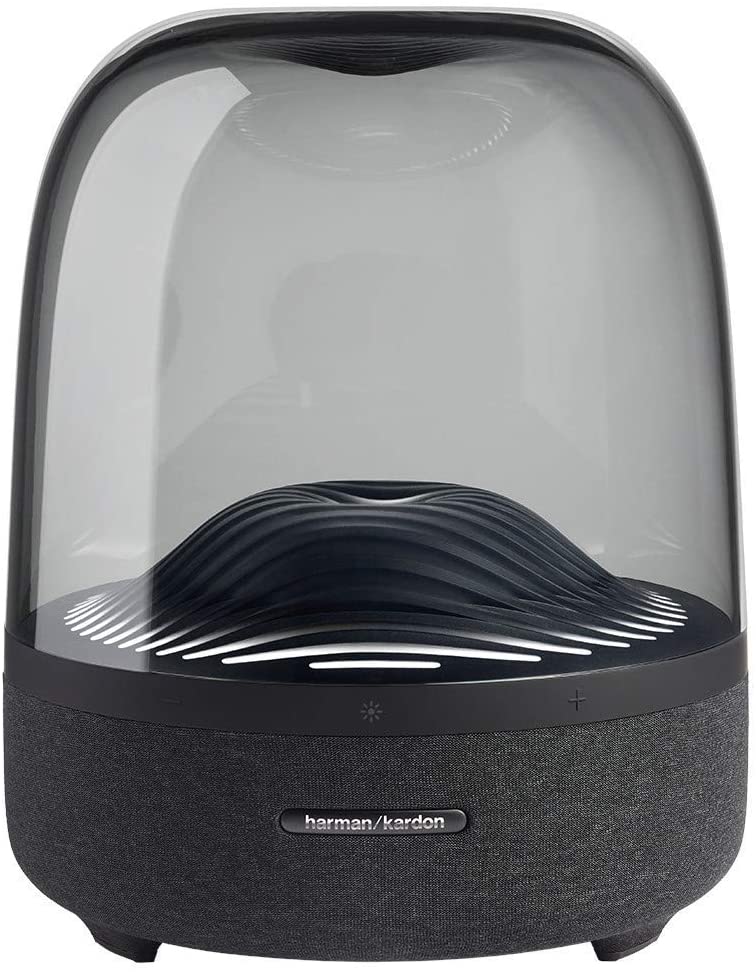 What We Liked about the Harman Kardon Aura Studio 3

The Bluetooth Aura Studio 3 puts out 100 watts of strong, mid-high range sound — more than enough to handle any genre of music in any room. Its circular design sends that sound out in 360 degrees, while the subwoofer installed in its tabletop frame provides ample bass to anchor that mid-high range playback. Its shape, onboard power and engineering allow it to put out a music experience most Bluetooth speakers would struggle to match. 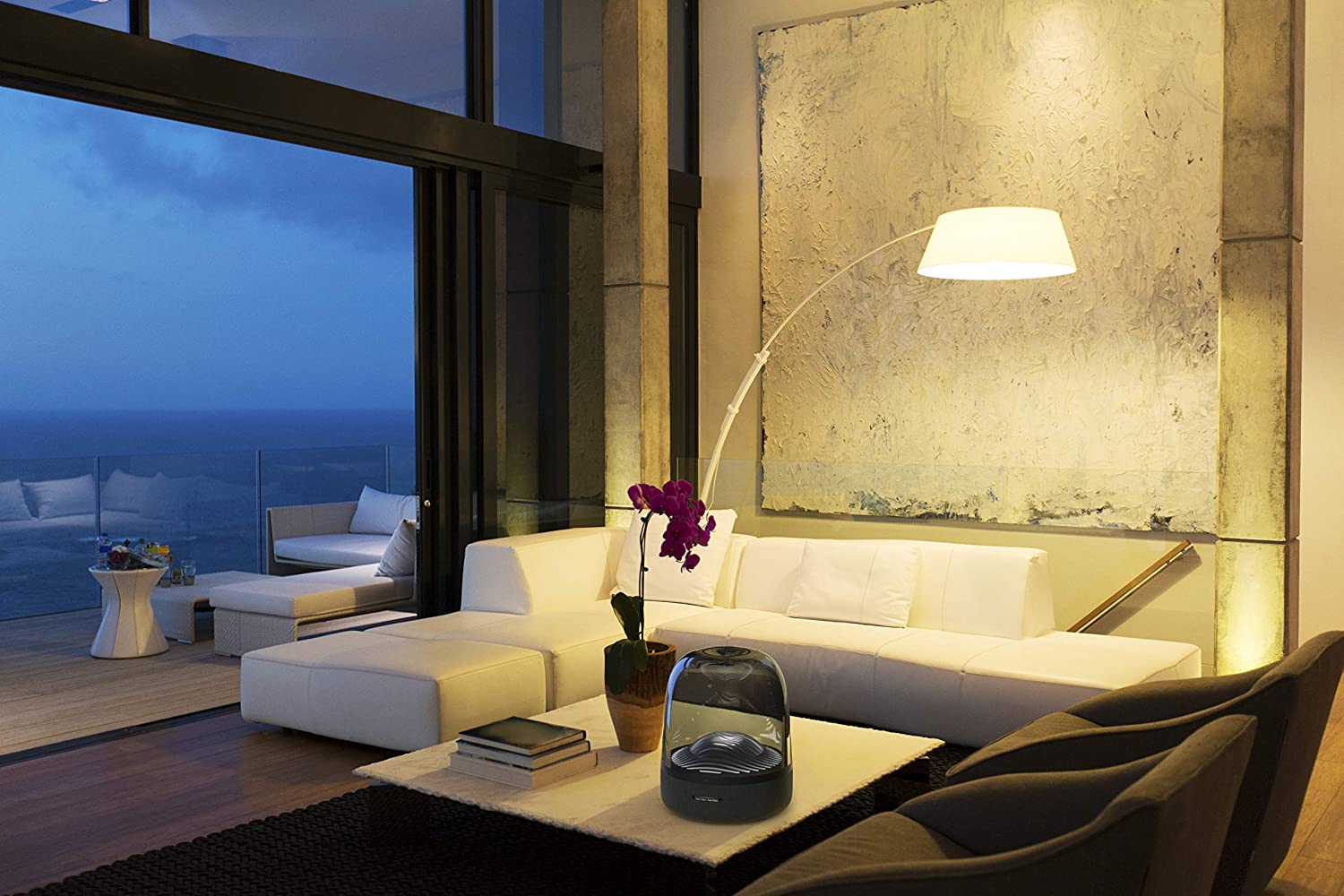 The visual elements of the Aura Studio 3 sell themselves. The device settles right on the edge between aggressively futuristic and elegantly graceful. With the push of a button, the Aura’s added, gentle ambient light effects emanating from the center of the speaker add a warm, mellow feel to its surroundings — making it a complete audio-visual fixture in whatever room plays host to music.

The Bluetooth speaker market is full of great products, but this design is truly a work of art.

Like money and love, you can’t take it with you. The majority of Bluetooth speakers are rechargeable, therefore very portable. Partly because of its size and aural power, the Harman Kardon Aura Studio 3 must be plugged into a wall at all times. While you can move it from room to room, outlet to outlet, it can’t play on the fly. It’s designed to serve as a stationary sound system for a precisely chosen home environment.

The Verdict: Beautiful-looking, great-sounding addition to any room

They say looks will only take you so far, but the unique visuals of the Harman Kardon Aura Studio 3 play a major role in its appeal. Its appearance gives it that “aura” in its nomenclature, lending a room a touch of modern style while it fills the space with bass-rich sound. While by no means cheap at $300, it’s still well within reach of most consumer audio budgets. Its playback quality allows the Bluetooth device to serve as any room’s — or any home’s — primary sound system. 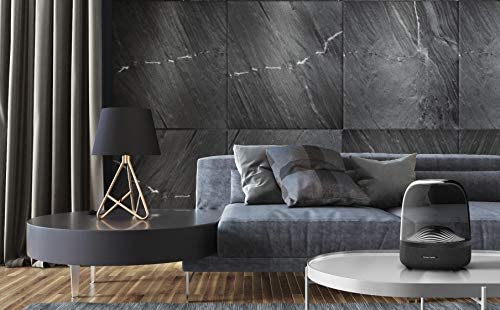