The best way to broaden your horizons (and your screens) is with an HDMI splitter, which allows you to broadcast from a single source to a number of TVs or other devices. Before picking up an HDMI splitter, it’s important to first note the distinction between a splitter and a switch. They have similar names, but they perform opposite functions.

A splitter takes in one source and sends it to different devices. The most obvious setting for an HDMI splitter would be a place like a sports bar. If you’re trying to stream the same game on multiple TVs, an HDMI splitter is a cost-effective way to do that. You can do the same thing if you live in a larger home and want to have the same thing playing in the living room and game room, for example.

A switch, on the other hand, allows you to plug multiple devices into your TV, eliminating the need to constantly adjust a tangle of cables. A standard HDTV typically has one HDMI input, two if you’re lucky, but with an HDMI switch, three or more devices can be plugged in at one time, giving users the option to switch between units without having to plug, unplug, and repeat.

For example, say you want to connect a Blu-ray player, game console and cable box to your TV. An HDMI switch makes it easy to keep all three units connected at the same time, enabling you to plug in and relax. The easiest way to tell a switch and splitter apart is by looking at the ports. If it has multiple ports and most of them are inputs, then you have a switch on your hands. If most of the ports are outputs, it’s a splitter.

Both splitters and switches can be useful, which is why we’ve included both below.

If you’re looking for a splitter (and not a switch) then consider this option from OREI. It has four outputs and one input, so you can share one image between multiple TVs or computers. It’s also HDCP compliant. The splitter also supports 4K signals, so you can stream high-quality audio between different TVs. It also supports different audio formats like Dolby TrueHD. You can also choose two outputs and eight outputs. 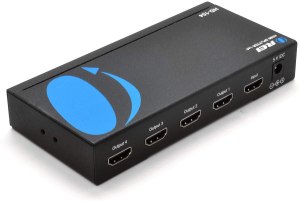 Techole’s HDMI splitter works in 4K and requires no additional power source to operate seamlessly. Simply press a button to switch between different high-res inputs and LED lights clearly identify which one is active on your television. It’s got aluminum alloy construction that’ll hold up through extensive use and it’s got stable and fast transmission you can depend on. It supports high-resolution 4K screens and high-quality audio as well.

Pros: Easy to set up and use, supports high-quality video and sound. 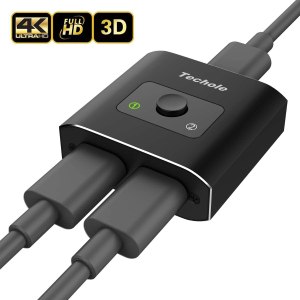 This simple HDMI splitter has one input and four outputs, and the LED display indicates power and the status of each port. It’s widely compatible and can support resolution up to 1080P. It’s also designed to be easy to use, and the compact size means you can set it up just about anywhere. 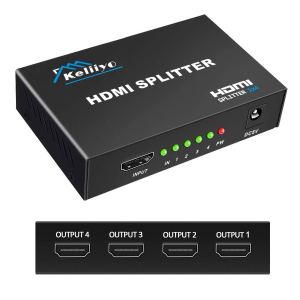 Optimize your home theater and entertainment setup with this premium HDMI splitter from J-Tech equipped with 4K and ultra HD capabilities. It’s compliant with HDMI 2.0 specifications meaning it’s got updated technology so you can view everything from your Blu-ray player to HDTV in uninterrupted high definition. It supports hot plug-and-play so you can get up and go as soon as you get it and it’s got LED lights that signal functionality and power mode.

Cons: Higher price point than other options. The average user likely doesn’t need more than four HDMI ports at once. 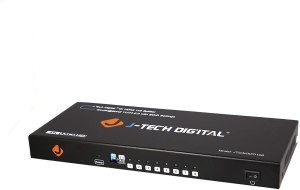 While many of the options on this list are HDMI to HDMI, this adapter, from Anker, is a little different. It has a USB-C cable that allows it to plug into a variety of devices including Macbooks and tablets, and you can either mirror or stream content to dual monitors. It’s worth noting that for Macs, you can only mirror, which may be a limitation depending on what you’re doing. In that sense, it won’t always operate as a true splitter.

Cons: Limitations with Macs — can only mirror. 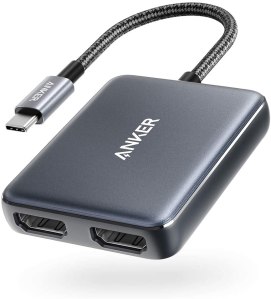 This option confusingly lists itself as both a switch and as a splitter, but it’s actually a switch. You can plug in multiple devices such as media players and consoles and connect them all to your TV. There are a total of five inputs, making it a great option for anyone with a lot of devices. A remote control is included so you can toggle between different devices.

Pros: Includes remote control. Has five inputs, making it a good option for anyone with a lot of devices.

Cons: IR remote, so it requires a line of sight. 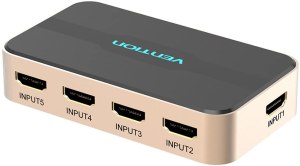 If you have a lot of devices to broadcast to, this splitter from OREI allows you to split from one source to up to eight outputs. That makes it a great option for events, sports bars or other business uses. The lighting panel on the back of the unit lets you know which ports are active.

Pros: Eight outputs, making it a good option for business use.

Cons: No remote, so splitter will need to be placed within reach during setup. 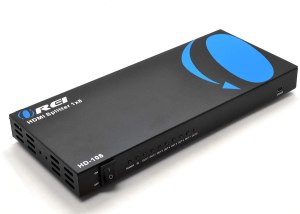 If you’re looking for a switcher for your media stand, this option from SGEYR allows you to plug in up to five devices. That means that it’s great if you have several consoles and media players. A convenient remote is included that allows you to toggle between sources. It can support 4K devices as well.

Cons: Automatic switching to powered on devices can be annoying. 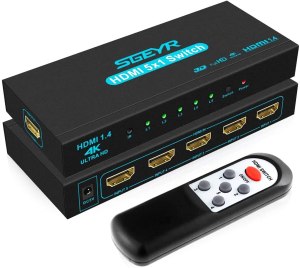 9. Avedio links HDMI Splitter 1 in 2 Out

This option is a good pick for small-scale uses, such as desktops with dual monitors. It duplicates the image, so it’s best for anyone who wants a mirrored image on two monitors or TVs. There are two outputs and one input, and the small unit is space-saving.

Cons: Not ideal if you want two different images. 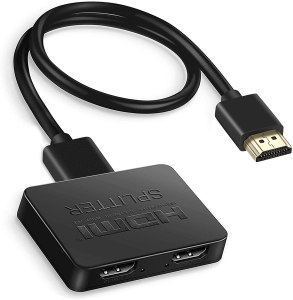 Image Courtesy of Amazon
Buy: Avedio links HDMI Splitter 1 in 2 Out $12.99
buy it

If you’re looking for an option for your computer, this adapter allows you to connect your laptop to HDMI devices such as TVs and computer monitors. It features a USB connector that’s compatible with Apple’s Thunderbolt ports, and, with two outputs, you can display your content onto two different screens. It supports 4K as well.

Cons: Doesn’t work with all USB-C devices. Check compatibility on the listing. 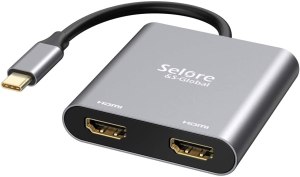 This affordable HDMI switch is a good option if you only have a few media devices that you want to connect to your TV. It has one output that plugs into the TV or monitor, and two inputs for devices such as media players and gaming consoles. It has a button on top to switch between different sources.

Pros: Affordable and compact. Easy to set up. 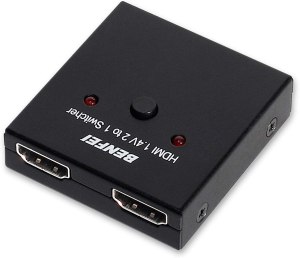 If you have a lot of devices but too few ports, consider this option from Totu. There are four HDMI inputs, allowing you to plug in media players, gaming systems and streaming devices like Roku or Chromecast. It’s also a convenient option because a remote control is included, allowing you to quickly toggle between your different devices. It’s also compact, so it won’t take up too much space on your media stand.

Cons: This is a switch, not a splitter, so if you’re looking to split a signal, you may want another option. 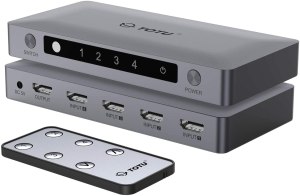 This HDMI splitter from GANA is equipped to handle three different HDMI devices seamlessly and easily through its convenient ports and built-in key-press-switching function. This kit includes one 1/8ft HDMI cable so you’re ready to plug and play as soon as you get it. For a fraction of the price of the best HDMI splitters, you can have all of this functionality and more money left to spend on games, DVDs and other gadgets.

Pros: This HDMI splitter from GANA sports a lower price point than other options along with three different ports for supporting your devices.

Cons: Only supports three devices at once. 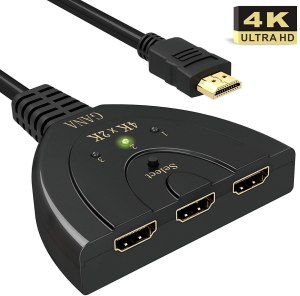