Hisense officially announced its 2022 lineup earlier this year during CES 2022, but we finally got our first look at some of the new models during a special, intimate event hosted by the company last week. Even though they’re not available for purchase just yet, you won’t have to wait long for these impressive 4K HDR ULED Smart TVs because they’re anticipated for release this summer. We came away from the event impressed that they all continue to follow the tradition of offering impressive specs with affordable prices, which are gunning to be some of the best TVs you’ll find this year.

What We Love About the Hisense U8H Series

Out of the bunch we got to check out up close and personal, it was the Hisense U8H Series that captivated us the most because of its amazing image quality, vibrant colors and Mini-LED technology. Available in 55, 65, and 75-inch models, the Hisense U8H also impressed us with its peak brightness of 1500 nits. Seriously, it was the brightest thing in the entire room and easily commanded attention over everything else. It’s the kind of TV that’s perfect for watching action movies in home theater fashion thanks to its HDR 10+ support and 120Hz refresh rate for ultra-smooth motion.

Beyond that, we also love that it features hands-free voice control with Google Assistant. In fact, you could say that it has the same functions as a smart speaker because of this. Most importantly, you should know that all three models will be priced under $1,500. Now that’s an incredible value. 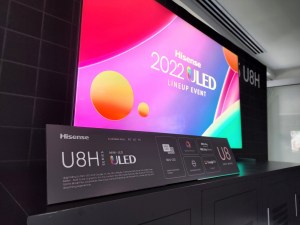 What We Love About the Hisense U7H Series

As you’d imagine, Hisense’s naming conventions for its TVs are slightly easier to understand — unlike some other manufacturers that have no logic. The Hisense U7H Series is a step below the U8H, but still packs impressive qualities that seem promising for gamers. In particular, we were told about its Game Pro Made, which optimizes the TV’s settings for improved latency and image quality.

Gazing at the Hisense U7H during the event, it’s making a serious play at being one of the best 65-inch TVs because it still exhibited strong brightness, even though it’s a smidgen less at 1,000 nits. However, it was still accompanied by saturated colors with excellent viewing angles. We didn’t notice too much distortion at wide angles. Packing the same Google TV experience as the U8H Series, you’ll have access to Google Assistant at all times. Available in 55, 65, 75 and 85-inch models, the options make it perfect for any room, especially when pricing starts at $799.99. 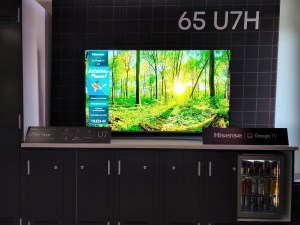 What We Love About the Hisense U6H Series

The last Quantum 4K ULED smart TV we looked at during the event was the Hisense U6H Series. Sure, it didn’t have the same visual masterpiece as the other two televisions, but it’s still worth consideration because of its screen-size-to-price ratio. Pricing starts at $579.99, with options for 50, 55, 65 and 75-inch TVs to choose from. If you’re on a tight budget, but don’t want big compromises, the Hisense U6H Series still has some big features such as the Google TV experience, 60Hz refresh rate, Dolby Vision IQ and HDR 10/10+ support. No question, it’s going to be an affordable flat screen TV to consider. 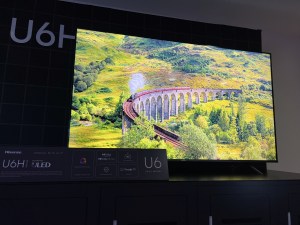 What We Love About Hisense L9G 100-inch 4K Laser TV

Technically released in 2021, the Hisense L9G 100-inch 4K Laser TV was the last thing to catch our attention at the special event. That’s because it’s not often that the average consumer would come across a 100-inch TV.

Hisense’s L9G Laser TV is in fact a short-throw projector, but one that manages to exhibit the qualities of its other TVs. The problem with most projectors is that they lack the same peak brightness as ordinary TVs, as well as noticeable color distortion. However, we didn’t see any of that with the Hisense L9G while it was projecting onto the wall. Not only was the 4K picture crisp and detailed, but we were astounded by how it managed to retain its iridescent colors.

We know how much of a hassle it could be to wall mount a TV, especially a 100-inch model, but since this is a short-throw laser TV, it’s much simpler and more convenient to set up. 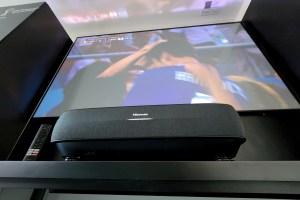 As much as we’re dying to check out the new lineup for ourselves, there are some incredible deals going on right now with last year’s models. They’re still capable smart TVs that blend impressive qualities with affordable prices that are easy on any budget. Hisense as a whole has been establishing itself as a strong player in the space, offering some of the best 75-inch TVs on the market. 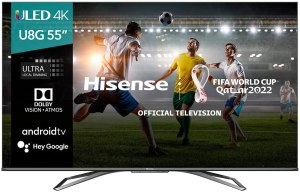 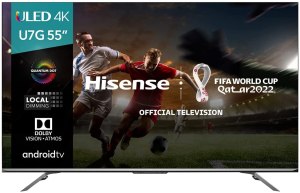 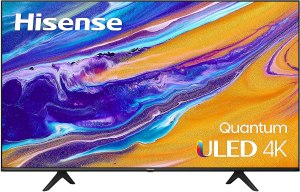