Buying a new TV doesn’t always have to cost astronomical amounts of dough. A step below top names like Samsung, LG, and Sony are the mid- and entry-level titans of affordable flat-screen TVs, with respected names like Vizio, TCL, and the focus of today’s review, Hisense.

Seeing a prolific rise in the world of budget-priced sets, Hisense produces bright and powerful LED sets with respectable specs and a medley of awesome features to round out the user experience.

New to 2022, I was able to play around with the 65-inch Hisense U6H TV, and I walked away from my weeks of demoing a mostly satisfied man. Read on to find out why.

The Hisense U6H: At a Glance 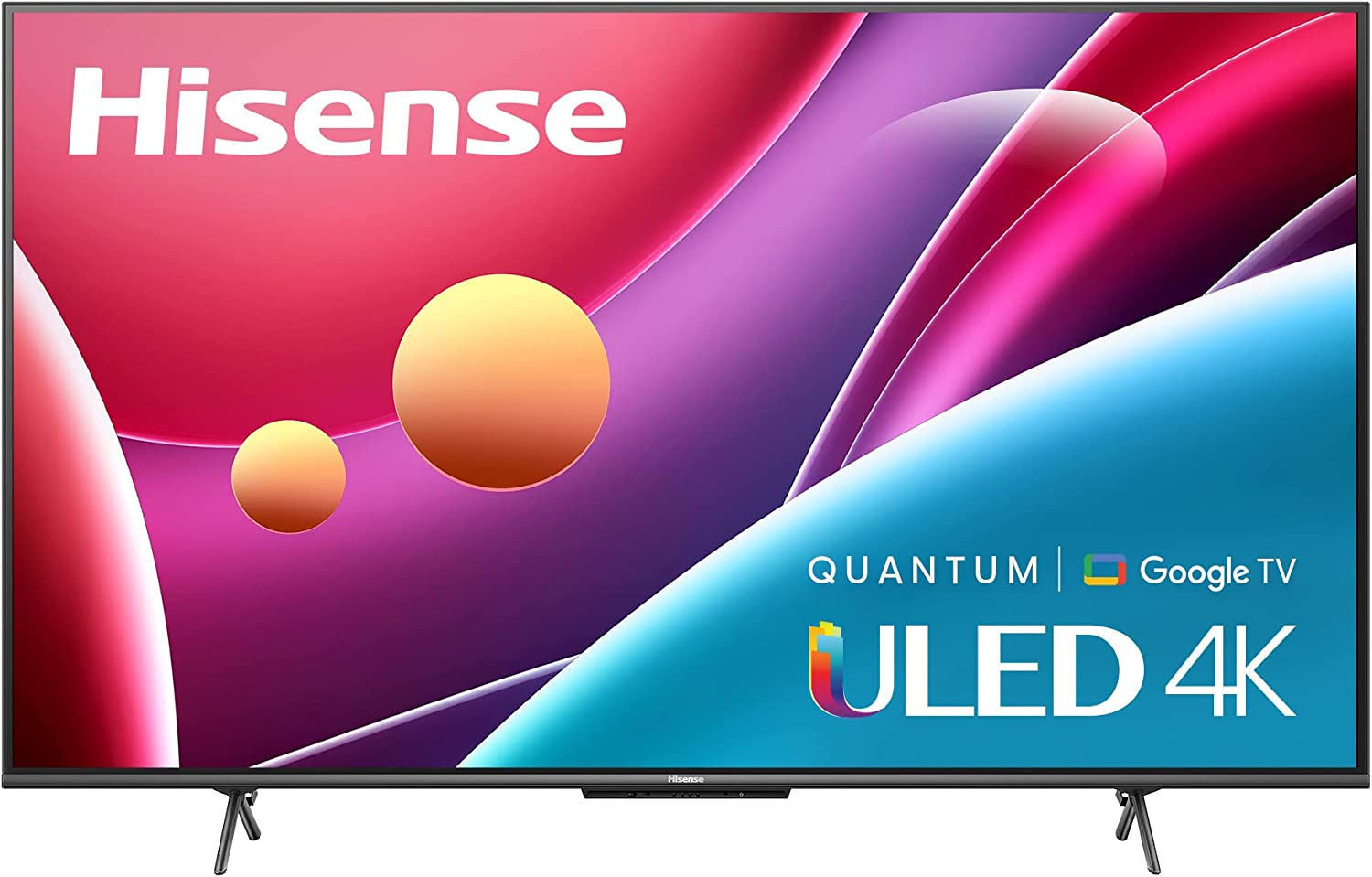 The Hisense U6H builds upon the incredible performance of the 2021 U6G series, delivering astonishing brightness, colors, and contrast at a budget cost. But in terms of overall capabilities, this is an incredibly performing set that can easily go toe to toe with more expensive models from the likes of Samsung, Sony, LG and more.

The U6H (like pretty much any larger TV you’ll buy these days) features a 4K screen and a native refresh rate of 60Hz across all inputs and internal sources. Utilizing full-array LED lighting with local dimming and quantum dots for expanded color gamut, the U6H is built to handle several of today’s leading HDR formats, including HDR10, HDR10+, Dolby Vision and HLG.

In terms of inputs, the U6H is equipped with four HDMI 2.1 inputs, one of which is an eARC input/output for sending audio from the TV into a compatible sound system. There are also two USB 2.0 inputs, a digital optical output, a single set of RCA inputs, an analog audio output and an RF coaxial input.

What We Liked About Hisense U6H

The U6H is a force to be reckoned with regarding overall picture quality. Running my 65-inch through multiple rounds of 4K, HDR and SDR sources, my biggest takeaway is how much punch and kick this screen delivers.

With quantum dots and full array lighting working in perfect unison, the U6H gets incredibly bright. Still, it’s the kind of luminance we’re all looking for: powerful backlighting that bolsters colors and contrast instead of robbing us of sweet picture details. 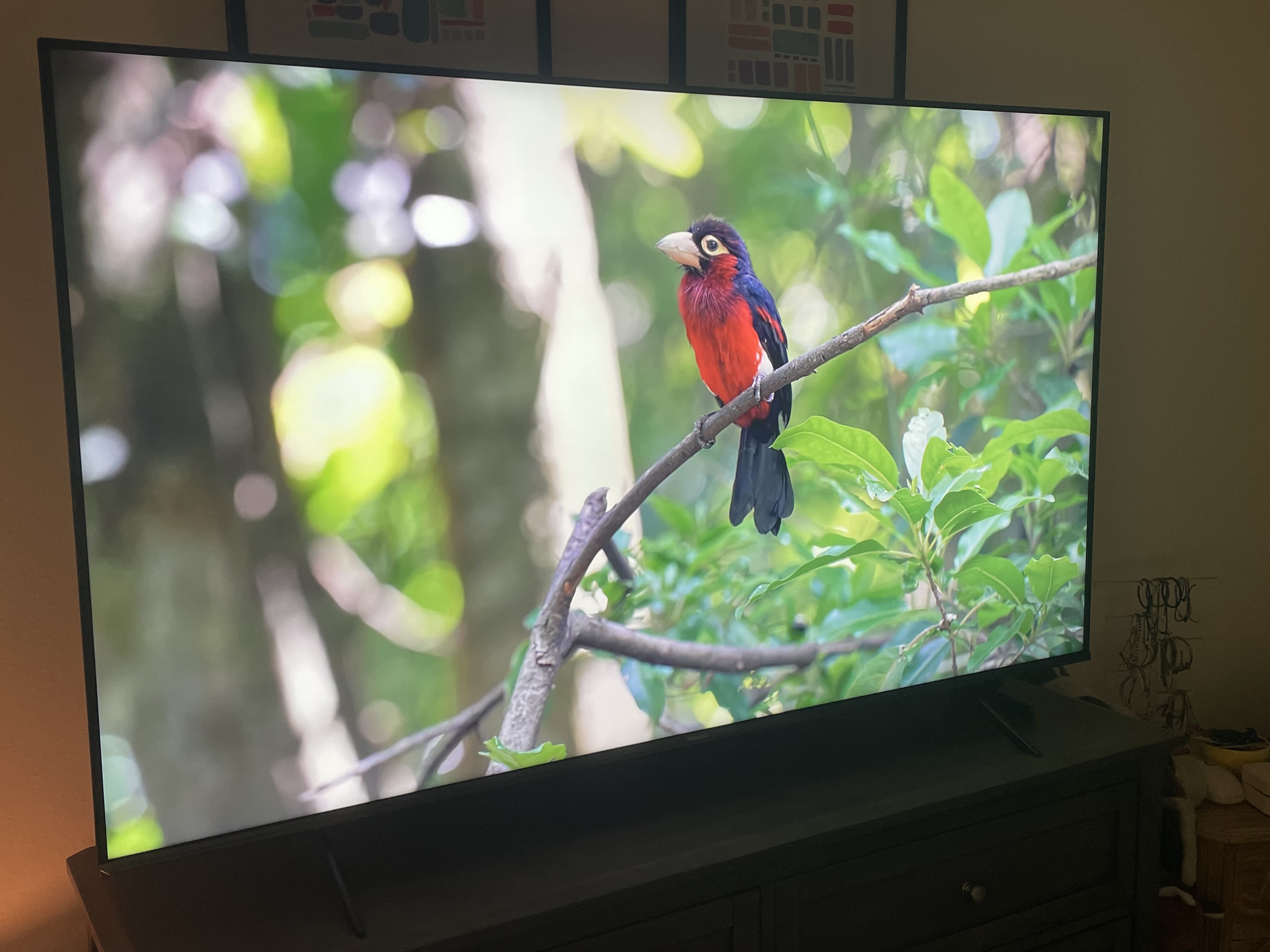 My go-to picture setting for HDR sources was HDR Theater, where the U6H consistently showcased an arresting blend of colors with near-perfect highlights. Throughout my Dolby Vision 4K test source, subjects were always crisp and clear, and overall contrast levels were excellent.

While not quite on par with the inky blacks of an OLED screen, the U6H did everything in its power to act like an OLED, and I found the results pretty astonishing, especially in images like the one below. 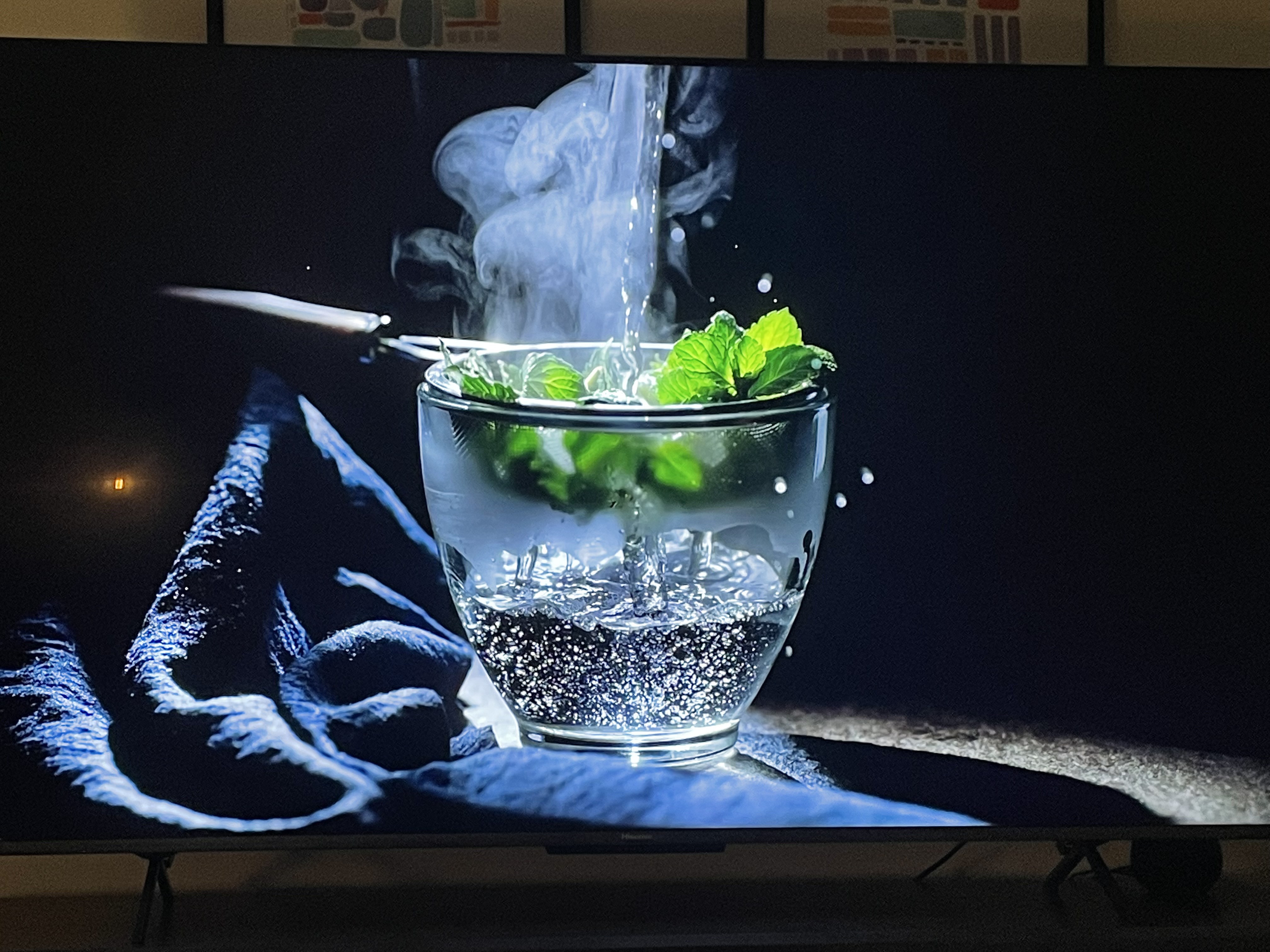 Beyond the picture, the Google TV smart platform delivered one of the most engaging streaming experiences I’ve seen in a TV this year. After merely signing in with my Gmail credentials, it was like I’d been using and customizing my U6H’s web content for months.

A handful of movies and shows I’ve watched and loved were front and center under the “For You” tab, with relevant titles housed neatly in the “Movies” and “Shows” tabs. It’s almost frightening how much Google knows I love horror movies and that I’m currently most devoted to Apple TV+ and Hulu for programming. 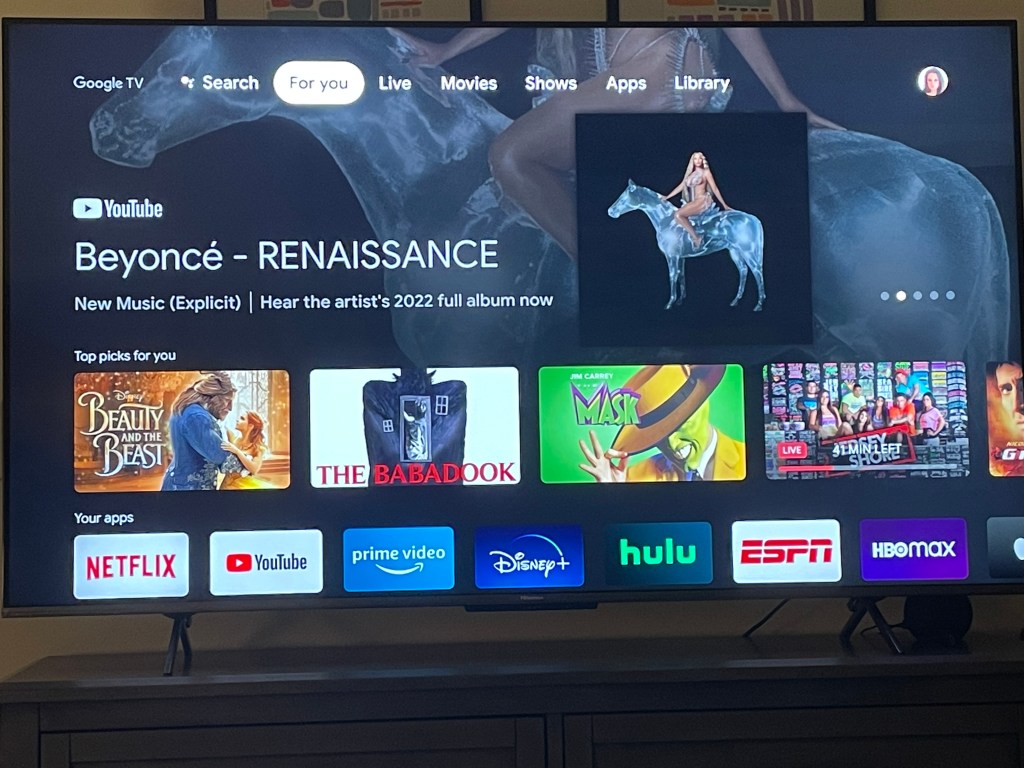 It’s also convenient that you can have multiple Google TV user profiles, so everyone in the household can be recommended the types of content they enjoy the most.

Rounding out the Google TV experience was the readymade compatibility with Google Assistant. While my household doesn’t run off the Google ecosystem (this is an Alexa domicile), there’s a handy Assistant button built right into the TV remote, allowing you to quickly call up your favorite movies and shows, raise and lower volume, change inputs and even control your home’s smart devices.

There’s even AirPlay 2 and Alexa compatibility (you must use a separate Alexa device for controls) for casting and additional voice command skills, like turning the TV on or off and opening and closing apps and games.

What We Disliked About Hisense U6H

Expecting perfection is never the wise way in the world of TVs and, like every model, the U6H is not without its faults.

Everything displayed in native 4K looked great on this set, but the same can’t be said for 1080p content (or lower). While maintaining overall brightness and contrast, image upscaling was pretty weak, with non-4K sources appearing flat and washed out. 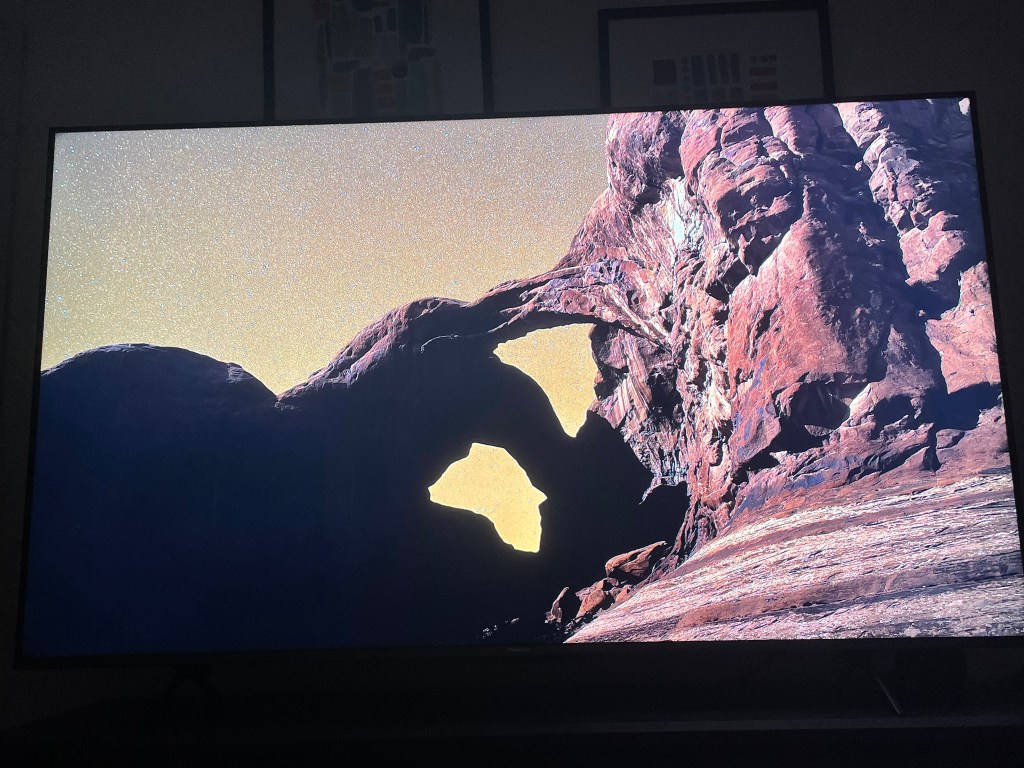 Even toggling through the U6H’s various picture settings didn’t do much to correct this issue, other than throwing in a bit of extra highlighting here and there, which made defects look even worse in most cases.

When viewing standard HD content (and even some 4K sources), I experienced some notable light blooming and a few run-ins with incurable motion blur. While most prevalent when viewing lower resolution imagery, the haloing was prominent enough for me to try and brush it away with whatever noise and image filters I could find in the U6H’s advanced settings, but nothing did the trick.

And while motion blur wasn’t terrible on the U6H, this is a budget TV that only maxes out at 60Hz across all inputs and built-in sources. Judder was prevalent, especially around fast-moving objects and even during some simple camera pans in movies and shows.

That being said, if you’re looking for a TV to maximize your next-gen gaming experience, you should have your eyes on models with a native 120Hz refresh rate to begin with.

I have one more minor grievance to share, and it’s about the remote. It works fine, it’s easy to hold, but it looks old — almost like it belongs to a TV made five or six years ago instead of 2022. I think this has more to do with the budget tiering, but if there was one thing to remind me that I was using a lower-cost set, the remote was undoubtedly it.

The Verdict: Should You Buy Hisense U6H?

So is the Hisense U6H worth it? Absolutely.

The Hisense U6H is an exceptional budget TV from a reliable brand that often looks and performs like a higher-priced set. Overall picture quality gets two solid thumbs-up across the board, and the Google TV platform is an intuitive and user-friendly way to experience the world of smart TV content.

While this may not be the best choice for regular gamers or 4K cinema fanatics, if you’re looking to save a few bucks while maxing out the size of your next living room screen, look no further than the Hisense U6H.

The Hisense U6H is still rolling out to major retailers, but you can currently buy the set from Amazon, Best Buy, Walmart and Hisense directly.

We Found 20 Actually Stylish TV Stands for Your Living Room