Not so long ago, the idea of a smartwatch or any other sort of wearable tech product seemed like something out of Blade Runner or The Jetsons. Now, a quick Google search for ‘wearable tech” yields more than 200 million results, with the sponsored section offering a number of direct product links to things such as fitness trackers or Apple Watches. Safe to say: the future is now.

That being said, a lot of wearables have been hailed as groundbreaking devices that would change mankind’s relationship to technology — and most of these products failed. Remember Google Glass?

Unfortunately, many wearable products are simply too expensive or too weird for a mass audience. That’s why Kickstarter has become a testing ground for new wearables. Case in point: the Norm Glasses from Human Capable.

The chart-topping project came to our attention while looking at Bluetooth sunglasses, but these glasses aren’t your typical Bluetooth sunglasses. While the Norm Glasses look like your standard, Wayfarer-style shades, they’re actually AR glasses. AR stands for augmented reality, which refers to lenses or screens that project graphics, text and information over the real world.

The Norm AR glasses contain a fully functioning microcomputer. That’s a fancy way of saying they’re basically like an Apple Watch on your face: You can make calls, take HD photos and video, get visual turn-by-turn directions and even listen to music and videos — and you can do it all while wearing a stylish pair of sunglasses.

At a weight of 36 grams, the Norm AR glasses won’t cause your face any discomfort, as they weight about as much as your standard part of sunnies. Additionally, the battery takes about two hours to charge and then has you set for four days worth of use. Plus, if you want to play audio while you run, they’re sweat-resistant, which will help on especially warm days. Just pair the shades to your mobile device via Bluetooth and you’re off to the races.

The Norm is still currently in pre-order for a July 2020 release, but for those who aren’t quite convinced yet, Human Capable just won a CES 2020 Innovation Award for “Best Innovation” in the Headphones & Personal Audio category. We were already excited about what the future may hold for us in terms of wearables, but it’s safe to say that Norm has us salivating for the endless possibilities that are in store for our not so distant future. 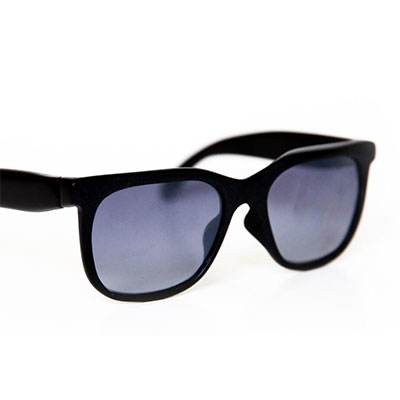 Style Meets Functionality With 9 of the Best Bluetooth Sunglasses Around