Whenever it seems like we’re getting to a point where we can not only make sense of the latest display technologies, but also actually afford them, a new slew of features crop up to steal our attention. And following in the wake of curved monitors, 144 Hz gaming monitors and 4K monitors, we’re getting a taste of a new type of computer display: the best mini-LED monitors.

But more than just a futuristic name and some marketing hype, mini-LED monitors are shaping up to be one of the biggest leaps forward in display technology since 1080p and 4K resolutions made their way into computer screens. And more importantly, it will also help unlock the full potential of HDR and Dolby Vision in monitors, a technology that has thrived in the TV space, but has played a secondary role when it comes to monitors.

For the full ins and outs of mini-LED technology, you can read our guide to mini-LED here. But as the name implies, mini-LEDs are shrunken down LEDs that are used as the light source in a flatscreen display panel. Because they’re smaller, you can fit more of them behind a screen, which in turn allows for more local dimming zones. And with more dimming zones comes the ability to get more specific about which parts of the screen are illuminated and which ones aren’t. And because you’re not lighting unnecessary parts of the screen, you can make the areas you want to illuminate brighter than ever before. This is key for HDR and Dolby Vision, which relies on peak brightness to really make content pop.

Why Do I Want a Mini-LED Monitor?

In general, mini-LED monitors represent a step up in image quality, and the difference in picture quality and detail will be immediately noticeable. But because this is such a new technology, it’s expensive to create these displays. As a result, there are still only a few options available when it comes to mini-LED monitors (with more on the way) and they’re primarily geared towards two groups: creative professionals and gamers.

If you’re a creative professional, such as a designer, photographer or video editor, mini-LED monitors will not only reveal details that you’ve never seen on a digital display before thanks to HDR, but they’re also some of the most color accurate displays ever created.

And if you’re a gamer, the increased brightness and HDR effects you will get from games which take advantage of this tech will have the games you play popping off the screen and looking better than you’ve ever seen them.

What Should I Look for in the Best Mini-LED Monitors

When it comes to the best mini-LED monitors, many gamers and creatives will be looking for different features in their displays. While gamers will be in search of G-Sync support and a refresh rate above 120 Hz, creatives will be looking for Delta E values under 1 and near-complete coverage of color spaces such as Adobe RGB. But in general, the best mini-LED monitors tend to have:

With this in mind, we’ve surveyed the landscape and put together a list of the best mini-LED monitors that are not only currently available, but also ones that are set for a 2021 release.

If you want the most versatile and best mini-LED monitor money can buy, then you want the ASUS ProArt Display PA32UCX-PK. With 1152 local dimming zones and a peak brightness of 1200 nits, this 32-inch, 4K display is a creative’s dream. Equally adept at handling professional photo or video work that depends on color accuracy, this display can cover 99 percent of the DCI-P3 space, 99.5 percent of the Adobe RGB Space and has a Delta E value that’s less than one, meaning that any inaccuracies aren’t perceptible to the human eye when the monitor is properly calibrated. On top of that, this display supports Dolby Vision, which means that it’s more than equipped for accurately reproducing HDR content. And for those of you who want total control, the ProArt Display PA32UCX-PK has a dedicated calibration chip that is built to work with most major calibration software, including Calman. 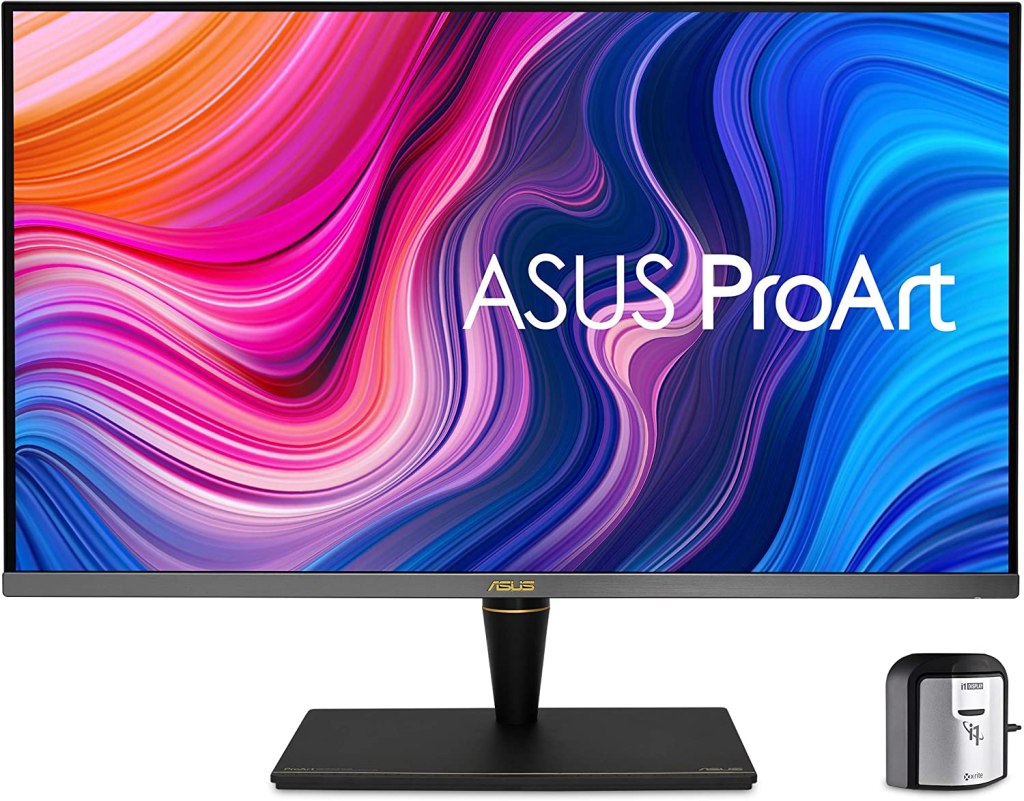 If you’re looking for the best mini-LED monitor that’s geared slightly more towards video editing and color grading than graphic and photo work, the Dell UltraSharp 32 HDR PremierColor Monitor (U3221Q) is the pick for you. While this 32-inch, 4K monitor gets slightly less bright, only generating 1000 nits of peak HDR brightness, it features more than 2000 local dimming zones, covers 99.8% of the DCI-P3 color space and features built-in Calman calibration tools. This monitor even lets you display two different sources at once using picture-by-picture, and you can even show each source in separate color spaces. 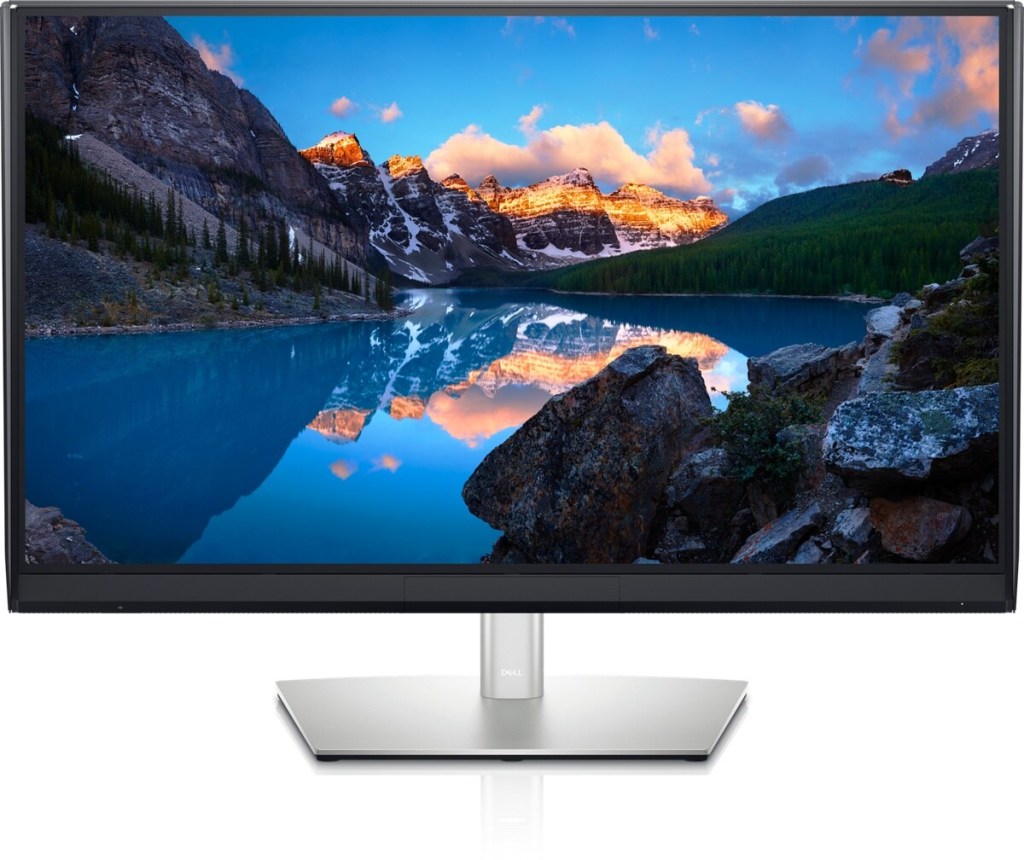 If you’re looking to save some money, you don’t have to compromise much to get one of the best mini-LED monitors under $3000. The Asus ProArt Display PA27UCX-K is largely the same monitor as our top pick, save for a few key differences: It has a smaller 27-inch panel, has half as many dimming zones (576), has a lower peak brightness of 1000 nits, and it’s a little less accurate for video (only covers 97 percent of the DCI-P3 color space). However, there’s still plenty to love here. It still has 4K resolution, Dolby Vision support, all the same calibration tools as its bigger sibling and a Delta E value under 1. And considering that you’ll be saving more than $1000 by opting for this monitor, the minor step down in performance might just be worth it for many of us. 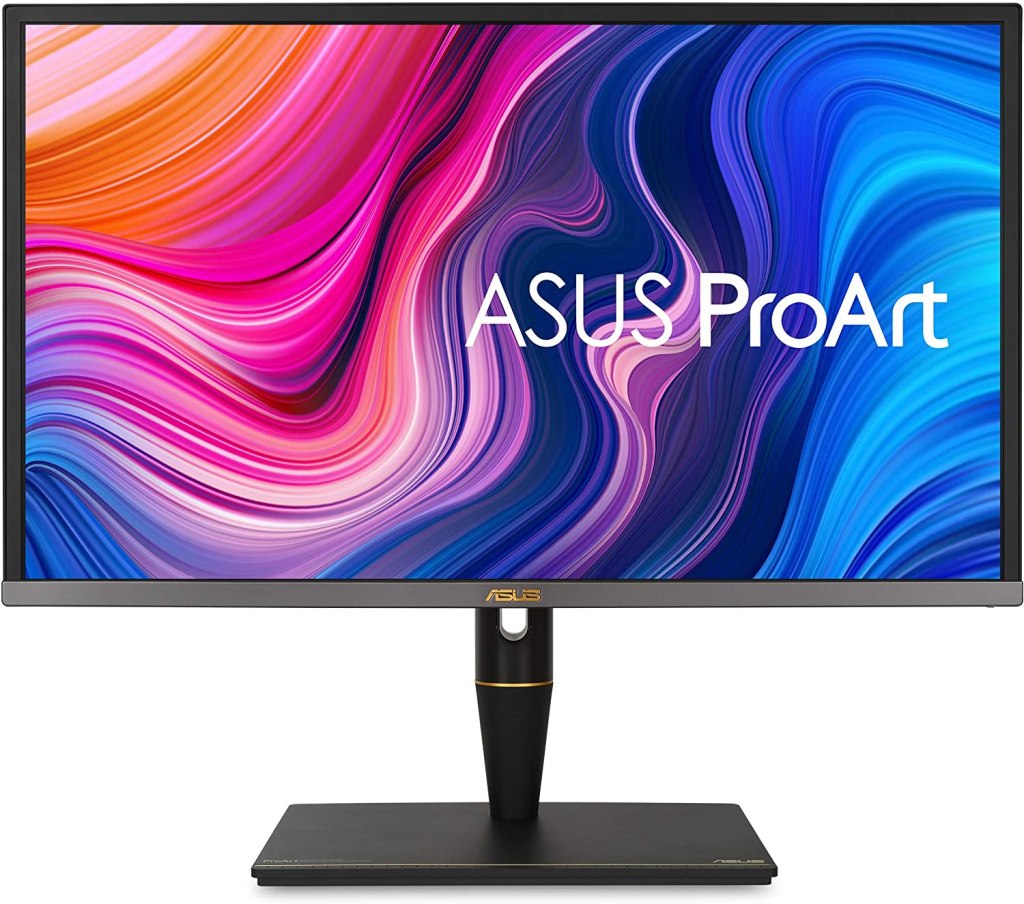 The Asus ROG Swift is the world’s first gaming monitor, and as a pioneering piece of technology, it doesn’t disappoint. This 4K display is capable of generating 1400 nits of peak HDR brightness thanks to its 1152 local dimming zones. When combined with NVIDIA G-Sync Ultimate and a 144 Hz refresh rate, you’re going to have a picture that is smooth, responsive, detailed and vibrant. While this might be slightly less bright that the brightest mini-LED monitors, the higher refresh rate is worth the sacrifice given the bump in refresh rate. 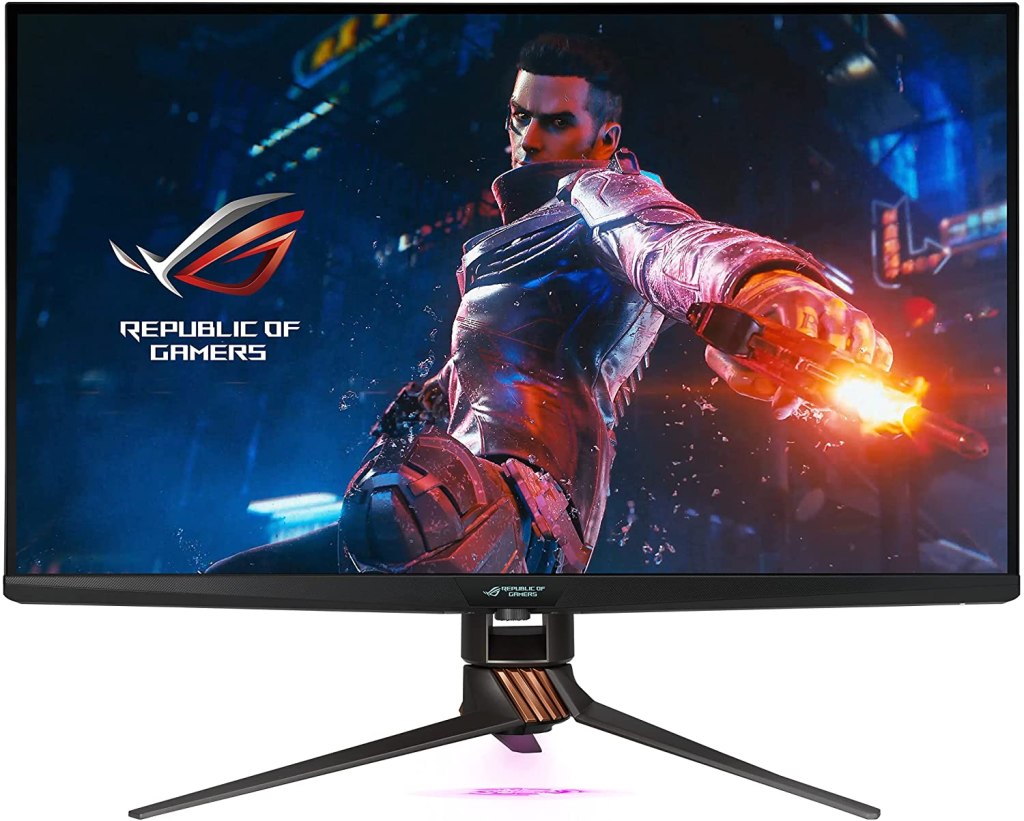 While the Apple Pro Display XDR isn’t technically a mini-LED monitor (it only has 6-nanometer LEDs instead of 1-nanometer ones and fewer lighting zones than you get from other mini-LED monitors), this is absolutely a display that fills the same needs as the other options on this list. And given the relatively few options currently available, it’s a top option for serious professionals who work with Macs and need a monitor capable of serious brightness. With a resolution of 6016×3384, this 32-inch display has a pixel density of 218ppi and 576 local dimming zones, which gives it a peak brightness of 1600 nits. And while the Pro Display is capable of incredible quality at its best, it reportedly has some issues with contrast and color accuracy when viewed at an angle. And be warned, that $4999 price tag does not include a monitor stand: If you want Apple’s official Pro Stand (pictured), it will cost you an additional $999. 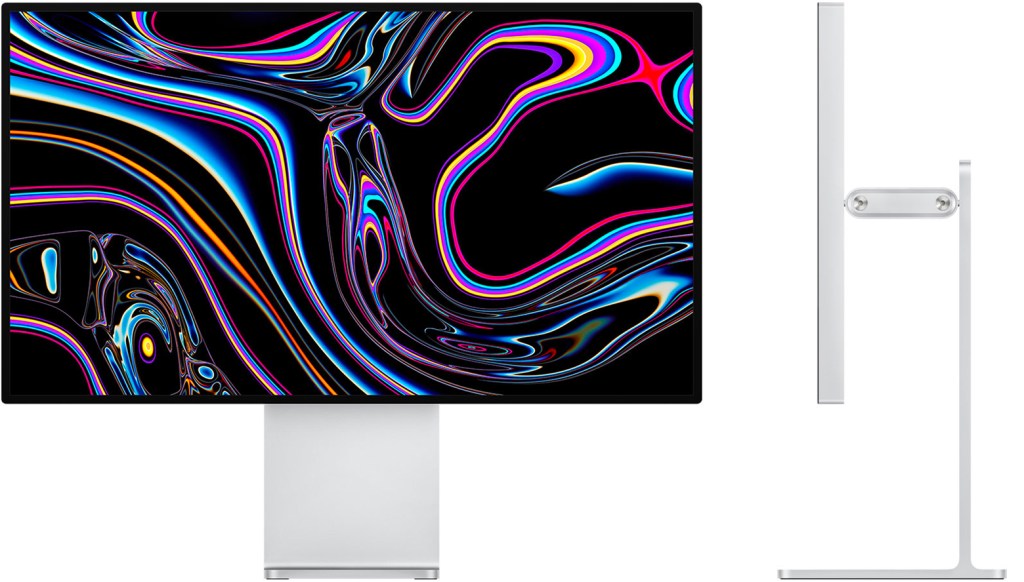 Asus might sit atop the mountain when it comes to the best mini-LED monitors, but the company isn’t content to sit back on its laurels. Coming soon is Asus ProArt Display PA32UCG-K which promises to be one of the first mini-LED monitors to offer both a 120Hz refresh rate and a peak brightness of 1600 nits (thanks to more than 1100 local dimming zones that can generate a peak brightness of 1600 nits. As such, the ProArt Display PA32UCG-K will look to build on the performance of the 60 Hz PA32UCX-K which includes covering 98 percent of the DCI-P3 color space and 85 percent of the Rec.2020 color spaces for video editors, along with 99.8 percent of the Adobe RGB and 100 percent of the SRGB color space for photographers, illustrators and designers. Asus might be the first company to release a gaming mini-LED monitor, but that won’t be the case for long. Viewsonic is set to release the Elite XG321UG mini-LED gaming monitor which, just like the ROG Swift, will offer 1400 nits of peak brightness and 1152 local dimming zones to go with 4K resolution and a 144 Hz refresh rate. While details on price have yet to surface, it has been tentatively set to hit store shelves this summer. Much Like the Asus ProArt Display PA27UCX-K, the Lenovo ThinkVision Creator Extreme is shaping up to be another budget-oriented mini-LED monitor that can still deliver the goods. Promising a peak brightness of 1200 nits and 576 dimming zones to go with a 27-inch screen size, 4K resolution and professional-grade performance. Not yet available in the U.S. we’re expecting it to hit shelves some time in 2021. 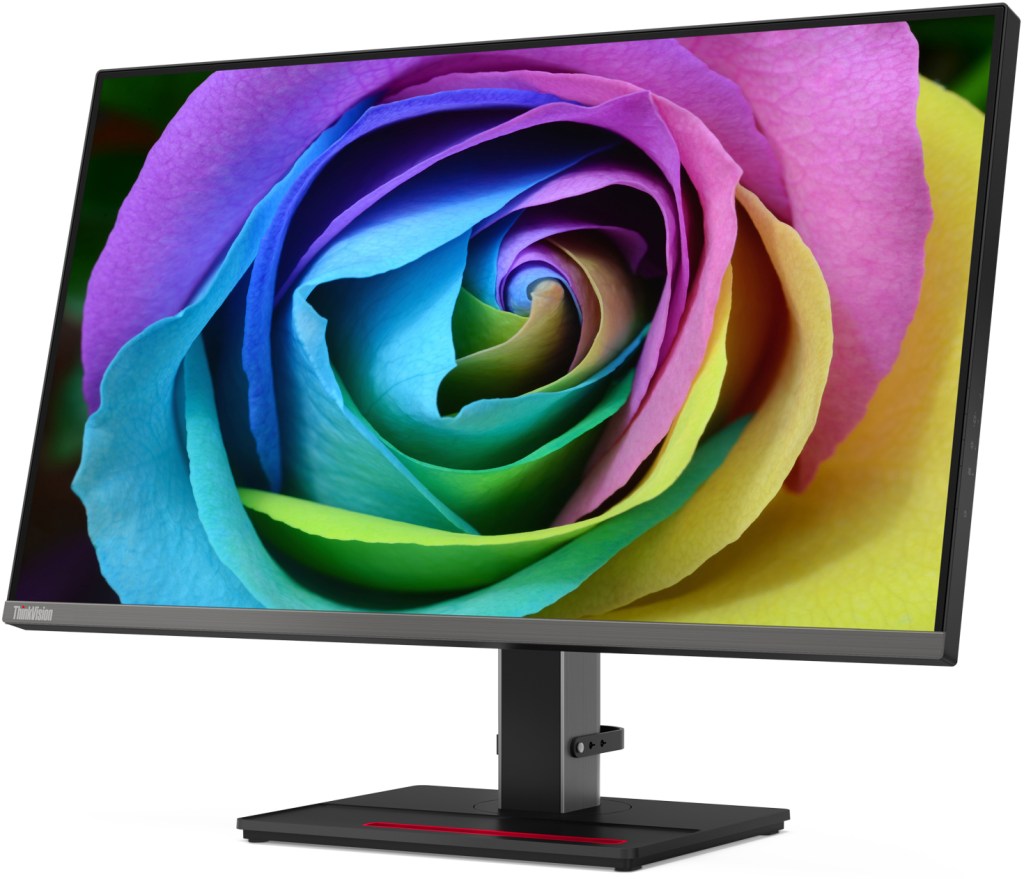 This past March, alleged leaks revealed that Samsung is planning on updating its top-shelf Odyssey G9 curved, ultrawide gaming monitor with mini-LED technology. It’s also suspected that the mini-LED monitor will have more than 2000 dimming zones, a 240 Hz refresh rate and a 5100×1440 resolution. We’ll be keeping an interested eye on this one, whenever it hits retailers.

The Best Desktop Computers You Can Buy in 2021