What’s better than getting an awesome new video game? Getting it for 20% off. ARMS for Nintendo Switch will drop on June 16, but you can pre-order it now with an Amazon Prime account and save $11. Get the details from Boy Genius Report.

From BGR:
Breath of the Wild was epic. Mario Kart 8 Deluxe is fantastic. Ultra Street Fighter II: The Final Challengers is so much fun to play. But all of those games are old news now. If you own a Nintendo Switch, there’s one big launch coming this summer that you can’t wait for. In fact, it’s now exactly two weeks away! That’s right, we’re talking about Nintendo’s hotly anticipated new title ARMS, which will be released on Friday, June 16th. 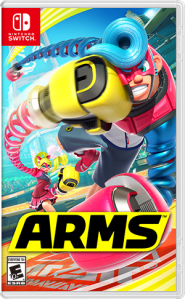 Want ARMS in your hands on launch day? Want to save 20%? If you said yes to both of those questions, you need to head over to Amazon right now and pre-order this hot new video game. Prime subscribers save 20%, dropping the price to just $47.99. That’s less than you’ll pay anywhere else.

Here are a key highlights from the product page:
– Fight via simple motion and button controls
– Select from a variety of fighters
– Fight in arenas with unique obstacles
– Choose your arms carefully
– Rated “E10+” w/ Cartoon Violence