As PC gaming has become more mainstream, and native 4K resolution is more accessible than ever, you’d think that OLED gaming monitors would be easy to find. However, there are just a handful of models on the market, and they are exceptionally expensive. Some OLED monitors are made specifically for gamers, while others are geared more towards creative professionals; though these models have enough features that overlap with what gamers need that they can easily fit into just about any gaming PC setup.

As you browse around for an OLED gaming monitor, you may have a few questions. And we’re here with answers to the two most frequently asked by customers.

An OLED panel uses individually lit LEDs as well as organic substrates ( the “O” in “OLED”) to create the image you see on the screen. This configuration allows for deeper blacks as pixels can be “shut off,” resulting in better contrast. The organic compounds also create richer colors for better color accuracy, giving you more true-to-life images.

Why are there so few OLED gaming monitors?

Long Answer: It’s more lucrative for companies to make OLED TVs because the cost of producing OLED panels for them is offset by demand. There are far more people willing to buy a new TV than a niche-market PC monitor. OLED panels are expensive to produce, and since OLED monitors would really only be suited for creative professionals and very high-end gaming setups, the demand is very low. This means that the cost of producing OLED monitors wouldn’t be justified, as sales would be very low. However, as technology advances, OLED panels will become more cost-effective for companies to produce, meaning that probably in the next few years, you’ll see more brands offering OLED monitors.

We’ve rounded up seven of the best OLED monitors and monitor alternatives you can buy from brands like Alienware, ASUS, and LG. We’ve broken down their features and price points to help you decide which best fits your needs and budget. Keep reading below to find the perfect OLED monitor for your gaming PC.

The 55-inch OLED monitor from Alienware is the best on the market. It has a 120Hz refresh rate for both PC and console gaming, support for both Nvidia G-Sync and AMD FreeSync VRR, a 0.5ms response time, and produces 98.5 percent sRGB color accuracy. You can connect your PC or console to the monitor via DisplayPort or HDMI inputs, and the included remote lets you change volume levels and navigate menus more easily.

The rear of the monitor features RGB lighting that you can customize to add ambiance to your gaming space without being distracting during high-stakes matches. The 55-inch screen features an anti-glare coating and can produce up to 400 nits of brightness, letting you enjoy your games in almost any lighting environment. 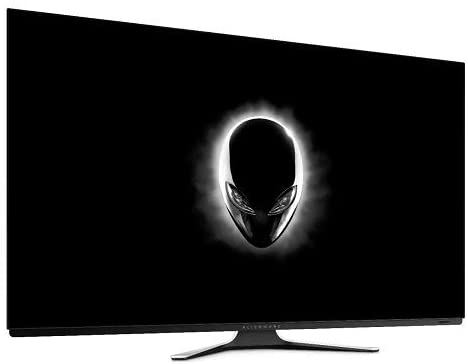 The AORUS 48-inch OLED monitor is a very close second for the top spot on our list. It has a native refresh rate of 120Hz but doesn’t appear to support either G-Sync or FreeSync. It makes up for this, though, by having five preset spatial audio settings to create virtual surround sound without any extra equipment.

It has a 1ms response time and produces 98 percent DCI-P3 and 130 percent sRGB color accuracy for more true-to-life images. It also has different control modules for aim assist and black equalizers for pixel-precise aiming in FPS games and enhanced contrast. 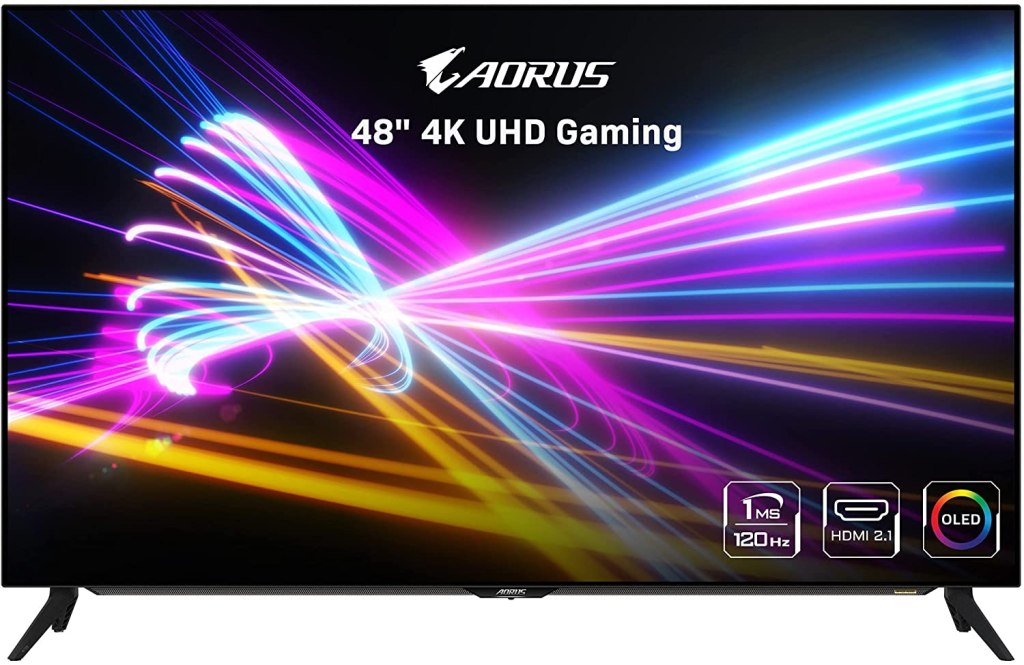 If you’re a Twitch streamer or create gameplay videos for YouTube, the LG UltraFine OLED Pro is the best monitor for you. Its 32-inch screen produces up to 99 percent DCI-P3 and Adobe RGB color accuracy for ultra-realistic images; which is perfect for editing thumbnails or highlight reels. It also has HDR400 and HDR10 support for enhanced contrast and detailing.

The 1ms response time gives you near-instant reactions to your inputs, and the 60Hz refresh rate gives you smoother action across multiple game genres. You can also choose between preset, professional color modes that allow you to get the most out of your content while editing images and videos. 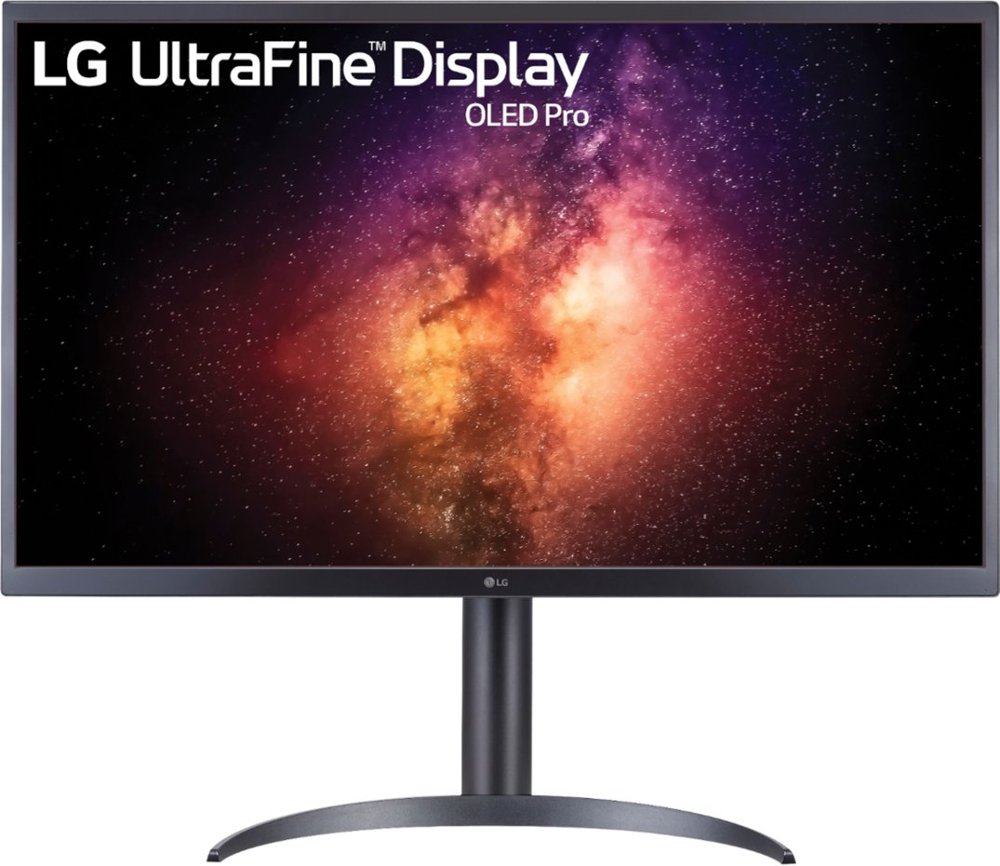 The ASUS ProArt portable OLED monitor is meant for gaming on the go, but it has plenty of features that will make you want to use it as your main display. The OLED panel produces up to 99.5 percent Adobe RGB, 99 percent DCI-P3, and 100 percent sRGB color accuracy and is factory calibrated for Delta E<2 color for incredibly true-to-life images.

It supports Dolby Vision, HDR10, and HLG for enhanced detailing, and the 1 million to 1 contrast ratio gives you ultra-deep blacks and brighter whites to make colors pop. The 0.1ms response time gives you near-instantaneous reactions to your inputs, and picture-in-picture or picture-by-picture modes let you run multiple programs at the same time, letting you record or stream while you play. 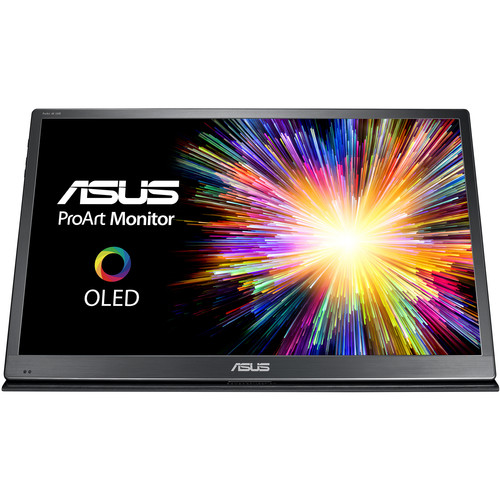 The Innocn portable OLED monitor is a more affordable option if you want high-quality gaming on the go. The 15.6-inch screen uses an OLED panel to produce 100 percent DCI-P3 color accuracy for better-looking games and deeper blacks for enhanced contrast.

The 1ms response time gives you incredibly fast reactions to your inputs, and the 60Hz refresh rate gives you a smoother experience during fast-paced action games. The integrated battery gives you up to 4 hours of play on a full charge and connects to your laptop via USB-C or micro HDMI. 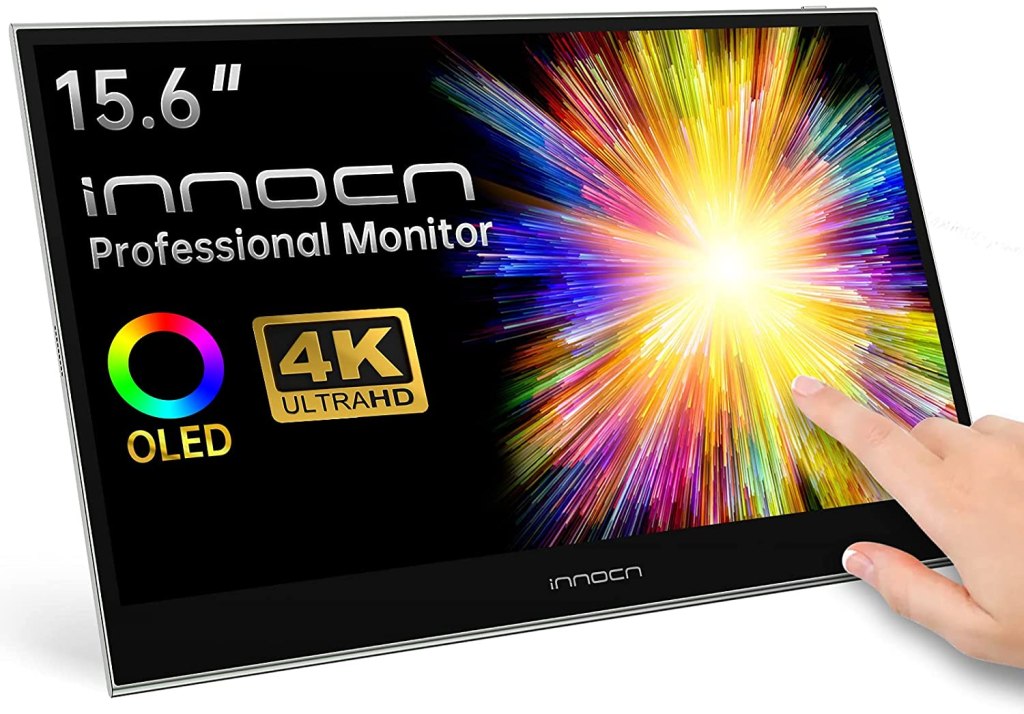 A TV might not be your first choice for a gaming monitor, but the 65-inch LG C1 is a great alternative if you want OLED technology in your gaming space. You’ll get a native refresh rate of 120Hz as well as support for G-Sync and FreeSync VRR for a smoother experience across PC and console gaming. It also supports Dolby Vision IQ, HDR10, and HLG for enhanced detailing, and with Dolby Atmos, you’ll get virtual surround sound without having to set up extra audio equipment.

The Game Optimizer feature lets you switch between VRR technologies and adjust black and white stabilizers for clearer images and enhanced contrast which will fix issues before they can ruin your game. This 65-inch TV also works with Alexa and Google Assistant, giving you hands-free voice controls over your connected consoles and PC. 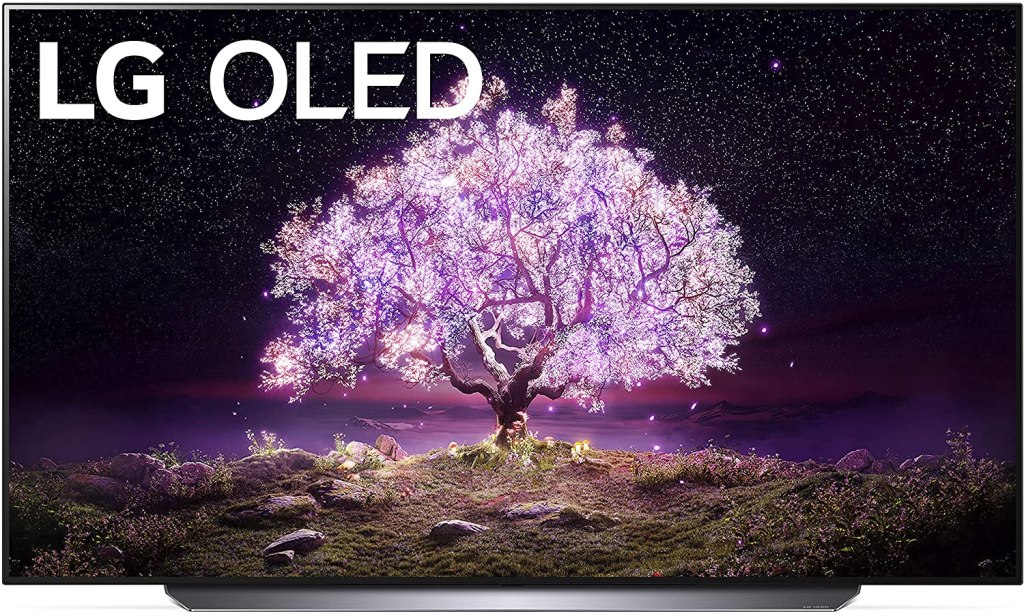 The Sony A90J is another great choice if you want to use an OLED TV as a gaming monitor. The 55-inch screen gives you plenty of real estate to see every incredible detail of your games, and the native refresh rate of 120Hz gives you super-smooth action. This TV is also optimized for gaming on the new PlayStation 5, syncing refresh rates, and lowering input lag for a better gaming experience.

If you use other consoles or your PC to game, Dolby Vision and IMAX Enhanced mode give you exceptional detailing and contrast. This TV also uses Sony’s Acoustic Surface Audio+ technology to turn the entire screen into a speaker for near-perfect audio and video syncing. You’ll also get Alexa and Google Assistant voice controls for hands-free commands to your consoles, TV, and PC. 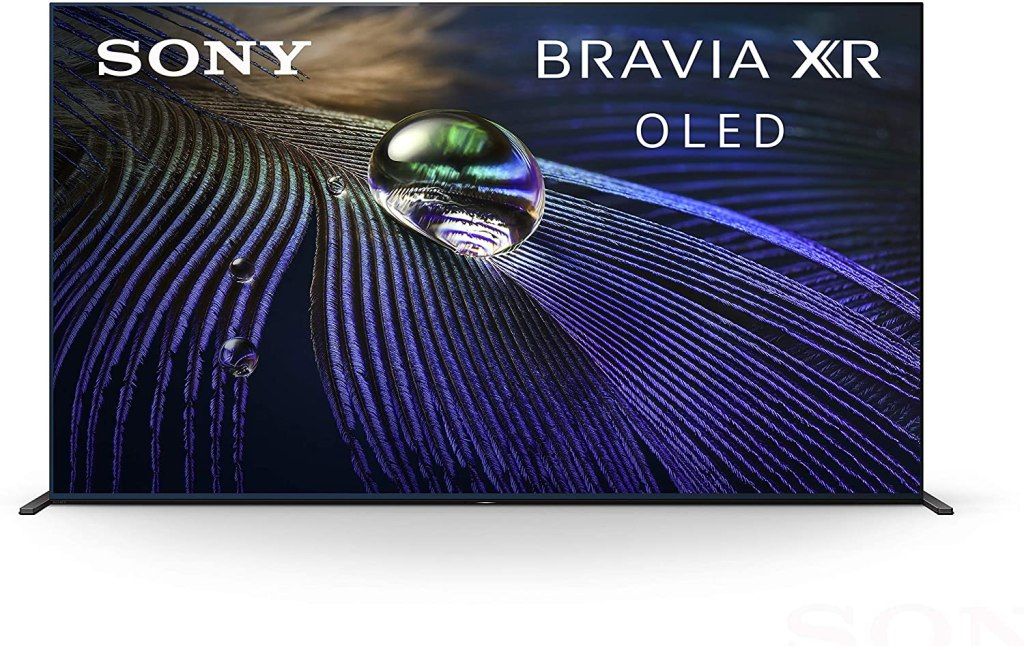 You hear the term "cutting-edge" thrown around a lot when it comes to new technology, but OLED actually earns it ... when it comes to movies, TV shows and console gaming. But when it comes to PC gaming, OLED gaming monitors don't make a whole lot of sense at the moment from a technical standpoint, which is why there are limited options for gamers.

If you're unfamiliar with what OLED is, here's a quick primer: OLED display technology uses organic compounds as the pixels to create the picture in your display. But what makes it special is that OLED panels don't need an additional backlight like an LCD or LED display would. When the display turns on, electricity activities those compounds inside the screen and they actively light up or turn off depending on what's been shown on screen, only lighting up the parts of the screen that are in use and delivering an infinite contrast ratio. In short: OLED displays provide the best possible picture you can get.

Why Are There So Few OLED Monitors for Sale in 2022?

While superior picture quality is definitely something you want in a gaming monitor, it's not the end-all, be-all for many gamers. Refresh rate is another big consideration for gamers because a high refresh rate ensures can support games with high frame rates. This, in turn, makes sure in-game visuals are smooth and free of blurriness, which has a tangible impact on gameplay.

OLED TVs work great as OLED Monitors for console gaming because those are only just starting to hit refresh rates of 120Hz, and the best OLED TVs can now support that. But for PC gamers who are into competitive multiplayer games (and this represents a large chunk of the PC gamer market), they're frequently running games at lower resolutions and but higher frame rates, such as 144 or 240 frames per second. The best OLED monitors that have been released up until now only run at a 60Hz refresh rate which is simply not good enough for a first-person shooter like Overwatch. And while a 144Hz OLED display is theoretically possible, the cost to make them is likely so high that it's not yet worth it. In fact, there are really only two true OLED monitors on the market right now, one from Alienware/Dell and one from Asus.

Other companies are racing to get their own OLED monitors on the market, but it's taking time to ensure this high fidelity experience can be made efficiently, effectively, and at a somewhat consumer-friendly price.

Another issue OLED displays must contend with is burn-in. Like Plasma TVs, OLEDs are much more susceptible to pixels permanently holding onto remnants of the image they form. And given that computers have many more static elements on-screen than TVs, this has been a big issue in the past. Given that we've started to see OLED displays pop up in some of the best small laptops and best gaming laptops, those issues may be a thing of the past, but only time will tell.

Are OLED Monitors Good for Gaming?

Given that OLED displays can be extremely fast and responsive with very low input lag, they have the potential to become great OLED gaming monitors. But since there is not a true 144Hz or 240Hz OLED gaming monitor, it's tough to say.

What we can say is that a 120Hz OLED TV makes for a great monitor if you are primarily a console gamer, or prefer games that don't absolutely need a frame rate above 120Hz. But that being the case, you'll still be paying a pretty penny for one of the best OLED TVs.