Don’t let the size of this speaker fool you. Yes, it’s small — barely 5.25” across and less than two inches thick — but what the B&O Beoplay A1 lacks in size, it more than makes up for in every other way. Which isn’t hard to believe when you realize the B and O in B&O stands for Bang & Olufsen — the Danish company that has been making sleek, high-end sound systems for almost a century.

They say good things come in small packages, but we’re certain they didn’t have the A1 in mind when that old saying was first coined. You just simply wouldn’t think that such a petite dome-like gadget could produce such high-quality audio. B&O’s “True360” sound enables the A1’s pair of 30W amps to power and yield a surprising amount of bass and clear mid-range vocals at high volumes. The domed design and built-in mic come in handy when you need to jump on a call hands-free, too. 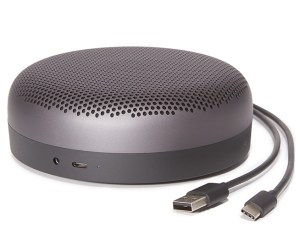 More importantly, though, is the A1’s battery life, which is rated at 24 hours of playback. An included leather carrying strap adds to the versatility of the Beoplay A1, so you could hang it from a door knob or branch or just lay it flat. It’s also quite durable thanks to a perforated aluminum speaker grill that elevates the overall aesthetic from just a speaker to something of a work of industrial art.

There are other speakers that can perform the same functions out there, but if you want a speaker that’s beautiful, then this is it. Smart design is what’s always been attractive about Bang & Olufsen and this is why the A1 is the best of the bunch.