As far as hobbies go, record collecting is the kind that has something of a steep barrier of entry. There are the economic considerations, of course, but there’s also the matter of know-how. Whether you’re trying to figure out what the heck a pre-amp is, deciding between belt-drive and direct drive, or struggling to understand the difference between passive and active speakers, you might start to wonder if you’ll ever get to actually play that copy of Fleetwood Mac’s Rumours you found at the Goodwill.

Getting into vinyl doesn’t have to be that difficult or expensive; it just depends on what kind of experience you’re looking for. The first and most obvious thing to start with is the turntable. The one you choose will affect both the sound quality and the amount of other stuff you’ll have to buy. Some turntables are all-in-one; they have everything you need to plug in and play, but the sound won’t be as good. On the other hand, there are record players with very few built-in features — those are designed for people who take audio quality seriously and want to be able to control every facet of their audio experience. Of course, that involves spending a lot more time and money.

The sweet spot for most beginners is somewhere in the middle; good starter record players have features like built-in preamps, automatic arms, and even USB outputs, but they’ll leave things like speakers to you. If you’re still not sure what a pre-amp is or does, the basic gist is that a turntable with a built-in preamplifier can be plugged directly into active speakers. That way, you can save money and space by having a sleek setup that just consists of two speakers and a turntable. Turntables without built-in preamps need to be plugged into stereo systems that have a phono preamp or into a separate stand-alone pre-amp. We’ve included options with built-in preamps that can be switched on and off (that way you can choose between active speakers or buying your own preamp), as well as one retro, all-in-one pick.

Audio-Technica makes sound equipment that an audiophile won’t turn their nose up at, but aslo won’t send you into a sticker-shock induced cardiac arrest. This turntable lets you convert your LPS to digital through its USB drive, and it has precise controls like variable pitch control and an adjustable tonearm.

Pros: USB feature lets you convert LPs to digital. The turntable has a removable dust cover and a guide light for use in the dark.

Cons: Tonearm is not automatic; user has to get up and put the arm back. 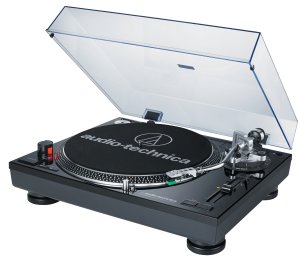 The iconic Victrola brand got revived by Innovative Technology, and it now produces the kinds of record players you might have seen in the ’20s when they were still called phonographs. Except, of course, these models are outfitted with slightly more modern tech like CD drives and USB ports. It’s an all-in-one option, and reviewers were pleased with the sound quality of the built-in speakers.

Pros: Bluetooth, CD, USB, Tape, AUX drives. Includes a remote, and even has an AM/FM radio.

Cons: Needle is not the highest quality. 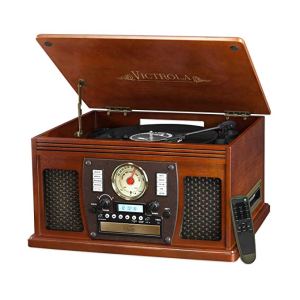 This Audio Technica turntable is fully automatic, meaning you can press start after setting the record on the platter and the arm will move into place on its own. While this option offers less precision than the other Audio Technica option, it’s considerably more affordable while still offering Audio Technica quality. There is a newer model of this turntable, but it doesn’t offer that many new features for the 30 dollar price difference.

Pros: Has an automatic arm and Bluetooth functionality, as well as traditional stereo output for purists. The pre-amplifier can be switched on and off for those who prefer the pre-amps in their stereo system.

Cons: No USB, unlike the other options. 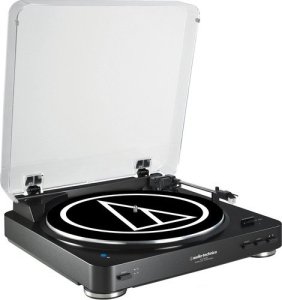