The Ricoh Theta series made a big impression when it was first introduced, for its amazing 360-degree “spherical” photo capability. But while the technology was always impressive, it’s with the new third-generation Ricoh Theta S that a few key improvements make the spherical camera an all-around more usable device and vastly boost its practical value.

With a new 1/2.3 inch image sensor capturing approximately 14 megapixel still images and 1080p full HD video, the quality of the Theta S is definitely on a par with high-end digital point and shoot cameras. Its ISO range now goes from 100 to 1600 and the built-in lens has a bright f/2.0 maximum aperture. Plus, the Theta S is now capable of spherical video recording. A revamped user interface and new WiFi connectivity that’s twice as fast, round out the upgrades. 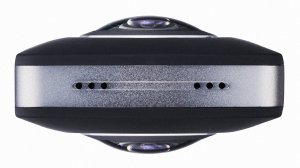 In the last few years, Ricoh has been rapidly innovating and has produced some of the most daring and futuristic cameras on the consumer market. So much so, in fact, that the company’s press refers to the Theta S as an “image input device” more so than a “camera.”

Thanks to powerful processing capabilities and a dedicated app for iOS and Android, the Ricoh Theta S is expanding and redefining what a camera can do. More than just a novelty or gimmick, the Theta S has become a wonderful tool for creative imaging. Its two lenses on opposite sides of its “head” work with a pair of sensors to create 360-degree pictures that are the visual equivalent of surround sound. It moves the idea of the photograph for the first time completely off the page. In order to view the image from the Theta S, you need an animated screen which allows you to rotate through the picture, or a print that can wrap completely around you. Always innovative, the Ricoh Theta S “image input device” now adds excellent handling and connectivity to its resume.