Recorded while the Rolling Stones were on a self-imposed “tax exile” in the South of France, Exile on Main St. has long been recognized as their greatest album. Now, you can own a piece of music history, with this autographed vinyl record from Stones guitarist, Keith Richards.

Exile on Main St. was released on May 12, skyrocketing to Number 1 around the globe, just before the band launched its 1972 American Tour. With over 8 million copies sold worldwide, it is the Stones’ fourth best-selling album, behind Some Girls, Sticky Fingers and Tattoo You.

You haven’t experienced hits like Tumbling Dice, Sweet Virginia, Happy and Shine a Light until you’ve heard them on vinyl. Not only does does this record deliver authentic vintage sound, but it does so with the autograph of Richards on the cover sleeve. 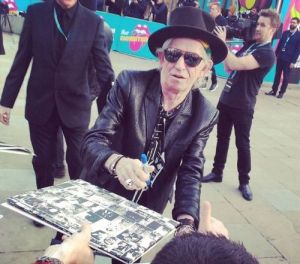 Keith Richards signed it in 2016. It has been certified by the PSA/DNA, which is the preferred third-party verifier for collectors, dealers and auction houses. It comes with a numbered sticker and Letter of Authenticity, but if you’d like to check for yourself, look up certificate number AB01329 in the database.