The TV remote, it’s been a staple resident of the living room courtesy of our televisions. Still, a spotlight is being pointed on this mystical accessory that has kept us on couches. Even though Samsung is notable for many things, like its high-end smartphones and gorgeous, smart TVs, there was something else from the company that caught our attention during CES 2022 — a new remote that draws power through Wi-Fi radio waves.

Yes, you read that correctly! The announcement of Samsung’s new Eco Remote will probably be one of the most surprising announcements during tech’s biggest show with CES 2022. Just like its predecessor, this new version of the Samsung Eco Remote has a solar panel to allow it to charge indoors or outdoors when there’s enough ambient light around. However, it’s differentiated by its ability to preserve its charge by procuring bits of energy from radio waves from nearby Wi-Fi routers. 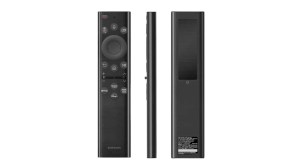 This isn’t the first time Wi-Fi has been leveraged to do something else besides being the conduit for data connectivity between devices. Remember the Hex Home Wireless security system introduced last year at CES 2021? It was a DIY home security solution that measured Wi-Fi wave disruptions in your home to detect movement in specific rooms.

Samsung’s manipulation of Wi-Fi radio waves is different since it’s being harvested to preserve the remote’s power — which means less waste in the form of batteries being ditched and ending up in the trash. There’s also the option of charging it via USB-C if you require it to charge faster. It’s an innovation that’s honestly under-appreciated amid all the other big tech announcements during CES 2022. Samsung plans to include this new remote in its new lineup of 2022 TVs.

Shop the Best Amazon Deals
Love what you’re seeing? Follow us on Twitter, Instagram and Facebook and be the first to hear about new product launches, the latest trends and can’t miss deals you won’t find anywhere else.