Flatscreen TVs are getting bigger, thinner, smarter and more advanced, but if you have a blank 12-foot wall in your home, you may have the urge to fill it — completely fill it — with a sharp, high-definition image for live TV, streaming, or gaming. That requires a great projector, and that market has exploded lately.

The advent of short-throw projectors means that a high-quality wall-filling image no longer requires drilling holes in your wall or ceiling for a projector mount. These units sit nicely on a credenza or shelf or even on the floor and project their image onto the wall or screen from within several inches, often with a high-end speaker on the back of the unit taking care of the cinema sound.

Among the short-throw room-dominating projectors, the Samsung The Premiere 4K Smart Laser Projector is said by many to be the king. As the world’s first “ultra-short-throw projector,” it’s really in a class of its own. When Samsung released the world’s first 4K smart triple-laser projector in late 2020, their intent was clear: Set the market. Does The Premiere LSP9T live up to the world-domination goal? Samsung sent SPY its projector for review, and after getting our hands on this much-hyped home theater marvel, we can officially declare it the holy grail of home projectors.

I can tell you that the teen gamers in my household are teary-eyed at the thought of sending this projector back to its makers. Keep reading for our full review of the Samsung The Premiere 4K Smart Laser Projector. As we recently noted, this projector is on sale as part of Samsung’s Black Friday in July sale, so if you’ve been lusting after this projector, you can save $500 on the retail price for a little while longer. 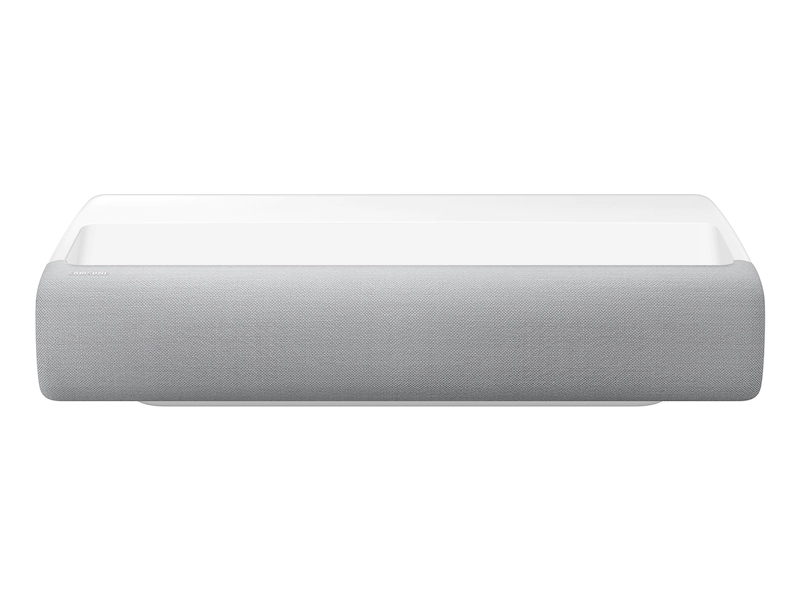 A great deal is made about the fact that The Premiere LSP9T is the world’s first triple-laser projector, and the first HDR10+ certified one as well. That’s a lot of impressive-sounding techie lingo, but what does it mean?

HDR stands for High-Dynamic Range, which in the TV and projector world refers to a mode that shows video and still images with vastly increase brightness, color accuracy and contrast. The first HDR10 TVs were introduced in 2014. HDR10+ was unveiled by Samsung and Amazon Video in 2017, and it quadruples the brightness of HDR10 and also adjusts the image on a frame-by-frame basis to reduce oversaturation.

The triple-laser part simply means the unit uses three lasers as a light source, which is why The Premiere LSP9T creates images at a brilliant 2,800 ANSI lumens. That means you can enjoy the projector even in rooms with significant light interference.

Setting Up The Premiere LSP9T

In our weeks of testing various large and small projectors, we’ve encountered units that took multiple tries to set up and others that were up and running within minutes of unboxing. The Premiere LSP9T was most definitely the latter: One main unit, power cord and simple and ergonomically pleasing remote control were all we needed, along with the rudimentary setup one-sheet. A more robust manual is built into the home screen of the unit if needed, and can also be easily downloaded from Samsung’s website. Setup time, including signing up for a Samsung account and downloading the Smart TV Things iOS app as a second remote, was just around 5 minutes. 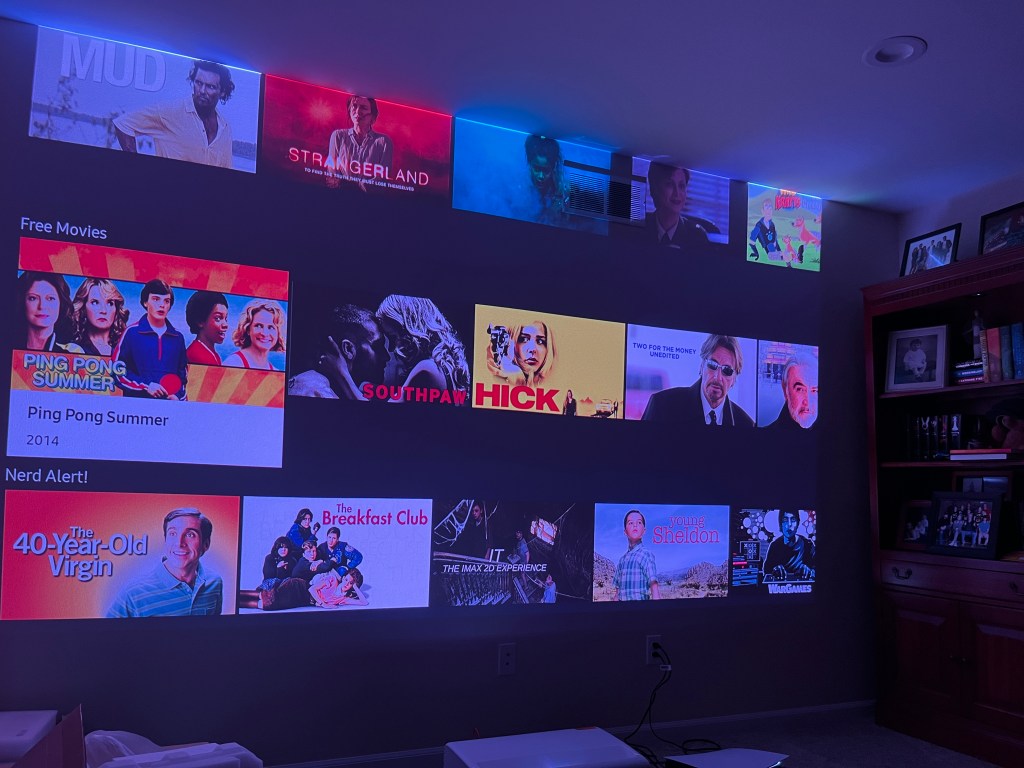 Mere minutes after unboxing, we have liftoff. Mike Fazioli | Spy

Placing the unit on the floor at the ideal range (in our case, 10 inches) and creating a viewing area of roughly 11 feet by 6.5 feet was simple. There were some obvious bulges and ripples in the image, but that was due to our wall rather than the unit. It was easy to find where to adjust the screen area by quickly scrolling through the settings menu. We were extremely impressed with the adjustment options. The basic option offers a grid with four points where the image can be adjusted up/down or left/right. The advanced version (a simple click away) gave us a 15-point adjustable grid as shown in the picture below. Bright neon laser borders made the adjustments easy to see and execute. It took only a few clicks here and a few there to create a perfectly proportioned image.

The 4.2 channel audio system provided more than enough aural oomph, and the sound was clear and crisp. This also may have to do with the fact that The Premiere’s cooling fan, which has a significant job to do with a powerful unit that creates a good deal of heat, runs very quietly in the background and does not interfere with the sound. 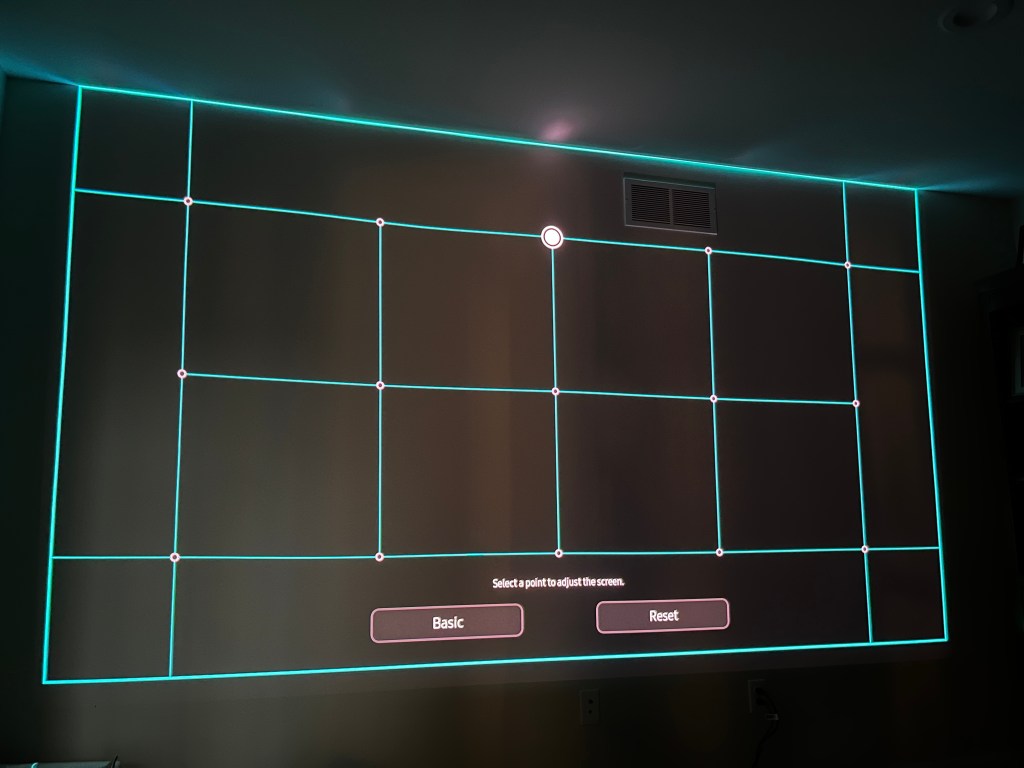 The Premiere LSP9T In Action

Our first test run took place in daylight hours, with the window blinds drawn but our glass door was unobstructed letting light in. As soon as the projector turned on, we knew we had a winner, because even with heavy light pollution the massive image was clear and crisp. We tried live TV first via the included Samsung TV Plus app and the picture and the sound were outstanding. 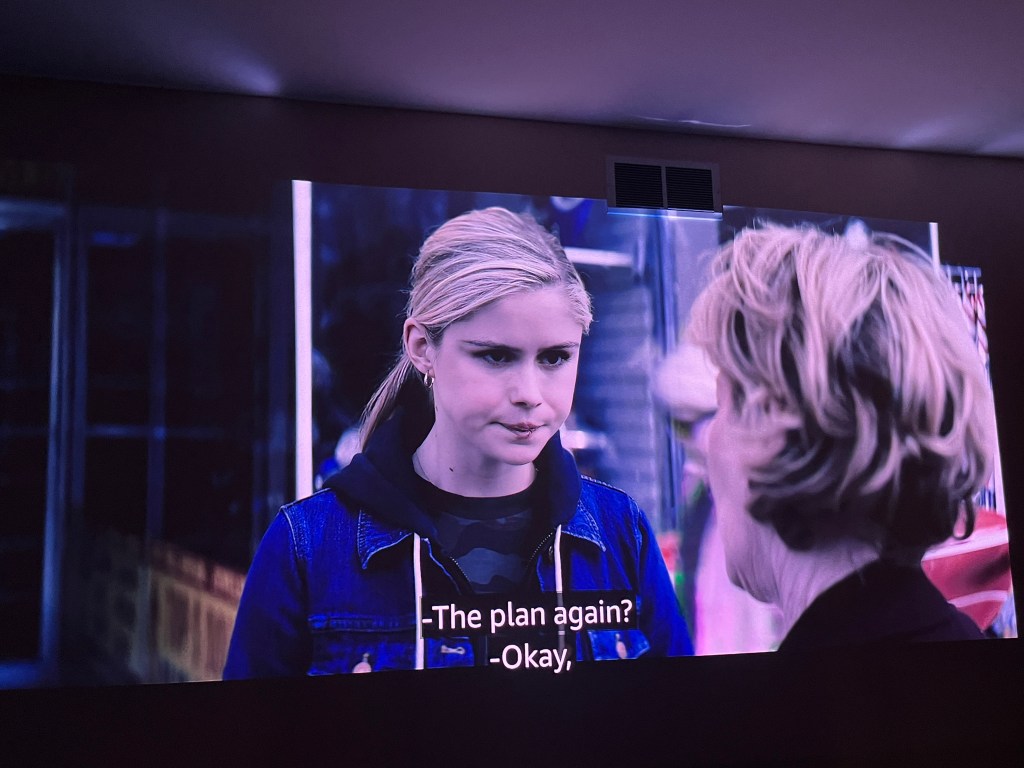 For fans of “The Boys” on Prime Video, we can tell you that Starlight holds up far better as an 11-foot HDR10+ image than Butcher. Mike Fazioli | Spy

When we switched inputs to the Roku Streaming Stick 4K to finish off the latest season of The Boys, the image really upped its game. Even at 11 feet across and, in a semi-lit room, the image was nothing short of fantastic, and the sound filled the room admirably. We switched over to the built-in Roku app on The Premiere and logged in to see if there was a difference, and there was none. Our cable service (Spectrum) is also viewed through the Roku, and again the picture and sound across all channels were terrific, without any lag while channel surfing or switching inputs. (This is, however, where a true universal remote would come in handy — more on that later.) 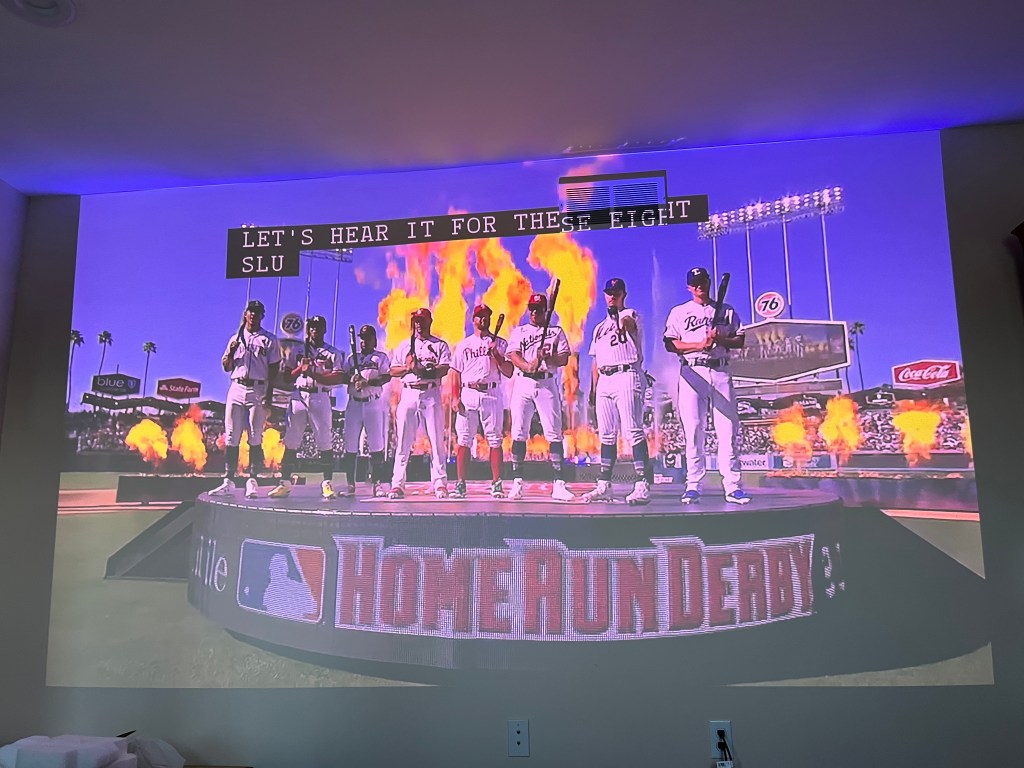 Sports viewing and giant screens really need to go hand in hand, and The Premiere did not disappoint here in the slightest. We watched the MLB Home Run Derby on ESPN via the Spectrum app on the Roku (both built-in app and streaming stick), and the performance remained consistently great. (Please note the pixelated “Home Run Derby” logo in the photo was a result of the lo-res stage screen the players are standing on.) There was no lag in the action, the ball was easy to follow, and the sound was superb. Also note the image above was from 8 PM with the windows in the room now open, with sunset still a full 90 minutes away. 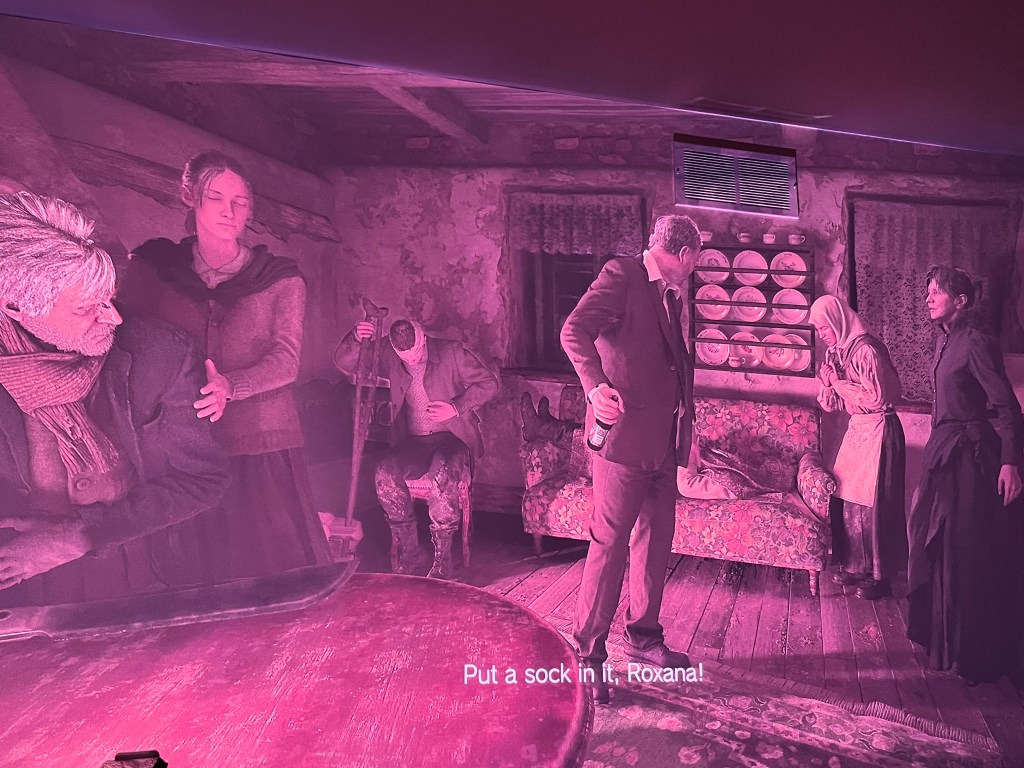 The gaming experience, amped up by Samsung’s Game Enhancer mode which makes the picture more vivid, was outstanding. Zero lag, super-low latency, seamless connectivity between the PS5 and The Premiere, amazing clarity and intense sound were all present. To be honest, gaming on a screen of such immense proportions verges on sensory overload. At least for me — our teen gaming assistants were not put off by it in the slightest, and are already mourning the day The Premiere heads back to Samsung.

Phone play with The Premiere was more of a mixed bag in a house full of iPhones. While AirPlay connected instantaneously and required a passcode only for the first usage, many of the phone-friendly features of The Premiere are clearly intended for Samsung Galaxy phones. It makes sense for them to keep the perks in the family, but a more iOS-friendly interface would be a welcome future upgrade.

It’s probably best to call out the shortcomings of The Premiere LSP9T first, because there are not that many. The remote, while sleek and intuitive, is not a true “universal” remote despite commands and setup instructions to the contrary. It was unable to control the Roku Streaming Stick 4K, as a true universal remote would. Also, the features allow you to mirror your phone on the giant screen with a mere tap of the phone on the device, and also the MultiView which allows you to split the screen between your mirrored phone and whatever you’re watching, are not iOS-friendly.

The price, of course, is another rub. This is a very expensive unit. For the premiere version of The Preimere, the 130-inch version we tested, you’ll have to contend with a $6,000 retail price. But, as Ferris Bueller said about Cameron’s dad’s Ferrari 250 GT California Spyder, “it is so choice. If you have the means, I highly suggest picking one up.” In addition, the 120-inch version of this projector is much more affordable, and also worth considering.

Do we recommend the Samsung The Premiere LSP9T 4K Smart Triple Laser Projector? Absolutely. This is an amazing big-screen experience, and the fact that it is an ultra short throw projector and does not require a mount or any contractor-grade work on your room adds to the appeal. It’s 5 x 21.7 x 14.4 inches so it’s not overwhelming in size, and its design is aesthetically pleasing, blends with any decor and can easily be set on a floor-based credenza or table.

Did Samsung set the projector market with The Premiere LSP9T? We say it has. 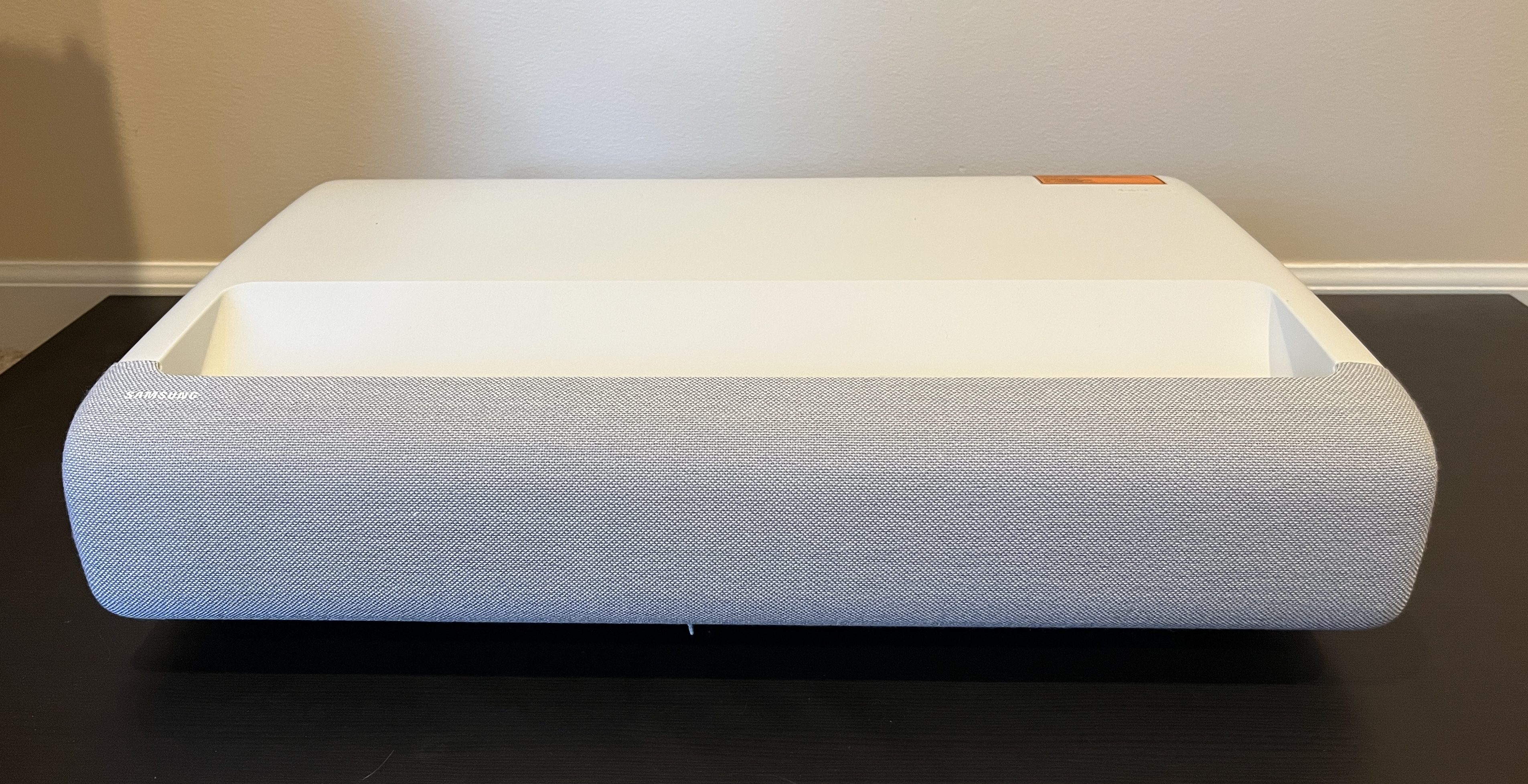 How We Test Projectors

This summer, SPY has been hard at work testing the world’s best projectors, and we’ve used different criteria based on the category: short throw projectors, portable projectors, and iPhone projectors. For The Premiere, we were looking specifically at factors such as brightness, smart features and connectivity, color clarity and overall picture quality. In addition, we made sure to test it with a variety of media types.

The room we tested The Premiere LSP9T in has two east-facing windows and a wide glass doorway. When testing iPhone projectors, the brightest of which threw 1000 lumens, we covered the glass doorway with a blanket to block out the light.

Our target wall is 12 feet wide by 8 feet tall, perfect for projector tests. The unit was tested using Live TV via the included Samsung TV Plus app, streaming via a Roku Streaming Stick 4K, and gaming via a PlayStation 5 in both local and online gaming modes. We tested it during daylight (blanket removed) and nighttime hours. As with all of the projectors we’ve tested, we assigned The Premiere a number rating for each specific category. You’ll have to stay tuned for the official SPY guide to the Best Projectors of 2022 to see how The Premiere compares to other projectors we’ve tested. Spoiler alert: this is the holy grail of projectors, and there’s really nothing else like it. 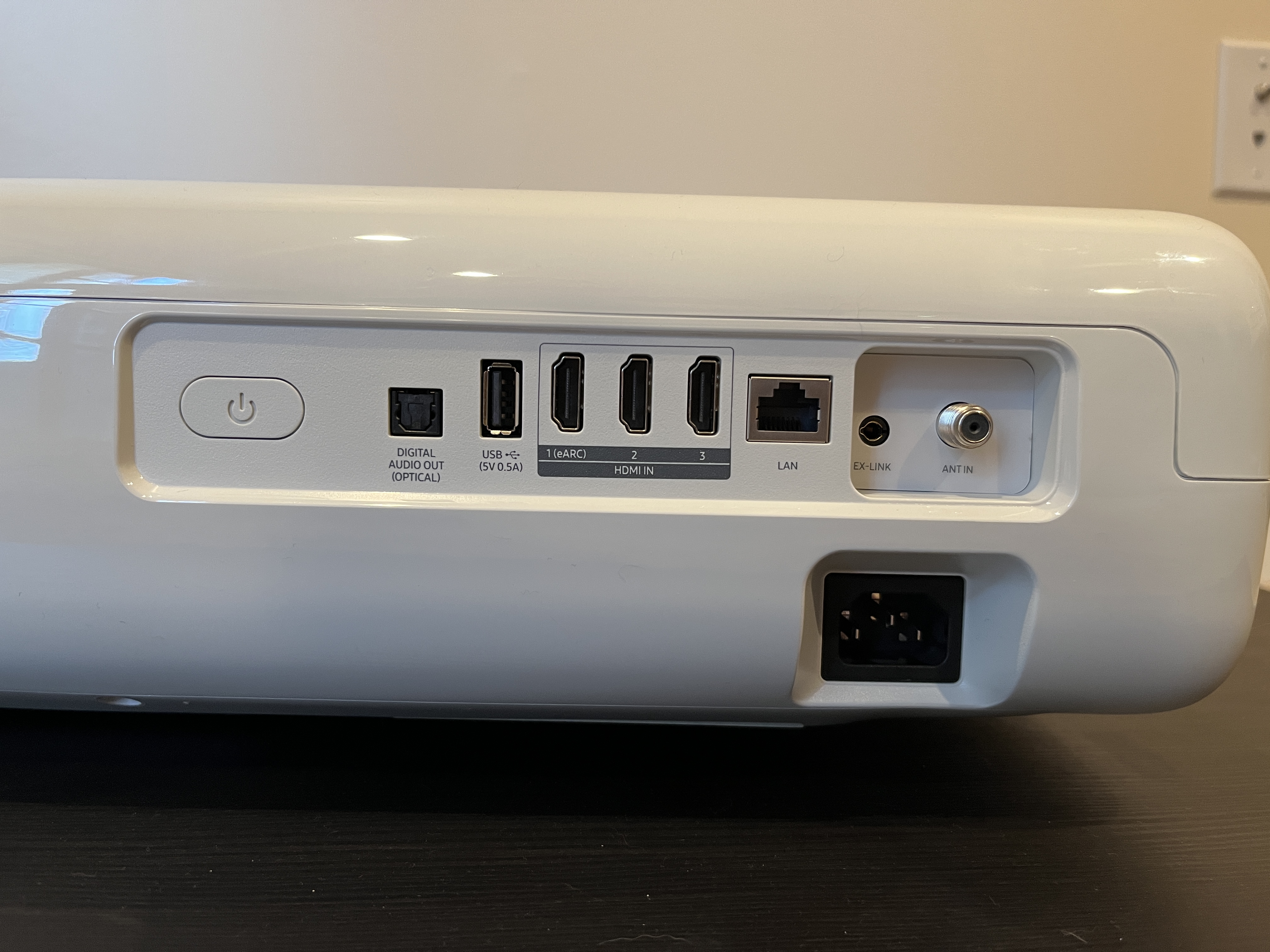 The ports on the back of The Preimere. Mike Fazioli | Spy