* Sister Act is celebrating its 25th Anniversary
* The movie was so popular, a sequel and Broadway musical adaptation was created
* This is a feel good, musical comedy smash

Sister Act has just celebrated its 25th anniversary and there’s no better time to revisit the musical comedy, which has become a cult favorite for all ages.

Released in 1992, the film starred Whoopi Goldberg as a Reno lounge singer who has been put in protective custody in a San Francisco convent and has to pretend to be a nun when a mob boss puts her on his hit list. She soon forms a bond with the nuns through music and their choir goes on to perform for the pope.

While the film received a lukewarm reception from critics at the time (about a 73% on Rotten Tomatoes), the film was a success with audiences and went on to become a box office smash, grossing over $200 million worldwide. It was so well received in fact that it would become the eighth-highest grossing film worldwide in 1992, launched a sequel , a world-touring Broadway musical and garnering two Golden Globe nominations.

Amazon has Sister Act and Sister Act 2 available for streaming right now for just four bucks. You have 30 days to start watching the movie, and three days to finish it once you hit “play.” You can also watch both movies for free with this 7-day free trial to Amazon and HBO.

In honor of its 25th anniversary, a few of the movie’s main cast members got together and reunited on The View earlier this month to discuss their favorite memories of the film and perform a special medley of the film’s famous songs.

The sequel, Sister Act 2: Back in the Habit, was released just one year after the success of the first movie, where Whoopi Goldberg reprises her role as Vegas lounge singer Deloris VanCartier. Deloris is persuaded to return to the convent as her help is needed teaching their choral students at the high school, which is in a crisis since the administrator running the school is threatening to shut the place down. Look out for a young Lauryn Hill, as well as Whoopi’s then-teenage daughter, who both appear in the film.

Want to grab both films on DVD? Amazon’s got a great double feature deal right now, with both movies on DVD for just $4.99. 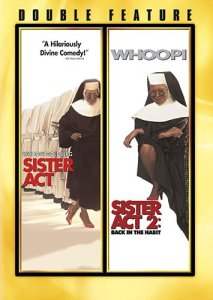 Sister Act/Sister Act 2: Back in the Habit Double Feature DVD