Despite the fact that Sonos have spent the last 20 years innovating when it comes to wireless audio, its new Sonos Roam speaker is a first for the company in many ways.

Typically focusing on the high-end market, Sonos speakers tend to offer excellent audio quality and an unrivaled multiroom wireless audio experience that is built on Sonos’ custom technology. For the most part, Sonos products come at a premium price. But Sonos set out to change all that with the $169 Roam, a truly portable speaker that can connect to WiFi or Bluetooth, making it equally well suited for use around the house or at the park. And maybe, more importantly, this is a speaker that is competitively priced without sacrificing the quality Sonos is known for.

In short, the Roam wants to be a unicorn speaker that suits every need of any listener.

Note: We originally published this review on 4/25, however after extended use, we’ve updated the review with our 60-day impressions, which you can find further on down in this piece. 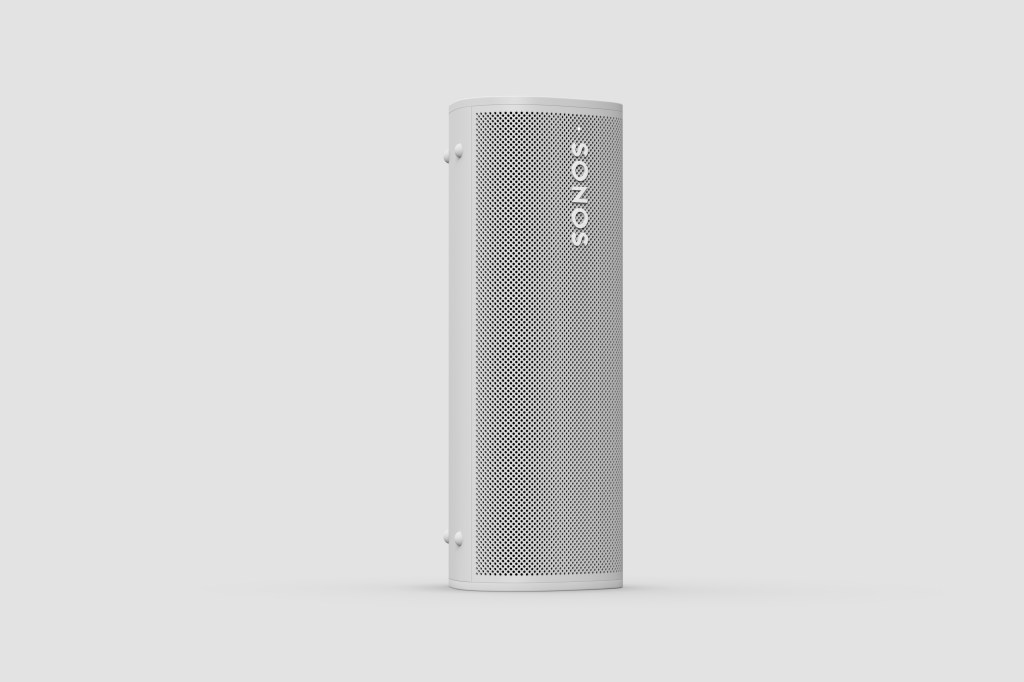 It’s not only rare to see speakers that can stream via WiFi and Bluetooth, but there aren’t any that are truly portable and cost less than $200 while still sounding great.

If you’re wondering why a speaker would have WiFi and Bluetooth, the answer mainly comes down to convenience and audio quality. There are benefits to streaming audio via WiFi, and one of those is audio quality.

Audio streamed via WiFi not only sounds better because it’s subject to less compression, but your phone isn’t mandatory because the Roam connects directly to whatever music service you’re using.

Being connected to WiFi also makes it easier to link speakers together across a network, or use a smart home voice assistant to get the weather or turn on the lights with your voice.

Achieving all of these things is no easy feat, which is what makes the Roam so intriguing, and why I was excited to put it to the test.

But does the Roam hit all of its marks? Keep reading to find out.

Simply put, I haven’t heard a speaker this small that sounds as good as the Sonos Roam when it is streaming over WiFi. The audio is clear, detailed and nuanced. In other words, it’s clean.

Compared to a Bluetooth speaker, there’s more warmth and depth to the audio, which is especially noticeable with things like background vocals and instruments.

And compared to a small WiFi speaker like the Nest Mini, it’s no contest. Granted, the Nest Mini was never designed to be a serious music listening speaker, but it’s not bad sounding. And the fact that it immediately sounds inferior to the Sonos Roam is a testament to how good the sound of the Roam is.

Unless the track itself was improperly mastered or low quality, music on the Roam never sounded distorted, muddy or thin. Predictably, the audio didn’t sound as good when streaming via Bluetooth, but it also didn’t sound bad. In fact, it still sounded better than any Bluetooth speaker that’s comparable in size.

And while there were some inherent limitations due to the size of the speaker (more on this later), what Sonos has done with the Roam can only be considered a success.

A big reason for this is that the Sonos Roam uses its built-in microphone and AI-powered algorithm to analyze the acoustics of any room it’s in and make the necessary adjustments for optimal sound. 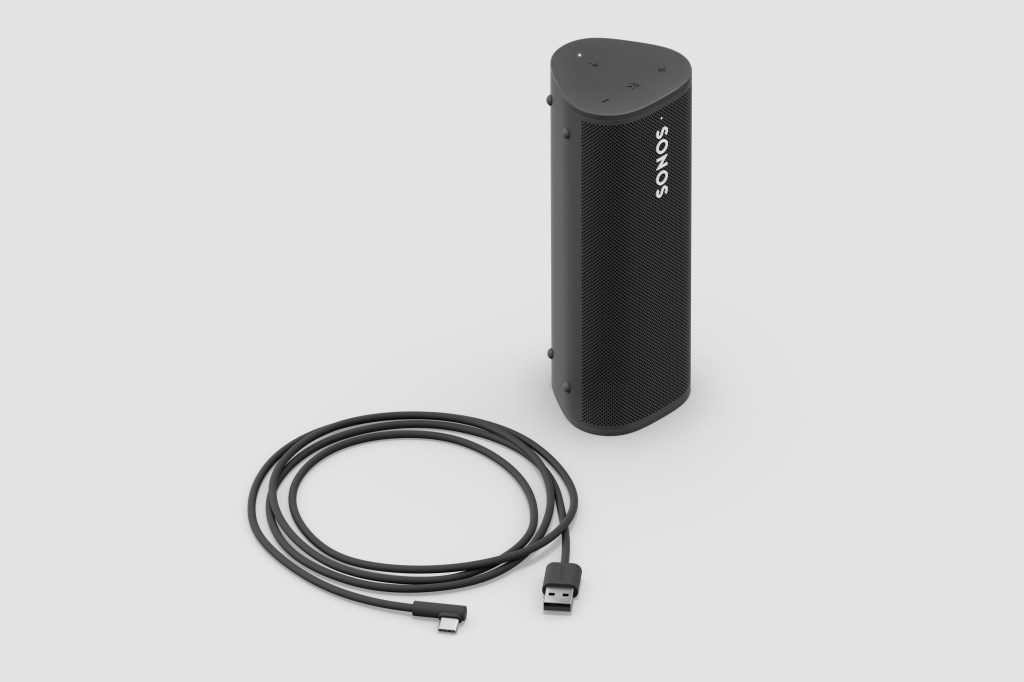 The other great thing about this speaker is convenience. When functioning as a WiFi speaker, the Roam is always on and ready to connect at a moment’s notice. You never have to go through the minorly annoying routine of turning the speaker on and getting it to pair with whatever device you’re using like you would some Bluetooth speakers. This also means that it’s ready to carry out any Google Assistant or Alexa voice command you shout at it.

But this means the speaker always needs to be charged, and to make sure it’s as easy as possible to keep this speaker powered up, the Sonos Roam also supports Qi wireless charging. This means you can stick it on virtually any wireless charging pad and it will refill its battery. While it doesn’t seem like a huge hassle to plug a cord into a speaker, there are far too many of us in the world with Bluetooth speakers that are never charged. But because the Roam is as simple as setting it down on a pad, I found that I never let it die like my other Bluetooth speakers.

When you’re away from home, you can also rest assured that this speaker will also last you 10 hours over Bluetooth. We even got it to last that long over WiFi, which is a much more power-hungry way to stream. 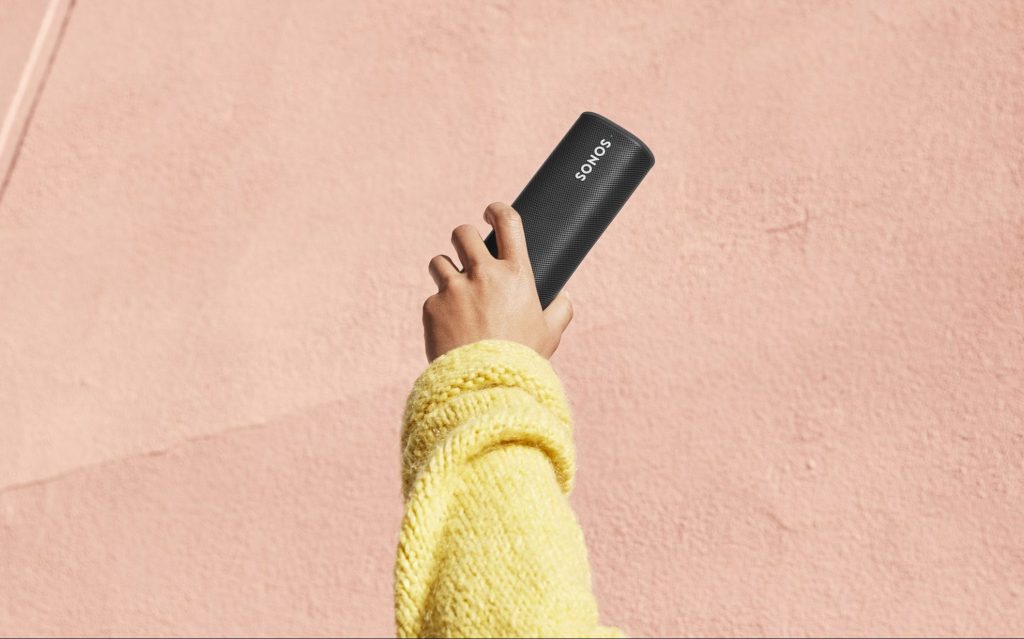 And if you’re wondering how its claims of waterproofing hold up, it can absolutely function as your shower speaker and survive. While we wouldn’t necessarily have it sitting under running water for audio quality purposes, you don’t have to worry about this thing going kaput on you if you leave it out in the rain or drop it in the pool.

As I mentioned, there are some inherent limitations with the Sonos Roam. While it stands out in many facets, bass and low-end audio is not one of them. While audio is never thin, you also won’t get that noticeable thump that you’d hear in a larger speaker. And it’s almost unfair to knock the Roam for this when it comes to a speaker this size, packing this much tech, and that’s completely weatherproof. Big low-end is an unreasonable expectation.

But I only point this out to mention that while the Roam is a great speaker for occasional listening in a small room like a bedroom or bathroom, or to take on the go, it’s probably not going to replace someone’s main speaker setup if they’re a serious music listener. 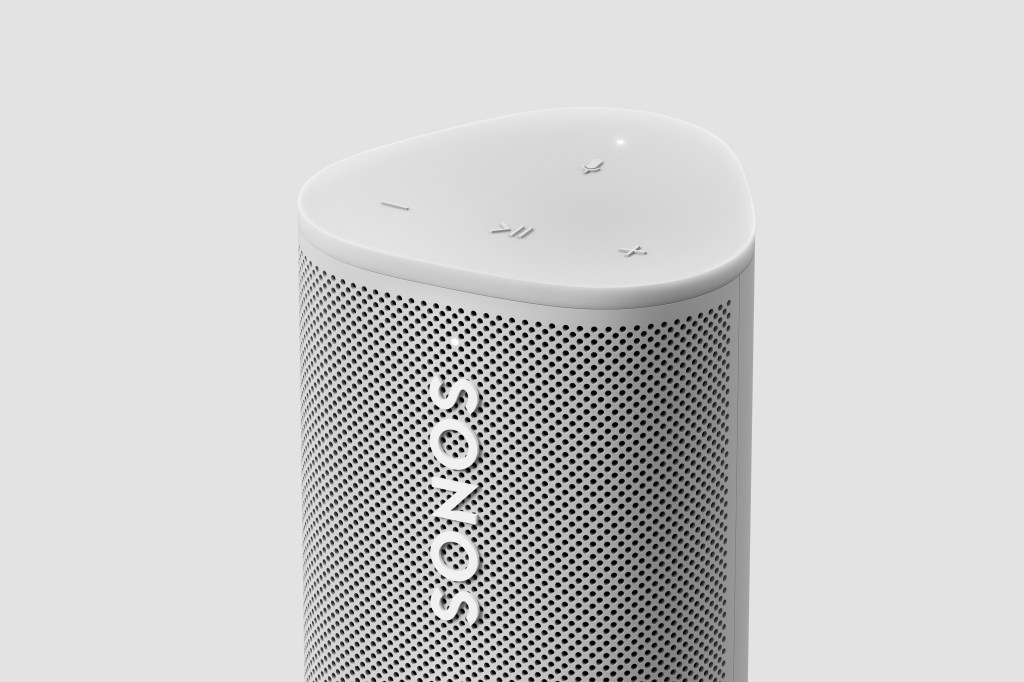 Aside from that, the only other faults with the Sonos Roam are relative nitpicks. A 3.5mm audio input would have been nice for connecting sources that aren’t wireless. And using Google Assistant on the Roam was slower and clunkier than with a Nest Mini. But on the whole, these were not major issues that should detract you from considering the Roam.

Despite all the cool things the Sonos Roam can do, its most unique feature is still the oldest feature that Sonos is known for: its custom platform for wirelessly streaming audio. While the Sonos S2 platform runs on top of WiFi, Sonos has its own bag of tricks to ensure that its speakers have a consistent connection through the house with optimal audio quality. But I also love that its companion smartphone app functions as a mother brain.

It collects all your favorite music services under a single roof so that you can control which speakers are playing what audio without having to switch between five different apps. But even if you’re not trying to control five speakers at once, it’s nice to be able to place tracks from Spotify, Mixcloud and Soundcloud into a single queue.

It’s also worth noting that the Roam has a feature called Handoff that lets you transfer whatever stream is playing on your roam to the nearest Sonos speaker with the push of a button. While I wasn’t able to test it out, it definitely seems intriguing for those of you who use the multiroom features and are looking to expand your network of Sonos speakers.

My time with the Sonos Roam didn’t end with the initial review. In fact, I’ve been using it regularly since then, both on its own, and in concert with the Sonos One smart speaker to see how well it integrates into an existing network of Sonos speakers.

Perhaps unsurprisingly, I still love this speaker just as much now, as I do then. 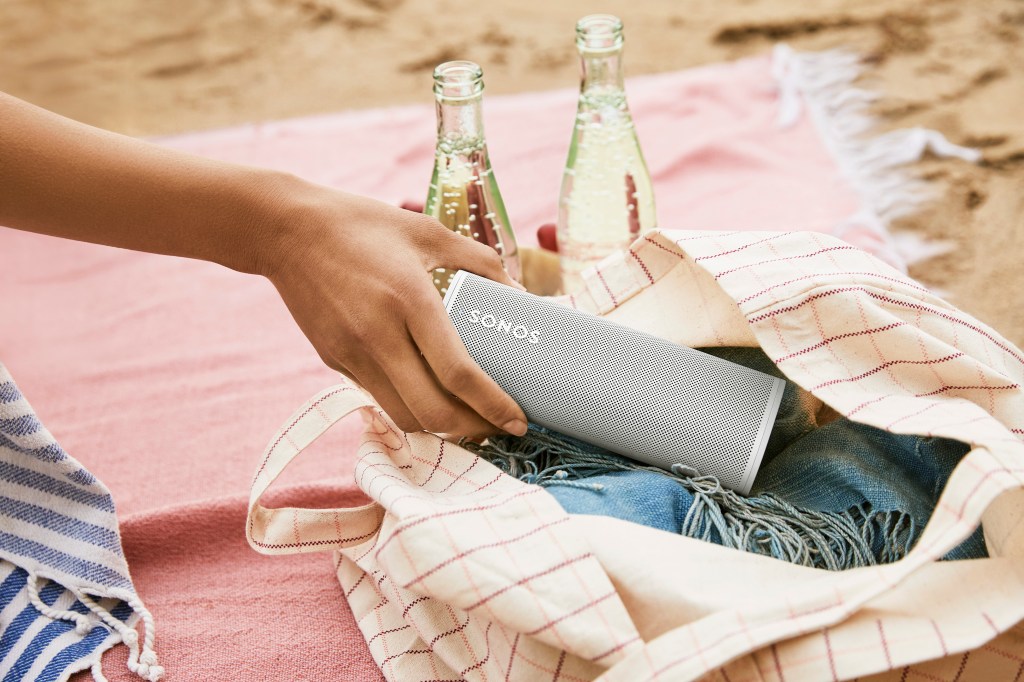 That said, it’s not all perfect. There are some gripes to be had with the Roam (albeit minor ones). 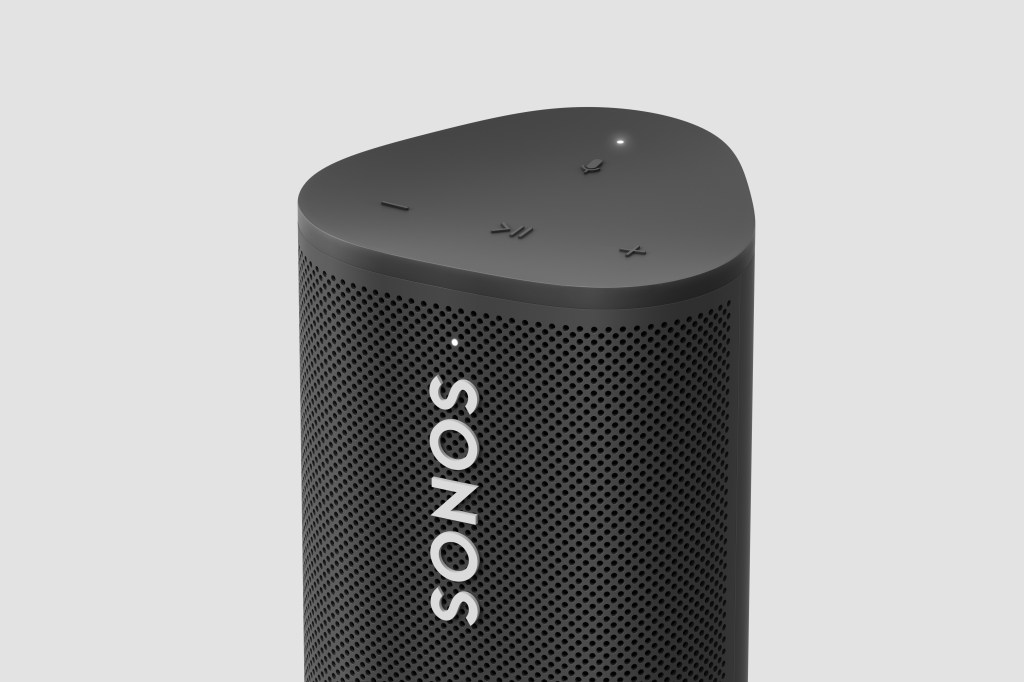 But in general, these sins do not affect the core experience of the Sonos Roam. They largely pop up in fringe scenarios, and given the many, many other virtues this speaker possesses, they can easily be forgiven. And ultimately, I still believe that the Roam’s ability to function independently of a smartphone, and not have to be constantly powered on and/or paired has made me more likely to use it around the house more than a typical Bluetooth speaker.

The Verdict: This Is the Best Portable Speaker You Can Buy

While the Sonos Roam may not be the cheapest portable speaker around, the added functionality and audio quality that you get from it makes it easy to recommend if you were planning to spend more than $100 anyways. 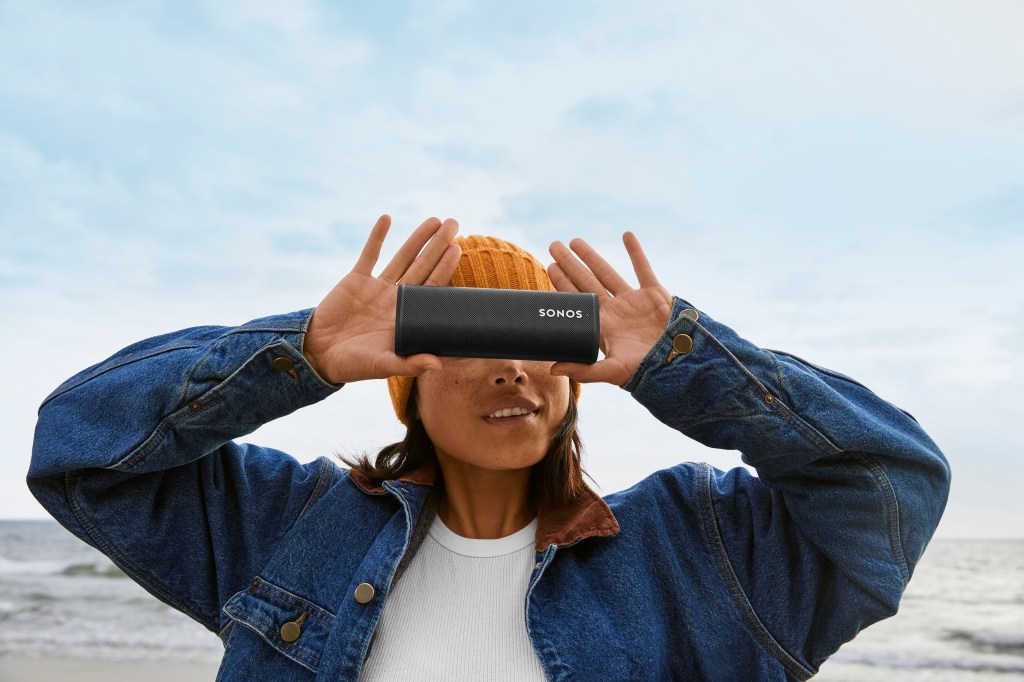 While we still like speakers such as the UE Wonderboom due to their form factor and price, we think the Sonos Roam is the better overall buy. And because of how easy it is to use when it’s connected to your WiFi at home, we suspect you might use this around the house more than you would a Bluetooth speaker.

Your TV Speakers Aren’t Doing Your Favorite Movies Justice. Check Out These Great Budget Soundbars Instead