* Ever wanted to join forces with Spider-Man?
* Best Buy’s new Sphero lets you team up with Spider-Man anytime you want
* The toy comes with LCD eyes and speech recognition features for enhanced gaming

Spider-Man: Homecoming made a heroic box office debut, but now that you’ve seen the movie in theaters, don’t you want to enjoy the experience at home before the movie comes out on Blu-Ray?

Now, thanks to Spider-Man by Sphero, you can tag along with Spider-Man on his adventures whenever you feel like teaming up against Doc Ock or the Vulture.

The Sphero Spider-Man comes in the traditional red, blue and black colors of Peter Parker’s Spidey suit, and is fully animated to keep you entertained for hours as you battle villains together–in story mode, of course. 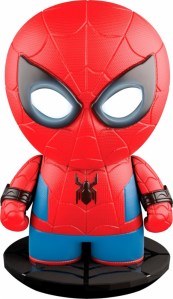 The Spider-Man by Sphero comes with built-in speech recognition so you can joke around with the web-slinger, as he asks you questions to “get to know you” and tells jokes. The toy has expressive LCD eyes, too, so you can tell whether or not your Sphero Spidey is feeling blue or is amped up for action. His eyes also light up when he senses motion, so he’ll know when it’s time to keep enemies trying to enter your room at bay.

By hooking your Spider-Man up to the Internet via WiFi, you can write your own Spider-Man story and create new missions with every decision you make, calling for a different experience each time. Your web connection also grants you access to content updates for stories and the toy’s free interactive app via iTunes or the Google Play Store.

Your Sphero Spider-Man provides over two hours of gaming when it’s fully charged, but after connecting it to your complimentary charging base, he’ll be back up and running in no time.

Based in Boulder, CO, Sphero fuses physical robotic toys, digital apps and entertainment experiences to unlock a new world of play. Think of this interactive Sphero Spider-Man as your old-school superhero action figure, re-invented as a tech-savvy toy.