* Bluetooth wireless speaker shaped like an Imperial Starfighter
* Will play more than just the classic TIE Fighter sound
* Works with an AUX cable, too

This cool Bluetooth speaker is shaped like the iconic TIE Fighters from Star Wars. But don’t let the classic, twin-engined, late Imperial design fool you: it doesn’t just play that signature high and hollow-sounding woosh of the on-screen spaceships. It’ll also play the cantina song, or the sound from that YouTube video of goats bleating out the Star Wars theme, if you want.

It’ll play anything your Bluetooth or 3.5-mm audio cable sends it. With a wireless range of about 30 feet, it not only plays music wirelessly, but you can “tie” these speakers to your phone and tell people you’ll take the call on your TIE fighter. We’re not saying you should say that, only that you can. 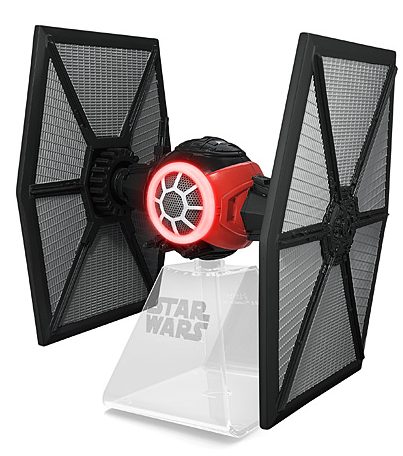 Charging is via a standard micro USB cable, and the speaker has a red light-up ring around the “cockpit” when it’s on. A funny thing about the TIE Fighter specifically: it happens to be designed as a shape that’s functional for a speaker as well.

There may be no better vehicle in the galaxy than this TIE Fighter speaker set for contemplating the interesting genre convention of sound in outer space movies. Space, with some exceptions, is basically silent. So what are we listening to? A bit of trivia: in the case of the TIE Fighter specifically, the sound effect consists of sampled noise from trucks with all-terrain tires passing on a highway.