Are you ready for it? The Taylor Swift comeback officially begins today, with the long-awaited release of her new album, “Reputation.”

Granted, while “the old Taylor is dead,” it’s not like the pop superstar has gone anywhere over the past few years (She released her last album, 1989, in 2014). Swift has stayed in the headlines, thanks to her attention-grabbing “feud” with Kanye West and Kim Kardashian, and a much-publicized sexual assault trial, where she accused a radio DJ of groping her.

Now, with the release of “Reputation,” the multi-platinum singer is hoping to take control of her own narrative, with songs like, “Call It What You Want” and “Don’t Blame Me” showing off a feistier side to her, that is willing to take the hits — and then punch right back. The lyrics are matched by less poppy tracks, in favor of EDM-tinged tunes, sharper beats and even some attempts at rapping. 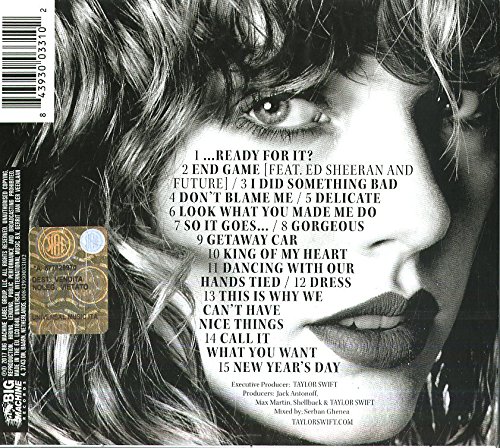 While fans are still divided over the new Taylor — with some Amazon reviewers saying the album isn’t up to par with her old stuff, while others are more vocal, calling the songs “forgettable and flat” — critics seem to love it. “Reputation” currently holds a 79-rating on Metacritic, which indicates “generally favorable reviews.” Here are some highlights:

Variety: “For the first time in her six studio albums, Swift has made a record that sounds all of a piece — and it’s a piece that may break the camel’s back for some old fans, but for the ones who love the most up-to-the-second pop music in 2017, it’ll feel like a necessary, and completely charming, cohesion.”

Rolling Stone: “‘Reputation’ is her most intimate album – a song cycle about how it feels when you stop chasing romance and start letting your life happen. As one of the all-time great pop masterminds, she’s trying something new, as she always does. But because she’s Taylor Swift, she can’t stop being her own turbulent, excessive, exhausting and gloriously extra self.”

The New York Times: “The bombastic, unexpected, sneakily potent “Reputation” is many things: It’s the first album on which Ms. Swift has cursed (“damn” doesn’t count); it’s the first time she has sung about consuming alcohol (and repeatedly at that); and it’s the vehicle for her most overt songs about sexual agency. Ms. Swift is 27 now, and the things she used to deny herself — in song, at least — are no more.”

Entertainment Weekly: “It’s not just that she wears badness uncomfortably, like leather pants tried on in the wrong size; for all their borrowed swagger, the songs, with their vague allusions to dive bars and lipstick marks, lack the sharp specificity of her best work. “

Two special-edition Target releases (available below) come with limited-edition magazines, which contain more than 50 personal photos, a foldout poster and the physical CD. Grab your copies soon though — as with most Taylor Swift limited releases, this version is expected to sell out.

We Ranked All of Taylor Swift's Albums