I believe the famous saying goes: “If a tree falls down in the middle of the forest and no one is around to hear it, does it make a sound?” I believe the answer is yes, but you should be around to see it and hear it, if you want to be, even if you can’t physically be there. Thankfully, they make cameras designed for use in the natural world that can help with that.

There’s plenty of gear out there for helping you traverse rough and rugged parts of our animal kingdom from hiking boots to magnetic compasses, binoculars and trekking poles. As humans with advanced technology and centuries of experience contending with the natural world, there are few places we can’t physically get to on this planet. However, you can’t be every place at once, and you certainly can’t capture every incredible moment in nature at the same time. That’s why they invented trail cameras.

Being in nature all day everyday is exhausting, potentially dull and potentially life-threatening. Sure, we all love up-close-and-personal footage with nature’s most intimidating beasts, but that doesn’t mean it’s worth potentially sacrificing someone’s life for that shot. That’s why trail cameras are the next best thing. They’re built tough and rugged, and can easily record moments big and small in the natural world you’ll want preserved — from a bird nesting to a jaguar sourcing its next meal.

Whether you’re a wildlife researcher in need of dependable equipment or an environmental enthusiast looking to take your hobby to the next level, these are the best trail cameras for capturing everything in 2021.

How Do Trail Cameras Work?

Trail cameras, at their inception, were designed for the longest battery life possible which oftentimes meant a sacrifice in video quality. Thankfully, as technology has improved, cameras have struck a balance between footage quality and battery life found a happy medium. Most of them work off of motion or sound sensors, and turn on only when an animal is closeby so you don’t get a lot of dead footage of foliage. They range in quality, price and available functionality, so we’ve provided a variety below so you can decide the one that works best with your needs and budget.

This trail camera from Vikeri is designed to capture 1520P HD images with vibrant 20MP resolution and clear audio even during the dark of night. It has a built-in 2.4″ LCD color screen for viewing playback in the moment and is IP66 waterproof with a heavy-duty case over it for protection. The probe lens has a seal around it that’s rain-proof, drop-proof, dust-proof and made to work just as effectively in the rainforest, desert and forest. The trigger speed is 0.2 seconds and distance is within 25 meters, or about 80 feet. The angle lens is 120° wide so you get a broad view of the animal and its surroundings, and it’s super easy to install. 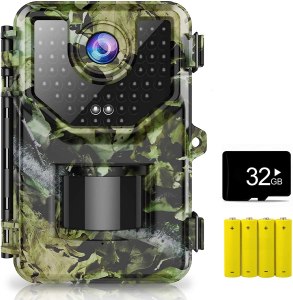 This is another super high-quality trail camera available at a decent price that comes with a large, premium-aperture lens that’s got super high sensitivity to movement even in low light. The camera has a blur reduction algorithm so colors and shapes come through even clearer in darkness, and the video recordings come in 1080p with 30 frames per second. The videos are converted to small file sizes that use up to 80% less storage than other cameras so you can capture more on each memory card, and the motion detection has a speed of 0.1 seconds. It’s very easy to operate and accepts up to a 128GB SD card. It also comes with a bunch of great features like time lapse, loop recording, standby time up to 8 months and a fully waterproof case. 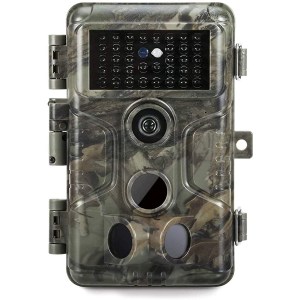 This mini trail camera is perfect for capturing smaller wildlife and staying even more hidden amongst the ecosystems its observing. It’s got a built-in, automatic full IR filter that can capture 12 MP images and full HD 1080P video during the day and night. It just needs four batteries to run, unlike the 8-12 bigger cameras need, and is designed for low power consumption and extending battery life as long as possible in standby mode. It comes set with default settings that are ideal for most wildlife scenarios and is very easy to mount and install. 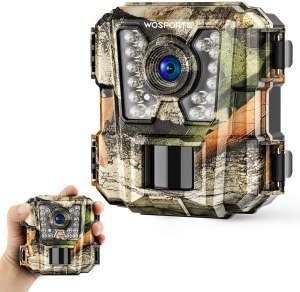 They’ve packed a ton of functionality into this small, affordable trail camera from Wildgame Innovations. It’s 14 megapixel and comes with a built-in IR flash range and detection range of 65 feet. It comes with 21 high-intensity infrared LEDs for capturing video and images without spooking animals, and has an energy-efficient design. It comes with bungee cords for attaching it to a tree or post and has enough capacity for a 32GB SD card, not as much memory as other cameras but enough for the average user. 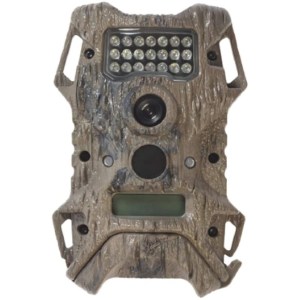 This trail camera doesn’t mess around. It’s got a reflex trigger time of 0.5 seconds and 42 “BLACK” IR emitters with a 100 foot sensory range. It has a burst mode that takes 1-9 images with each trigger and has low-light retina sensitivity so animals wandering the night will still be captured. It’s built with an extended nighttime range for high-quality video after dark. It’s also made with Secure Lock password protection and is built for SD cards up to 32 GB. 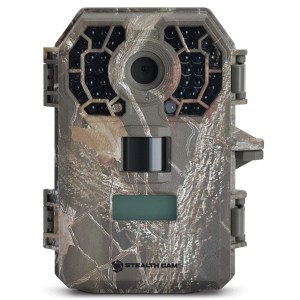 This wildlife trail camera comes with a higher price tag and some more advanced features that could be worth your while if you can afford it. It accepts up to a 32GB memory card and has a 0.3 second trigger speed with 16MP image resolution. It’s got a 100-foot detection and illumination range, as well as a low-glow LED night vision flash for capturing images and video at night. It’s built with fast image recovery so the camera can capture more pictures in a shorter amount of time, and it’s got dynamic video capabilities. It can record 720p video for up to 30 seconds and has a 1-year battery life while taking 35 nighttime and 35 daytime images per 24-hour period. Each image also captures the moon phase, date, time, temperature and other key metrics for biological research. 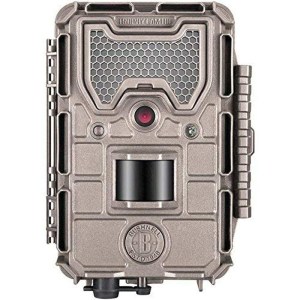 This trail camera has all the bells and whistles, including two different sensors, one for capturing high-resolution daytime images and another for prime illumination capturing after-dark activity. It has 42 no-glow LEDs that illuminate the images at night without spooking wildlife. It’s also made with Range Control that adjusts the trail cameras for distance depending on if your subject is close up or far away. The most important differentiating factor, though, is this camera’s 4K video capabilities and 32MP image capture. It’s also got a tactical design built for durability in the face of even the harshest of elements. 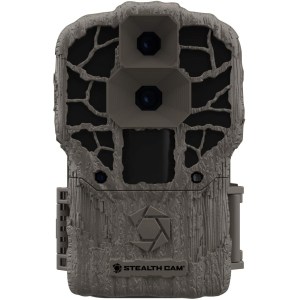 A solar-powered trail camera makes so much sense, and nearly eliminates the concern over losing power at those critical encounter moments you want to capture. This one comes with a 2500mAh solar pack that’ll keep the camera running day and night. The camera captures 16MP images and HD video, with clear sound quality as well. It’s got a 2.4″ LCD screen in the back equipped with 262K color for a vibrant display, and it’s got a 0.5s trigger time so you won’t miss a beat. The PIR sensing angle is 90 degrees so you get a wide shot and it’s got a burst mode for capturing 3 subsequent photos at once. It’s built to withstand extreme weather conditions and is IP66 waterproof, dustproof and shockproof as well. It also comes with a mounting bracket so installing it right where you want it is easy. 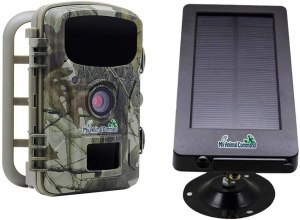 This isn’t your regular trail camera, it comes with a bunch of features including an A.I solution that analyzes your trail photos by the species and gender of the animal. It’s made to maximize the efficiency of your footage and the technology itself. It also comes with 20MP picture quality, 48 power LEDs, an 80′ flash and 70′ detection range as well. It’s got a 0.7s trigger speed, notably slower than other cameras, but can take color photos and comes with multi-shot and time-lapse modes as well. It comes with its own 16GB SD card and has an ultra-compact design for blending in with the surroundings. 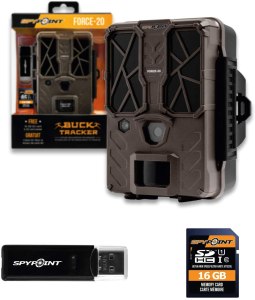 This trail camera from Bushnell has a battery life of a whole year and has a 0.2s trigger speed, 0.6s recovery rate and an 80′ No-Glow infrared night range. It takes 30MP images so your animal kingdom footage will be as clear as possible and 1080p 60fps video as well. It comes in a durable, rugged casing made to withstand the elements and accepts up to a 32GB SD Card so you’ll have plenty of memory to work with. 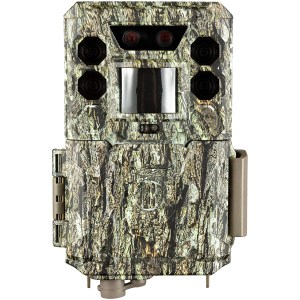