Technically, the word “virtual” means “close to reality,” but it’s kind of hard to pretend you’re actually slaying demons and dragons when you’re getting tangled up in those hopelessly messy wires attached to your VR goggles. That’s where Damson Audio’s AuraVisor VR Headset flies to the rescue.

Equipped with a 32 gigabyte hard drive and pre-loaded with the Google Play Store and the Nibiru Android OS interface, the AuraVisor VR Headset offers a cutting-edge gaming experience with no strings attached. 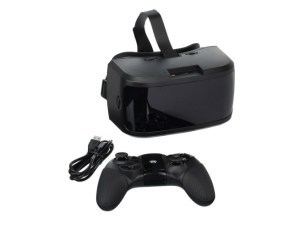 Turn your living room into a virtual arcade as you roam the vast lands of Google Play’s expansive catalog of video games. Transform your bedroom into a Mobile IMAX theater when you watch Captain America: Civil War in 2-D or 3-D on the AuraVisor VR Headset’s mesmerizing QuadHD display.

The AuraVisor VR Headset may be wireless, but an HDMI port makes viewing content from your PS4 or Xbox One almost as easy as watching a movie stored on your AuraVisor. Almost.