Do you really, really like Batman? Can you afford to drop $500,000 on a one-of-a-kind, jewel-encrusted Audemars Piguet automaton watch?

Then please head to 1st Dibs, our favorite site for time-wasting and drooling over gorgeous antiques, and make an offer on this mysterious pop-culture artifact.

We have so many questions about this timepiece. Can you really signal Batman with this jewel-encrusted pocket watch? Where did it come from, and what unbelievably wealthy nerd commissioned it in the first place? What is it with Batman fans and ridiculously priced clocks? 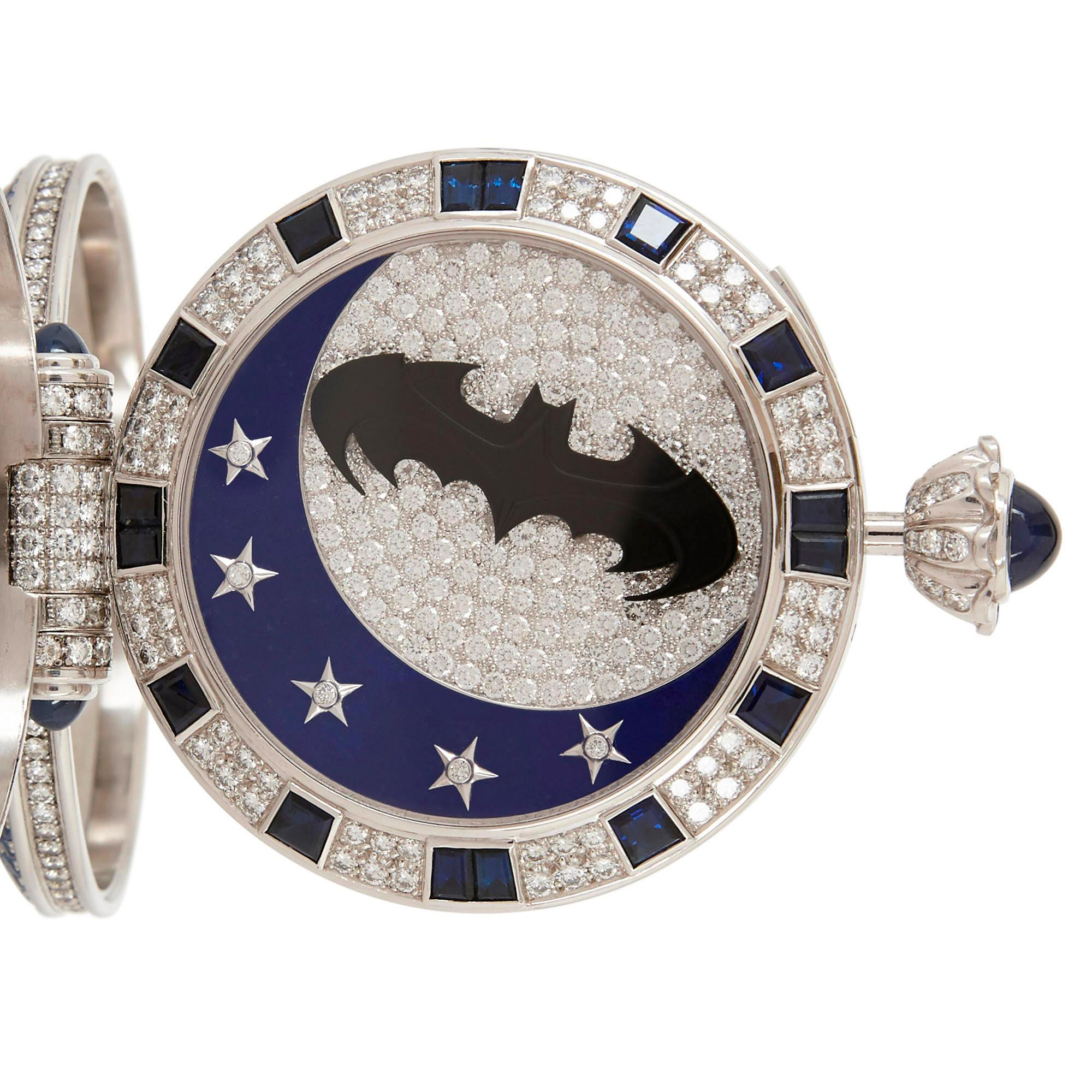 Who Audemars Piguet Batman Night and Day watch was created for is cloaked in mystery. The luxury watchmaker certainly took incredible care with this automaton watch. Thousands of precious gems were built into the watch, and the Batman symbol is actually a moving automaton, which flutters up and down against a moon made of diamonds.

The watch is currently being listed by the Mayfair Gallery, an art and antiques dealer based in London. We talked to a spokesperson at the gallery, but they were unable to provide any additional details on the watch’s origin. We’re waiting to hear back from Audemars Piguet regarding the original owner of this timepiece, and we will update this story if we learn more.

The only clue we have to its provenance is the back of the watch. The words “DC Comics 1998” is engraved in tiny print at the bottom of the case below the watchmaker’s name. The case is numbered “D 94947” and the movement is numbered “366996.” The watch itself was completed back in 2002 when it sold for $970,000 Swiss Francs. 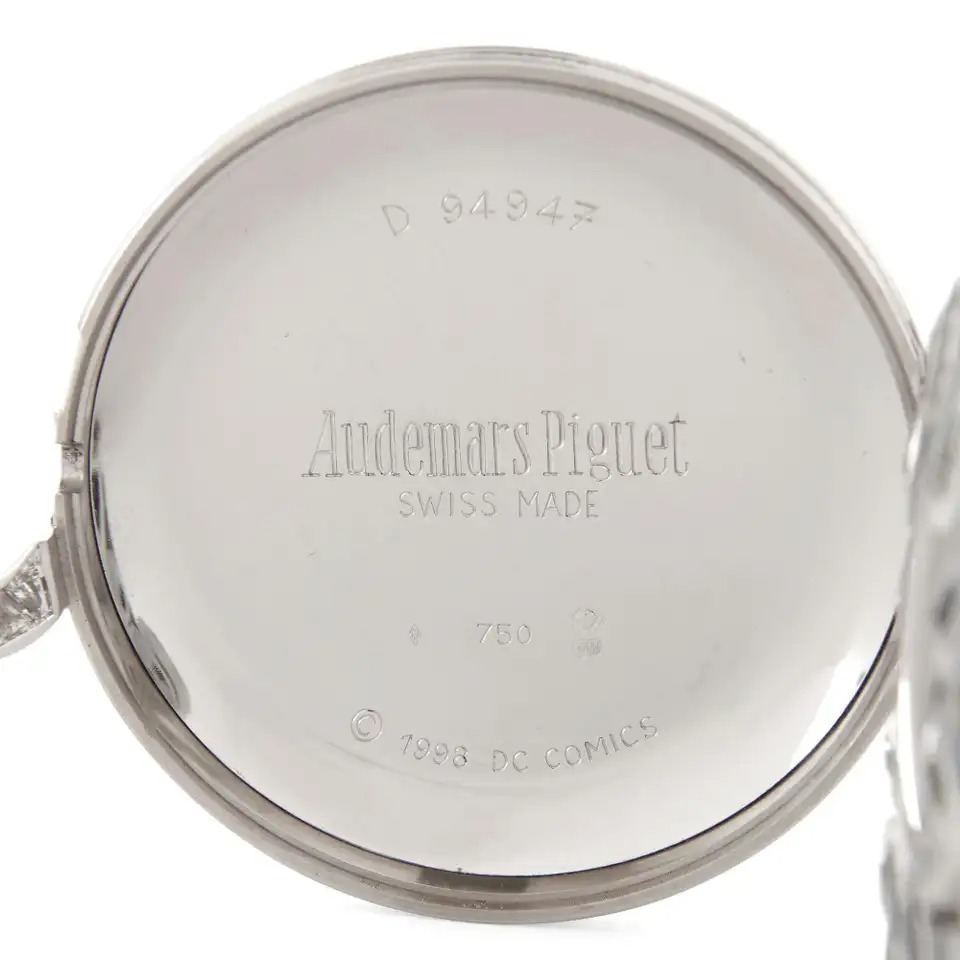 Let’s talk about the rest of this watch, if you can even call it that. Calling this creation a pocket watch is like calling an owl a T. Rex. Maybe if you squint, there’s a resemblance, but not much of one. The body of this automaton watch is made from 18 carats of white gold, a soft, malleable metal that works well as the base of a diamond and sapphire mosaic. Overall, almost 1,600  diamonds and sapphires were used to create the scenes on the watch’s exterior, the watch face and the bezel. All those stones then add up to almost 38 carats of diamonds, and almost 60 carats of sapphires.

The front and back of the watch show a brilliant night-and-day scene. On the front, you’ll find a bright blue background created from hundreds of tiny sapphires, a yellow pave sapphire sun and a fluffy cloud made entirely of diamonds. 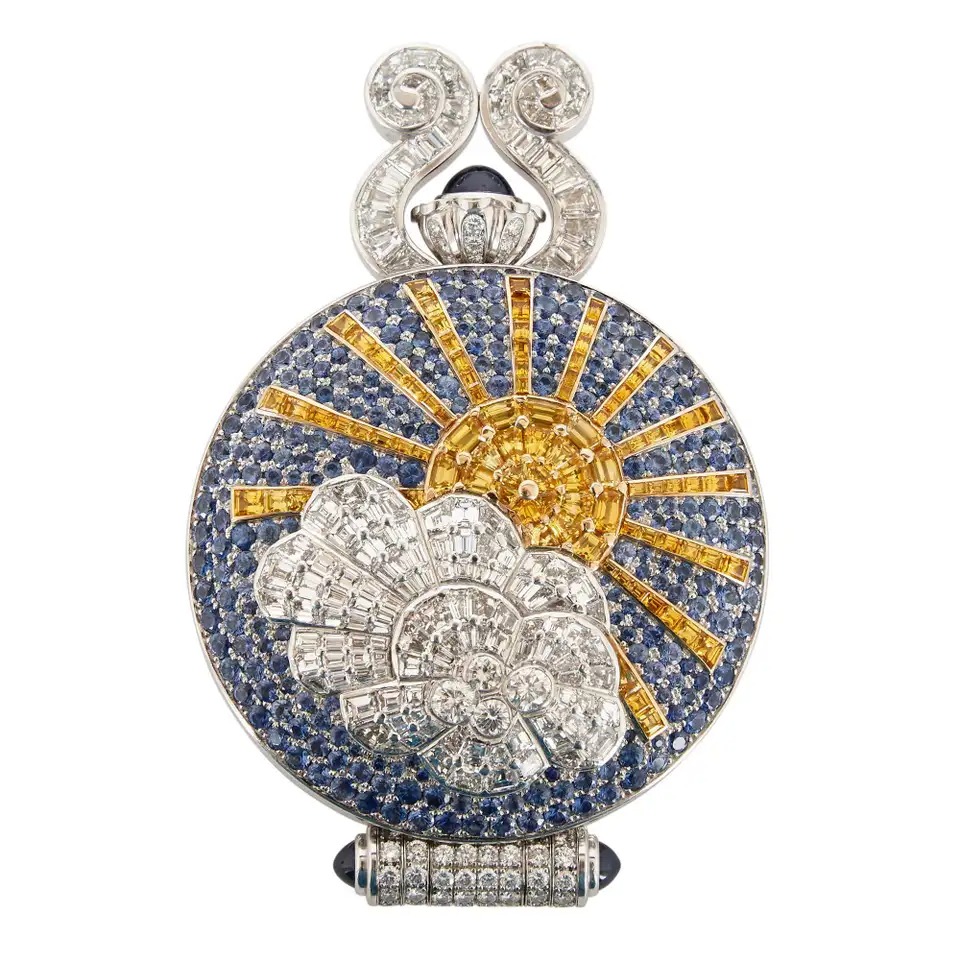 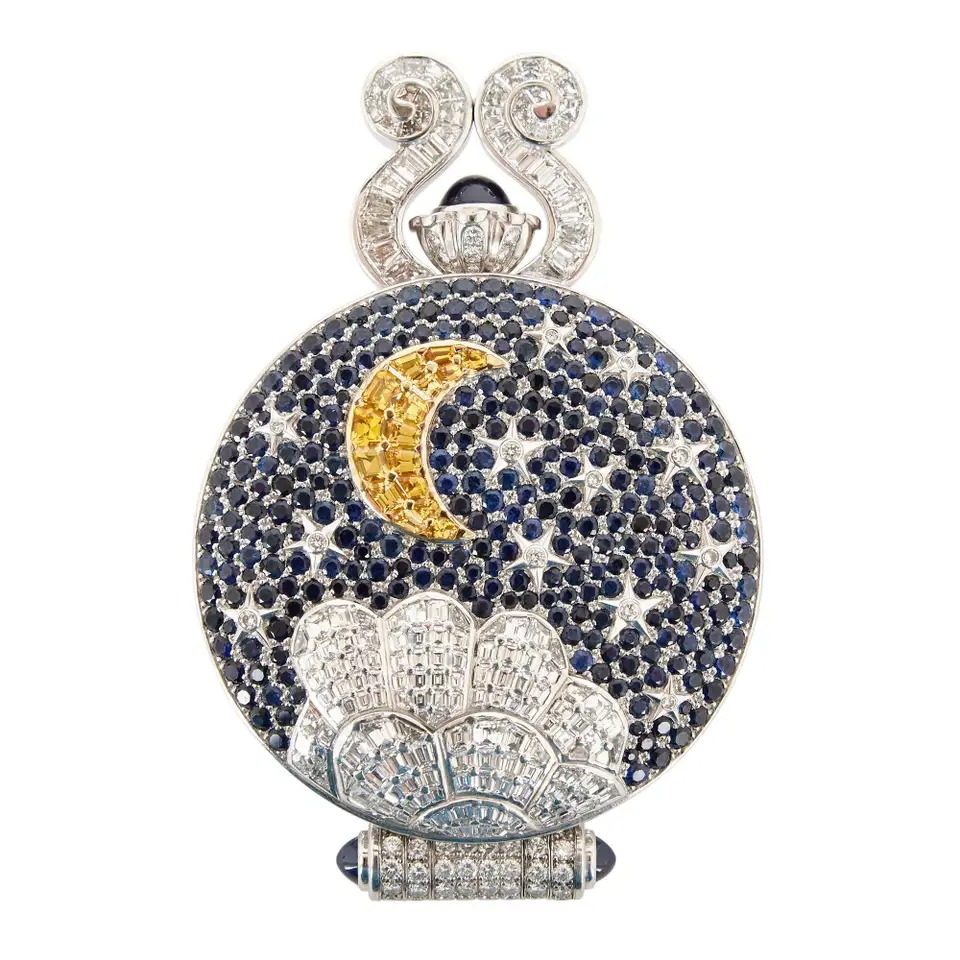 The reverse side is an artistic night scene made with deeper hued sapphires, once again pave set, with twinkly diamond stars interspersed throughout the night sky. Amidst all that is a yellow diamond quarter moon, and below it a high-rise cityscape. The top fluted catch and bottom hinges are encrusted with diamonds and cabochon sapphires.

And, yes, it also tells the time. 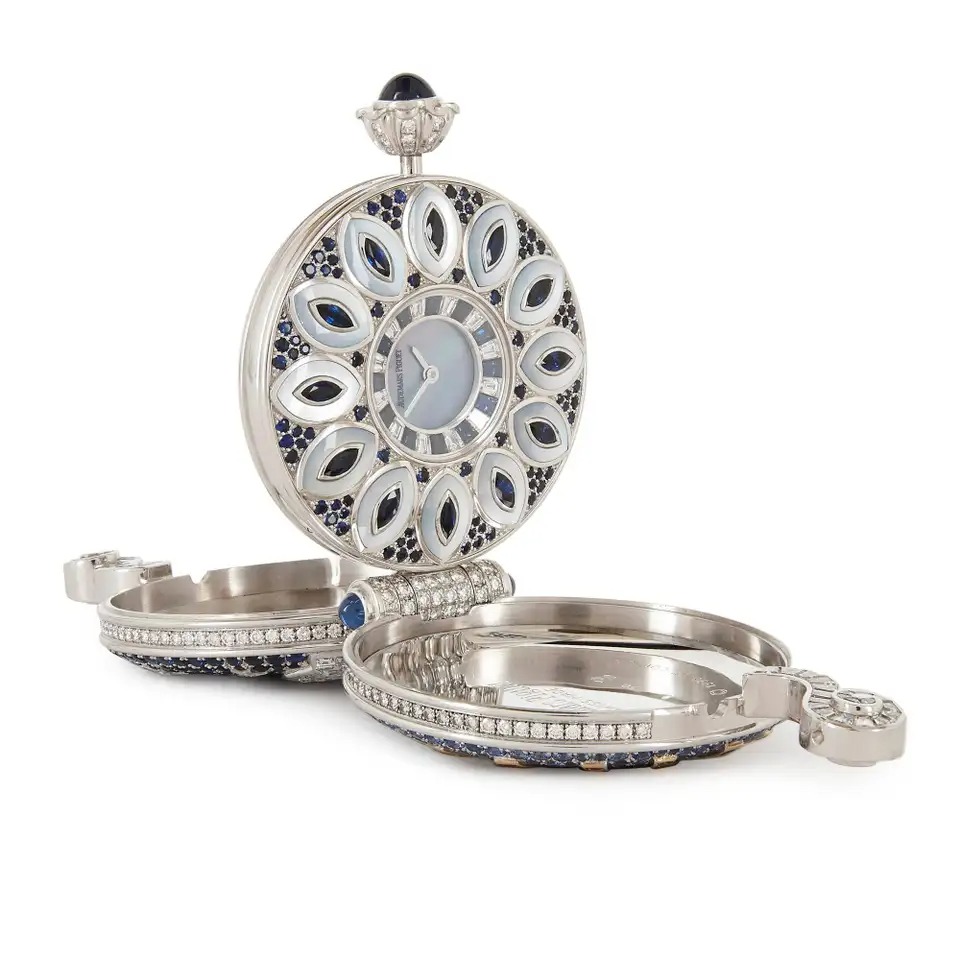 The crown is topped with a sapphire cabochon and its engraved and fluted stem is dotted with small diamonds. The watch’s dial is highlighted with marquise cut sapphires set in a mother of pearl frame on a sapphire pave background. Emerald cut diamonds and sapphires frame the watch’s dial. Sadly, the watch doesn’t have a second hand. 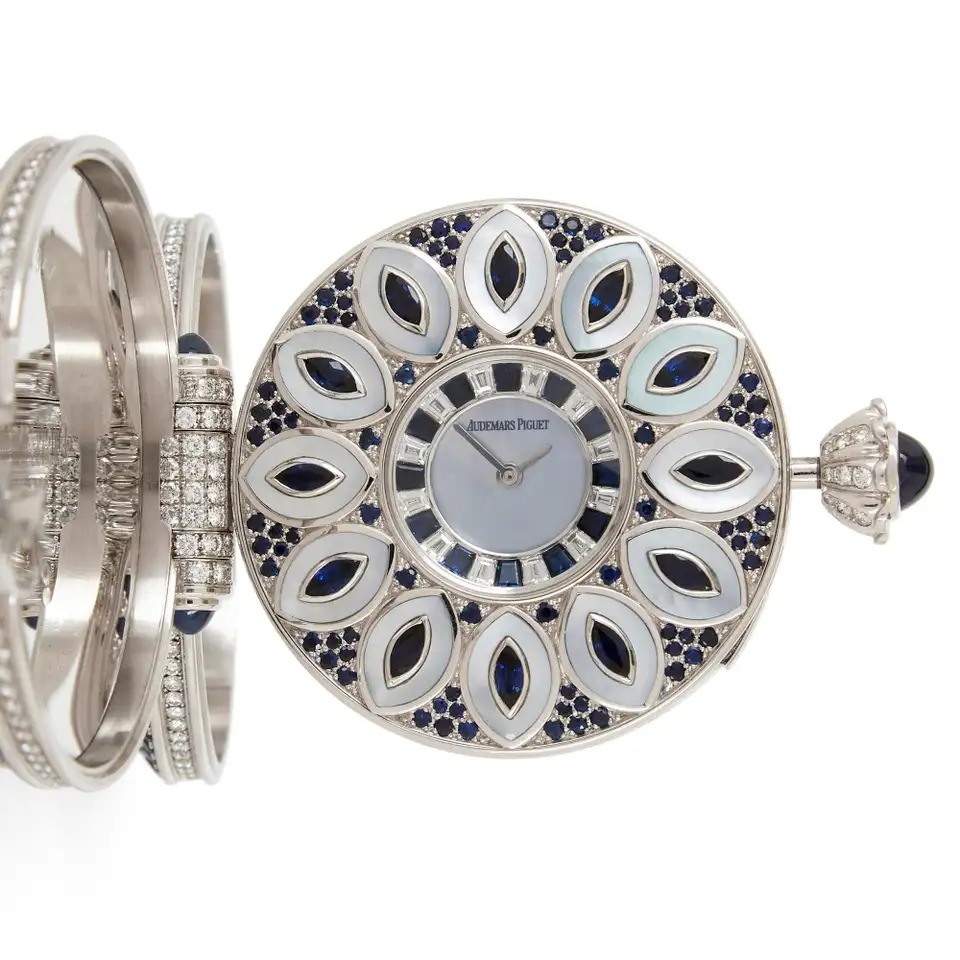 The flipside of the inner watch is where you’ll find the Batman automaton. It’s an enamel bat signal lit up against a huge diamond moon that almost engulfs a blue enamel night sky. The bat automaton is activated by a slide on the side of the case. 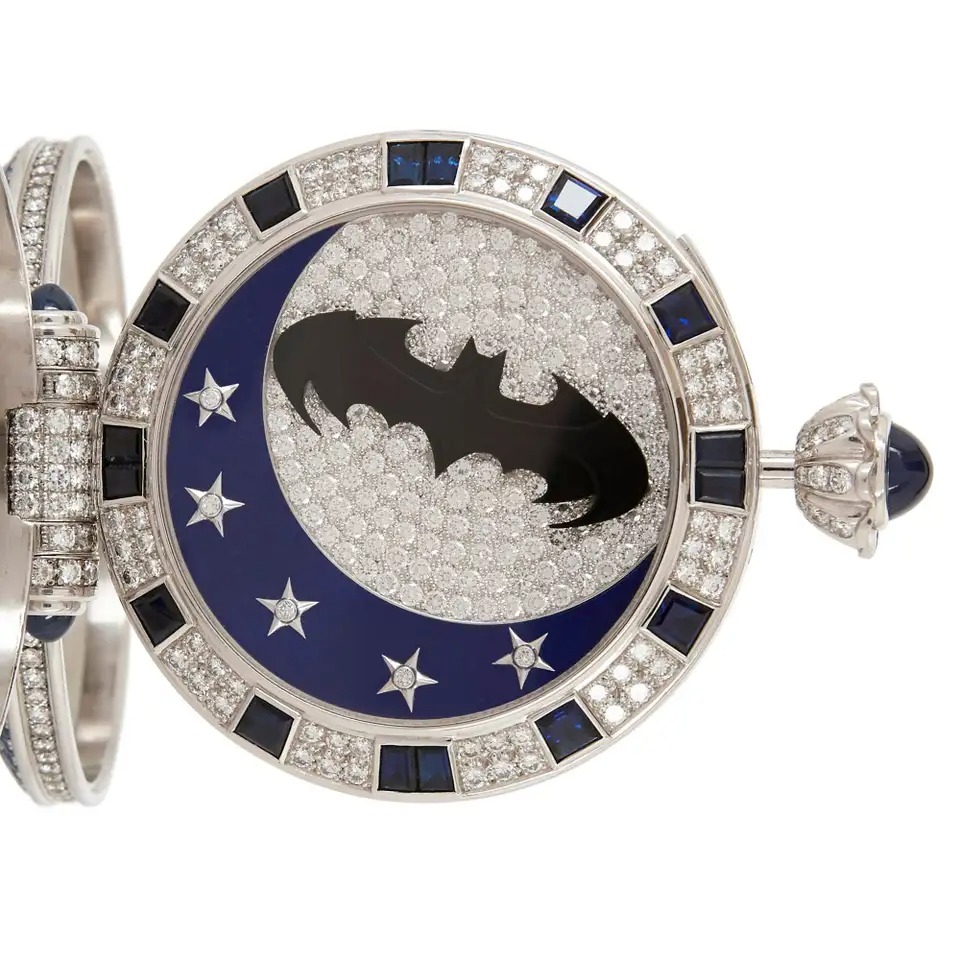 There are very few watch companies that create automaton watches. Jaquet Droz has wristwatch automatons that they debut every year at Baselworld. One of their most famous automaton watches shows two birds hovering over a nest filled with baby birds and an egg. When the automaton is triggered, the birds move, the egg cracks open, and up pops a baby bird. 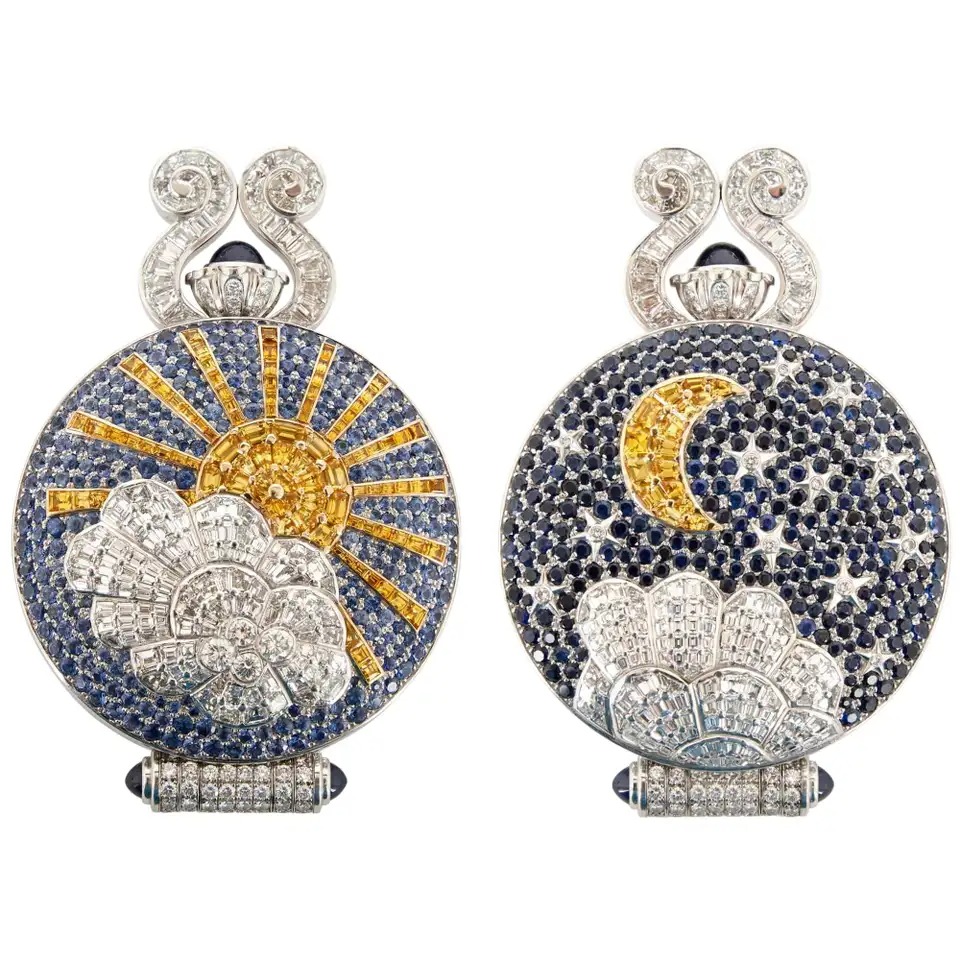 This Batman Night and Day watch is a rarity, not only because of its materials, or the fact that it’s an automaton, or that it’s made by Audemars Piguet. We’ve never seen a luxury timepiece like this before. It’s only hit the auction block once before back in 2015. At that time, the asking price was between $220,000 to $320,000 Swiss Francs.

This mix of art, gemology and science is on sale at 1stDibs, via the Mayfair Gallery, as we speak.

Buy Now
The Best Men's Watches of the Year