While we all may be commuting less than usual at the moment, that doesn’t preclude the fact that commuting by bicycle is more popular than it has been in decades. More and more people are swapping four wheels for two in an attempt to stay fit and save the environment. But, there are certain things that make bike riding to work slightly less convenient, and one of those is the lack of cup holders for your morning coffee. If you miss sipping on your morning beverage of choice during your commute, consider investing in one of the best bike cup holders.

These cheap devices attach to your bike’s frame to hold a variety of beverages. Which one you choose will likely depend on the type of beverage you want to take on your bike rides with you. Let’s take a look at the options.

No matter what type of beverage you want to take with you on your bike rides, we’ve found the best bike cup holders for you. Read on to find out more about the nine best options available for purchase online.

We recommend the Kemimoto Bike Cup Holder over the other options on our list due to its fully customizable and easily changeable design. The soft pocket can be attached securely to any bike thanks to its three velcro loops. These should be positioned in a triangular design for stability, and when you’re done using your cup holder, you can simply remove it from your bike. In addition, the top of the cup holder can be adjusted to hold a variety of different cup and bottle sizes. In addition, two mesh pockets on the front of the cup holder allow you to store your phone, earbuds and other small items. 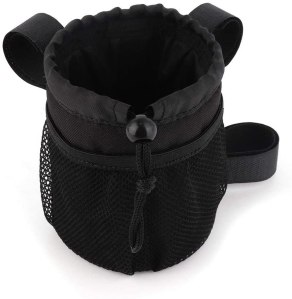 The USHAKE Water Bottle Cages are the OG of bike cup holders. While they aren’t designed to hold your coffee mug, they will take care of most types of water bottles during your ride. They’re made from aluminum and super lightweight, so you won’t even notice they’re attached to your bike. However, these water bottle holders do require pre-drilled holes in your bike’s frame, as they are attached using screws and washers. 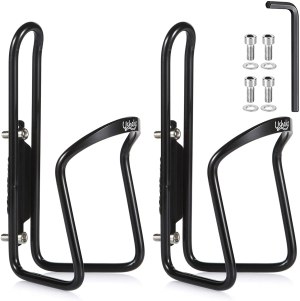 If you want to keep your drinks warm or cold during your entire ride, you need a cup holder that’s thermal insulated, like the MIZATTO Bik Cup Holder. This soft bike accessory has a PEVA thermal insulation layer to ensure your drinks remain at just the temperature you desire. In addition, the holder itself is made from durable Oxford cloth and boasts three velcro straps for easily attaching and removing it from your handlebars. 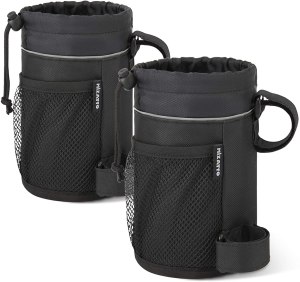 If you’re anything like the average bike commuter, it’s not just your coffee that you need to place in a cup holder during your daily rides. Most people need somewhere to put their phone, too. That’s why the Accmor Universal Bike Cup Holder includes both a cup holder and a phone holder. The holder can be attached to your bike (or stroller) using the integrated clamp, which can rotate 360-degrees for total customization. This bike cup holder is available in six different colors. 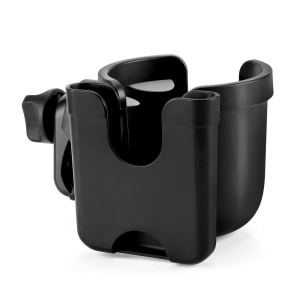 One reviewer of the Portland Design Works Bar-Ista Coffee Cup Holder said that it’s helping him “indulge his inner hipster.” If that’s something you want to do, too, we recommend giving this attractive cup holder a try. The matte black holder can be attached to 26-millimeter handlebars, and the tapered ring is designed to hold most coffee cups and travel mugs. However, be warned that this cup holder isn’t able to hold standard canned drinks. 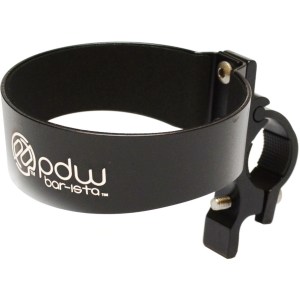 Bike cup holders don’t have to be a super-serious addition to your bike. In fact, they can add a bit of fun to your cruiser. If that’s what you’re after, check out the Yoyoapple Bike Cup Holder. This pleasant pineapple is the cheery addition you need on your ride to the beach this summer. The hefty aluminum clip and bolt ensure this cup holder will last more than one season, and the cup holder itself can handle most standard bottles, cans and coffee cups. 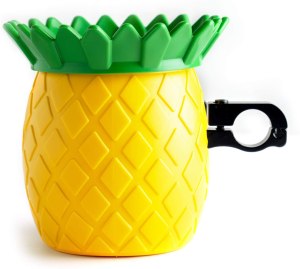 The N&M Products Cruzies Bike Cup Holders have several features to justify their slightly higher price. First, the metal bracket is sturdier and longer lasting than velcro straps. Second, the stainless steel cup holder is fully encompassing, meaning it can hold most cans, bottles or cups. And, finally, this cup holder comes with a foam insert to keep your drinks cold throughout your bike ride. All in all, this is a great way to upgrade your bicycle. 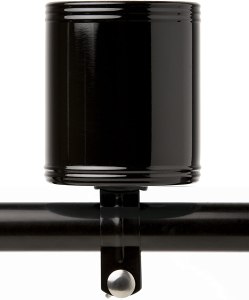 If you’ve read this entire list so far, you’ll have noticed that most bike cup holders tend to be black and made of metal, nylon or plastic. However, the DrinkSlings Personalized Bicycle Cup Holder departs from the traditional with its leather construction. As an added bonus, this drink sling can be personalized with your name and a stamp of your choosing, including flowers, skulls, stars and suns. 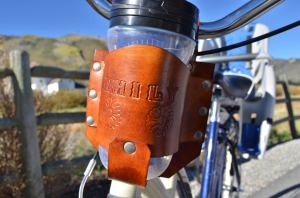 The Most Stylish and Functional Cycling Commuter Backpacks