Mom said that you should always wear a hat when it’s cold outside. Experts agree that wearing a hat in cold weather keeps the rest of your body warm. But they’re forgetting something. Hats are fun. Hats are distinctive. Frank Sinatra’s hats were as famous as he was. Would Humphrey Bogart’s Sam Spade have been as cool without a hat?

When you think of LLCoolJ, you think of his multitudinous Kangol bucket hats. And if we’re going old school now, Eric B and Rakim wore ‘em too. And if you wanna get really, really old school Gilligan and Hunter S. Thompson wore bucket hats. If Pharrell Williams and Paul Thomas Anderson are rockin’ bucket hats now, then yah, bucket hats are a pretty awesome item to own.

Why wear a bucket hat?

Bucket hats can add a little somethin’ somethin’ to whatever you’re wearing. A bucket hat in a clever print lets people know you’re a friendly extrovert. They can also hide a bad hair day or bad hair cut (thanks Corona!). They can protect you against sunburn, and stop the sun from getting in your eyes and ruining your shot. And yes, if the weather’s crappy, they’ll keep the rain or sleet or snow or whatever off your head and your face.

What is a bucket hat anyway?

Originally, they were popular with farmers and fisherman in the early 1900s. The original bucket hats were made of wool and coated with lanolin. That coating made the hats waterproof. Perfect for tromping around in fields on sitting in a boat during rainy or foggy weather. The Israeli Defense Force used them back in the 40s when they’re fighting in the desert. They still use bucket hats today. Actor Jimmy Walker wore one in the TV Show Good Times back in the 70s. Fast forward to the late 80s and early 90s and rappers wore them, usually Kangol on stage and in videos. Movin’ on to now, Jay-Z has been known to doff a bucket hat, as does Eminem, Tyler the Creator, Diddy, Justin Bieber and even Jean Claude Van Damme. Really.

This tie-dye bucket hat with contrasting trim is adorned with artwork from the late Jean-Michel Basquiat on the crown.  Wear it to art gallery openings or when playing pool. 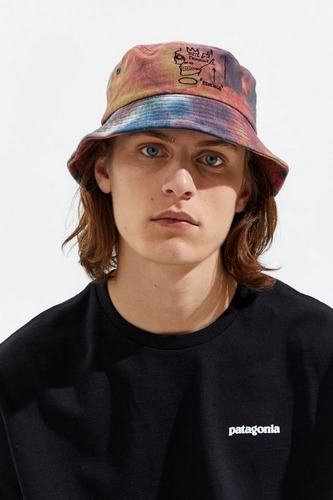 Say hello to the hat that started it all. This could be the best bucket hat as the style is well over 30 years old, and it still looks great. This is the wool version (it also comes in navy and black), but you can also pick up the cotton version in six different shades here. 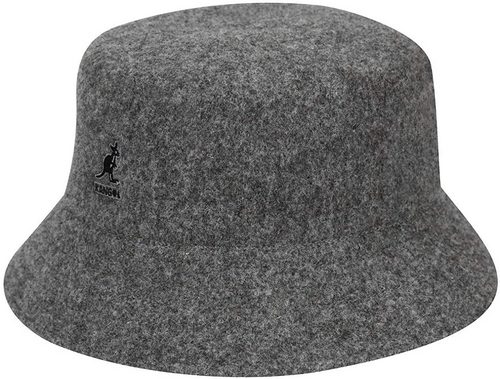 BEST TASTE OF THE TROPICS

Made from recycled nylon, this tropical print bucket hat can be worn in the water — Marco Polo anyone? — or doing anything on dry land. 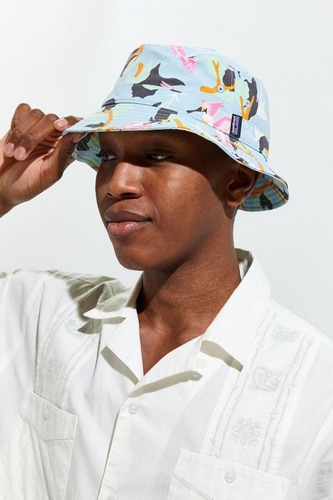 UK-based ASOS creates trendy stuff so you can look slick while your wallet stays full. This could be one of the best bucket hats as it looks way pricier than it is. 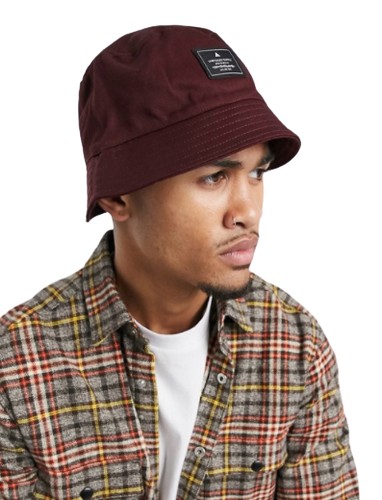 Japanese streetwear brand NEIGHBORHOOD’s been around since 1994. On par with BAPE and WTAPS, they didn’t hit our shores until pretty recently. The brand draws on rock and motorcycles subcultures with a dash of pop culture for inspiration. This paisley bandana printed bucket hat has been treated with a red tinge to some parts of the hat, while other sections have been given a washed-out patina. 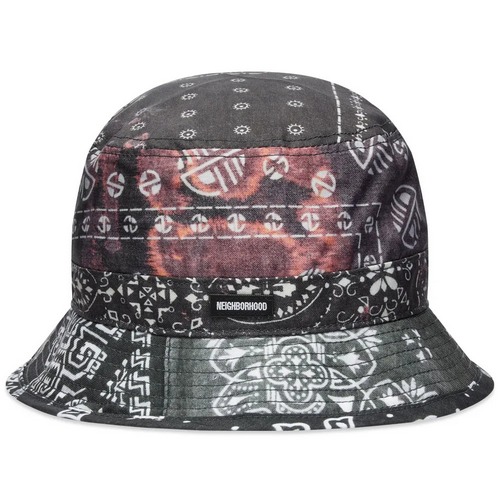 “Who wants a G&T?” Doesn’t the hat look like it’s saying that? Then again, who wouldn’t want a gin and tonic on a hot day? Made of cotton, this bucket hat has the ubiquitous polo player embroidered on the crown. It’s the type of hat that’ll still look good 10 years from now.

Hop on the animal print trend with Blue Crown’s leopard bucket hat. Channel the 70s by wearing it with a black turtleneck, or make it very modern with a graphic tee, jeans and Chelsea boots. 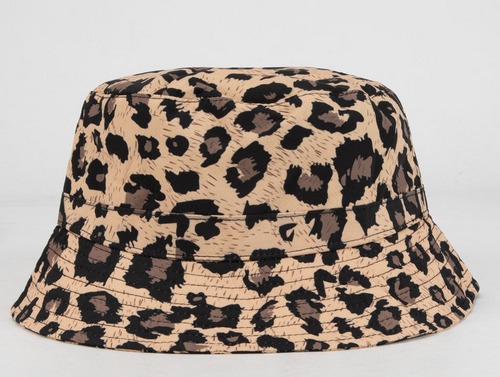 If you get bored with the paint-spattered print on this bucket hat, turn it inside out. The hat’s reversible, so you can wear the khaki green lining as a hat too. 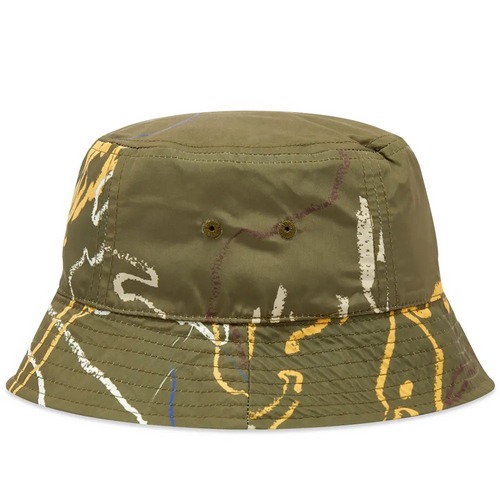 Made from lambskin, this bucket hat can be worn all year round. The pink shade’s great for every skin tone, and if you’re ever hungover, pop on the bucket hat, as the hue will make your skin look like you’re doing fine. 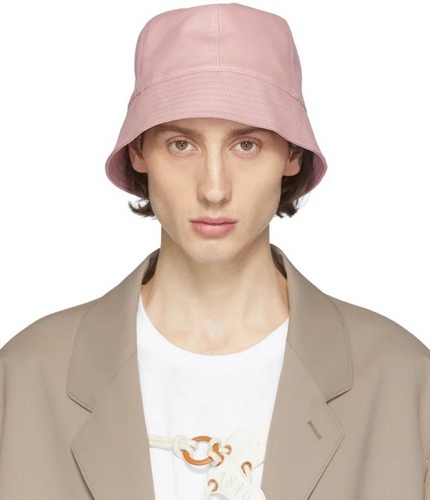 Coalatree started out as an organic farm in Colorado and created its first line of eco-friendly clothing back in 2010. This lightweight bucket hat is fast drying and has an adjustable chin strap. Perfect for urban and mountain hikes. 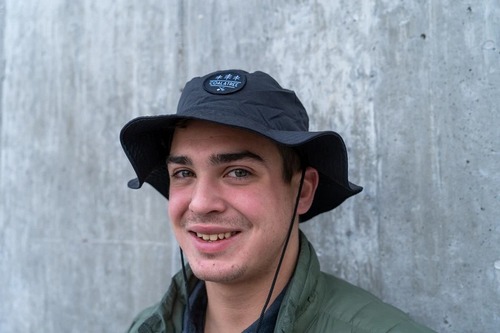 Why go with one color when so many of them are equally awesome? Mining 90s skate and surfwear as inspiration, this bucket hat and a board is all you need when you’ve got a day off to bust some kickflips. 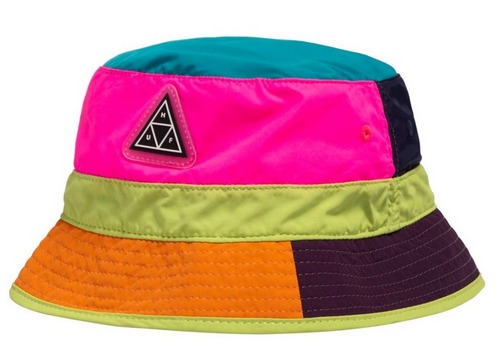 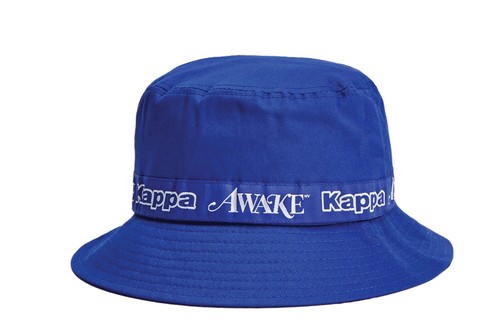 The Best Types of Hats for Every Type of Man