The best chronograph watches are a work of art. However, these watches also contain some pretty impressive science, too. If your chronograph boasts a tachymeter (the movable bezel), you can even calculate speed and distance. Chronographs have separate dials, called complications, that are used to measure the tenths of a second, seconds, minutes and even hours. Chronograph watches usually have three buttons on the crown that control the stop, start and reset motions of those dials.

If you’re stuck in a meeting listening to Chuck from accounting drone on and on about decimal points, break up the monotony (and keep yourself awake) by using the chronograph watch to time how long he’ll talk before someone interrupts him.

A Brief History of the Chronograph Watch

Did someone wake up one morning and decide to make a watch that calculates everything? Well, basically. The first chronograph was designed as an astronomical tool to assist sailors in 1816 by Louis Moinet. In France during the Bourbon Restoration, King Louis XVIII adored horse racing, and going to the races became a big social event. Nicolas Rieussec, one of five official watchmakers to the king, created a device that could accurately time how fast a horse ran a race. Housed in a box, he named it a chronograph, and before you knew it, chronographs became chronograph watches.

Back in 2007, President Barack Obama’s security detail gave him a Jorg Gray JG6500 black chronograph men’s watch for his birthday. If you look at photos of his presidency, that watch was regularly on display. In A View to a Kill, James Bond (Roger Moore) wore the Seiko 7A28-7020 Chronograph. Actor Joel McHale wear Glashute’s chronographs, Patrick Dempsey prefers the TAG Heuer Monaco Calibre 12 Chronograph, and he’s also one of the brand’s ambassadors. Lebron James owns the Audemars Piguet Royal Oak Offshore 25th Anniversary Chronograph Tourbillon.

Why do people go bonkers over these watches? Aside from the insane craftsmanship, sharp looks and utter coolness, the best chronograph watches are also a good investment. Some watch companies make limited edition watches or will stop production on a model, and when they do, the prices go up, up, up. Here’s a quick example: Swatch watches were brightly colored plastic watches that were extremely popular in the 80s. They were priced between $19.99 to $40. Now those watches can be purchased anywhere from $300 to $850.  One recently fetched almost $10,000 at auction.

Older chronographs like a Patek Phillipe 18K Perpetual Calendar Chronograph went for $96,769.80 in a recent auction, and a signed Rolex Oyster Cosmograph Chronograph was sold for $290,309.40 recently. Fortunately, many luxury watch brands like Omega and Rolex have what they call “starter watches” that can be purchased in the low thousands.  And, remember, the lowly Swatch is now worth a nice chunk of change.

All Citizen watches are powered by Eco-Drive technology, which uses solar conversion to power an energy cell that can harness any type of light. Your Citizen watch may have a longer shelf life than you do, and it will never need to be recharged or require a fresh battery.  When the watch is completely charged, it will run for 6 months before it needs to be powered again. On top of that, it still has all of the features you expect from the best chronograph watches for men. This chronograph has Japanese quartz movement and is water-resistant to 333 feet. The 1/5 second chronograph will measure up to 60 minutes, 12/24 time, the date and boasts a tachymeter. The deep blue and cream watch face nicely complements the brown leather strap for an elegant, sophisticated and masculine design. 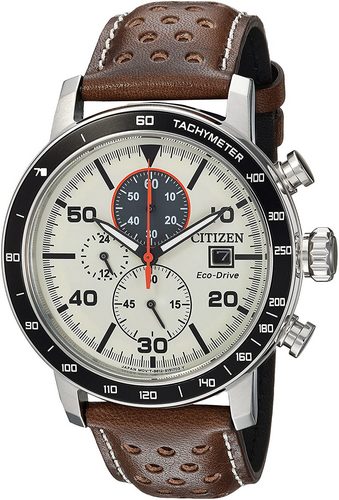 Based in California, Jorg Gray’s been creating watches since  1998.  This model is the commemorative version of President Obama’s watch. There’s engraving on the watch’s back stating that. It’s 41mm, has quartz movement, a scratch-resistant mineral crystal, water-resistant to 330 feet and a leather band. 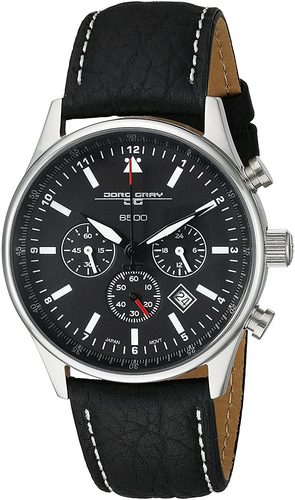 3. Omega Speedmaster Dark Side of the Moon ALINGHI

One of the hotly anticipated watch launches of the season, Omega in partnership with ALINGHI has just launched this chronograph watch. If it could walk, it would swagger. Emblazoned with boat racing team’s colors and swirling logo, even non-mariners are falling in love with this chronograph watch.  It has a  44.25 mm case in black zirconium oxide ceramic. Designed to mimic the racing boat’s hull, the barrel bridge and mainplate has a honeycomb effect created by laser ablating. The logo rotates when the chronograph function is in use. The watch houses a Calibre 1865, a thin and light winding movement favored by sailing crews. 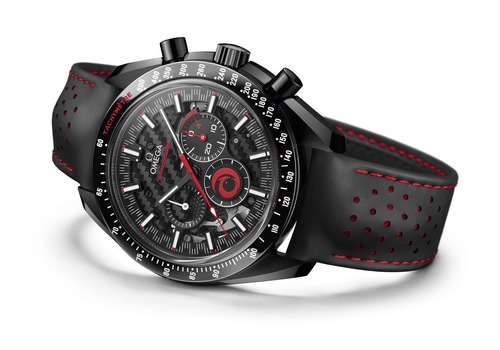 Omega Speedmaster Dark Side of the Moon ALINGHI

Headquartered in Queens, New York (Little Neck, to be exact), Armitron’s been making watches since the mid-1950s. They have a reputation for making dependable and long-lasting watches that are affordable. They were one of the first to have LED powered watches that had a digital readout/face. They’re as beloved as Casio watches and just as good. The black resin rectangular case measures 37mm x 43mm, has an LCD face, tracks the day and date, alarm, lap timer, and is water-resistant to 330 feet. 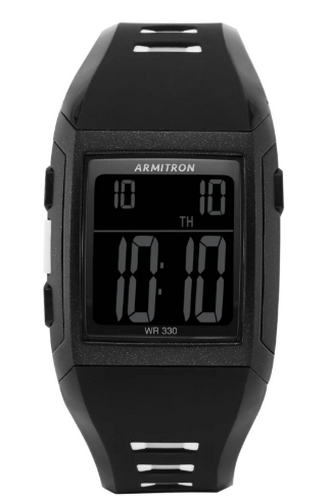 Shopworn’s an e-commerce site that offers great deals on luxury watches. All their wares, like this Hamilton chronograph watch, are brand new. Normally, this luxe watch retails for is $1,300, but because Shopworn acquires items from brands and authorized dealers who couldn’t move their inventory, their loss is your gain.  It has a date window, day and night indicator (at 6 o’clock) 45mm case, Calibre H-41e Swiss Chrono Quartz Movement, rubber strap, and unidirectional rotating stainless steel bezel. The chronograph can display time in a different time zone. 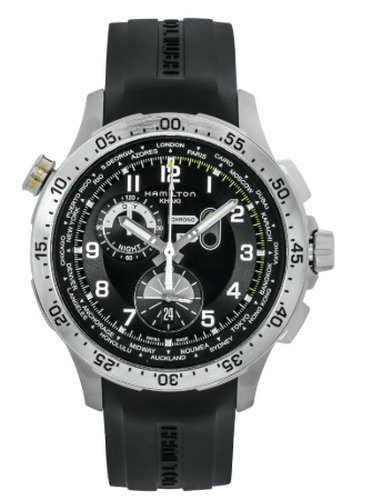 BEST WATCH THAT LOOKS LIKE IT OWNS A MOTORCYCLE

Speaking of Swatch… their yellow tire chronograph watch is eye candy with a 42mm case, texturized rubber feeling strap. Use the chronograph watch to time laps, check speed and distance. There’s also a calendar to remind you what the date is. 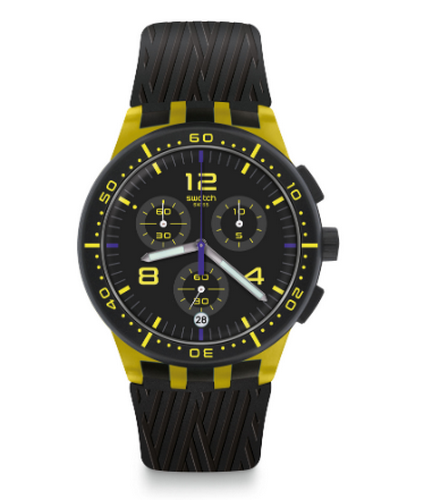 The blue, orange, and gray stripe nylon NATO band highlight’s the chronograph’s 43mm face. The stainless steel case measures 43mm, has Swiss quartz movement, said crystal is a scratch-resistant sapphire, and the bezel rotates. This chronograph watch can measure hours, minutes and seconds even under 660 feet of water. 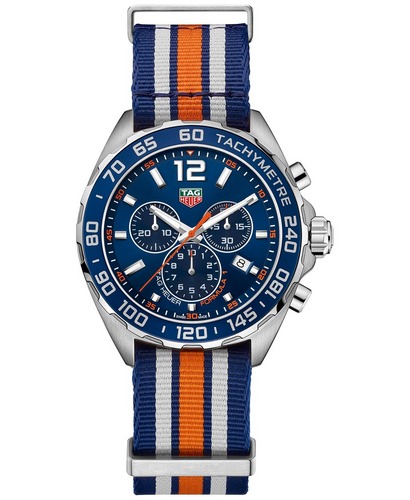 Timex makes solid, durable watches. Need a watch that will keep track of your times and wake you up in the morning? The reasonably priced Ironman Transit will suit your needs. It’s a digital chronograph that’s 40mm, and it’s water immersible to 100 meters. It has a light-up dial, countdown timer, alarm, and a stopwatch with a 10 lap memory. The nylon band has a hook and loop fastening, AKA the fast wrap. 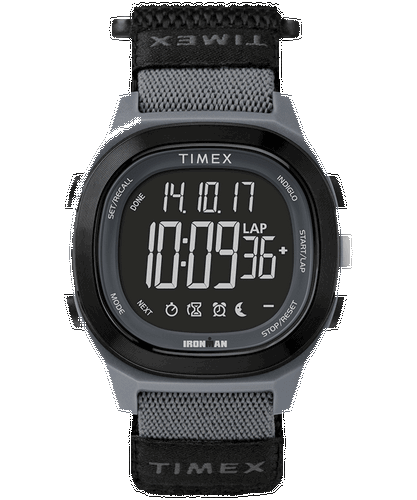 If the Navy SEALS use something, you know that whatever it may be, it’s the best out there. Considered the official watch of this elite team, this chronograph watch can survive anything and everything. The black rubber strap is attached to a 45mm CARBONOX case, which has a 316L stainless steel case. It also has a tempered scratch-resistant mineral crystal, rotating bezel, and a protected colored light tube (at 12) with a sapphire crystal. And it’s water-resistant to 660 feet. 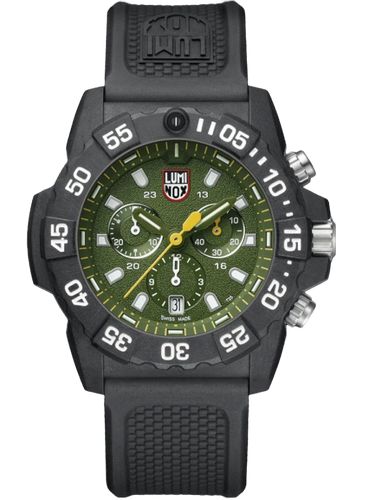 The best chronograph watches have a distinct look, and this watch is certainly distinct. Based in Switzerland, Rado launched the first-ever scratch-resistant watch, the DiaStar in 1962. They’re a luxury watch leader whose innovations are legendary. Normally priced at $2,700, this sexy looking chronograph watch is a steal, and it will pair beautifully with your favorite white sneakers. It has a 44mm case, sapphire crystal and measures hours, minutes, seconds, small seconds and the date. The watch bracelet is polished white ceramic. 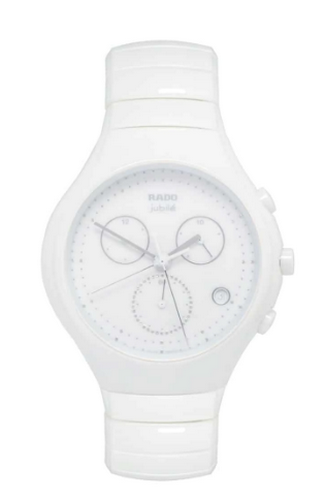 Based in Miami, LIV came into being in 2012, creating Swiss watches and selling direct to the consumer.  In 2014, they used Kickstarter to fund their first custom watch model, and within 12 hours it was completely funded.  They frequently launch new watches on Kickstarter, so you may want to keep an eye out for their new items. Their LIV GX1 T.J chronograph’s almost robin’s egg blue face makes the numbers and dials pop. It has an anti-reflective sapphire crystal and utilizes a Swiss Ronda Caliber 5040.D.  It has a three-hand quartz chronograph. If you’re on the fence about this sweet looking watch, think fast as they’re only making 500 of them. 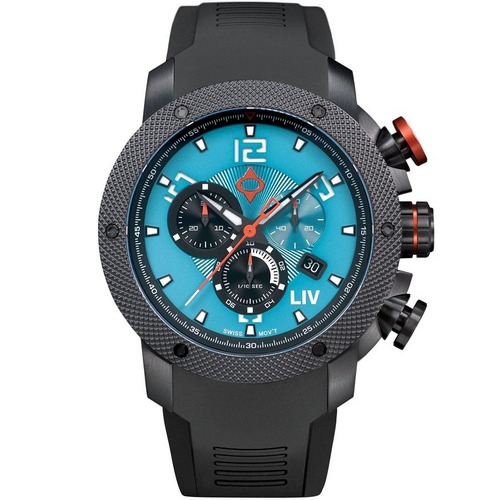 Texas-based Tockr watches are inspired by aviation, hence the name “Air Defender.” The worst thing about this watch brand is that they give you the option to play with the finish, dial and strap. It’s very bad, because you may spend (I did) a ridiculous amount of time and money playing with this feature. Anyway, This 45mm chronograph has a date/date window, a 42-hour power reserve, 100-meter water-resistance, is Swiss-made and comes with a two-year guarantee. 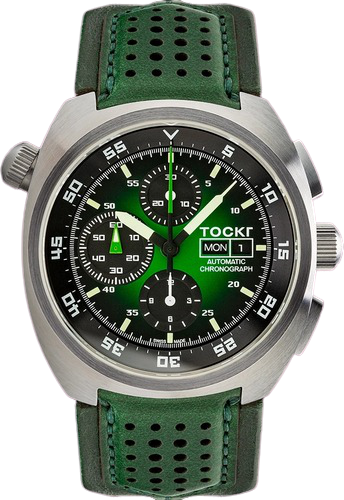 Casio’s got a stellar rep and a decent price point. People go bananas over their G Shock series, and their chronographs won’t disappoint. This orange monster has a 49.3 mm case, is water-resistant to 330 feet, has quartz movement, a stopwatch and a 12/24 hour subdial. 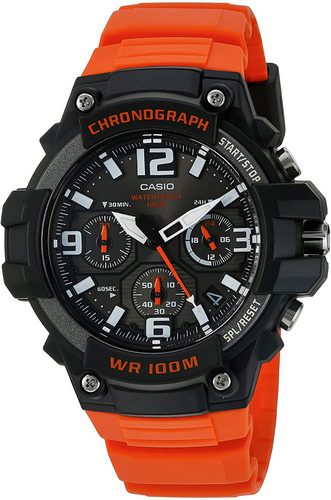 FOR THOSE WHO LIVE FAST

Inspired by the world-famous races, the second hand is bright orange and pops nicely against the blue dial. It has quartz movement, 43mm stainless steel case, a date window, a scratch-proof sapphire crystal and packs a driver extension on the clasp that can be worn over a driving suit. 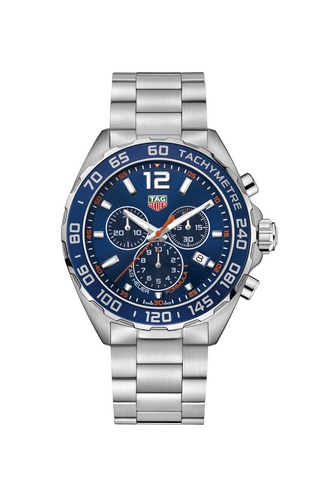 There are men’s chronographs for every budget and need. Even if you just love a good looking watch, you can find a smart-looking chronograph watch.

There are the Flyback, rattrapante, tourbillion, automatic and digital chronograph watches. The Flyback has a timing hand that can be reset quickly. The rattrapante has more than one-second hand and they can work independently. The tourbillion is what’s called an escapement, that’s a mechanical linkage in mechanical watches. Parsing it down, they’re used to minimize gravity and increase precision.  Automatic chronographs use solar energy for power, while digital chronograph watches use batteries.