Erasable pens may not have become the office essential they were poised to be, but they’re still a great option for some writing tasks. An erasable pen offers the dark lines of a standard ink pen, with the ability to be erased like a pencil. While most writers are content to simply cross out mistakes, sometimes the neatness of erasing a written line can come in handy. If you’re filling out a personal calendar or writing a card, for example, you might want to avoid the messy look of crossed-out lines and White-Out.

Of course, just like any bit of stationery, not all erasable pens are created equal. Erasable pens use a variety of different technologies to remove visible ink from the page, all of which have their own pros and cons. Thermosensitive inks become transparent at high temperatures, so the friction from the eraser can cause these inks to “erase.” Another option is rub-off ink, which is physically lifted from the page, similar to the way an eraser removes graphite from a pencil. This in-depth guide from JetPens makes it easy to see the benefits of thermosensitive, rub-off and other erasable ink types.

We’ve rounded up some of the best erasable pens that you can buy online, including options from Pilot, PaperMate and Uni.

The Pilot FriXion is one of the most popular erasable pens, and that’s because there’s a lot to love about these pens. They have a soft textured grip that’s easy to hold, and the pocket clip also doubles as the retraction mechanism. The bottom of the pen has an eraser. Seven gel pens are included in the pack. 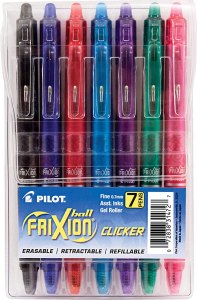 If you prefer a rollerball pen, the FriXionBall erasable pen from Pilot is a great option to buy. This pack includes two pens, which are capped, rather than clickers. Like Pilot’s other FriXion pens, these pens use thermo-sensitive inks. However, users note that because the eraser is on the pen, rather than the cap, the cap has to be removed from the end of the pen before erasing.

PaperMate’s Erasermate pens are a great option if you’re looking for erasable ballpoint pens. Each pack includes 12 pens, so you don’t have to worry about having enough pens for the crossword. The pens are available in black, blue or red. 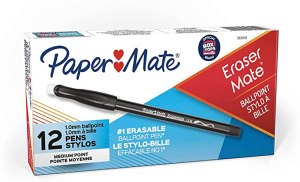 Whether you’re bullet-journaling or you like to color-code your notes, having a pen with multiple colors can be handy. This Frixion ballpoint pen includes black, red, blue and green, and the champagne-colored body makes this pen stand out more. The 0.5mm pens are a good option for those who like a finer pen.

The Uni R:E ballpoint pen is another thermosensitive erasable pen; the friction generated from the eraser causes the visible ink to disappear without leaving smudges and streaks. However, these pens can be fainter than the Pilot pens. 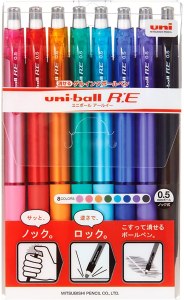 ParKoo isn’t as well-known a brand as Uni, Pilot or PaperMate, but they’re a popular option among fans of erasable pens. These pens retract using the clip, and the end of the pen has an eraser tip. Like others on this list, these pens use thermosensitive ink. 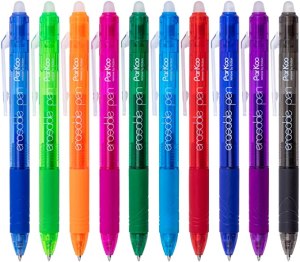 Buy Now on Amazon
The Best Pencils for Writing, Drawing and Drafting