While hardly the largest scandal to rock his presidency, Bill Clinton’s decision to sport a cheap plastic watch while in office was the most consequential controversy to the horological world. In his case, it was a Timex Ironman. But it’s the similarly chunky Casio G-Shock watch that’s proven to be an enduring icon, even among those who’ve never run a marathon or run for president.

The first G-Shock was introduced in 1983, when, according to Casio, designer Kikuo Ibe was inspired to create an unbreakable watch after breaking a pocket watch given to him by his father. Whether or not this exact bit of self-mythologizing is true, the story illustrates that function was the driver of the design of the Casio G-Shock. And, looking at the watch, you can tell. They’re all beefy and bulky, with rolls of rubber and bits of plastic jutting out in different directions, and G-Shocks are so-named for their shock and impact resistance.

While the guiding ethos of ruggedness defines all G-Shocks, for every G-Shock rule, there’s a G-Shock exception. These watches are known for their plastic builds and digital displays, but there are quite a few metal G-Shocks and a fair share of analog ones. They’re known for affordability, and while the bulk of them clock in within the $50 to $150 range, you can find G-Shocks that cost well over a grand. This is all to say that, with so many G-Shock models and new ones coming out all the time, there’s a lot to choose from. 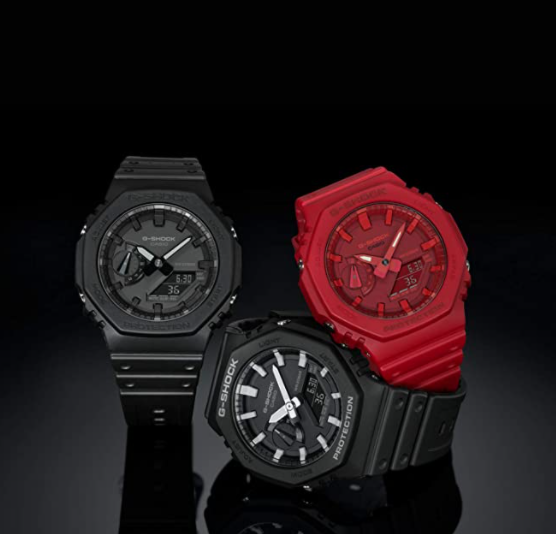 But the question remains, why are these (admittedly kind of ugly) watches so popular? Their durability is part of the appeal, but most of the brand’s wearers don’t need a watch that can survive being rolled over by a truck at their desk jobs. One factor is that the G-Shock operates independently of other horological trends. While wristwatches have vacillated between iced-out dinner plate-sized timepieces and ultra-slim dress watches, the G-Shock has carved out its own place in the watch world for the last 35-plus years. That means that they’re unlikely to go out of style anytime soon.

Another factor in their favor is that, while these watches are undoubtedly bulky, big and eye-catching, they’re not ostentatious. Where a Rolex or Audemars telegraphs luxury, a G-Shock, despite its size, sends a much more low-key message. They’re inexpensive watches, but their functionality keeps them from feeling cheap like some quartz watches do. And while they’ve been popular forever, G-Shocks feel especially suited for right now. That’s because they fit in with the trend for all things military-inspired and utilitarian. Whether it’s a liner jacket from Alpha Industries or slim-fit cargo pants, military inspirations, which have always been essential to menswear, have become more overt than ever. A watch that would actually be worn in the military fits in with this trend. There are a ton of options to choose from, and we’ve rounded up some of the best G-Shocks below.

It’s not the exact same, but the DW-5600 is very similar to the first G-Shock Casio produced. It features a durable and comfortable resin strap and a digital display. It’s by no means a small watch, but it is at the more compact end of the G-Shock range, making it a more versatile option. It’s water-resistant to 200m, and it has plenty of handy features like a multifunction alarm, a stopwatch, a countdown timer and a backlit display. 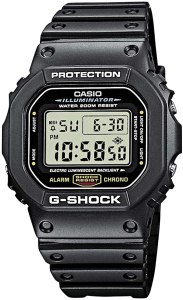 This watch features analog hands with a digital display that includes the day and date, and it’s packed with other features. If you’re prone to sleeping in, you can set up to five alarms on this watch. The case is made from durable resin, and the plastic bracelet has a perforated design that makes it more breathable and comfortable. It’s also available in a few different colors. 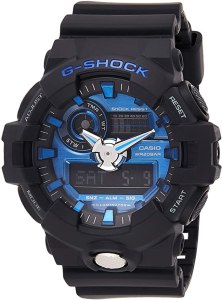 This G-Shock is on the smaller and simpler end of the spectrum, at least as far as G-Shock’s go. It has unique digital subdials above the time display. You can set a stopwatch, countdown timer and multifunction alarm. The display shows a digital readout of the time, including seconds, the day and the date. 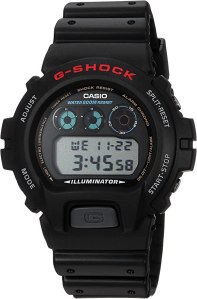 The blue and yellow colorway of this G-Shock makes it an eye-catching option, and the display is packed with handy features. It has four multifunction alarms and a snooze alarm, making it a great option for oversleepers on the go. Another feature that makes it a great traveler’s watch is that it has 29 time zones built-in.  Other standard features like a countdown timer and day date are included. One of the coolest features is a moon/tide graphic display on the upper corner of the face. 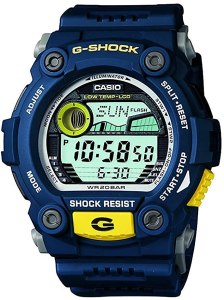 If you like the classic look of steel, but don’t want to compromise on the functionality a G-Shock offers, then consider this model, which boasts a stainless steel bezel and lugs with a resin strap. It has an analog display that’s inspired by classic watches, but the subdials are replaced with digital displays of the day, date and other information. Best of all, a solar battery keeps the watch running for longer. 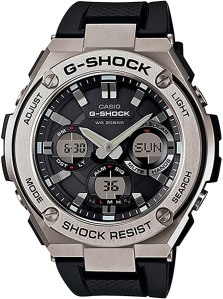 The face of this watch is packed with details, and the display combines analog dials with digital displays to get the best of both worlds. The main time display is analog, and there’s a manual sub-dial as well. On the lower half of the watch are displays for the day and date, and you can set multiple alarms, including a snooze alarm. 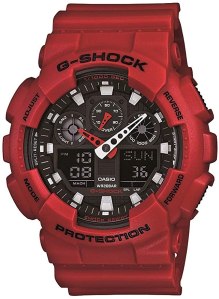 The octagonal bezel and analog display make this look like a much more expensive watch, while the black and gray colorway makes it look surprisingly sleek. Of the many cool features, one of the coolest is the day display. Instead of a digital display, the seven days are organized on a dial, and the hand points to the current day. This option is imported, so it’ll likely be more expensive than in some other places. 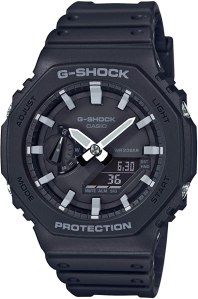 This watch is an absolute unit. Not only is this watch big, but it’s also big on features. You can connect it to your smartphone, allowing it to act as a step counter while enabling other features. Despite its smart connectivity, the watch has a completely analog face, including dates, tides and timers. You can set up to five alarms and take this watch in the water because it’s resistant to water and pressure at up to 200 meters. It also has a solar battery to keep it running longer. 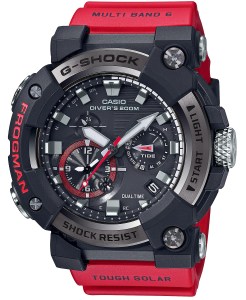 G-Shock’s Baby-G line is designed to be slightly smaller to be more comfortable on women’s wrists. That said, these watches are by no means small, and they eclipse many men’s watches in size. This watch has water resistance that makes it suitable for swimming and snorkeling (not scuba) and it has a stopwatch, countdown timer, world time and a backlight with afterglow. 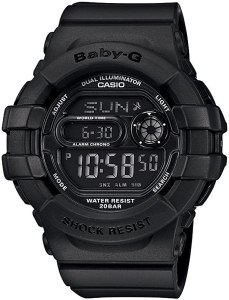 The Best Garmin Watches for Sale in 2020