Men’s combat boots have an interesting history. The most famous brand is, of course, Dr. Martens (colloquially known as “Doc Martens”). The hard leather lace-up boot with its famously comfortable soles were first popular with German housewives in the late 1940s, but you’ll find them inside every hipster’s closet in 2021. Dr. Martens are universally recognized as the best combat boots for men and women, but they aren’t your only option.

Today, Dr. Marten’s combat boots are a fashion staple and not simply a symbol of rebellion or rock n’ roll. Pharrell Williams even wore a pair when he received his honorary doctorate from NYU in 2017. Stylish men’s combat boots can be found in zillions of colors and fabrics, and it seems that almost every menswear designer has at least one or two men’s combat boots in their repertoire.

What the heck is a combat boot anyway? A combat boot (usually) sits on a thick rubber or crepe outsole. It is a lace-up shoe and the boot’s shaft ends a little over the ankle. Traditionally made from hard, durable leather or canvas, you can find them in suede, nylon, cotton and any combination of those fabrics. This durable military-style men’s boot is designed to provide excellent traction and ankle support.

How To Wear a Men’s Combat Boot

The easiest way to style men’s combat boots is to wear them with dark blue or black jeans. Since many combat boots’ uppers look like oxfords, brogues or lace-ups, you can sneak them into offices that accept more casual attire. While the iconic Dr. Martens combat boot comes in a dark color like black or burgundy, you can now find men’s combat boots in a wide variety of colors and prints.

Wear dressier combat boots with cleanly tailored twill or cotton-blend trousers. On the weekend, they easily go with jeans and a button-down shirt or graphic t-shirt.

This is the classic Doc Martens men’s combat boot. When someone says, “Doc Martens,” this is the boot they’re talking about. Named after its debut date (April 1, 1960), this lace-up style’s been worn by everyone from The Sex Pistols to your next-door neighbor. It has eight eyes, yellow topstitching, and the famous air-wave, air-cushioned sole. Shown here in “Cherry Red,” these classic boots also come in nine other shades. 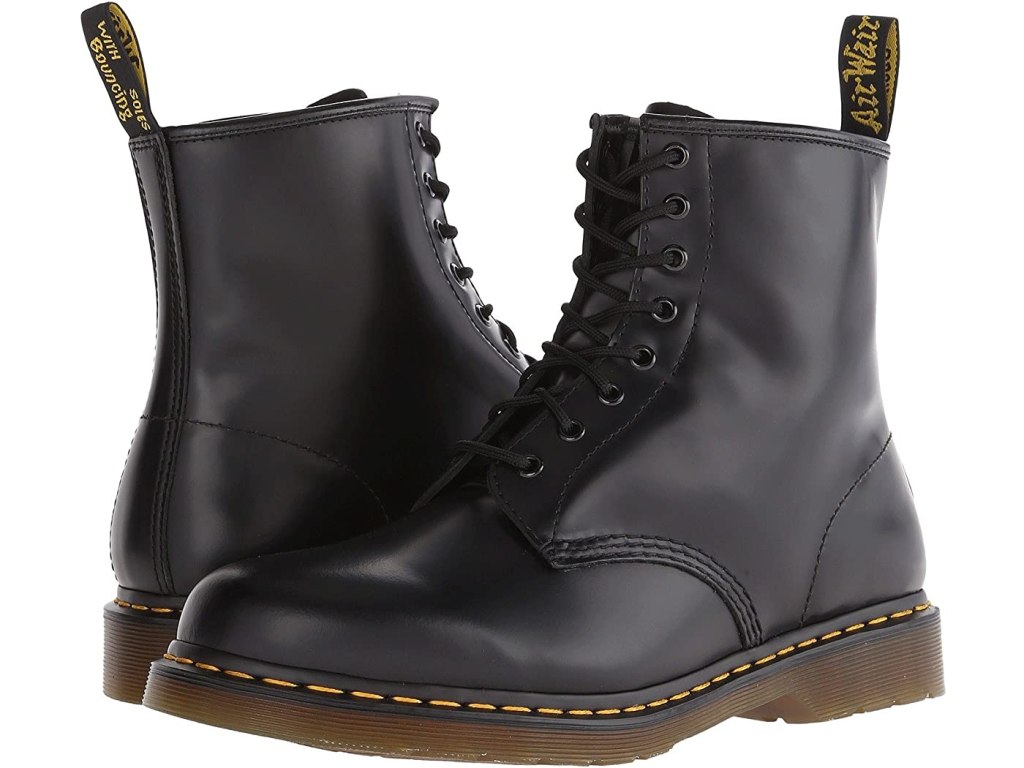 Italian brand Aquatalia creates fashionable footwear that’s waterproof or water-resistant. Fernando’s a futuristic-looking mix of combat and hiking boot. The outer is a combo of tech details and leather. The inner is lined in neoprene and has a leather padded insole. And, as we would expect from the best combat boots for men, they’re totally waterproof. 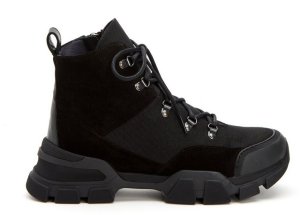 We here at SPY are huge fans of Thursday Boots, and we’ve featured them in round-ups in the past. One of the reasons why we’re so enamored with the brand, aside from the workmanship, fit and transparent sourcing/pricing, is that they literally have a style for every facet of your life. Take The Explorer, it’s a cool mashup of a hiking boot, a work boot and a combat boot. Easy to wear on or off the trails, it’s made from leather that’s made to last, and has storm-welt construction that’ll keep the boots on your feet for years. Did we mention that they’re lined in glove leather, and have shock-absorbing comfort insoles? They’ve got it all, and they’re handcrafted too. 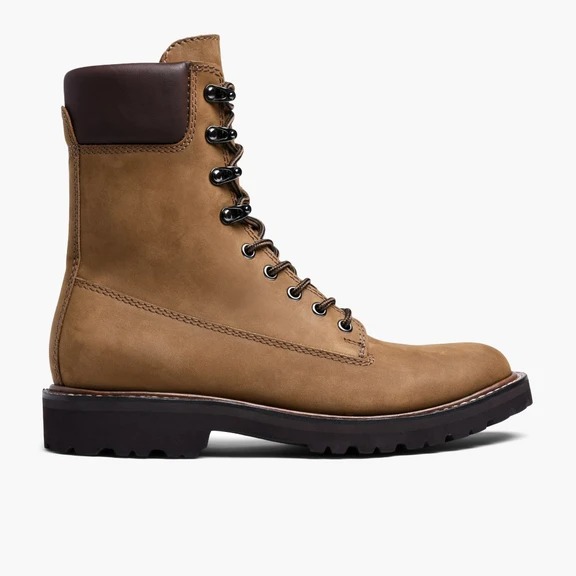 To many, Dr Martens or “Docs” are the alpha and omega of combat boots. We’ve discussed how they’re an iconic boot above, and their designs have been copied by many brands over the years. For summer, they’re lightening up their classic combat boot in tonal black suede and canvas. It has everything you expect from a pair of Docs, including a cushioned footbed and their classic airwave sole. 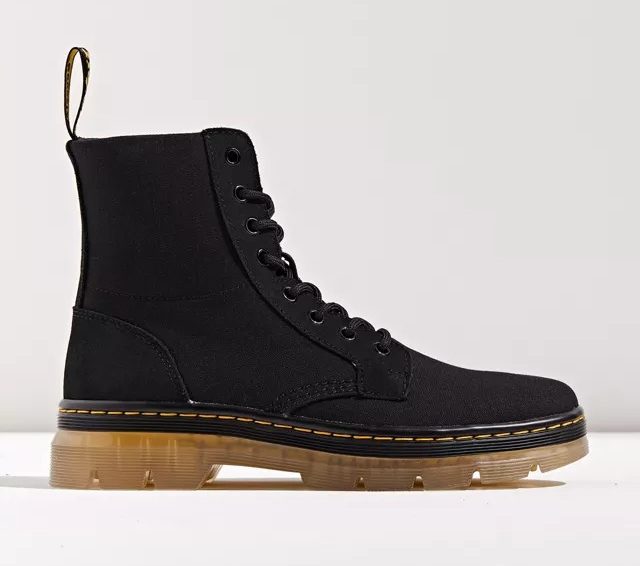 Instead of eight eyes, this men’s combat boot has six and sits a bit lower than Doc Martens’ classic 1460 style boot. The Felix is made with vegan leather for guys who want to enjoy the best men’s combat boots without animal products. These boots still have most of the brand’s hallmarks: yellow topstitching, the back loop and the brand’s air-cushioned sole. 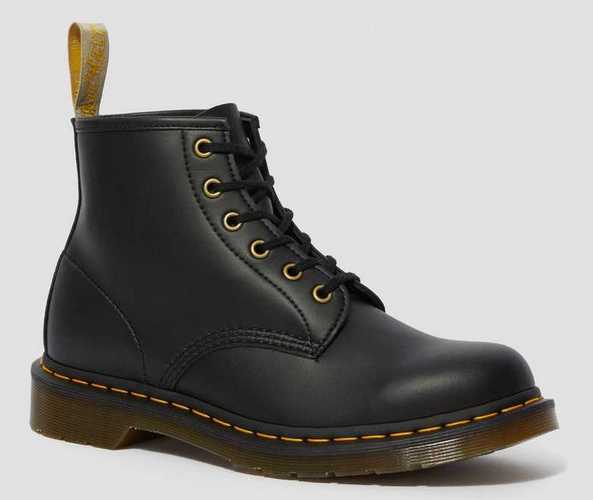 For those of us who like to switch off styles and matching footwear daily, Vostey’s combat boot fits in nicely in your boot repertoire and is also kind to your wallet. This combat boot has style for days and can easily go from weekends in jeans to chinos when you hit the office or have a need to feel a bit more dressed up when you walk over to your WFH desk. They have a padded collar, and you can either lace or zip them up. They rest on a flexible, rubber sole. They’ve been reviewed over 1,300 times in Amazon, and wearers rave about the fit, style and how they found a combat boot that not only looks good but can easily be worn for miles and miles of walking. 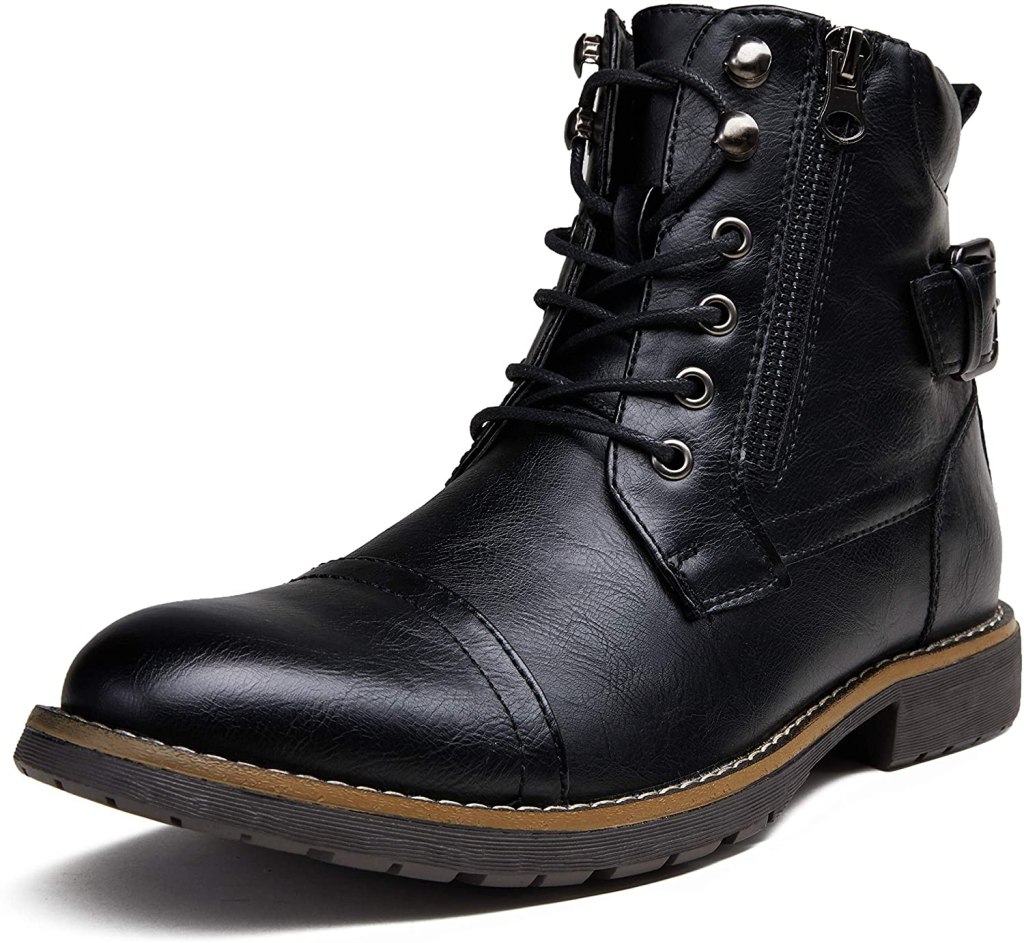 We’ve attempted to use footwear from Taft in the past, but unfortunately for us, their styles sell out too quickly. They’ve recently re-stocked their patterned The Saint combat boot, so if you want to snazz up your wardrobe, don’t hesitate, grab it now. This combat boot sports a refined camo print that’s framed by caramel leather. The leather-covered toe has wingtip details, while the leather on the heel is burnished to a deeper brown. The inside is lined in glove leather, and the leather outsole has rubber inserts to prevent slipping. 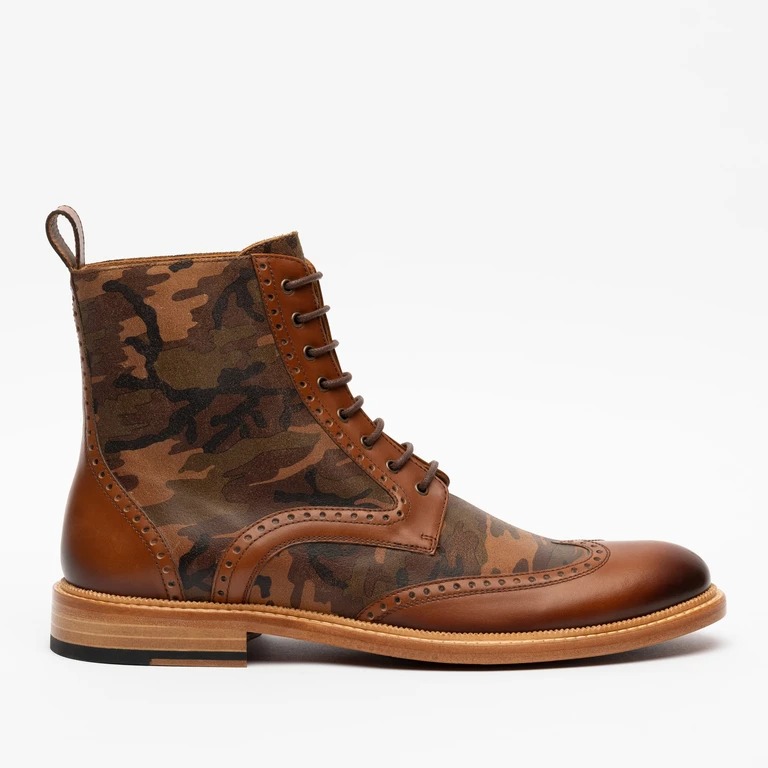 Alexander McQueen’s menswear is refined, comprised of clean lines with an air of slight subversiveness as if the designer is (quietly) deflating the preciousness of the luxury market. For spring and summer, many of McQueen’s pieces are showcasing fabric that has an ombre/bleached-out pattern. Their combat boots echo that menswear pattern. Made from bleached cotton, they sport a rubber toe cap and sides and sit on a chunky treaded sole. 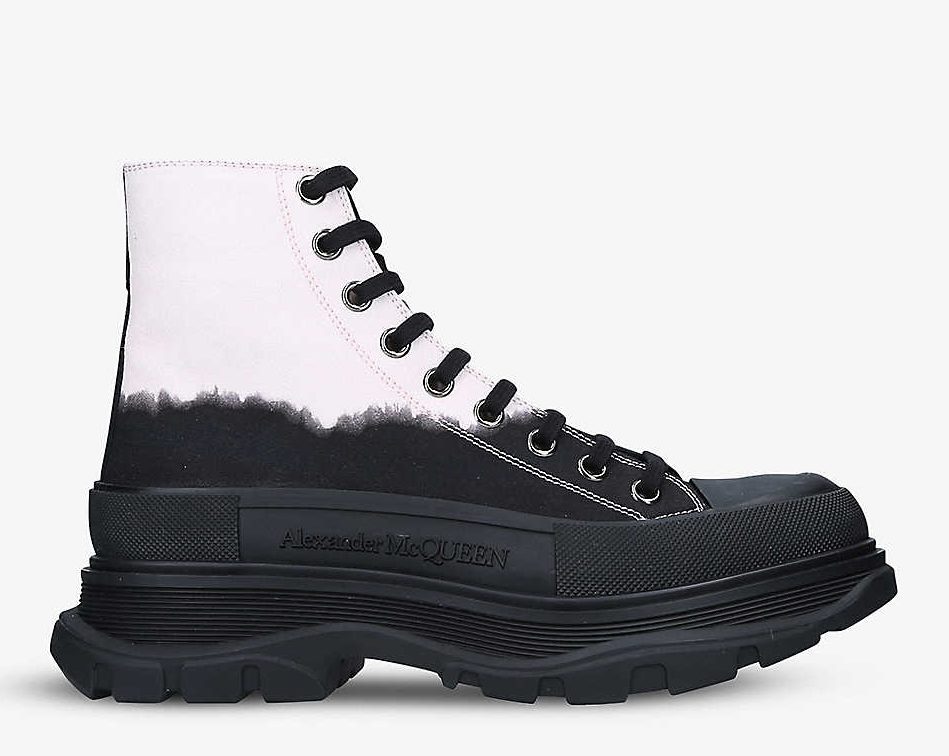 BEST FOR THE OFFICE

If you want to show off your fashion bona fides, then you need a pair of wingtip boots in your boot rotation. So up your style game with these office-friendly lace-up boots from Skechers. Part of the Skechers Mark Nason collab, this combat boot’s profile is embellished with a suede body that’s accented with punctured leather wingtip trim. It sits on a flexible lug sole and has a cushioned comfort footbed. 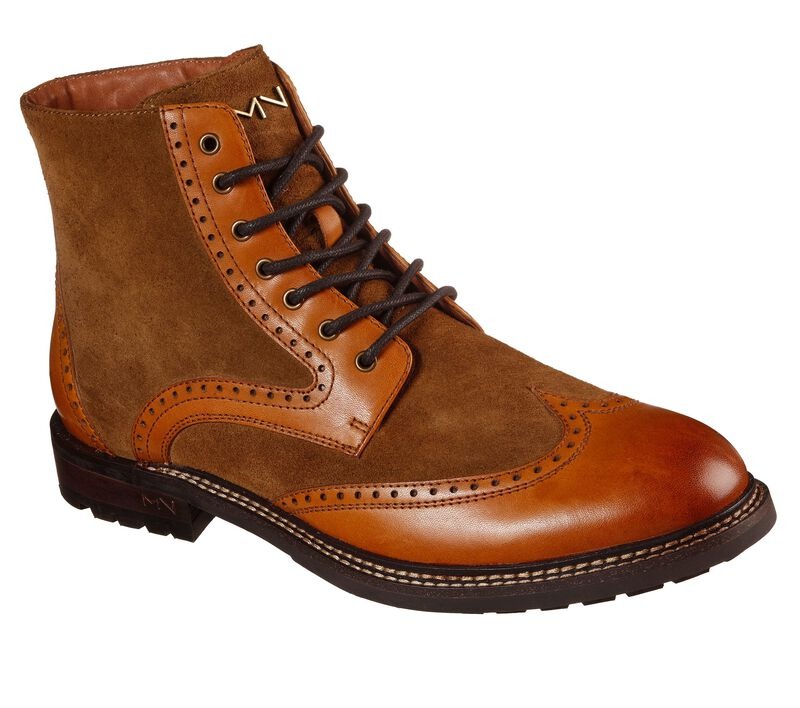 Techwear is a new trend, it combines activewear, streetwear with a Goth and sci-fi bent. We wrote up a quick primer on what it is, and how to wear it. Nike, known for their incomparable sneakers, has released a few tech combat boots and the SFB Field is the most badass-looking one of the group. This is a waterproof performance boot that’s made of leather and GORE-TEX. It’s built for heavy-duty hiking and clambering around rocky areas due to the way the sole has been engineered. This performance combat boot has a variety of patterns on the outer sole that ensures everything from improving stability while climbing to a sawtooth pattern around the arch that gives extra grip when rope climbing. If Parkour is your middle name, if you adventure around the world, and have never met an off-road obstacle you didn’t like, this is your combat boot. 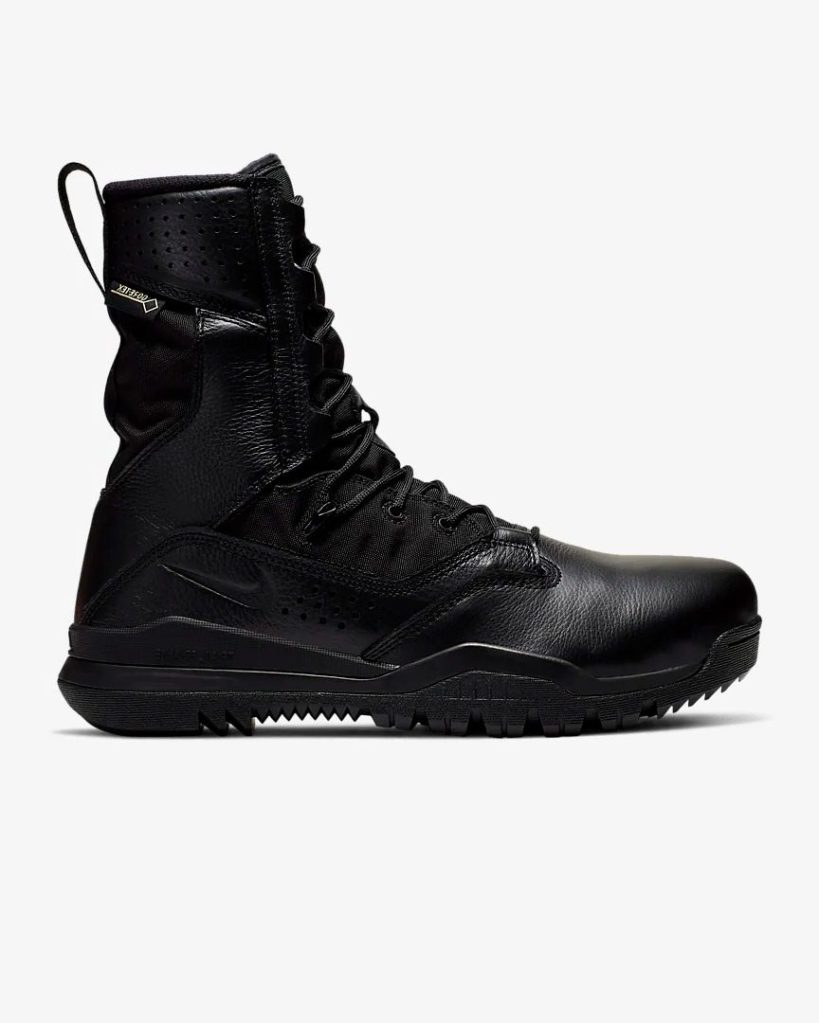 BEST EASY ON & OFF

Do you like the idea of combat boots but hate the thought of doing up all those laces? Trust Dr. Martens to come up with a stylish solution. Starting with their classic 1460 boot, this eight-eye lace-up has a new twist. They’ve taken out the laces and added elastic across the tongue, making it easier to get in and wiggle out. There’s also a side zipper if you want to get them off quickly. These Docs come with the brand’s classic fabric loop at the back and sit on their airwave soles. 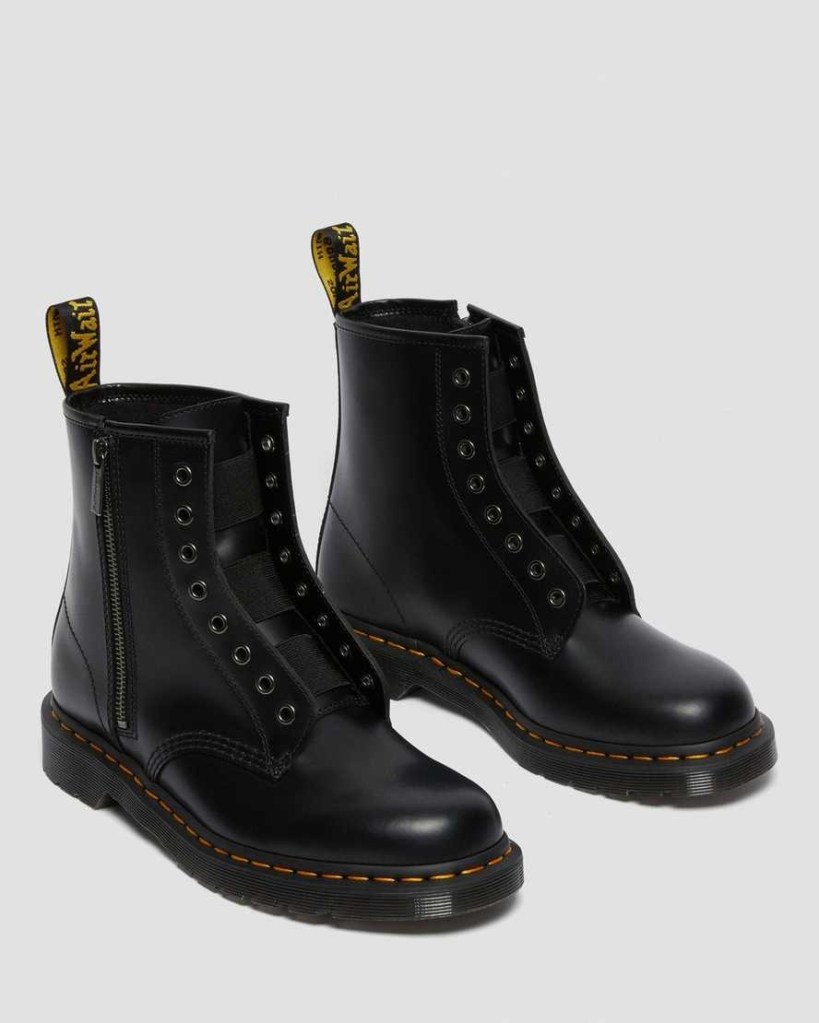 BEST FOR ANY WEATHER

This men’s combat boot is office-friendly and can be either laced-up or zipped. The vintage-style leather upper sits on a thermal rubber outsole that’s non-skid and slip-resistant. Canadian brand Pajar made its reputation creating footwear that can be worn during arctic blasts, and this combat boot is cold rated to -13 degrees. 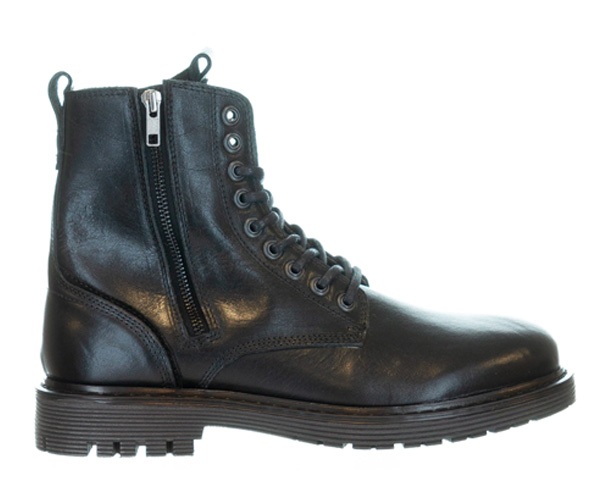 About two or three years ago, white boots exploded into the footwear scene. First primarily worn by women, men and kiddos started following suit. What was thought to be a quick fad, has turned into a long-term trend.  A friend informed me that Doc Martens’s white combat boots keep selling out in their NYC stores. Much like white sneakers, white boots need that extra bit of care to keep them gleaming. The 101 is a shortened version of the brand’s iconic boot and has six eyes instead of eight. Made with smooth leather, these lace-up combat boots have a cushioned insole and sits on the brands’ famous airwave outsole. And yes, they also come in black. 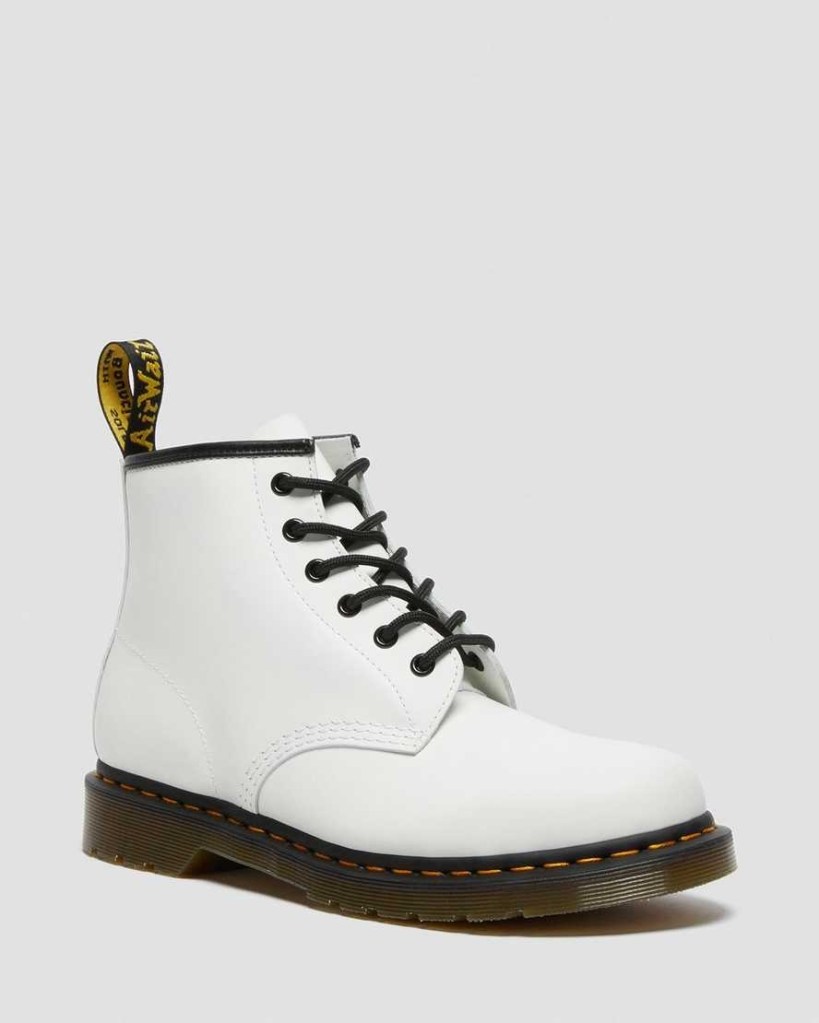 Based in Mallorca, Camper has a reputation for making footwear with personality and style. Jumping into the white combat boot trend, they created Brutus. It’s a little bit combat and a touch of high-top sneaker. Made from leather in a certified Leather Working Group tannery, these boots have been crafted with the environment’s care in mind. Sitting on a PEVA outsole, these white leather boots lace-up, but also have a side zipper. They have a round toe and are lined in leather. Try them with light or beige denim or chinos. 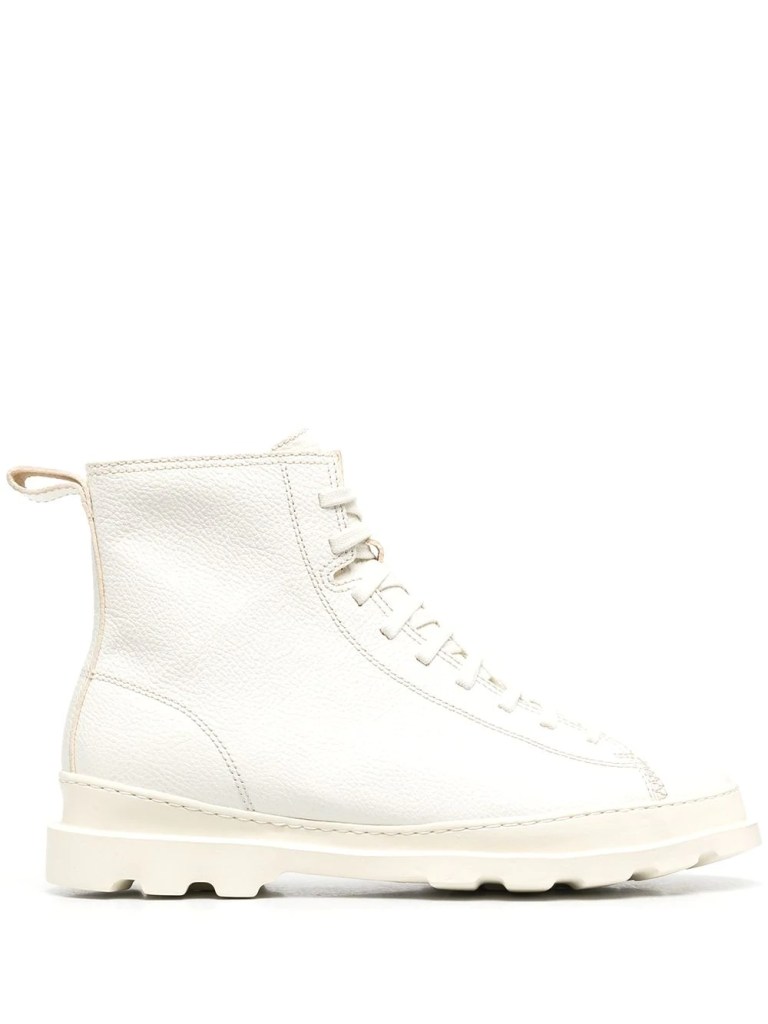