You know the feeling — you’re going about your day peacefully in your home when all of a sudden you catch a glimpse of something horrifying on the wall. It’s not a random black smudge or a floater in your eye, as you’re hoping it is, it’s a spider. It’s moving quickly and you’ve got to act fast. Sure you could smack it with your sandal and have spider guts smeared everywhere — not super pleasant. You could also try to catch it under a cup and place it outside but that introduces all sorts of possibilities of it escaping or worse, touching your skin. Save yourself the grief and use a spider catcher instead.

Spider catchers range in shape and approach from wands with canisters at the bottom to catchers similar in form to roach and rodent traps. Whatever you choose, we know you want it to be effective in disposing of these unwelcome houseguests, so we’ve gathered the best spider catchers available on Amazon. Arm yourself with the best protection available with one of the choices below.

My Critter Catcher has created a high-quality spider catcher for you to use against even the most intimidating insects. Solve the universal problem of wanting the spider gone without actually having to get too close to it with this 26″ long wand. It has soft bristles that close around the spider, keeping it from escaping, so you can catch and release it wherever you want it to go. It’s a quick, clean and non-lethal way of getting rid of spiders, roaches, centipedes and other critters.

Pros: Keeps you at a safe distance, soft bristles trap without killing, enables you to release it wherever you’d like it to go.

Cons: Smaller or faster spiders may be able to wiggle out quickly. 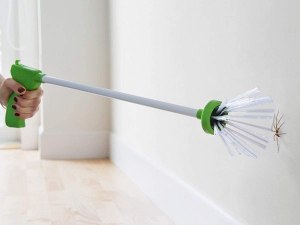 Courtesy of Amazon
Buy: My Critter Catcher — Spider and Insect… $21.95
buy it

This spider trap from Terro traps and kills all the insects you don’t want in your home including spiders, cockroaches, crickets and more. It’s designed to kill the “big 3” when it comes to spider species including the brown recluse, black widow and hobo spider. The strips are non-toxic and sticky on the inside so you can use them flat or folded. It’s best to fold up the sides if you’ve got children or pets in the house to keep them from touching the surface. Place them against baseboards, behind doors or in dark corners and let them work their magic without you needing to do any work.

Pros: Non-toxic sticky pads trap and kill insects, passive for you, can be used flat or folded.

These easy-to-use insect traps are simple to set up and work quickly to trap and kill the poisonous spiders you don’t want in your home including Brown Recluse, Black Widow and Hobo Spiders. These strips are non-toxic and pesticide-free so there’s no concern with using them with children and pets around. They’re clearly labeled on the outside so everyone will know not to move them once placed around your home, and can trap and kill spiders, ants, crickets, roaches and other insects you probably don’t want hanging around.

Pros: Simple to set up, non-toxic and pesticide-free, kills poisonous spiders and beyond.

Cons: Requires disposal of the trap and insects after use. 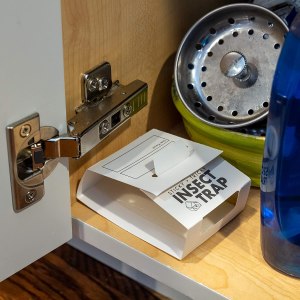 The Rescue! spider traps require no assembly or work on your end to set up and begin catching. They’re designed to catch a wide variety of biting and poisonous spiders including black widow spiders, brown recluse spiders and hobo spiders. This trap includes multiple different entrances and hundreds of glue dots inside enabling the trap to catch more spiders simultaneously. It’s more discrete and aesthetically designed than typical insect catcher strips and will bend in with existing decor. It also has two sides of glue so you can simply flip it over and double the life of the trapper.

Cons: You’ll have to look inside of it in order to know if it’s caught a spider or not. 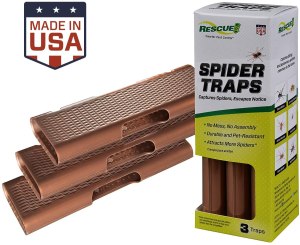 These glue traps from J T Eaton are designed to discretely attract all types of crawling and slithering pests in your home, enabling you to dispose of them properly. They’re pre-baited with attractive scent for pests so they’ll be drawn to the glue and get stuck. They’re also nonpoisonous traps so you won’t have dead critters to get rid of. The adhesive on the glue strips works in all temperatures and is designed to be non-drying and non-flowing as well.

Pros: Scented and baited to attract critters, nonpoisonous, works in all temperatures. 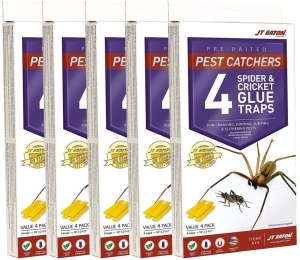