To the average person, a tennis ball is just a tennis ball. They are round, yellow and covered in felt, simple as that. But to someone who plays tennis on a regular basis, there’s a lot more to it. You don’t have to be Novak Djokovic to tell the difference between a normal tennis ball and one which is unusually heavy, excessively furry or unerringly dense. The right tennis gear can make a big difference during practice and competitive play, which is why it’s important for anyone who takes their tennis playing even a little bit seriously to search out the best tennis balls.

While there is certainly an argument that says you can play tennis with any tennis ball, no matter how little it bounces or how soft it plays, playing tennis, especially at a competitive level, is far more comfortable with a high-quality tennis ball. If you’re not sure what balls constitute a “good” tennis ball, it’s worth checking out this International Tennis Federation (ITF) guide.

Away from playing tennis, the best tennis balls are a versatile item for enjoying a number of other fun games, too. And not just with people, either. We’re sure your four-legged friend (we mean dog and not cat) is ready and raring to go whenever there’s a tennis ball being thrown around. Fun games you can play with a tennis ball include:

Below you’ll find our top 11 picks for the best tennis balls. We’ve included options for all levels of tennis players, from beginner to professional. We’ve also included a number of unique and novelty tennis balls which are great for dogs, different ball games and for gifting to tennis-loving friends. Read on to find the right ball for your needs.

For hard court players, these Penn Championship Tennis Balls make your decision simple. In addition to being America’s number one selling tennis ball, these are tried-and-tested and well-reviewed tennis balls that have been specially designed for hard court tennis action. Each order includes two three-ball cans, giving you six felt, pressurized balls to play with. Additionally, these balls sport interlocked, woolen fibers for greater durability along with deep elastic seams which help to prevent cracking. 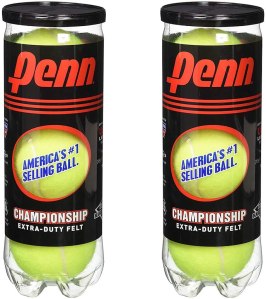 Practicing with high-quality balls can be as important as competing with high-quality balls, which is why these Penn Practice Tennis Balls should be in your gear bag. Each pack contains three pressurized, felt tennis balls which are great for all kinds of practice and non-competitive play, including beginner lessons and pro-level training. In addition, they’ve received positive reviews from over 90% of Amazon users who already trust their quality and performance. 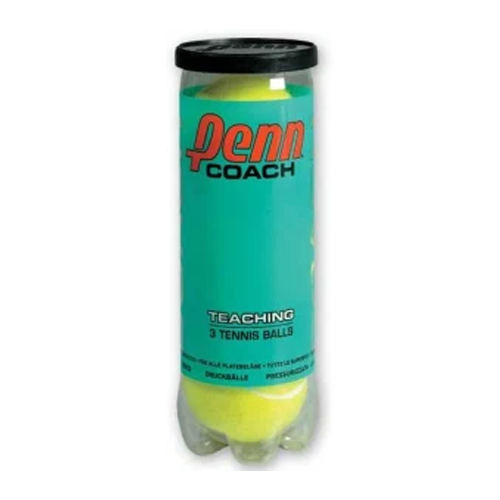 While optic yellow is undoubtedly the most popular tennis ball color, it is handy to have an alternative if there are any yellow-colored distractions around. In these Penn Pink Championship Extra Duty Tennis Balls, you’ll have a bright pink alternative to the traditional yellow which is equally as easy to see and performs at the same level. They come backed by over 2,000 five-star ratings and can also be ordered in a range of different can amounts, all the way up to 24 cans (a total of 72 balls). Furthermore, as a bonus, Penn donates $0.15 from every pink-ball can sold to breast cancer research. 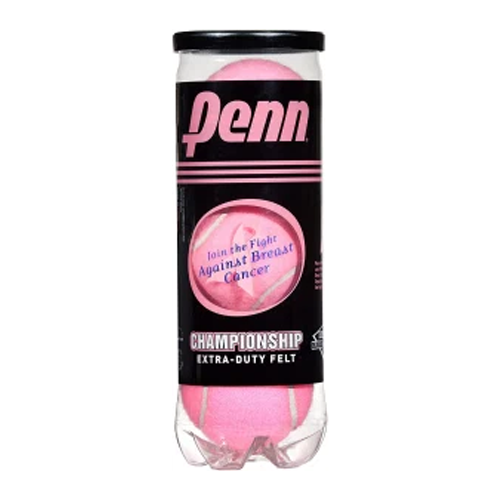 As the official ball supplier of the US Open and Australian Open Grand Slam Championships, you already know these Wilson US Open Tennis Balls are up to the standard the pros require. They’re a great option for tournament players who are looking for high-quality performance from their balls, no matter whether they’re competing or practicing. Additionally, the balls’ regular duty style is ideal for longer play on both indoor and clay courts. Plus, each of these ITF and USTA-approved balls is branded with Wilson’s name alongside a US Open logo. 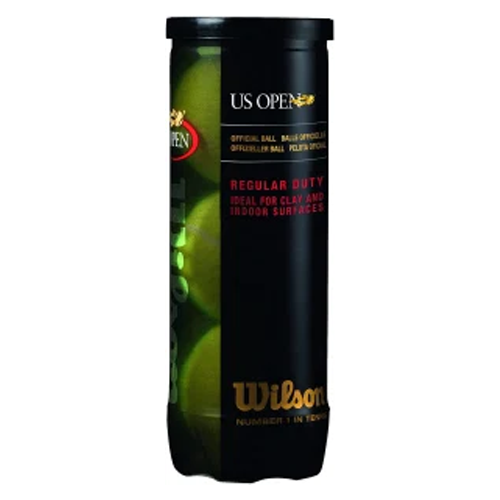 While not designed for actual court play, this ChalkTalkSPORTS Personalized Printed Tennis Ball is a great gift idea for tennis fans, players, coaches and even your dog. It’s a unique way to say thanks or for celebrating an achievement as it makes an eye-catching display piece in your home or office. Simply write down the name, date or message you’d like printed on the ball and in no time, you’ll have a standout gift in your hands, which is also printed in the USA. 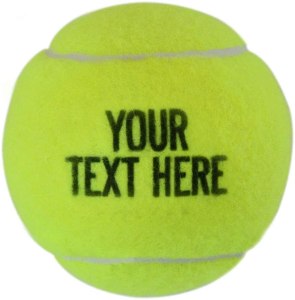 At 9.5 inches across, the Banfeng Giant Dog Tennis Ball isn’t made for hitting with a racket. However, dogs and players with impressive foot control will love spending hours knocking this ball around. For dogs, chasing a ball this size may be something like a dream. For players, a game of short tennis played with your feet is a great way to improve control and introduce additional elements into your game. The rubber and non-abrasive felt ball is not inflated upon arrival but does come supplied with an inflating needle. 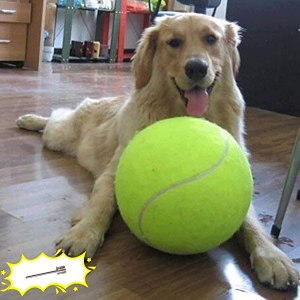 If you regularly switch between hard and soft court surfaces, you’re going to want a ball that is capable of dealing with that change. Put simply, you’re going to want these Wilson Prime All Court Tennis Balls. They are available in a range of different pack sizes, up to a maximum 72-ball pack which is ideal for clubs and serious players. The balls also feature exclusive Duraweave felt which gives them their durable construction and multi-court capabilities. 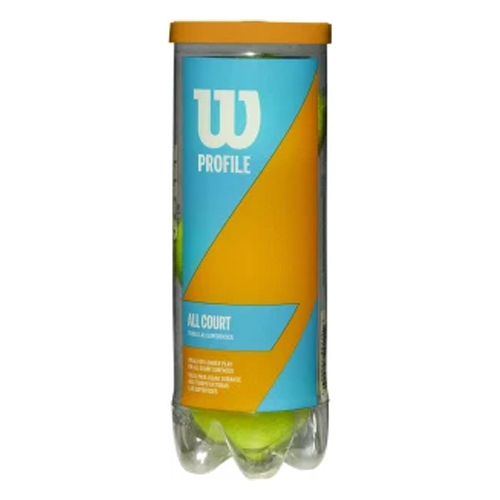 By offering ball speeds that are 25 to 50 percent slower than your average tennis balls, these Gamma Quick Kids (Transition) Practice Tennis Balls are ideal for newcomers to the game and those looking to progress to a higher level. You can choose between two ball speeds, each of which is two-tone colored to make it more easily identified next to your average tennis ball. In addition to being a great way to introduce a new player to the game, these balls are ideal for young or inexperienced players looking to transition from a 36-feet court to a 60-feet one. 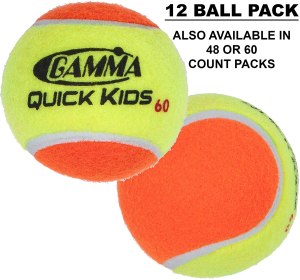 It’s not only humans who love games involving tennis balls, our four-legged, furry friends enjoy them just as much. With these Hyper Pet Tennis Balls at your disposal, you’ll have everything your dog needs for a good time. In addition to all-out fun, these balls can be used for training your dog, too. They’re available in your choice of orange, pink or green, each of which is brightly colored to make them easier to locate. The balls are also nontoxic and nonabrasive so you can be at ease when your dog has them in its mouth. In addition, the Hyper Pet K9 Kannon K2 Ball Launcher and Hyper Pet Throw-N-Go Dog Ball Launcher make great accompaniments to really give your dog the workout it desires. 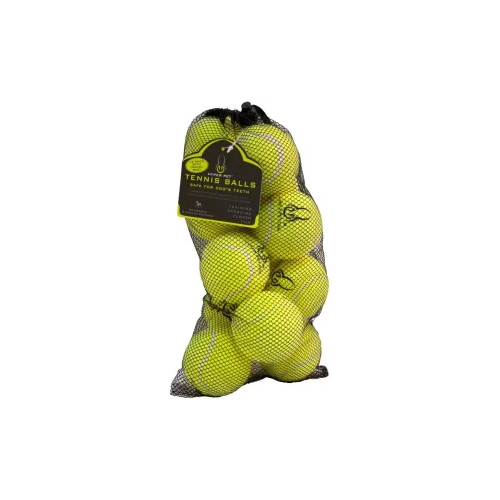 Because of their pressureless design, these Gamma Bag of Pressureless Tennis Balls offers greater-than-average durability when compared to a standard tennis ball. The balls are also impressively versatile, being handy for practice, lessons, non-competitive play and for use in ball machines, too. They are also available in four different colors and in two different bag sizes. Furthermore, the accompanying drawstring bag makes storing and transporting your balls easier and more convenient. 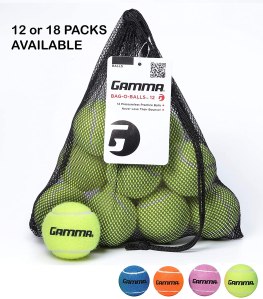 If you’re in need of a vast supply of tennis balls, it’s worth considering these Penn Championship Tennis Balls. For just under $100, you’ll receive 72 high-quality balls, packaged in 24 three-ball cans for on-the-court and at-home storage convenience. They’re a great investment for clubs, enthusiasts and anyone who regularly plays tennis. As well as being the number one selling ball across America, they are also USTA and ITF approved and regular duty, meaning they’re suitable for soft clay courts and indoor or outdoor hard courts. 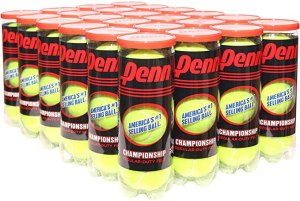