A lot of watch collectors have a personal connection to their favorite watches. That connection could be based on who they got it from or where they’ve worn it. When you have such a personal attachment to an item, it’s easy to forget that the majority of watches are mass-produced objects. Even Rolex, for example, produces over 800,000 watches per year, according to Forbes. But what if a watch could be personal from the start?

That’s the gap Weiss is attempting to fill. Weiss is the eponymous brand of Cameron Weiss, a Los Angeles native now living in Nashville who manufactures watches by hand.

Weiss the company has only been selling watches for a decade, so it’s a newborn baby by watch brand standards but an elder by startup standards. When the brand started, Weiss the man was making watches for men out of his apartment, and he’s managed to stay true to the DIY ethos that got him started.

“I founded the business with my wife, Whitney, and we’re still here plugging away together to build this dream of ours. We now have two daughters, two German Shepherds, and a lot more machines,” Weiss said in a recent interview with SPY. Though his resources have grown with his company, Weiss still makes the watches by hand himself, and the brand essentially consists of him and Whitney. 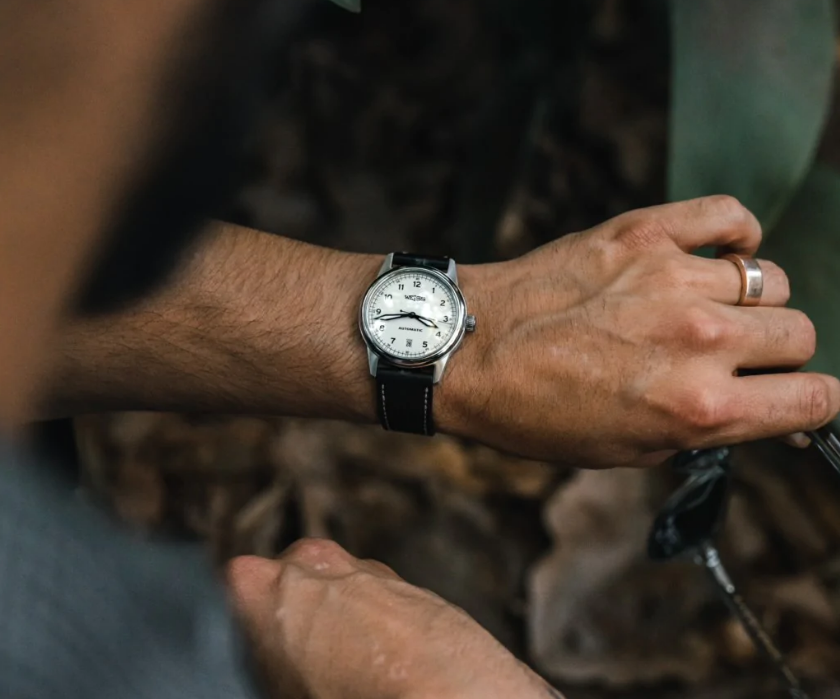 A crucial part of Weiss’ mission, both for the founder and his namesake brand, is to “restore prestige to American watchmaking,” and Cameron cites Waltham Watch Company as an inspiration. The company, founded in Massachusets in 1850, innovated in developing mass production techniques and bringing them to watchmaking, allowing for interchangeable parts to be used and bringing down costs.

It’s perhaps surprising that Weiss, a shop that hand makes each timepiece, would be inspired by Waltham, the company that made mass production possible. Waltham’s inspiration might make sense given Weiss’ distinctly American watch styles. Most of the brand’s offerings are field watches, which, while not explicitly American, have a rugged, American feeling.

Beyond the stylish design and quality components, the draw of the Weiss brand is the story. As Weiss explained, “I was interested in watches and engineering at an early age, but I did not realize I could turn it into my career until college. I met a watchmaker, and it dawned on me that this could be the path for me.” Weiss found a program and apprenticed for two years, then trained at legendary Swiss watchmakers Audemars Piguet and Vacheron Constantin. 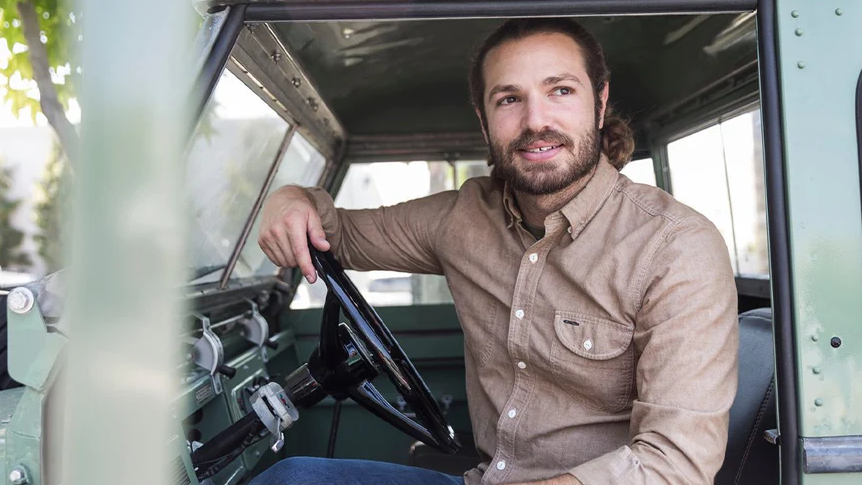 What’s impressive is that, while most brands expand outward as they grow, Cameron Weiss is attempting to expand inward. As he explained “As each year has gone by, we have been able to bring more production under our roof. We just began machining cases in the workshop for all of our timepieces. Next, we will begin making more of the larger turned parts such as mainspring barrels and balance wheels. With the new space and new machines, I will be able to bring all of our metal parts in-house, including the larger parts that we had subcontracted to machine shops around the USA.”

For the average shopper who might take 2-day shipping for granted, buying a Weiss watch might be a new experience. In addition to straps and accessories, there are a total of six watches on the site, with four face colors to choose from for the standard-issue watches. The timepieces ship in a month or up to three months, and the lead time depends on the order queue. And to add to Weiss’ growing confidence, the brand now offers a lifetime warranty. 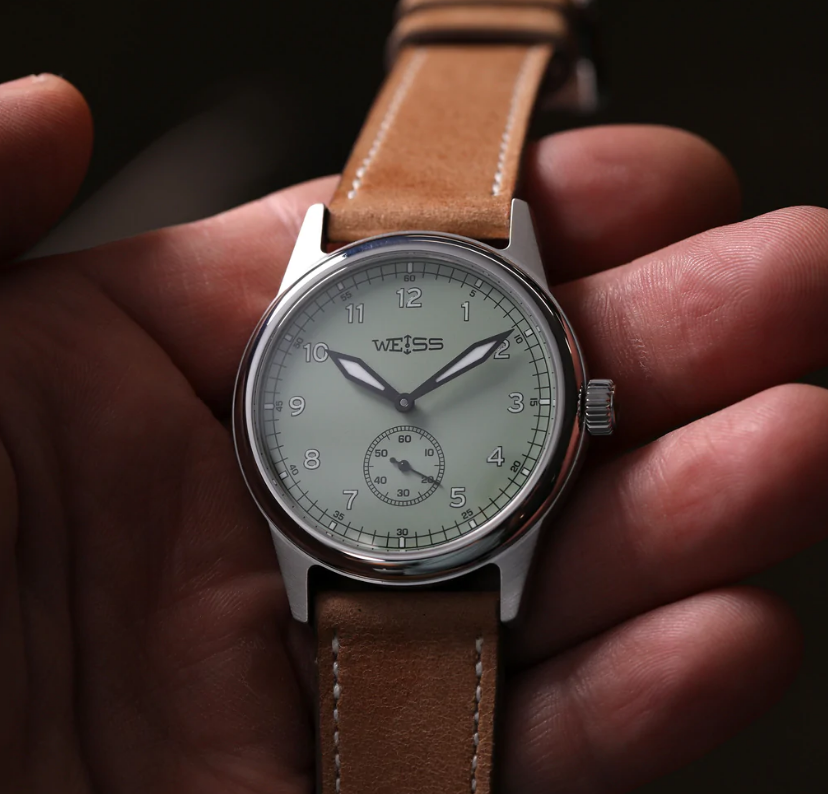 But despite the fact that Weiss is essentially going it alone, the brand has picked up some collaborators along the way.

“It can be really fun to work with another brand we love; we are able to get creative together and try new, fun models that vary from our more traditional designs,” Weiss said. “I loved creating the Birdie arm-as-watch-hands design for Birdwell as a nod to the classic Mickey Mouse character watches, and I really had fun making the Tanner Goods collaboration with their team.”

The Birdwell Beach Britches watches, released in 2018, are arguably the farthest the brand deviated from the classic field watch design. The character watches were limited to ten pieces with a white face and ten with red, and featured Birdwell’s logo and a wave sub-seconds dial. The Southern California beach inspiration is unmistakable, and Birdwell is a brand that’s been hand-making surfwear in the US for half a century. It’s no accident, of course.

Weiss explains, “I was born in Southern California, so I began my life outdoors- at one with the ocean, sand, and salty air. I think your birthplace shapes you forever. I like Southern Californian design and architecture. It largely is timeless, natural, effortless, and I think you feel that in the designs I have created for our watches, too.”

Weiss is coming up on its tenth anniversary next year, and its founder is reticent about offering specifics, but it’s clear that big things are in the works. “I am planning a special release next year — and highly recommend signing up for our email list as that is where we announce our new releases. I can’t say much more than that, just yet.” 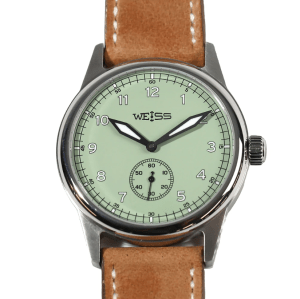 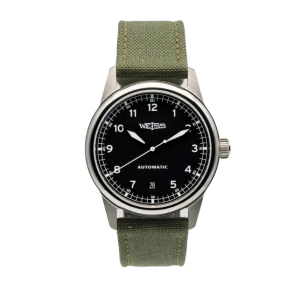 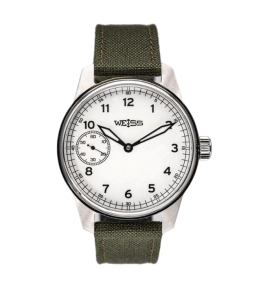 Retro Digital Watches for Men Are Having a Moment in 2022