Dangle earrings for men have been on my personal radar for quite some time now. Ever since the beginning of 2019 when celebs and models began rocking the solo-dolo dangle look on red carpets and runways, I kind of became obsessed with the look.

At the time, I was sporting one white-tunnel stretched ear that I began gauging behind my parents back when I was 14 years old. But, something about the single dangle earring look for men was calling my name. With that, I ditched the gauge I kept for a whopping eight years and chose to put stock in the single dangle earring look, hoping the trend would stay alive for a little longer.

As the months flew by, I wasn’t sure whether or not this trend would land itself in the world of mainstream men’s fashion or prove to be a one-off fad. You know, the kind of trend that lasts no longer than a couple of weeks as a sort of fashion one-hit-wonder. I figured it would die out sooner than later, like how Silly Bandz did in middle school. To my surprise, it’s been well over a year now and the trend hasn’t died in the slightest. Quite honestly, it’s done the opposite.

Dangle earrings have found their way from celebs and models to men in the office and boys next door. I mean, just go on TikTok and check out some eboys. The past year has only given the dangle earring look for men a grander platform. Now, this look has moved past the world of glamorous high-fashion and into the less-glamorous world of real life. That being said, the dangle look seems that it’s here to stay. 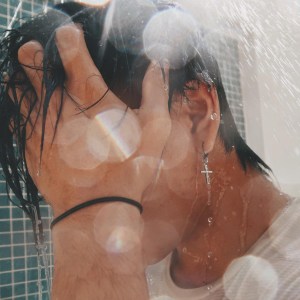 I’ve gone through a couple of dangle earrings myself over the past year, starting off with a flat gold square, moving on to a leaf, then a little gold bicycle and now a gold charm featuring a woman playing golf. You can say I’ve become a bit invested in the trend. Especially in gold dangle earrings. Well, fake gold. (Your boy can only dream.) But during my earring escapades I’ve come to wonder, where the hell did this trend start and why are fashion-forward eboys and men like myself so heavily entranced by it?

Go on a journey with me as we trace the beginnings of this trend in pastoral England to his present TikTok-fueled heyday. I’ll also share the coolest dangle earrings for men of all stripes.

The Surprising History of Dangle Earrings for Men

Much to our surprise, the trend didn’t just appear in 2019. There’s evidence of men rocking the single dangly look as far back as the late 1500s in England. William Harrison’s 1557 writing titled Description of England specifically mentions the popularity amongst men wearing large, dangling earrings made from “gold, stones, or pearls” all over the country. That may seem odd, but gentlemen of the time were known to rock lace the lace and tights look.

Sir Walter Raleigh, Elizabethian bodyguard and main protector to Elizabeth I, is also pictured wearing a double-peal dangle look to show his devotion to the queen in the late 16th century. This trend’s lived and died at least once before, so we aren’t the first generation to dip our toes in it. 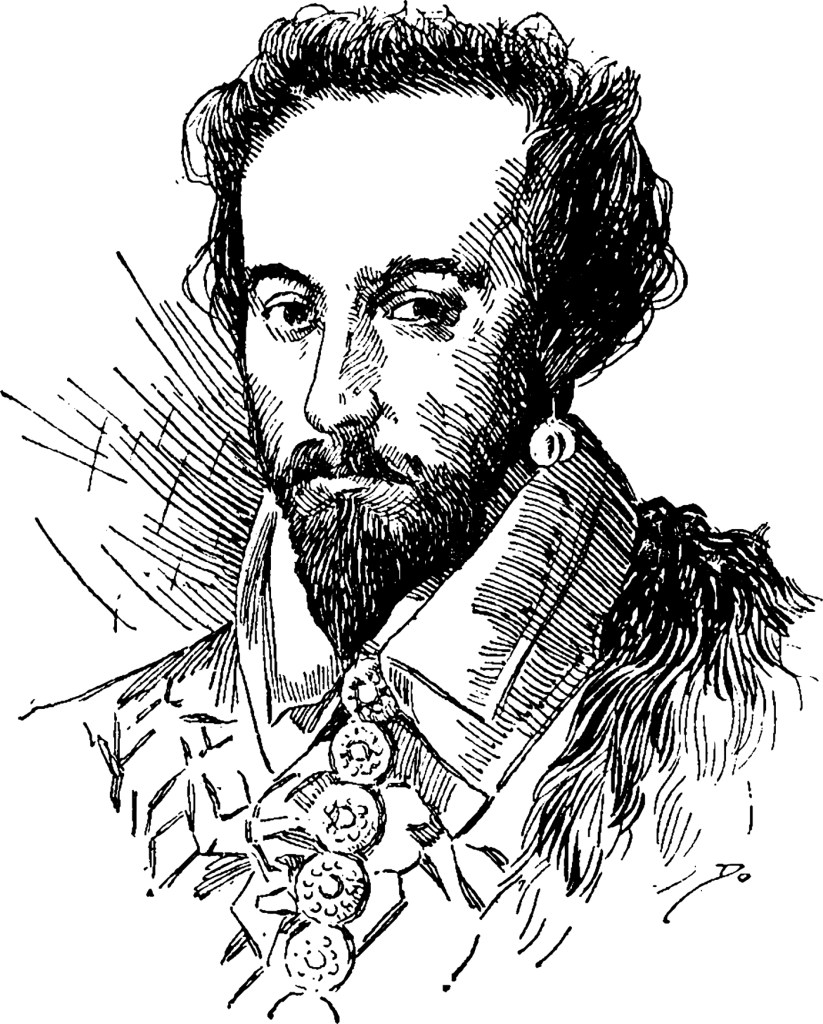 As life persisted, the trend that existed in the late English 1500s essentially did not. We didn’t see much of any ear jewelry on men again until the 1980s when pop culture began to take over the world more than it ever had and style was switching to the more playful, eccentric side for men and women alike. As punk, goth, skater and most importantly LGBTQ scenes were developed and celebrated in the public more freely around this time too, men piercing their ears became sort of an “F you” to social stigmas and clothing taboos.

Today, the dangle earring for men is still breaking outdated gender norms. It’s part of a larger push for a more non-binary way of dressing and expressing oneself. I think that’s what has made me so excited about wearing a dangle earring to begin with. It was something so minuscule, yet I’ve never given myself the chance to openly play with this style. Now, men have an array of options they never did before when deciding what to wear on their ears, and nobody looks twice. In just a few years, men went from having the choice between studs and gauges to pearls, frills, chainlinks, safety pins and little women playing golf.

The Best Dangle Earrings for Men

You shouldn’t fear toying around with your gender expression, especially given the fact that the dangle earring look for men has evolved into such a commonality amongst fashion-forward dudes. It’s an exciting, new way to step up your look that doesn’t need so much effort or attention. It’s an earring. It ain’t that serious.

If you’re ready to step up your jewelry game and give the dangle earring look for men a try, here are a couple of options to get you started.

Whether you’re just starting off or looking to add some more options to your collection, this 20 piece dangle earring set for men is an excellent option for guys looking to test out different styles on his ear. Silver is a pretty non-gaudy way to decide whether you like your earrings on the shorter or longer side and excellently pair with most outfits and other jewelry you might already be wearing. This set includes the classically popular cross and leaf options, as well as solo and elongated hoops. 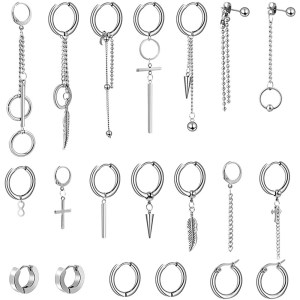 If you’re interested in the lower-key path when it comes to dangly earrings for men, these spike earrings are a great way to feed into the look without going overboard. They do offer a little more character than some of the options listed in the 20 pack above, especially considering the fact they are a little bit bigger, but they’re still on the “fit in” side of style. They’re available in 3 different colors and will look great paired with most outfits. At just $4, they’re also a totally inexpensive treat to throw on your ears. 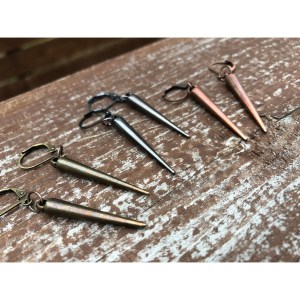 Explore your wild side a little and rock these Urban Outfitters exclusive “Rock On” dangle earrings in gold. Unlike the options listed prior, these go out of the norma a little bit more, but still stay true to natural earring metal colors by giving us a full-gold look. While gold might be a little more eccentric than silver, this is still an effortlessly cool way to push your accessorization standards. 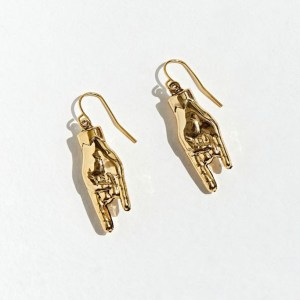 Push your look even more with one of these spiritually-inspired, vintage-looking dangle earrings from Etsy. Choose between a blessing hand, skull, hamas, triangle, sun, crescent moon with star, solo crescent or dream catcher-inspired options and really pull your look in a direction no one’s expecting. 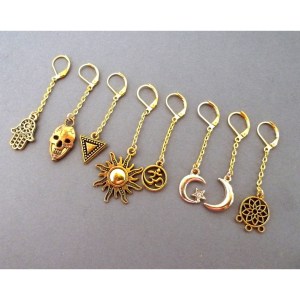 Don’t be afraid to add a little bit of color to your dangle earring look. Although these danglies are classified as a women’s accessory on Nordstrom’s website, I have one thing to say and one thing to say only, just make sure you’re listening: there is no such thing as a one-gendered dangly earring in 2020. Let me repeat, you can absolutely wear a dangly earring listen as women’s online. Why? Because, why not? Look how good-looking these are! 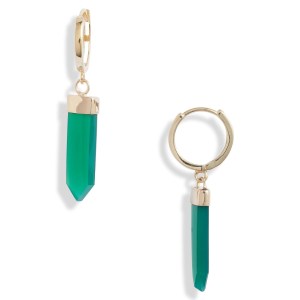 Mister is a smaller brand that makes some great jewelry for men, including some of our favorite men’s bracelets. And if your favorite emoji is the prayer hands symbol, then you’ll love these gold dangle earrings. 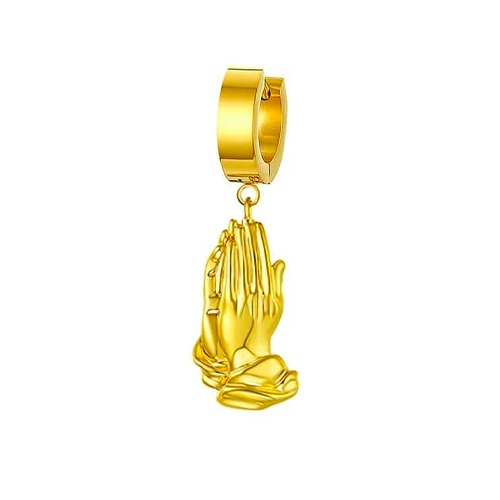 Okay, one more option from Mister, this time a classic in the single dangle earring world — the hanging feather look. If you want something a little more original, go with the brand’s gold-and-silver-toned dagger earring instead, but if this is your first piercing like this, the feather is a great choice. It’s a traditionally feminine symbol reappropriated for men’s style. 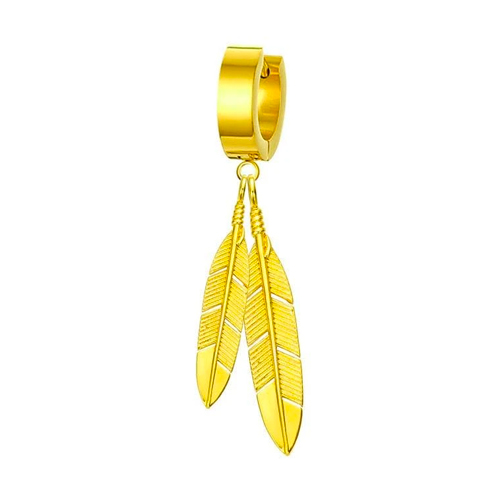