The Verdict: If you’re looking for a slim, new wallet that makes accessing cards a breeze, you can end your search here. Ekster’s Parliament delivers.

The hunt for the perfect wallet seems to be a never-ending one. What was traditionally used for cash and coins now carries mostly cards and not much else. And for those of us out there who wear slim-cut pants, a thin wallet is a must. If you can count someone’s cash from the outside of their jeans, either their pants are too tight or their wallet too thick. Regardless, it’s not a great look.

Presently, I use a leather money clip for my wallet. It works well enough. The clips snaps together thanks to the magnets on either end. All in all, I can carry about nine cards and a few bills when needed without things getting too bulky.

So why change something that’s already working? Magnets.

Yes, one of the best features of my old wallet is also the worst. Whenever my wallet comes into contact with any paper or plastic card with a magnetic strip, it almost always demagnetizes it, rendering the card useless. In other words, nearly every hotel keycard or paper parking slip is useless once it comes in contact with my wallet. This has resulted in far too many lost cards and needless trips to the concierge.

All of that brings us to the wallet I’m reviewing, Ekster’s Parliament Wallet. The wallet packs a slim profile with quite a few nifty features baked in. And at $80, this unique wallet is very affordable. Read on for my thoughts. 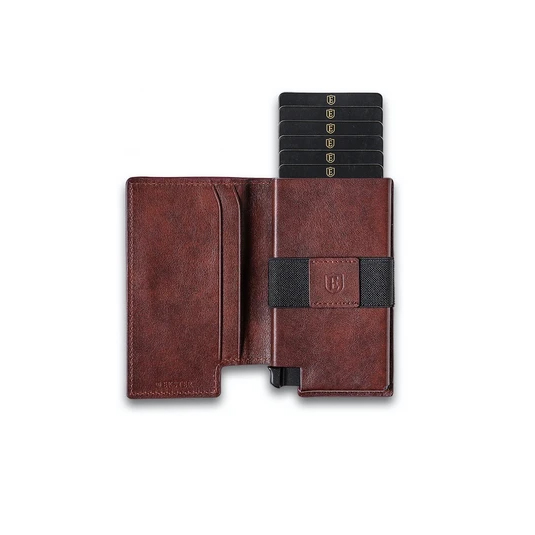 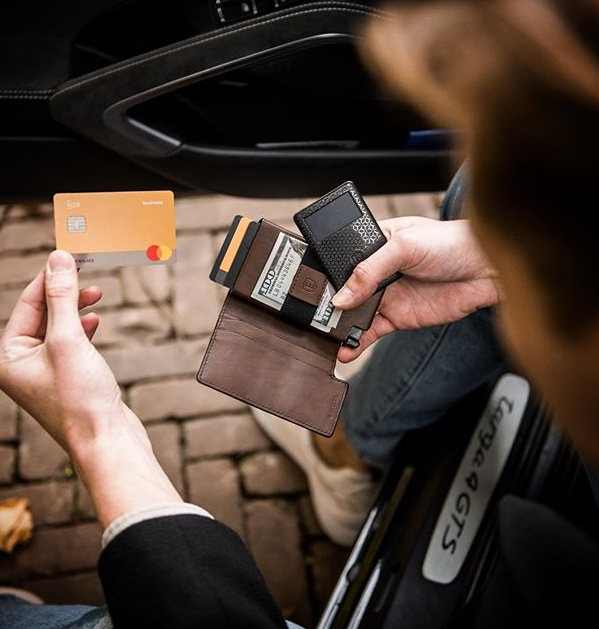 First thing’s first, let’s start with the appearance. Ekster sent me the Classic Brown, and it’s a handsome wallet. The leather is supple and looks like rich, melted chocolate poured into the shape of a wallet. The accents on the wallet are all black, which gives it a well-put-together look. I also very much appreciate the minimal amount of branding. Outside of Ekster’s logo on the bottom right of the wallet’s face (which is an “E” encased in a shield), there’s no branding anywhere. As it should be.

The main card compartment is made of aluminum and can hold up to six credit cards, which are accessed through a trigger-like button on the bottom left of the wallet. I love this feature. Even with my open money clip, getting to the card you want, when you want it, can be tricky. This little trigger smoothly pops your cards out of the holster in descending order, making selecting any card simple.

Outside of the holster, there’s an elastic band that wraps around cash, receipts or other thin items. This component would seem unnecessary but is greatly appreciated. I rarely carry cash, but it does happen from time to time (my barber, for example, is cash only), so I like having the option if it should arise.

There are three other pockets for storage: two more on the inside of the front flap and one on the back. Though it’s $30 extra on their site, Ekster sent along their tracking chip, which is supposed to live in the back of the holster, leaving me with two other spaces to fill. With the tracking chip, the Ekster Parliament transforms into a sleek leather smart wallet.

Overall, my nine cards fit into the wallet easy enough. In fact, I actually like that I can only carry six cards in the main holster because it forced me to be selective. With big wallets, or flexible ones like my old money clip, you tend to accumulate plenty of non-essentials. Ekster forced me to finally drop that Starbucks’s gift card and I’m a better man for it.

Another big plus: no magnets! Since the wallet uses a holster, elastic strap and various pockets to store cards and cash, I could (finally) live without worry of demagnetization. In other words, no credit cards or parking tickets were harmed in the testing of this wallet.

I enjoyed my time with the Parliament wallet, but it’s not without its drawbacks. For starters, it can get a little bulky for a thin wallet. Though the holster is metal, and therefore won’t expand whether you add one card or six, the rest of the wallet will start to bulk up when you begin adding things. The solar-paneled tracker is thin but still a bit thicker than a credit card. And when you add that, a leather flap and a few more cards (or extra cash), you’ll notice the wallet swelling quite a bit. This forced me to stick with just my six cards and cash. Again, not the end of the world, but when holding the same amount of cards, my money clip stayed slimmer. If anything, I wish they made the wallet with just the holster only. I could do without the flap and extra two card slots.

All in all, my issues are small. The wallet worked better than expected, even after I tried breaking the trigger by using it over and over. The tracker is nice for those who are prone to losing things (you can chirp your wallet when it slides between the couch cushions and track it if you left it at a bar). The extra slots aren’t necessary, but they may come in handy if pairing down to six cards isn’t possible for you. Plus, the wallet looks damn good in hand, and that matters.

Buy Now on Amazon
The 10 Most Stylish iPhone Wallet Cases