Holy horologists, Batman! Are you looking for the ultimate nerd status symbol? Then strap this $100,000 limited-edition Batman watch, which comes with its very own bat signal, to your wrist. Part of The Batman Collector Set by Kross Studio, only a handful of these limited-edition luxury watches are being produced, and if there are more than a handful of people in the world interested in buying one, we’d be surprised. The Batman, starring Robert Pattinson, officially comes out in the United States on March 4, and these watches are part of a collaboration between Kross Studio, Warner Bros Consumer Products and DC Comics.

This isn’t even the first six-figure Batman watch that’s come across our radar. Last year, we wrote about a mysterious and one-of-a-kind Audemars Piguet Batman watch. The price tag? $500,000. (Yes, that watch is still available, but the price has gone up to $574,000.)

Why are some men fascinated, nay, fixated by ultra-high-end luxury watches? If you parse out the “why” to its most basic element, the answer is simple.

“Men don’t accessorize to the level that women do,” said Gary Girdvainis, an avid watch collector and the Editorial Director of International Wristwatch and About Time magazines. “So, I think they put more investment into accessories on their wrist.” Girdvainis has been observing men’s luxury watch buying habits for years, and he told SPY that these accessories are still coveted status symbols among a certain type of man.

“You can’t drive your Ferrari into a boardroom, but you can wear your Patek, your Audemars, or your Rolex if you’re trying to impress someone else,” Girvainis said. ”And that’s the thing, I also think that the locus of the ego, whether you’re self-centered, or trying to impress people, is dictating what you wear.”

Read More: The Best Men’s Watches for Every Budget and Style 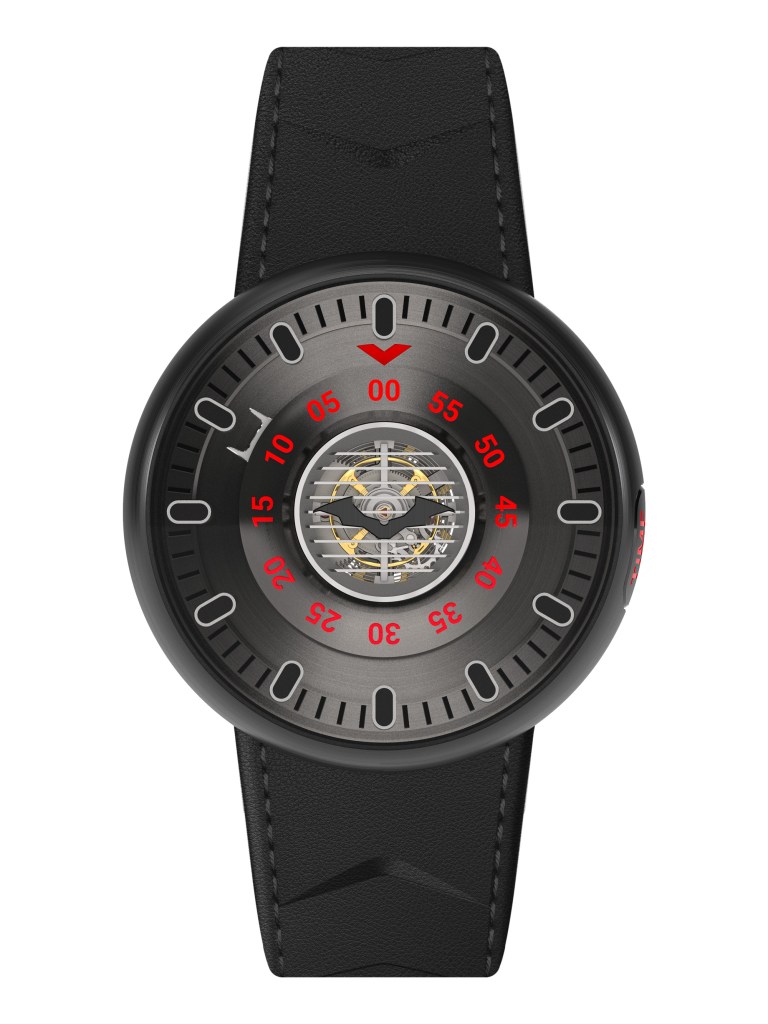 About The Batman Collector Set by Kross Studios

If you love nerd pop culture and have a few hundred thousand dollars to spare, then Kross Studio has spared no expense to create a luxury watch that’s an experience unto itself. The 10-piece “The Batman Collector Set” comes in a specially designed wooden box. The set includes a miniature (and functional) bat signal that can be used as a desk lamp. Hidden in its back is a dedicated place to store your new numbered Batman tourbillon watch. 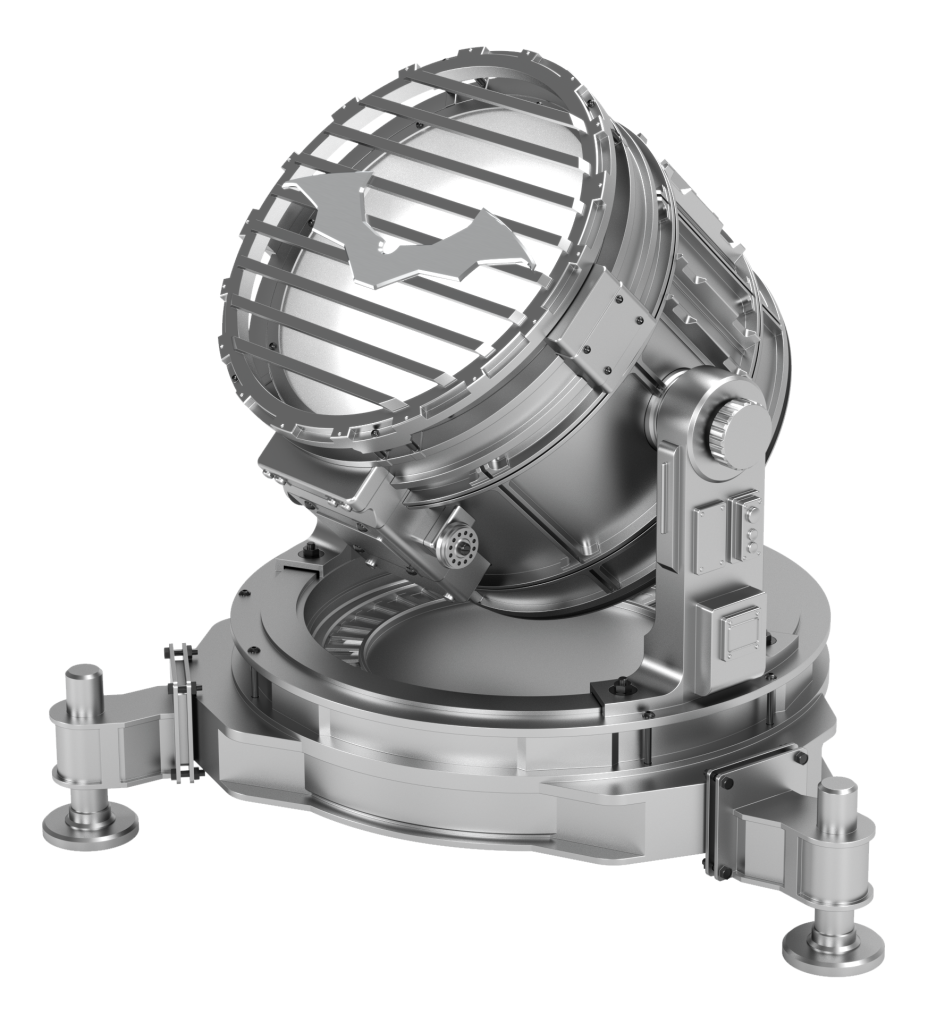 The watch’s style references the Dark Knight’s costume with a black-on-black DLC coating over a grade five titanium 45mm case. The dark colors match Batman’s costume and famously emo vibe, but all-black watches have also become a major trend in the watch market in recent years. Wearers will have to wind this watch by hand, and the luxury timepiece has a five-day power reserve. The center of the watch features a louvered cage tourbillon with the bat symbol dead center, and an inner dial displaying the minutes rotates at one revolution per minute. Peek through the louvers and you can watch the regulator at work. Finally, a domed sapphire crystal protects the watch’s inner workings.

According to a press release, “Altogether, the movement and watch components total 283 parts, each hand-made and assembled on-site by Kross Studio in Gland, Switzerland.” In addition to the black calf leather strap, the collector’s set also comes with black and red rubber straps.

To set the watch’s time, turn the case back’s D-ring in either direction while pressing the “Time Set” button, which can be found by the 3 o’clock. (For the complete tech specs, head to Kross Studio.) 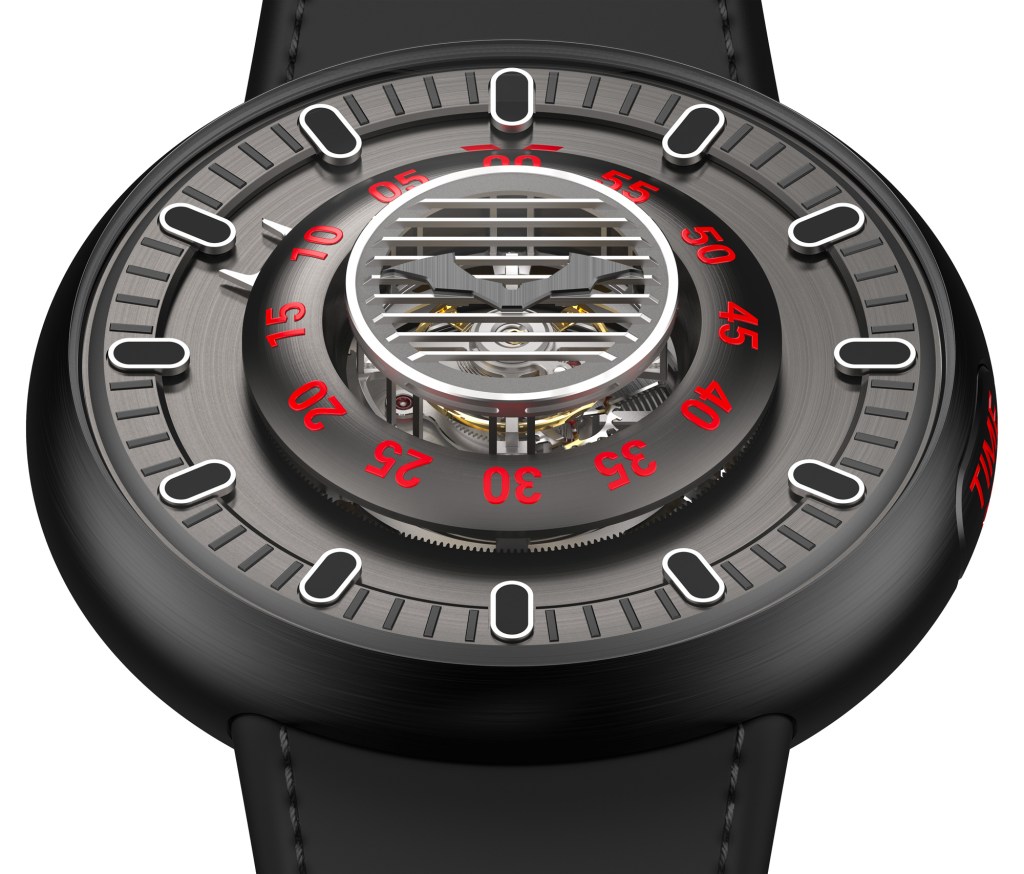 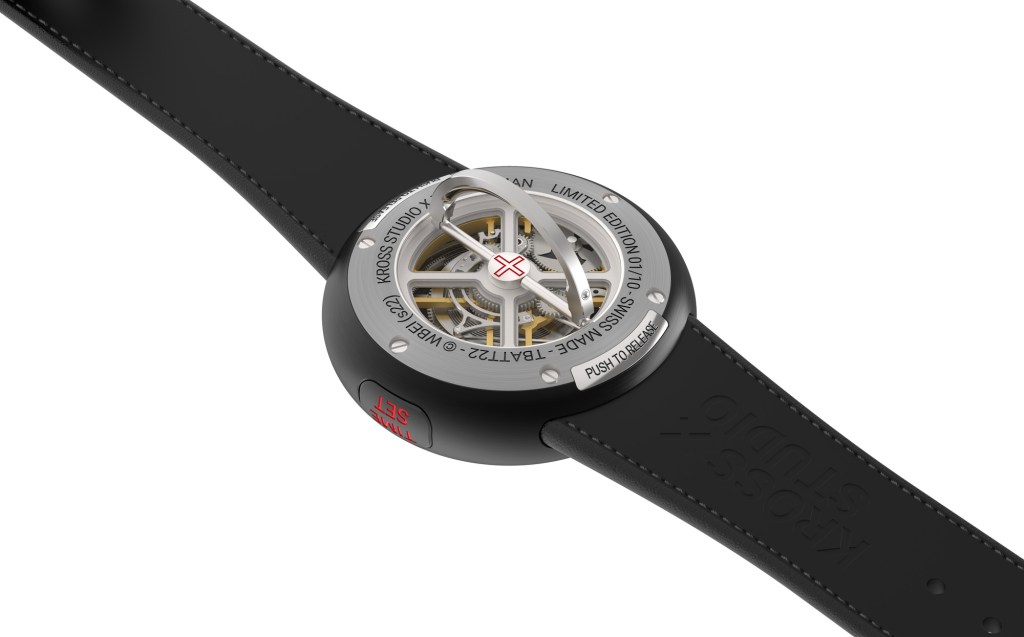 Why would Kross Studio partner with Warner Bros. Consumer Products and DC to create a technical masterpiece with such an unattainable price tag? Comic book heroes are at the center of pop culture thanks to Marvel and DC, and what was once considered “fringe” or “nerdy” has become “Geek Chic.” To the wealthiest nerds, like tech entrepreneurs with an unlimited budget, buying a themed watch is like owning a prestigious movie souvenir.  As Girvainis points out, “If you think about it, the people who grew up with that (Batman comics and movies), are now of an age where they can now afford more expensive items.”

But, really, who is buying a $100,000 Batman watch — and in this economy? We asked Girvainis this question, a couple of times. He said that “it might be a bit of attachment from their previous life when they were growing up, and now they can afford something. You know this isn’t unprecedented (using pop culture items in luxury watches), even 20-25 years ago, Gerald Genta was putting Mickey Mouse on his Octa series watches. He made a Mickey Mouse watch that was one of the first to really take a playful approach to luxury.”

Some luxury brand watches will design and create a limited-run watch every now and again. Serious watch collectors will snap up these timepieces and either place them in a safe or display them in a watch case, never to be worn. Other luxury watch buyers are looking for a statement accessory. 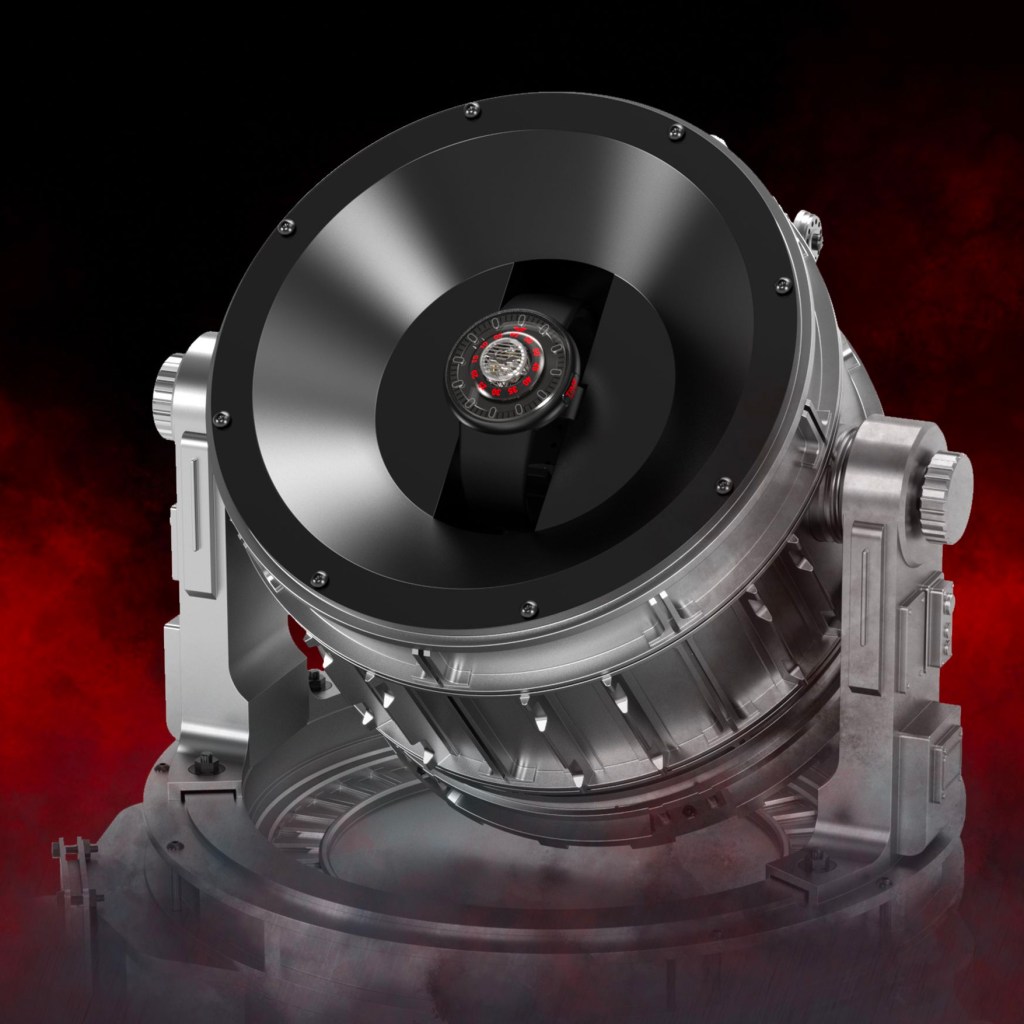 “It takes a certain personality type, you must have the financial wherewithal, and it’s also a certain personality type that’s going to stray from the beaten path, “ explained Girvainis. “Those that choose the path less followed look for these types of rarities because they’re not going to see it on someone else’s wrist. The odds of someone else wearing it is slim to nil. A watch [like this] is an expression of your own taste as well.”

Kross is also appealing to younger luxury shoppers, who might be less interested in traditional status symbols.

“I think a person who buys Kross is someone who appreciates maybe pop art, who might be into Takashi Murikami, who might be into streetwear, who might be a sneakerhead,” said Rachel Taliaferro of Ana Martins Communication, a public relations agency that assisted Kross Studio with the rollout of the Batman watches. “They might be into cars; these things are all collectible in their own spaces, and to those audiences. For Kross, it’s proven to be that collectors just skew a little younger. They might be high net worth people of a slightly younger age.”

When shopping for a good watch, whether it’s a “starter” style from a luxury watch brand or a timepiece that’s higher up the food chain, a true high-end watch can also appreciate in value over time. So if the economy goes bust, selling a limited edition watch or two could provide immediate cash when needed.

“It was after the crash in ’08, I started getting phone calls from investors asking if watches were safe havens for money, and if so, which ones should they buy,” Girvainis said.

In short, The Batman Collector Set and limited-edition watches can be used to signal one’s wealth and nerd cred simultaneously. Like the Death Star watch set, Kross Studio’s new Batman collection is a limited-edition release. Interested buyers will need to contact Kross Studio directly to arrange a purchase. 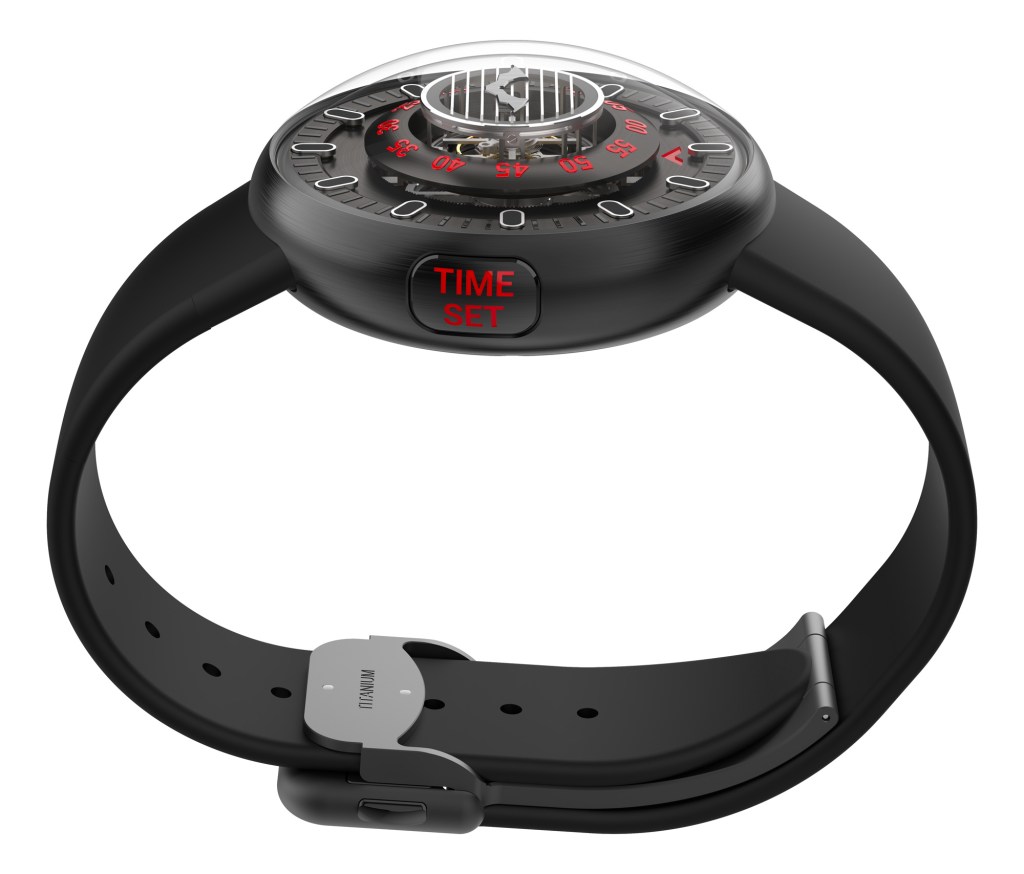 Our Favorite Ceramic Watches To Buy This Year