There is a certain allure to men’s watches, especially when it comes to the most expensive watches that are available for purchase. They’re seductive looking and seem to whisper power. The daunting price tag also seems to add to their attraction. The interesting thing about the most expensive watches for men is that many of them cannot be bought online. Rather, you’re teased with glossy photos and text that beckon you to visit the store in order to lightly caress them.

Why are the most expensive watches so expensive?

We’ve hunted around and found the 10 most expensive watches that you can buy right now, as is in like today, online. The first thing you’ll notice when dealing with super high-end expensive watches is that most of them are limited editions, they are always made in small batches. One of the other things you’ll notice with the most expensive watches available is that they use a lot of precious metals, and are sometimes dusted with semi-precious and precious stones. The higher you go up in price, the more complex the watchmaking becomes. At this price range, you’ll come across tourbillions, skeleton chronographs, skeleton aviators and, well, pretty much anything that you can combine a skeleton style watch. The measurements and movements are so precise that they rival the clock that keeps Greenwich Mean Time.

Before we hop into the most expensive watches, let’s go over a couple of definitions of the different types of watches available.

Shopworn is an online retailer of new fine watches and designer goods. The company buys up unsold stock from stores and then re-sells them for a lower price online. We’ve used a few of their watches in previous roundups and have included two in this one. They are currently offering 20% sitewide on ShopWorn by using code SPY for our readers only.  This will be good until the end of the year and cannot be combined with any other offer.

Roger Dubuis is a Swiss watch company that produces around 5,000 watches a year. Originally Dubuis worked for Longines and then Patek Phillipe. He and Carlos Dias created Roger Dubuis watches in 1995. Each of their creations is painstakingly made by hand. The Excalibur collection of watches has a separate collection for men and one for women. This Excalibur Aventador S skeleton watch is one of a limited edition of 88 watches. The housing is forged carbon, it has an autonomous stability program, the hands are rhodium-plated 18k karat PVD-gold Super LumiNova and is powered by a calibre 103SQ movement. 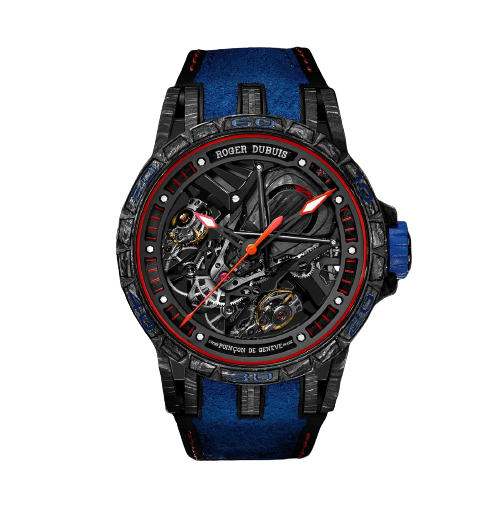 Jaquet Droz has been creating watches since 1738, so strapping one of these watches on your wrist is like wearing history. This watch has a beautiful cutout and a sectioned black opaline dial with off-center Roman numerals, a power reserve indicator at the 10, a retrograde indicator at the 2 and the tourbillon that has a vertically aligned bridge at the 6. When the watch is fully wound, it has a power reserve of 88 hours. The case size is a massive 47mm and made from 18K red gold. There are only 18 of these watches in existence. The regular retail price for this watch is $190,300. The ShopWorn price is 40% off or $114,180.00. 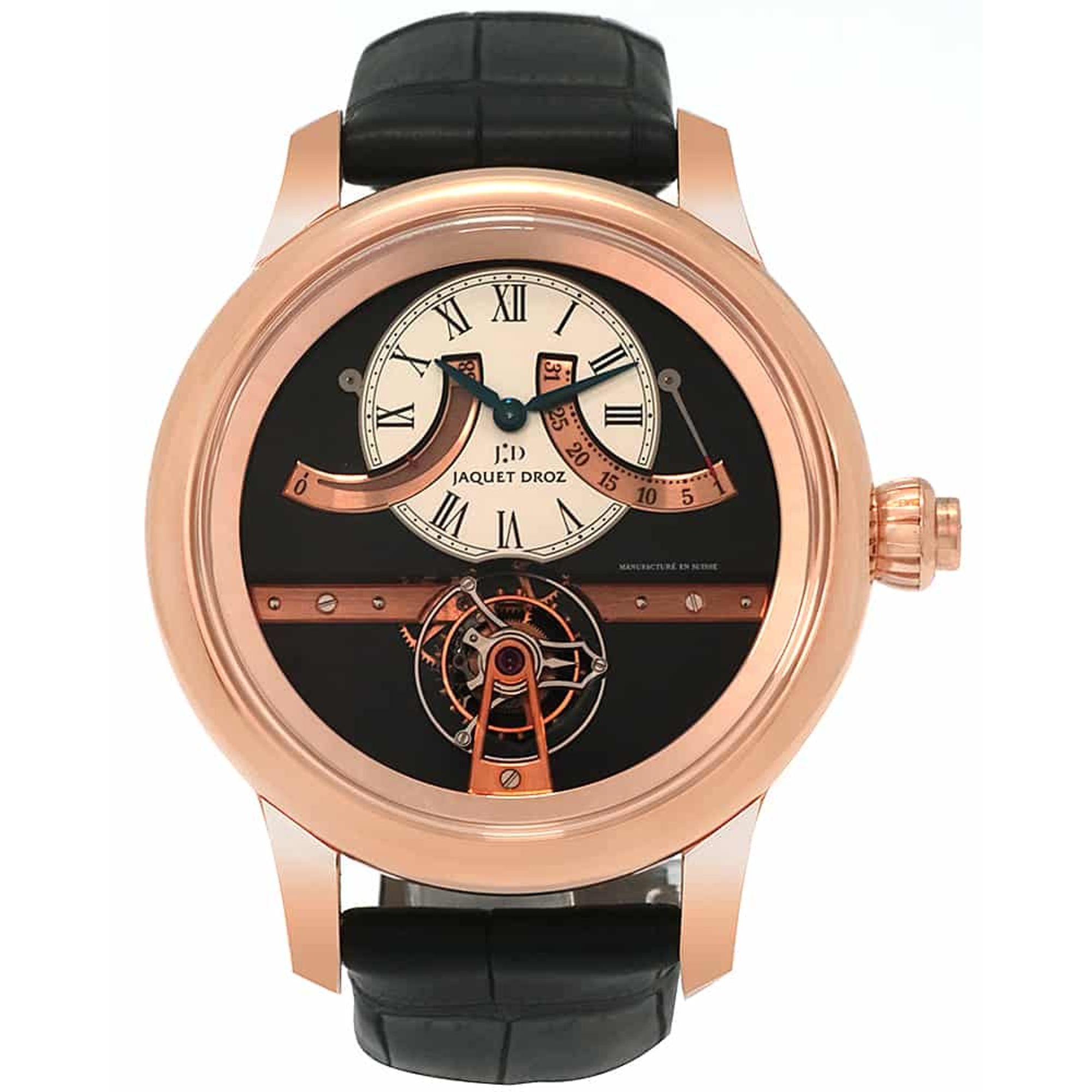 Watchmaker Hublot always does an incredible job of marrying modern sensibilities with classic craftsmanship. Take their Spirit of Big Bang watch. Brightly colored straps bookend the sexy skeleton unico automatic chronograph with a tourbillon. If you’re lucky enough to purchase one of the 100 watches that were created, you’ll notice that the case is made with carbon fiber and blue composites, and it is manual winding with a power reserve of 115 hours. The crystal and dial are both sapphires, and the 42 mm watch is water-resistant to 30 meters. 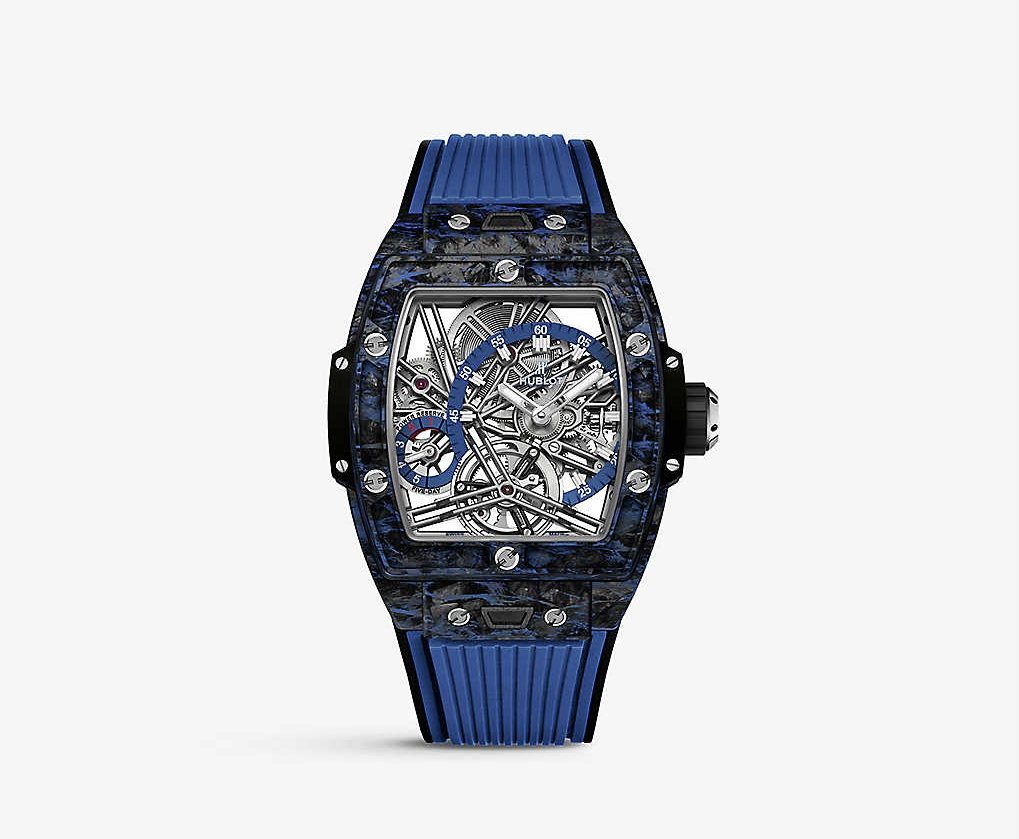 Vacheron Constatin is another luxury watchmaker whose origins are based in the 1700s. For them, the year they became a company was 1755. This rose gold and navy watch is a perpetual. While one might think that if they see a grouping of subdials on a watch’s face or dial, it’s a chronograph, with a perpetual, each dial is tracking calendars. This watch has a day of the week, date and a 48-month counter that includes leap years. It’s an automatic with a self-winding movement and has a polished 18K rose gold bezel. 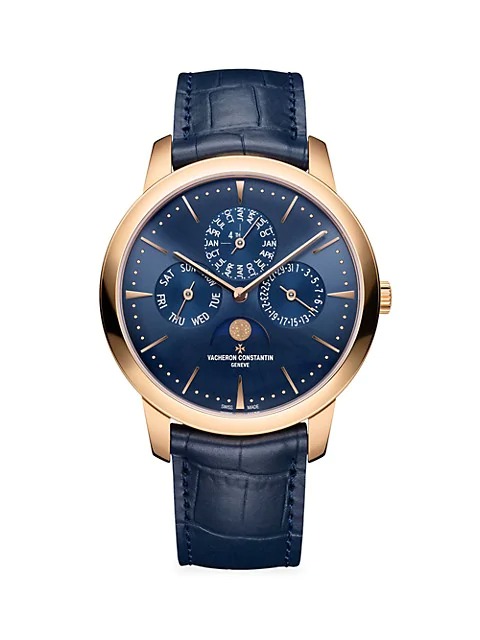 Franck Muller is a relatively young watch company when you compare them to the established brands. However, the watches have the same star power when discussing the complexities of their mechanisms and their celebrity buyers. After working with an independent watchmaker for years, Muller struck out on his own after he created a tourbillon in 1984, which is no mean feat. After handling private clients for years, Swiss-born Muller started his own company in 1991. He and his company are known for creating incredibly complicated watches (the guy built his own tourbillon) that are as artistic as they are mechanically precise. Celebrity fans include Kanye West, Eva Longoria, Elton John, David Beckham and Floyd Mayweather. His round skeleton watch is part of the brand’s round skeleton collection. This model has a skeleton watch which is encircled with 4.25-carat diamonds that sit in a white gold 42mm case. The watch is finished off with a white alligator strap. 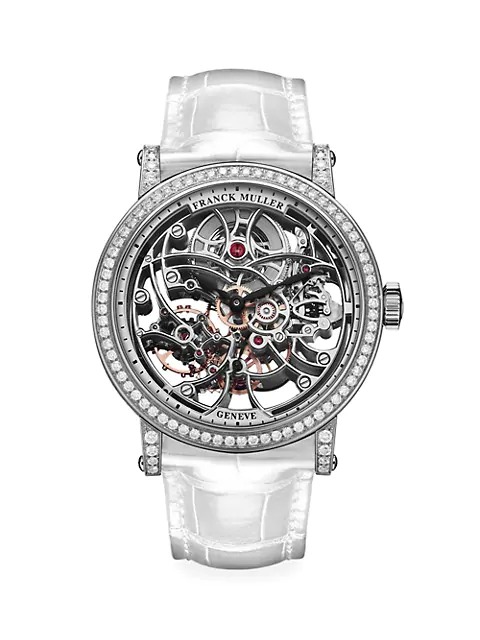 The first Audemars Royal Oak watch was released back in 1972, and it caused a sensation as the stainless steel watch was a unique combination of luxury and sport. Over the years, the Swiss watch company releases variations on their famous style. This Audemars Royal Oak watch echoes the original’s design with the same octagonal bezel, textured dial and link bracelet. However, this 41mm self-winding model is made with 18K pink gold instead of stainless steel, and even the watch’s hours have had 18K pink gold applied to them. The watch is water-resistant to 50 meters. 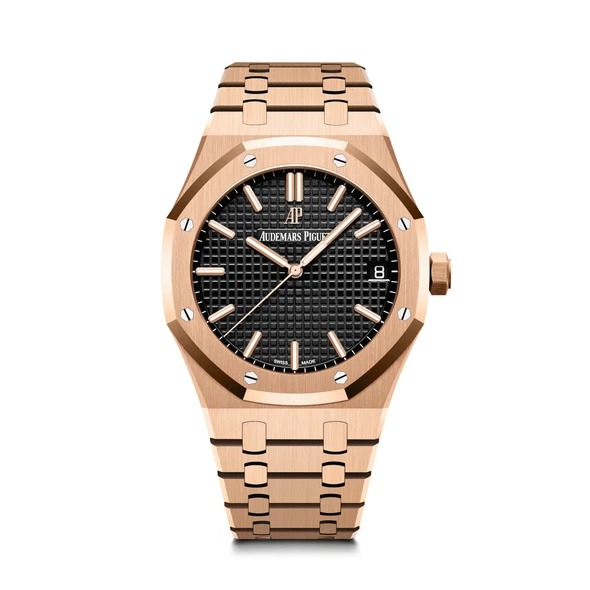 To many people, a Rolex Oyster watch is the alpha and omega of fine watches. It’s been bandied about in so many books, TV shows and movies, one would almost think that it’s the only luxury watch around. There are Rolexes that go for close to a million, and there are “starter” Rolex watches that hover around 10K. This Rolex Sky Dweller was made for the inveterate traveler as it has a second time zone clock built as a circle within the face. This 18K gold watch also has a date window, a 42mm case, and has the Rolex Calibre 9001 automatic movement with a 72-hour reserve. It’s also water-resistant to 100 meters. 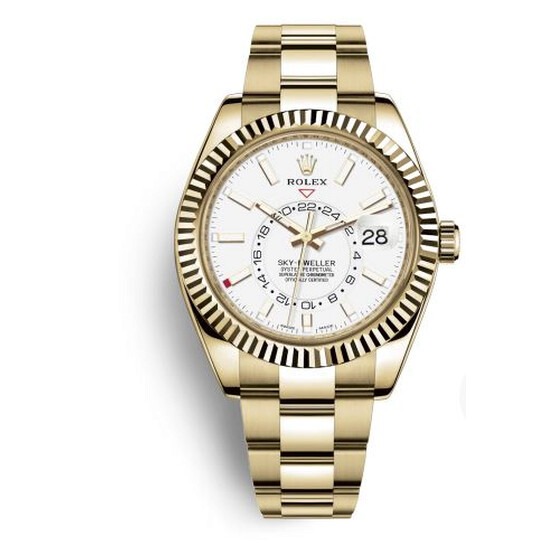 Here’s some watch trivia for you; Buzz Aldrin wore an Omega Speedmaster on the moon, and Elvis Presley’s 1960 Omega watch sold for 1.8 million dollars at auction. When you slip on an Omega watch, you’re in very, very good company. Chronometers are prized for their preciseness, and this model is, one could say, the perfect combination of art and science. The face is bedazzled with 498 pave diamonds on its dial, and marquise-cut blue sapphires are used to indicate the hours. The bezel is set with a ring of diamonds around its 35mm case. This incredible and expensive unisex watch is made from 18K Sedna gold. This is a chronometer, which means that it is insanely accurate and certified by the CSOC. The watch’s movements are driven by the Master Chronometer Calibre 8807. 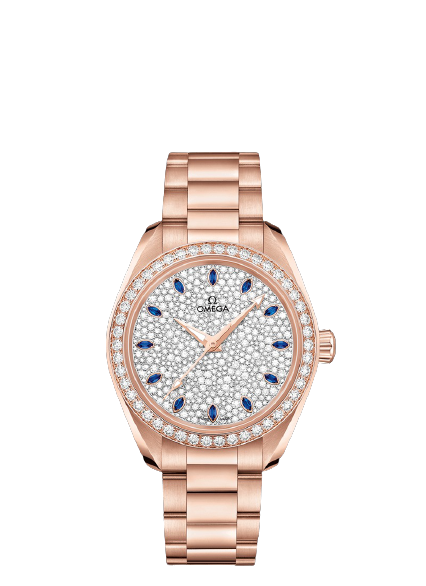 HYT is a modern Swiss watch company, they launched in 2010 and they combine the newest tech with classic watchmaking. They use hydraulic transmission inside the watch. Notice there are two tubes that can be seen on the watch’s face. Those are reservoirs for liquids, one that is fluorescent, they do not mix. When the first reservoir is compressed, it pushes the first liquid up a tube around the watch, which then displaces the liquid in the other reservoir. As time passes, the liquid completes its circuit and the whole thing starts all over again. This model, the H1 is made from rose gold and titanium and is a manual winding watch. It has a 49mm round case, Swiss manual movement and a transparent back. This watch normally retails for $79,0000 but is for sale on ShopWorn for 45% less at $43,450.00. So, yes, it’s still one of the most expensive watches, but hey, at least it’s on sale! 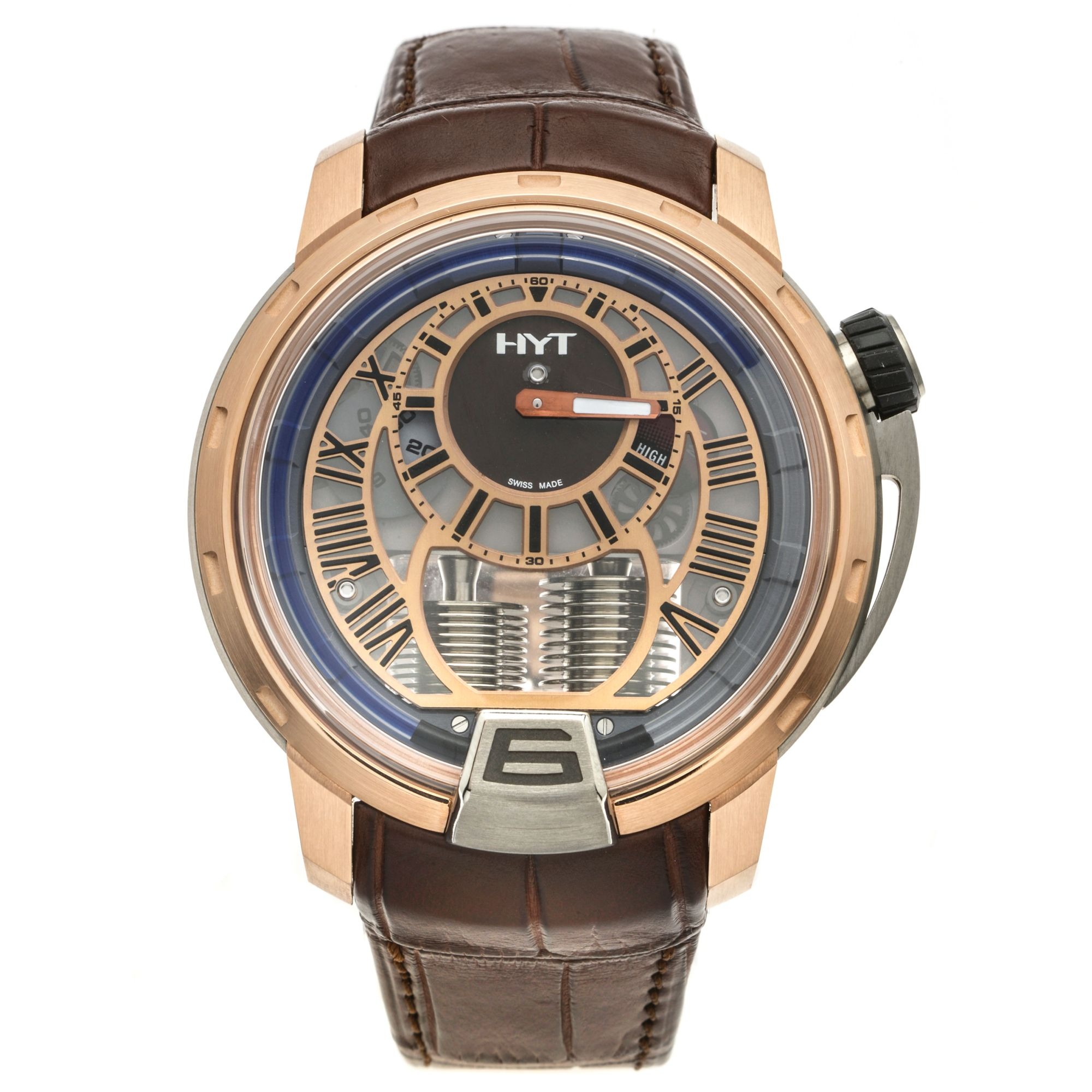 Tag Heuer is yet another Swiss watch company, and they’re known for their sporty watches. Back in the 1950s, they had a deal with the American sportswear store Abercrombie & Fitch (the chain was quite different back then) to create two different watches for them. There’s a distinct possibility that working with a popular, yet elite sports outfitter, raised the brand’s consciousness to the American consumer.

This watch is part of the company’s partnership with Aston Martin that dates back to 2018. The brown leather strap comes from Aston Martin, and the general design of this watch reflects both companies’ love for sleek design and speed. This Tag Heuer is an incredible buy for what it holds within its case. It’s a chronograph that is also a certified chronometer, and to top it all off, it has a tourbillon. All that for under thirty thousand dollars. Is it one of the most expensive watches? Yes. but for what you’re getting in a collab with such a legendary automotive brand, it’s a (relatively) good deal. 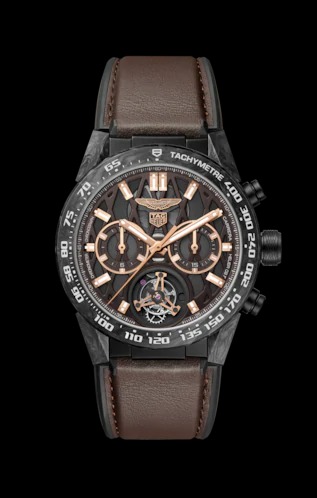