I remember being in middle school around 2007 when I first saw Kanye West repping shutter shades. You know, those lensless plastic glasses with slits across the front, covering about 50% of your eyesight in the process? They had a grip on me like no pair of cheap sunglasses ever had.

I wasn’t the only one enamored, either. Social media manager Tatyana Jenene Kemp at Vibe shares how iconic the shades were in her life as well. “As an HBCU student of the aughts, I was extremely dedicated to Kanye West and the whole ‘college’ trilogy,” she says. “College Dropout came out my senior year of college, so my mom got me a (very, very fake) Louis Vuitton bookbag. When Late Registration dropped my sophomore year of college, she bought me a real LV bookbag, and an array of Polos. So, naturally, when Graduation came out, I bought myself jean jackets and shutter shades to match the then love of my life.”

The style went berserk throughout the hip-hop community. Mid-aughts celebs from Snoop Dogg to Lil’ Jon to Paris Hilton were caught up in the trend, making shutter shades a phenomenon that expanded worldwide. Anybody who was anybody in 2007 either wanted or owned a pair of shutter shades.

So where the hell did they come from, and where did they go?

The History of Shutter Shades

While shutter shades are taking notes from slatted eyewear worn by indigenous peoples in Alaska and Canada centuries ago, shutter shades are said to have derived from the eyewear brand Alain Mikli. This brand designed the shutters Kanye specifically wore for the “Stronger” music video in 2007, which helped the trend explode in popularity.

Designed for #KanyeWest for his 'Stronger' video in 2007, these
shutter-style shades are now often referred to as “Kanye West glasses” pic.twitter.com/Slxw4gKHyX

But shutter shades also came with something else: a trademark. Shutter Shades, Inc. was created in Los Angeles around the same time Kanye was popularizing the look. The creator, Todd Wilkerson, alongside help from many friends, says that these glasses were something he initially made for himself. Upon attending a party one evening, partygoers became obsessed with the look, grabbing his glasses left and right. That’s when he realized he could turn the look into something bigger.

Shutter Shades, Inc. became popular after an ad in a September 2007 issue of Us Weekly directed folks to their website to purchase the shades. After doing trade shows throughout early 2008, Wilkerson mentions the sheer number of knockoffs he was seeing online at the time.

Technically speaking, the music video for “Stronger” was filmed in April of 2007, which predates Shutter Shade’s claim that its popularity derived from Us Weekly Magazine, but it might have just been a mix of the two, given that Alain Mikli did not trademark the original design.

Shutter Shades expanded into the brand they are today after finding knockoffs and began selling glasses, tees, hats and more. Hypebeast, in addition to a slew of different fashion blogs, popularized the look and the branded Shutter Shades name even further from then on.

In 2008, Shutter Shades collaborated with Kanye West, landing a spot selling their shades during his Glow In The Dark tour stops featuring Rihanna and N.E.R.D.

From there, the brand and the style fell off. New trends appeared, and the slatted shades we all knew and loved became a fashion history ghost.

Shutter Shades became shutter shades again after a court ruling in 2015 decided “shutter shades” was a generic term. From then on, these glasses are really only seen in Party Citys across the United States and occasionally falling off a drunk person’s face in the stands of the World Cup. 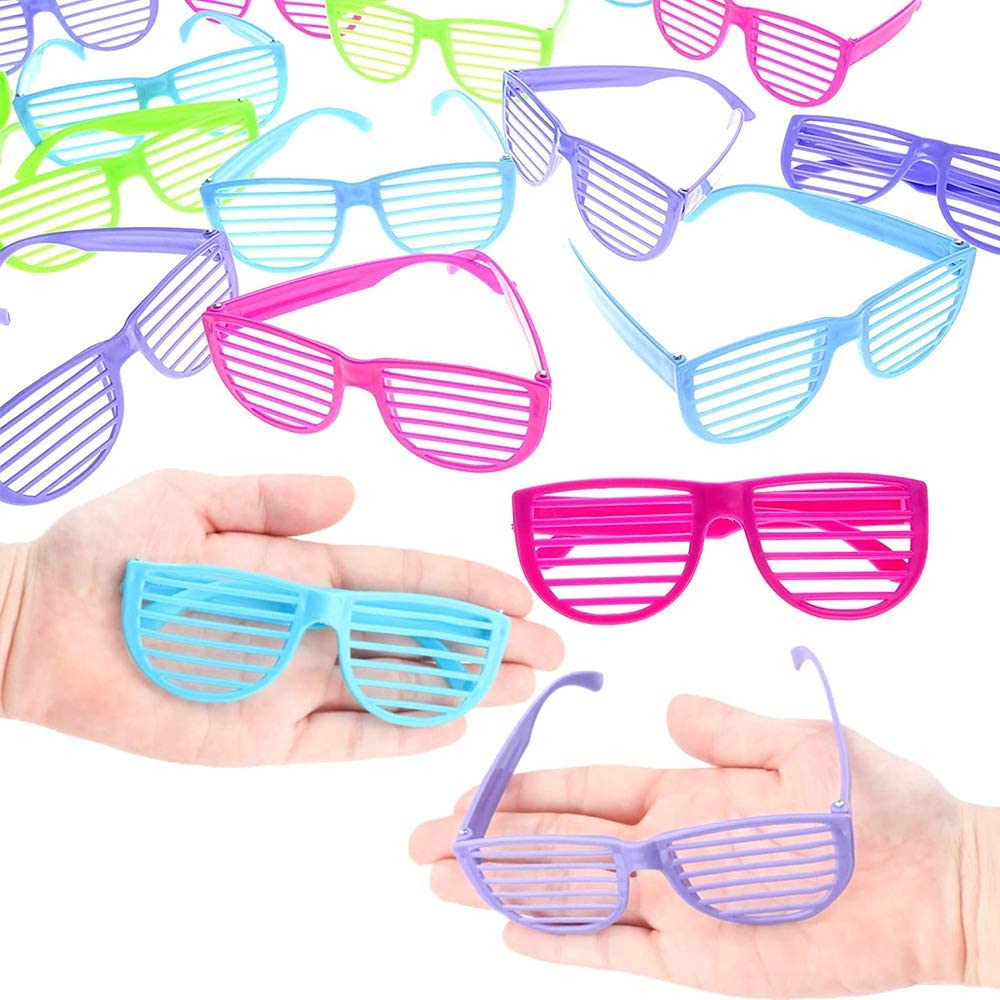 Nonetheless, the style was huge but especially in hip-hop. “After Kanye made these shades popular, they became a symbol of a few short-lived but impactful eras in hip-hop, like the Futuristic era in Atlanta from 2008-2010,” Tatyana Jenene Kemp says.

But, here’s the thing: They were aggressively impractical. “You couldn’t see well with them on,” says Kemp. “They were extremely oversized, and at some point, I realized wearing sunglasses in the club was weird.”

That said, do I think shutter shades will ever make a comeback and see popularity the way they did back in 2007 and 2008? Probably not. But, weirder things have happened. Maybe shutter shades will have their reign once again and become the best sunglasses of 2032. Only time will tell.

Kanye West Claims Adidas Ripped Off His Yeezy Slides — Do You See a Resemblance?