Damascus steel has taken on almost legendary dimensions. If you’re a fan of knives and history, then you probably know what Damascus steel looks like. SPY is here to cover everything else, including Damascus steel’s historical origins and loss, its “rediscovery” and how it’s made today, what’s good about it and a few great Damascus steel knives.

What Is Damascus Steel?

Damascus steel has been around since before the time of Alexander the Great in the 300s B.C., originating with the production of wootz steel in India, which had impurities from being made in a high-temperature crucible. As this steel spread, it was forged into weapons notable for their unique watery bands as well as their strength, sharpness and durability. But the tough, beautiful blades only became more widely known in the Western world when Crusaders encountered them in the Near East and Middle East in the 11th century.

The name “Damascus steel” only complicates the origin story. It may be that the famous swords were named after the city in Syria because they were made or sold there. At the same time, it could come from the Arabic word “damas,” which means watered, in reference to the patterns. Or it had to do with the patterns, which resembled damask fabric. In any case, the name stuck and the steel was produced through the centuries.

How Was Ancient Damascus Steel Made?

The exact techniques for making historical Damascus steel are lost because medieval sword makers wrote nothing down to protect their methods. Though Damascus steel makers existed through the end of the early modern period, the steel’s popularity waned amid the advent of gunpowder and the techniques ultimately disappeared.

Thankfully, scientists have a pretty good idea of how the swords were made and what gave them their unique patterns thanks to surviving Damascus steel swords and academic and scientific research.

In 1980, two material scientists at Stanford University, Drs. Jeffrey Wadsworth and Oleg D. Sherby, realized the steel that they had made resembled ancient Damascus steel, according to The New York Times. Through studying their process, they were able to reveal how the ancient swords were likely made:

How Is Damascus Steel Made Today?

Modern Damascus steel doesn’t rely on wootz because there are better, more high-quality steels available. The most common method is called pattern welding, a kind of laminated steel process that involves welding multiple layers of different steels together.

Here’s how it works:

The truth is that there’s no single reason beyond beauty to purchase Damascus steel over other kinds of knives. Chad Nichols of Nichols Damascus, one of the best known Damascus steel makers, said modern Damascus steel is definitely better overall than non-modern steels; but other modern steels, depending on their alloys and make, can be much better for particular tasks. But at the end of the day, people buy Damascus steel because it’s pretty.

In other words, it’s the alloy and what the bladesmith does to it that ultimately makes a knife worth buying, whether it’s Damascus steel, stainless steel, carbon steel or some other alloy.

That being said, you can get all kinds of all-around great Damascus steel knives, including those with carbon steel, stainless steel and titanium alloys as well as versions with specific kinds of patterns and designs. That means they can be as versatile as any other knives when cared for and used properly.

First, most Damascus steel blades tend to be high in carbon and low in other materials like chromium that go into stainless steel. That means they require a little more maintenance to avoid rust. Since most people don’t want to deal with that, knifemakers create more stainless steel instead.

Second, the best Damascus steel is made by expert craftsmen like Chad Nichols, Devin Thomas and Jeremy Marsh, but that means it takes time and time costs money. Major manufacturers like Spyderco make Damascus steel blades as well, but because they don’t make as many, they still tend to cost more than many of their stainless steel products.

But all steels come with pros and cons, and Damascus steel is mounting a comeback thanks to its beautiful appearance and professional knifemakers who are creating better Damascus steel tools than ever before.

If you are interested in picking up a Damascus steel knife, check out some great options below at a variety of price points.

1. The Chapter From The James Brand

The Chapter from The James Brand is the epitome of high-quality, modern Damascus steel. Made with a Swedish-produced stainless Damascus steel, a titanium frame-lock construction and an extreme attention to detail, this knife works as well as it looks. 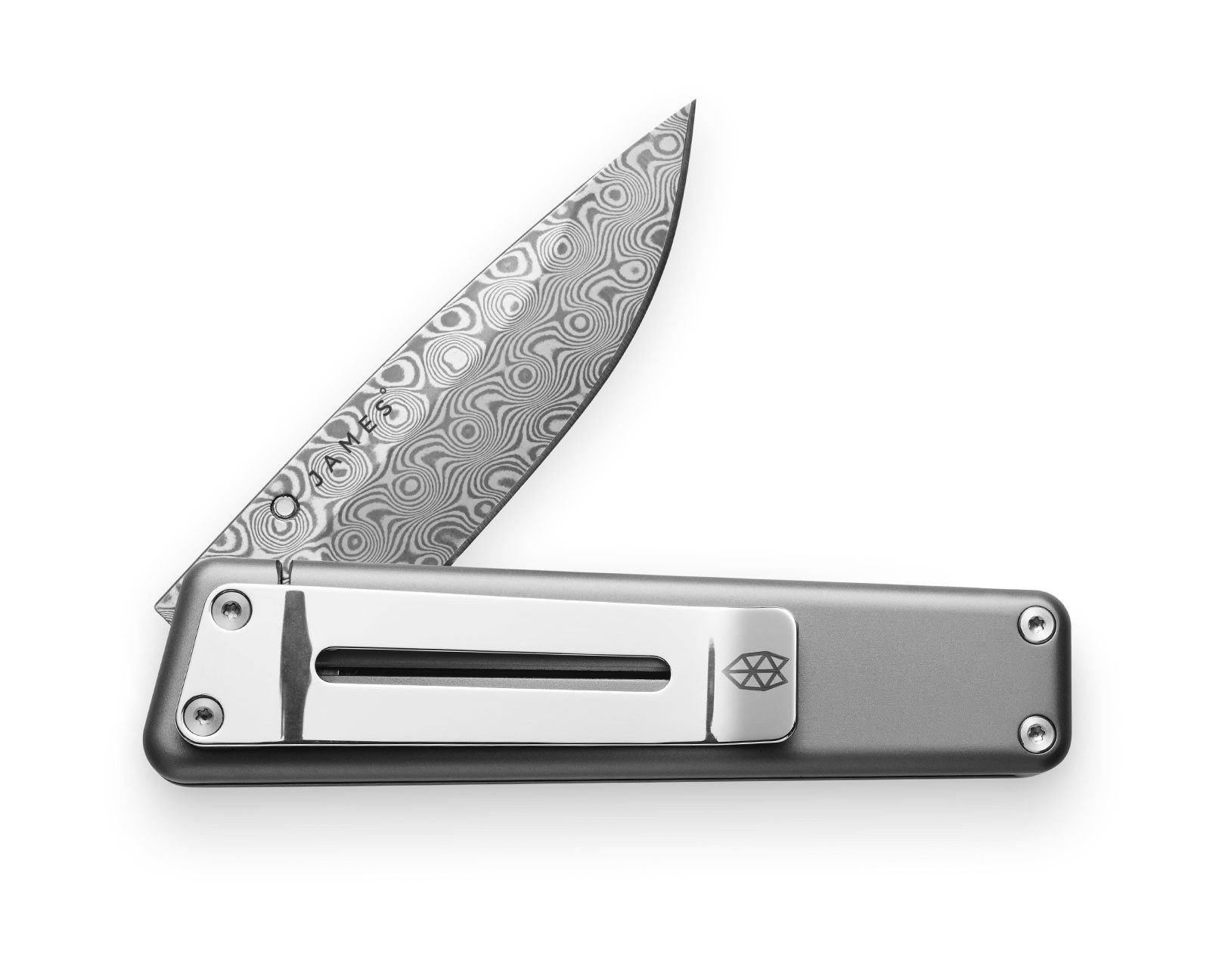 Courtesy of The James Brand

The Chapter from The James Brand

The Bear & Son Tanto Butterfly Knife combines the two coolest knife features in the world: Damascus steel and a butterfly deployment. You could pay more for a Damascus steel knife, but why, when this knife has more than enough beauty and cool factor — not to mention fun? 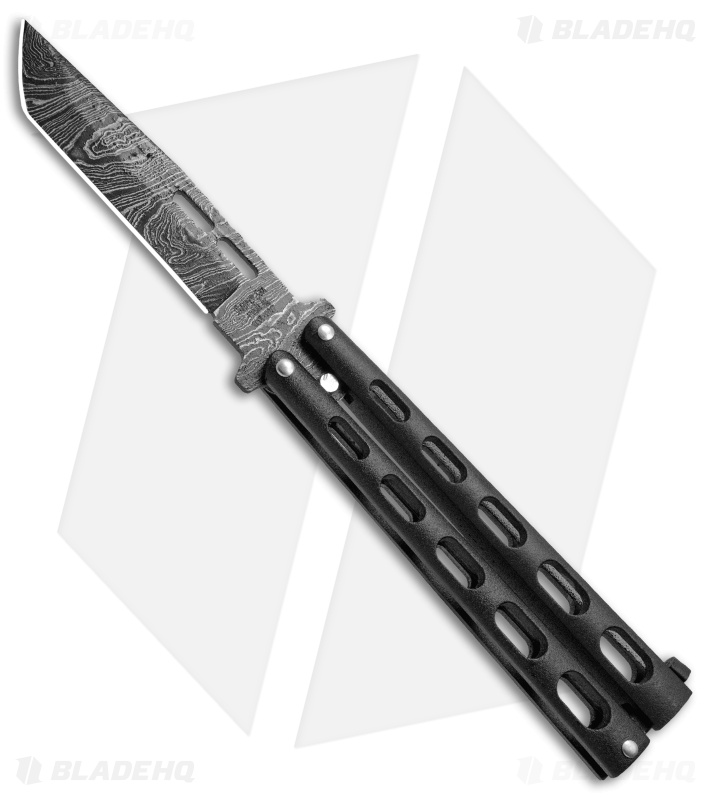 The OrkloKnife Damascus Folding Pocket Knife offers everything you want a Damascus steel knife to look like without breaking the bank. You get a beautiful Damascus steel blade and any one of a variety of woods for the handle, including rosewood, white bone and black horn. Plus, for a bit more money, you can have the handle laser engraved for a personal touch. 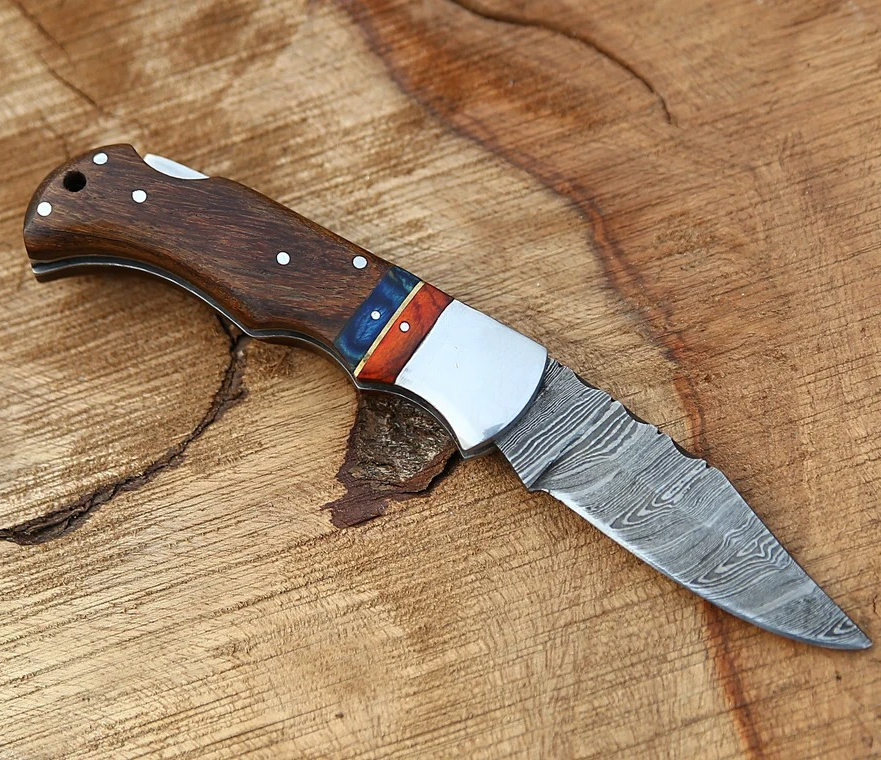 When You Really Need a Knife That Won’t Fail, Bring Along the Best Fixed-Blade Knife