Allbirds is relatively new to the running shoe game, having debuted their first dedicated running shoe, the Tree Dashers, earlier in 2020. (Allbirds first shoes were called Wool Runners; however, they were not performance running shoes, but rather casual sneakers for everyday wear.) Their latest shoe, the Wool Dasher Mizzle, is basically a souped-up version of that shoe that’s made to do battle with the elements. As a runner, I was curious to try them out. Lucky for me, I work at SPY, and Allbirds was kind enough to send me a pair for testing.

Below, my breakdown and thoughts on their latest running shoe, the Wool Dasher Mizzle.

Who Am I and Why Should You Care?

Before we get too far, I’d like to offer up a quick disclaimer: running is a personal sport. My all-time favorite shoe (Brooks Adrenaline) may not be your favorite shoe. Depending on height, weight, footfall and milage goals, a hundred different runners could love a hundred different shoes. I say this not as a cop-out, but to remind you that my thoughts aren’t gospel. If you’re at all intrigued by these shoes, go out and give ’em a try!

Now, why should you listen to me at all? I’ve been a runner longer than I haven’t been one. I ran Cross Country in high school, nabbing a PR for the 5k below 16mins (depending on the course) and eventually wound up at the University of San Diego running D1 Cross Country and club Track (we were too small at the time to have an official D1 Men’s Track team). All of this is to say I’ve spent A LOT of time pounding the pavement. In high school, I averaged 40 to 50-mile weeks. In college, I was hitting closer to 70 or 80 miles per week. When you put in that sort of time, you develop an intimate relationship with your running shoes and understand them in ways that cannot be learned from reading articles or product reviews.

The Wool Dasher Mizzle is the second shoe in the Dasher series (behind the aforementioned Tree Dasher). The upper is made of merino wool and treated with something Allbirds calls “PuddleGuard” technology, which is basically waterproofing that is also breathable. But, in typical Allbirds fashion, all of this waterproofing tech is also eco-friendly.

Like the Tree Dashers, the sole of the shoe is made from an eco-friendly EVA midsole that is tuned towards responsiveness (aka cushion that isn’t so cushiony that you lose energy with each step). Unlike the Tree Dashers, however, this shoe has added grip to the bottom so running in the rain isn’t an issue.

Allbirds also went a step further and added a bunch of little safety details, namely a reflective logo on the heel tab and reflective lacing to help improve visibility for cloudy evening runs.

To sum it up: the Wool Dasher Mizzles are light, weather-proof running shoes that can handle puddles or rainstorms, and they’re a great option for people who already love Allbirds wool shoes. 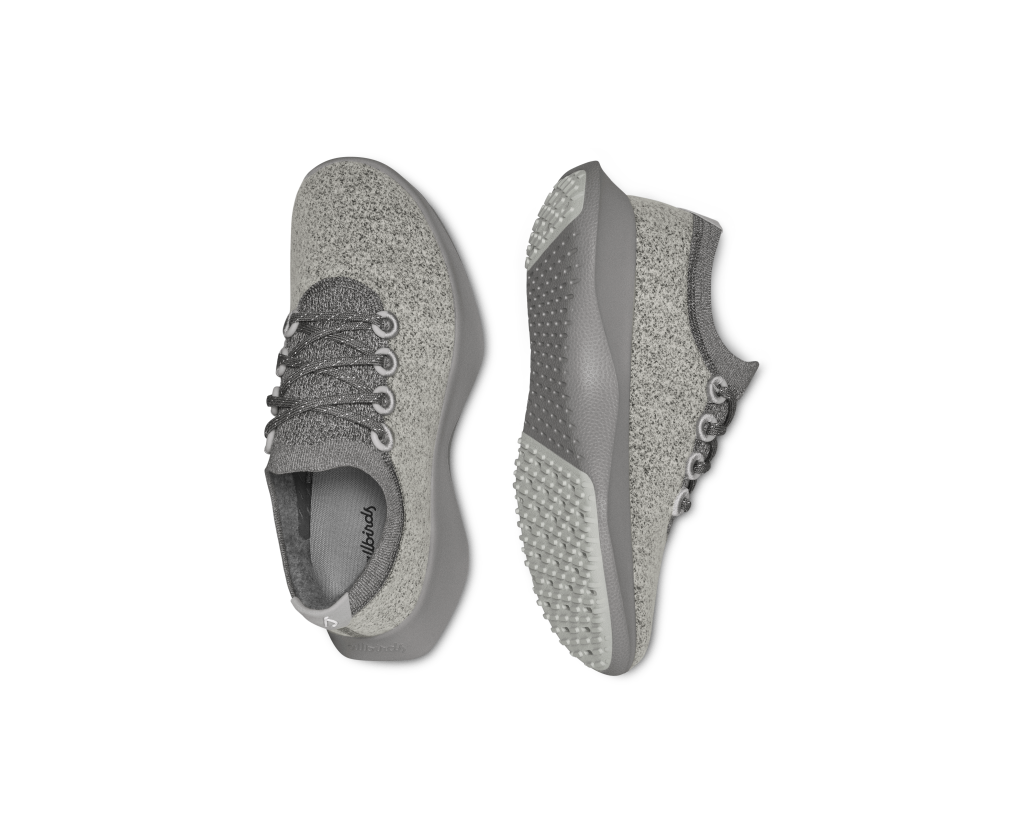 What I Liked About Allbirds’ Wool Dasher Mizzle Running Shoes

Before I even get to the shoe, I have to admit, I love Allbirds’ commitment to the planet. How many big brands do you know that are certified B-corporations? Truthfully (sadly), not many. Likewise, Allbirds makes a point of giving you an idea of how harmful each product is to the environment so you can shop responsibly. Again, even outside of the shoe market, most companies aren’t doing this, so cheers to Allbirds for caring and putting its money where its mouth is.

But, back to running shoes. The Wool Dasher Mizzle is a handsome shoe. I was sent the Meteorite colorway, which is a light gray on gray. Bar none, this is the best-looking running shoe I’ve ever owned. Not that I necessarily need a good-looking running shoe when I’m on mile six, lost in the streets of LA on a cloudy morning, but hey, I’ll take it. It kind of makes you wonder why every other brand is so intent on making dorky-looking shoes, doesn’t it? 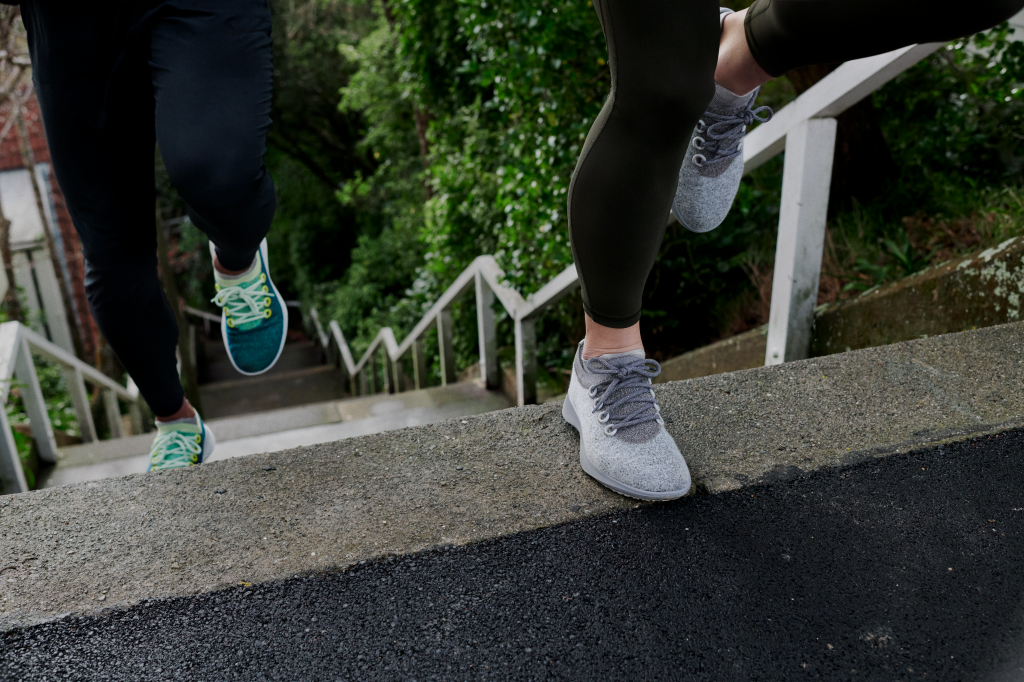 Next, the waterproofing is no gimmick. Unfortunately for Allbirds, I live in Los Angeles. For those just tuning in, it doesn’t rain here. Like at all. The high in LA today was 77 degrees and there wasn’t a cloud in the sky. I should also add that we’re approaching mid-December. So, ya, I couldn’t exactly test these puppies in the rain. However, when I turned on my bath faucet, stuck my hand in my shoe and held it under the spout, I didn’t feel a drop. Not one. It wasn’t until I started moving the shoe around that my fingers got a little wet. A little! Is that the same as running for an hour in the rain? No. But damn if it’s not better than my Brooks.

Finally, let’s talk tread. Jumping in puddles and running through sprinklers is, again, not the same as running in the rain, but I did splash these bad boys around and found very little loss of grip while running. Which, from where I’m sitting, means these can do just fine on a rainy day run. Though I wouldn’t necessarily recommend these as your designated trail running shoes, they could certainly handle more precarious terrain than the Tree Dashers.

While the features are top-notch on the Wool Dasher Mizzles, the bones of the shoes need work for a runner like myself. There were two things that bothered me about this shoe. I’ll start from the top and work my way down.

For starters, the heel collar isn’t great. If you don’t speak running nerd, that’s the opening where you slide your foot into the shoe. Allbirds, like Nike and Adidas’ knit shoes before them, have created a shoe with what we’ll call an “unconstructed upper.” The top part of the shoe is basically a single woven piece which is what makes the shoe extremely light and rather flexible. Generally speaking, this is a good thing. A very good thing. Every extra ounce of weight on your shoe is something extra you have to carry with every step. So in this case, the less, the merrier. However, with a lot of these unconstructed shoes, there isn’t that support to actually keep your foot in the shoe. This was the case for me. 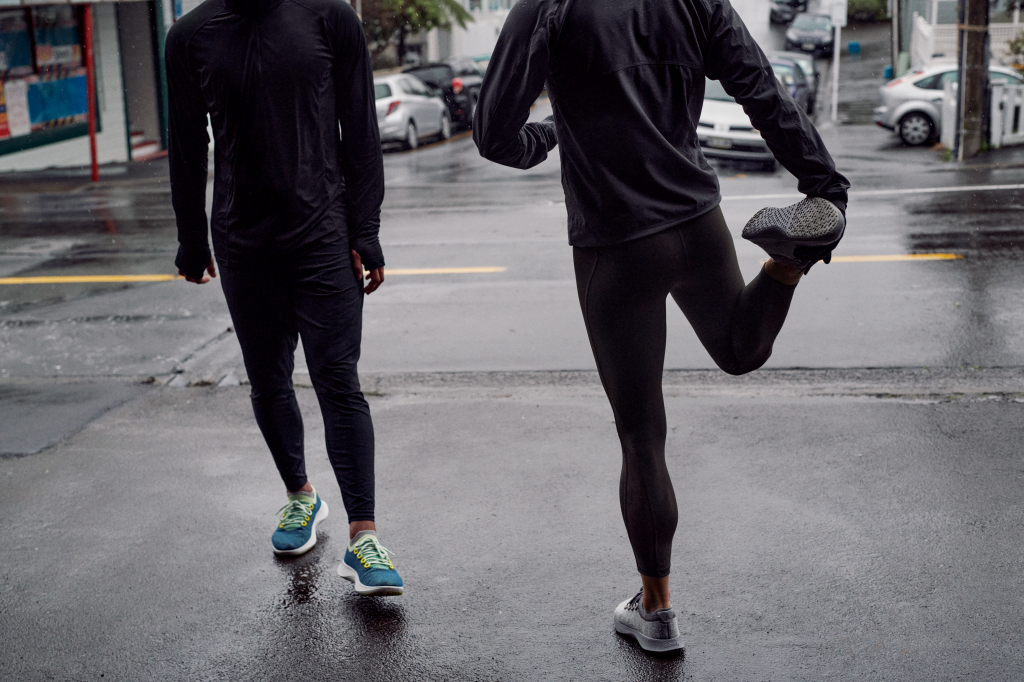 Constantly throughout my runs, I felt that if I pushed off from the ground too hard, I’d slip right out of the shoe. Now, if you’re going for a leisurely jog or a walk, that’s no biggie. And in fact, while walking, I didn’t notice it at all. But, while I’m way past my sub-16 5k days, I’ve still got some wheels on me. And when I tried to really push it, I felt myself slipping out. With a bit more structure around the heel collar, this could easily be remedied. But, alas, no matter how tightly I tied my laces, I kept almost slipping out. That means these shoes are likely better for casual rather than competitive runners.

Next, the sole. The soles on these shoes are too stiff. That’s great for responsiveness but it ends up wrecking your knees. Compared to my Brooks trainers, I could feel the concrete in ways that a distant runner shouldn’t feel concrete. You can see from the photos there is a good amount of foam on these shoes. However, since the foam is so stiff, shock doesn’t dissipate as much as it would with a softer sole. Ultimately, it’s a trade-off. Cushier foam is less responsive, stiffer foam less protective. Let me put it another way, Nike put a carbon fiber plate into their world record-shattering shoes because running on marshmallows won’t snag you a gold medal. Capiche?

If you’re busting the casual two, three or four-miler here and there, I don’t think you’ll care much. However, if you’re a distance runner (like me) and double-digit runs are a regular thing, you’re going to feel it with these. The foam doesn’t absorb as much shock as your standard pair of trainers.

The Verdict: Stylish, Eco-Friendly Running Shoes That Leave Something To Be Desired

As I mentioned initially, your take on these shoes depends on who you are as a runner. If you’re the type to knock out an occasional two or three-miler once or twice a week, give these a try. They’re sleek, light and can handle weather. They grip the ground well and they’re fast. You could even race in them if you wanted to. And, best of all, Allbirds is doing great things for the environment and setting a standard for businesses everywhere.

However, if you’re a distance runner looking for your next trainer, skip these, they’re not for you. Between the slipping heel collar and stiff foam, these shoes cannot handle heavy milage.

So where does this leave me? For walks and short, fast runs, I’ll reach for my Allbirds. For everything else? My feet will stay firmly planted in camp Brooks. 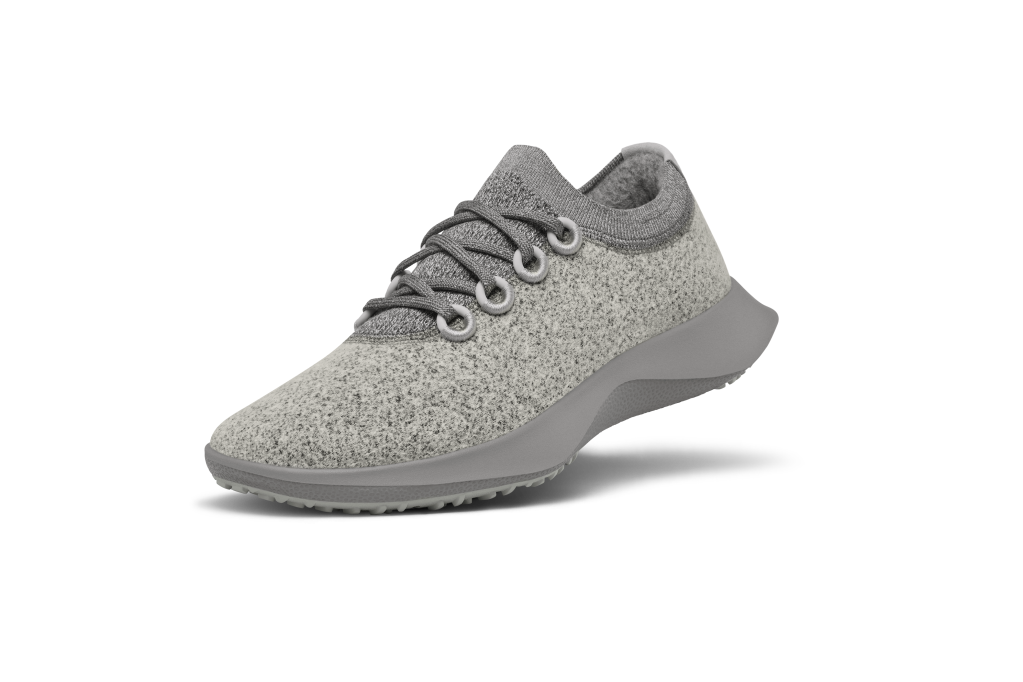