Summer doesn’t officially start for another couple of weeks, but we’re already well into the swing of the outdoor season. Cookouts (socially distanced, of course), yard work, hanging by the fire pit, they all have one thing in common: they leave you wide open to mosquito attacks.

They may not be the malaria-ridden bringers of death they are in other countries, but our North American mosquitos are incredibly annoying and are able to ruin an outdoor gathering simply through their incessant buzzing and feasting.

And this summer could be an especially bad one for mosquitos through vast swaths of the U.S., as spring rainfalls have been above average in 19 states. Mosquitos breed and thrive in wet conditions and especially stagnant standing water, like what’s left behind after a rainy season. It only takes 10-14 days for a generation of mosquitos to be born, so rainy springs often mean a summer full of skeeters. 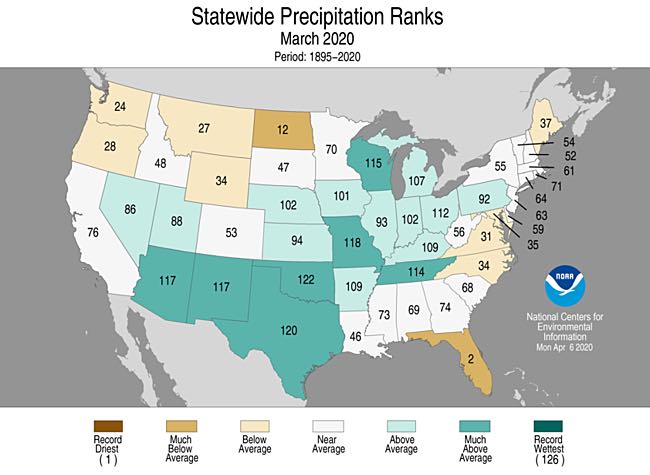 Thankfully there is an entire industry devoted solely to backyard mosquito control. Some solutions are of course better than others, but there is a lot to consider in what you deploy to free your yard of those little savages. How effective, how durable, how to apply, how toxic, how expensive — all questions that need answering before you choose your weapons in this ceaseless war for the right to enjoy the great outdoors without being buzzed and itched into insanity.

If you want to learn how to get rid of mosquitos for good, read on!

It’s hard to find a good portable anti-mosquito device. Most require an electrical outlet, and if you have a decent-sized yard and you want to set up your grill or fire pit away from the house, you’re going to need a ton of extension cords. And that’s a hassle. In the past couple of years, though, small butane-fueled repellers have been gaining in popularity. They all work more or less the same way: a butane cartridge emits a slow and safe low-heat burn, which heats a pad infused with a mosquito repellant. As the pad heats and releases the repellant, the biters stay away. Some of these promise huge fields of coverage, but we’ve found it best to keep it simple: get one that gives you a 15-foot no-fly zone (or get two since they’re very inexpensive), and one that’s also easy to buy refills of butane and repellant pads for. They make no sound, emit no odors, the pads are almost always DEET-free, and they effectively keep a small seating area mosquito-free.

Mosquitos are attracted to smells people don’t necessarily like — sweat, swampy water, compost. So it’s not surprising that some of the aromas we find pleasing repel them. Many natural oils and herbs like rosemary, peppermint, citronella, lemongrass and cedarwood provide very effective and chemical-free barriers to mosquitos, with the added side effect of being nice smells for us to be around. A great way to make those smells last longer and more effectively is in incense sticks. The ingredients are concentrated, and the sticks can burn for hours, with the wafting smoke keeping the bugs at bay without overpowering you. They’re also extremely cost-effective when it comes to backyard mosquito control. 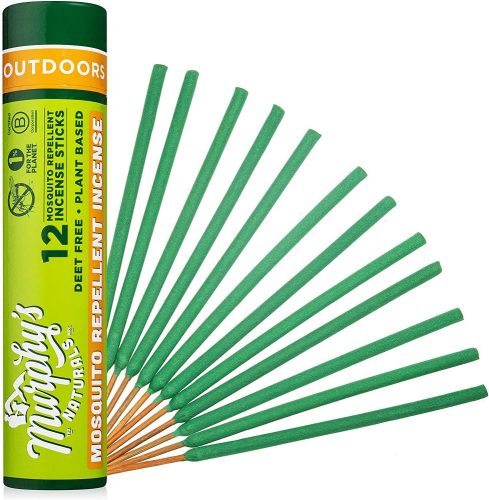 Torches are an old-school option for keeping the mosquitos away. But they used to burn something called punk, which was questionably effective at best. (Although if you want to try, you can still find it.) Today’s torches are fueled with citronella and cedar, which work better in terms of repelling bugs. Plus the torches are a great visual touch for a nighttime gathering. You can buy the big ones, or smaller tabletop versions. Either way, they burn through the oil slowly, the larger smoke and smell field gives you a larger bug-free zone than the incense sticks, and what little smell you can detect from them is pleasant and mild. 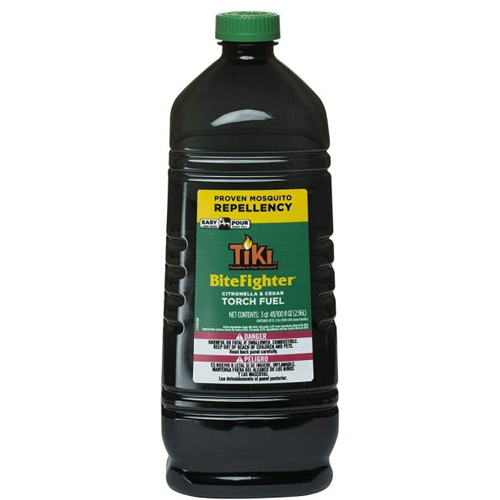 If you’re of a certain age, you remember warm summer nights sitting by the strange blue light of the bug zapper, waiting for one of the really big moths to wander into the cage and bzzzzzzzt — up in smoke! Ah, memories. You can probably still find one of those Jurassic zappers, but they were enormous and heavy and probably devastated your power bill. But Ol’ Sparky lives on today in the form of smaller, more efficient, safer and easier-to-clean versions.

The concept is the same — mosquitos and other flying pests are drawn to the light and heat, wander too closely, and get 4,000 volts of deadly charge for their curiosity. Unlike the old ones which got positively gross after too many nights frying insects, the new ones are easy to clean. And while they are most definitely not toys, they’re far safer than their ancestors. Many of them are now tabletop models to save you the trouble of hanging them, while still providing 1,500 square feet of defense.

Like we said, mosquitos live and breed in still water. Eggs hatch into nymphs, which swim around for about a week until they mature into full-fledged flying bloodsuckers. In ponds or other bodies of water where fish live, the populations are kept lower by fish, which feast on the nymphs. But it’s those still, stagnant waters where they really thrive, and that’s exactly where you should hit them before they take flight and come for you. Some of these products called “mosquito dunks” vary in toxicity, which is a real concern if you have small kids or pets who go near those wet areas. Look for environmentally sound versions that use BTI (Bacillus thuringiensis israelensis), a bacteria which produces toxins that kill mosquito larvae with little to no effect on other organisms. These are usually certified by the EPA, so you can wipe out those eggs and nymphs without fear. 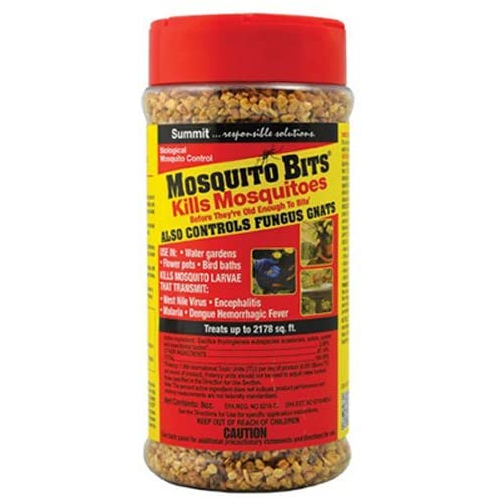 We get it, sometimes you just want to be sure. Spending one night too many being a living all-you-can-eat buffet for clouds of bloodthirsty mosquitos and you just want them gone. If you just want to learn how to get rid of mosquitos and don’t necessarily care how, we suggest you reach for one of the long-lasting sprays, which come in concentrate form which you dilute in a large-capacity pump sprayer, or in the more-convenient hose-end sprayers. Powered by chemicals, these kill the mosquitos and other pests that are in range of the spray and then repel others from taking their place for weeks on end. One 32-ounce container covers up to 5,000 square feet for four weeks. Are they effective? Yes, extremely so. Should you be worried about the chemicals used, like lambda-cyhalothrin and others? That’s for you to decide. 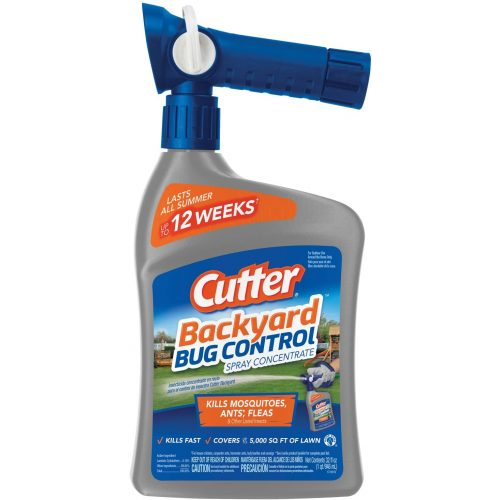 It’s the same concept as above: large-scale spraying kills insects exposed to the spray and repels ones from coming back. But instead of chemicals, there are versions powered by ingredients like cedarwood oil, which are harmless to people and pets. Cedar oil affects octopamine, which is essential to life for pheromone-driven pests as it is responsible for regulating heart rate, movement and behavior. Cedar oil blocks the octopamine neurotransmitter receptors in these bugs, causing them to be repelled from the area. When contacted, pests suffocate and die. But mammals, fish, birds, and amphibians are unaffected. Are these versions as effective as the chemical-driven ones? No, but they’re only marginally less so. Are they more expensive? Yes, by measures. It all depends on how green you want to be and how you want to go about your backyard mosquito control. 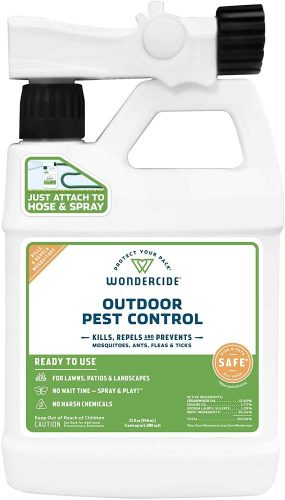