If you’ve ever been interested in firearms or shooting-based sports, then you’ve definitely wondered about airsoft. There’s a reason airsoft videos are all the rage on TikTok.

As you can see in the video, which looks like a damn first-person shooter video game, airsoft offers players the thrill of combat and realistic weapons without all the danger.

If you’re curious to learn more about airsoft or are thinking about buying an airsoft gun, we’ve prepared this beginner-friendly guide. We’ll go through the basics of airsoft guns, including how they work, what kinds of airsoft guns exist and whether or not they’re legal (they mostly are). Then we’ll tell you about some of the best airsoft guns to consider and the equipment you need to have to compete and shoot safely.

What Is Airsoft? What Are Airsoft Guns?

Airsoft is a team combat game people play using airsoft guns. It’s basically like any team combat game, like laser tag, except it uses airsoft guns instead of other weapons. The airsoft guns themselves are high-fidelity plastic, and sometimes metal, replicas of guns that fire plastic pellets/BBs. To be clear, these are not the same metal BBs of a BB gun, which are suitable for some kinds of hunting.

How Do Airsoft Guns Work? What Kinds/Styles of Guns and Ammunition Do I Need?

Airsoft guns seek to resemble real firearms as much as possible, so there are as many varieties of airsoft guns as there are actual guns.

That being said, there are generally three categories:

In terms of how airsoft guns operate, there are basically three different ways to power them. Their names pretty much tell you everything you need to know.

Of course, there are plenty of airsoft guns that don’t fall neatly into these descriptions, but these cover most options.

Ammunition is probably the easiest thing because most airsoft BBs come in the same size, little 6-millimeter pellets. The differences come through in other qualities like weight and biodegradability.

The most popular weights are 0.12 grams, 0.20 grams and 0.25 grams. Because the pellets are all the same size and shape, most airsoft guns can comfortably fire all three of these weights. There are pros and cons to each: Heavier pellets require more power to fire and can hurt more at higher speeds; lighter pellets require less power to fire but lose accuracy over distance. So there’s no best airsoft pellet; it depends on your gun and shooting situation, whether targets in your backyard or an arena game.

When used properly and with the right equipment, airsoft guns are perfectly safe, if not harmless. The max speed of the most powerful airsoft guns falls somewhere around 500 feet per second. Scientifically speaking, that is fast enough to break the skin but not fast enough to cause any kind of serious or long-lasting damage, assuming it hasn’t struck a sensitive area like the eye. Many airsoft guns offer projectile speeds well below that too, so as long as you’re wearing even the basic equipment, most importantly eye and ear protection but also long-sleeves and tactical pants, you won’t have to worry about getting injured from being shot by an airsoft gun.

In terms of the legality of airsoft guns, they are legal in most U.S. states, as long as they meet the federal law about having orange tips, according to top airsoft retailer Airsoft Station. Airsoft guns are only outright illegal in Arkansas. They’re either wholly legal in the rest of the states or are subject to basic restrictions, like buyers being over the age of 18, not wielding the gun in a menacing manner, applying particular colors to make the gun appear less real or simply not using the guns in certain places.

So for the most part, if you’re over 18 and want an airsoft gun, you’ll be able to buy it and use it with minimal legal concerns, at least on your own property. You do always want to check your individual state’s and city’s restrictions before purchasing. There may also be commerce restrictions that prohibit you from purchasing an airsoft gun online, even if it’s legal to possess.

Now that we’ve covered all the basics, let’s run through some of the best airsoft guns and necessary safety equipment. If you’ve ever played paintball, you already know how fun airsoft can be, and if you’ve never dabbled in either until now, an extremely fun world of pretend combat and target practice awaits.

For just a little target practice and backyard fun, the GameFace Recon Airsoft Gun is a low-risk, high-reward airsoft gun. It’s a single-shot, spring-powered airsoft pistol — rated for a velocity up to 280 feet per second — that basically resembles your average black handgun. It’s cheap and reliable for short-distance accuracy, if not suitable for matches that require rapid-fire. 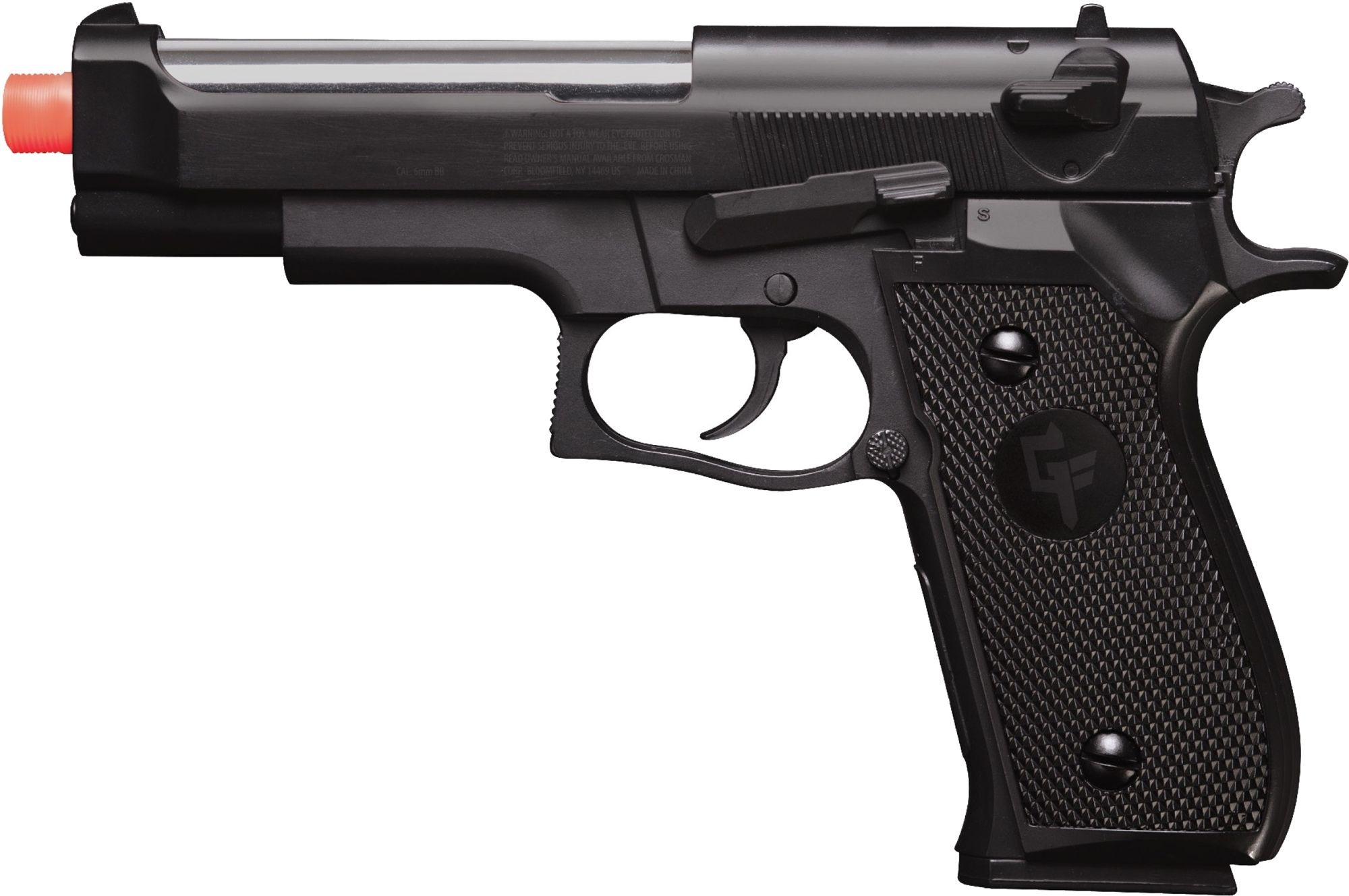 For a cheap starter rifle, go for the UKARMS P48 Tactical AK-47 Spring Rifle. It’ll give you the feel for holding an extremely common automatic weapon while still giving you the ease of use of spring power. It also comes with a flashlight and laser sight, so it’s great for practicing on your own before upgrading to something battle-ready. 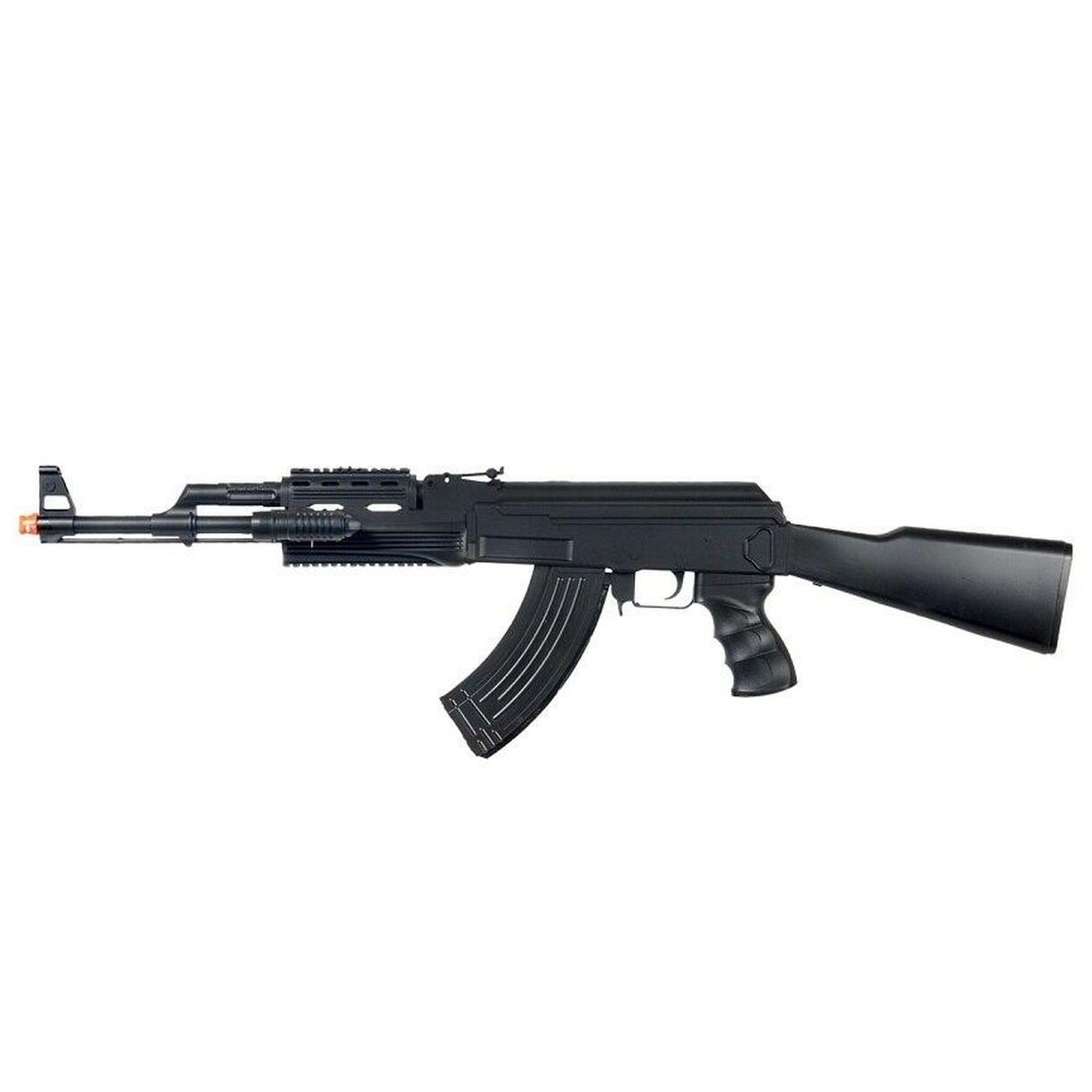 Who doesn’t love the pump action of a shotgun? The Spring-Powered P1788 Airsoft Shotgun gives you all the basics for a great starter shotgun at a reasonable price. 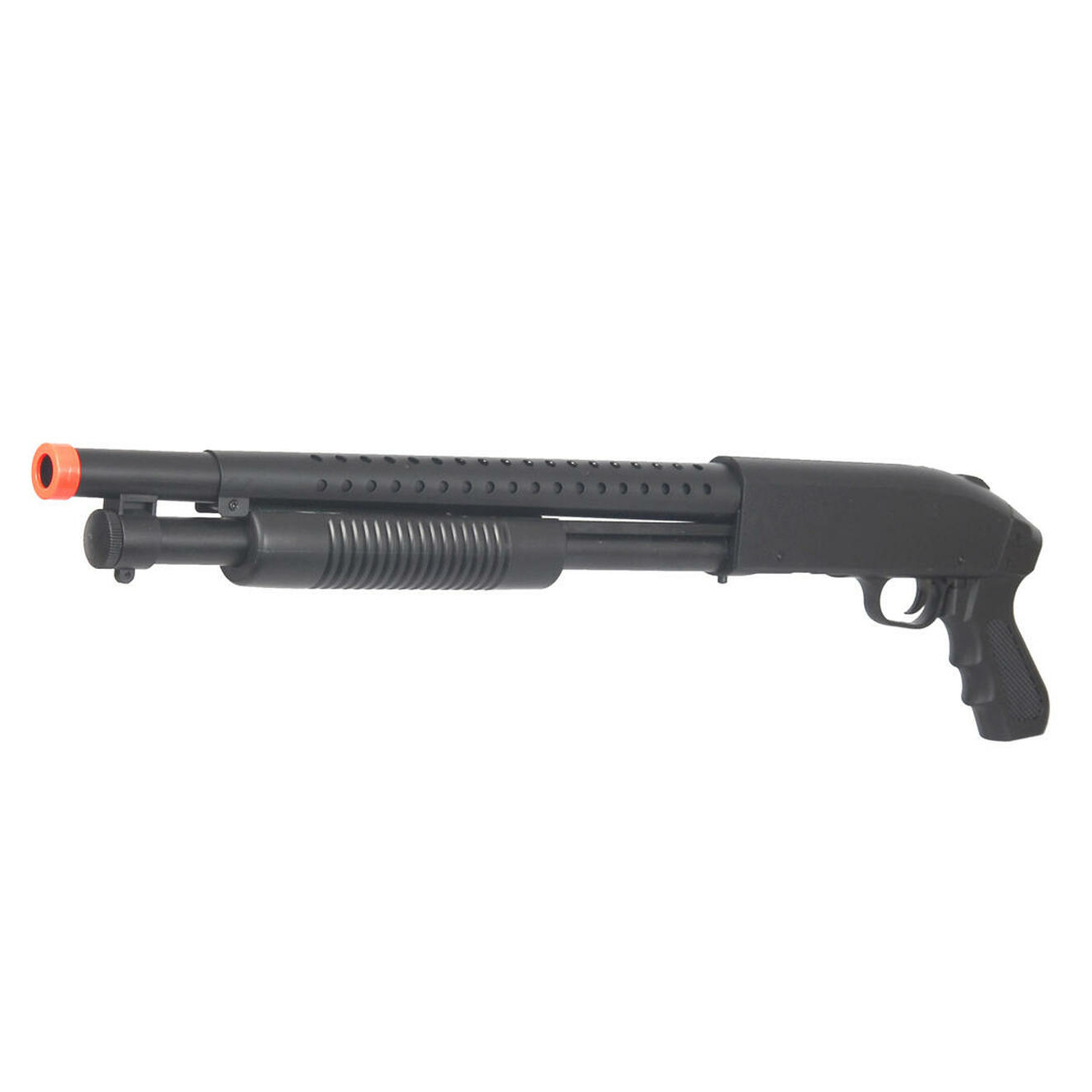 Once you’re comfortable with spring-powered airsoft guns, electric-powered weapons are the next step.

The Umarex Beretta 92FS Electric Airsoft Pistol is a licensed replica of the real gun and offers semi-automatic firing with a 16-round magazine, electric blowback and a shot velocity of 150 feet per second with 0.12 gram BBs. 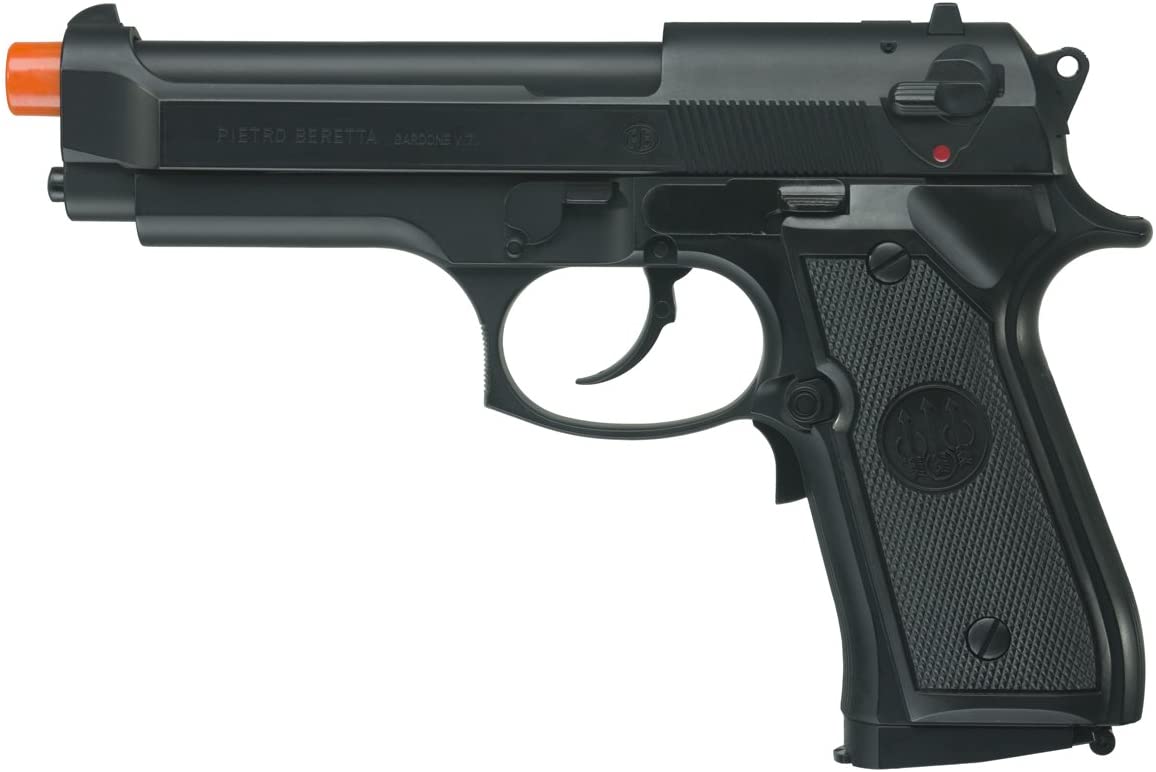 The Lancer Tactical AK-47 AEG Airsoft Rifle is fully automatic and the kind of airsoft gun starting to bridge the gap between airsoft and firearm. It features a full metal gearbox and internals, a velocity of 380 feet per second when shooting 0.20 gram BBs and an automatic firing rate of 660 BBs per minute. Toss in a rechargeable battery and a 600-round magazine and you’ve got one heck of a weapon for target practice or high-speed combat. 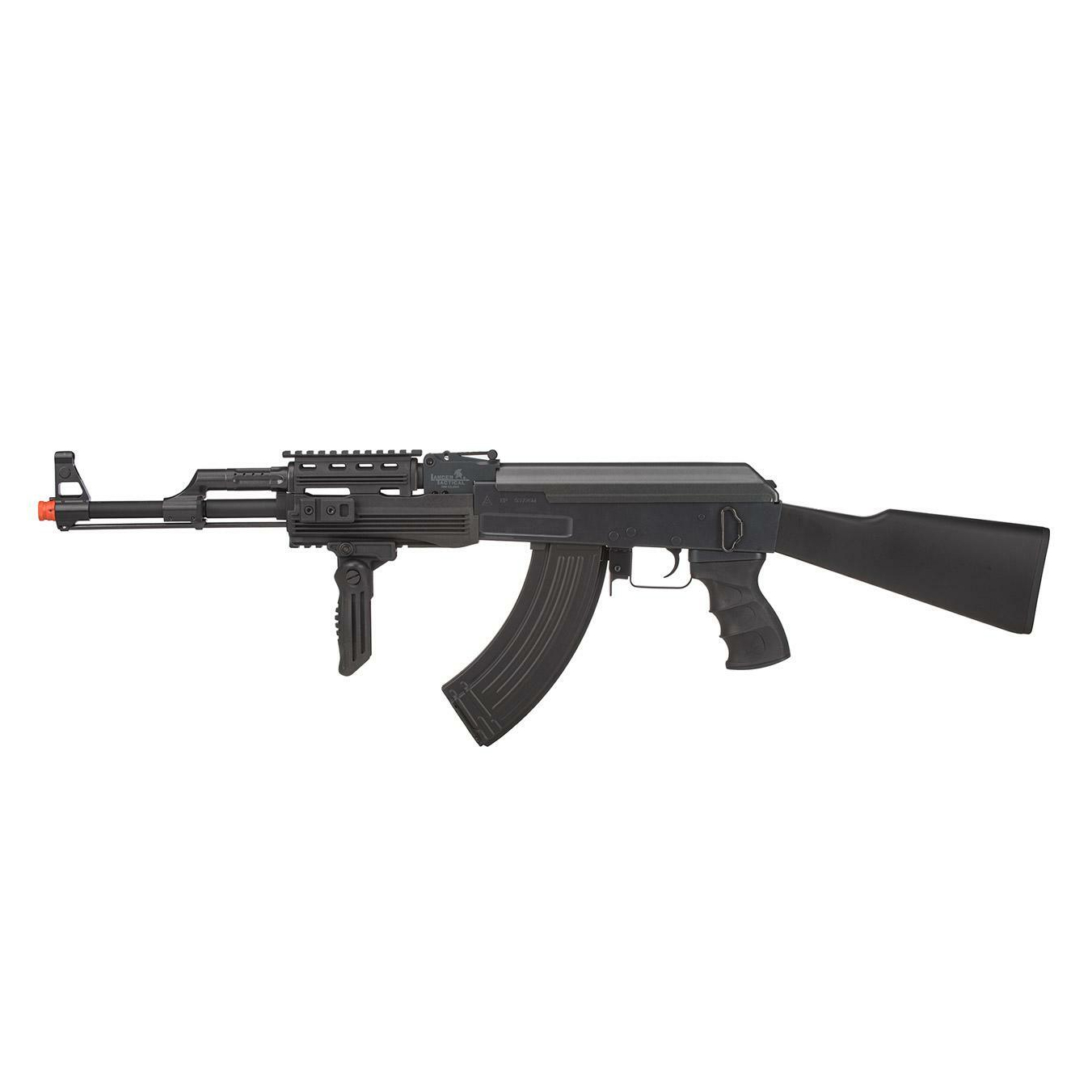 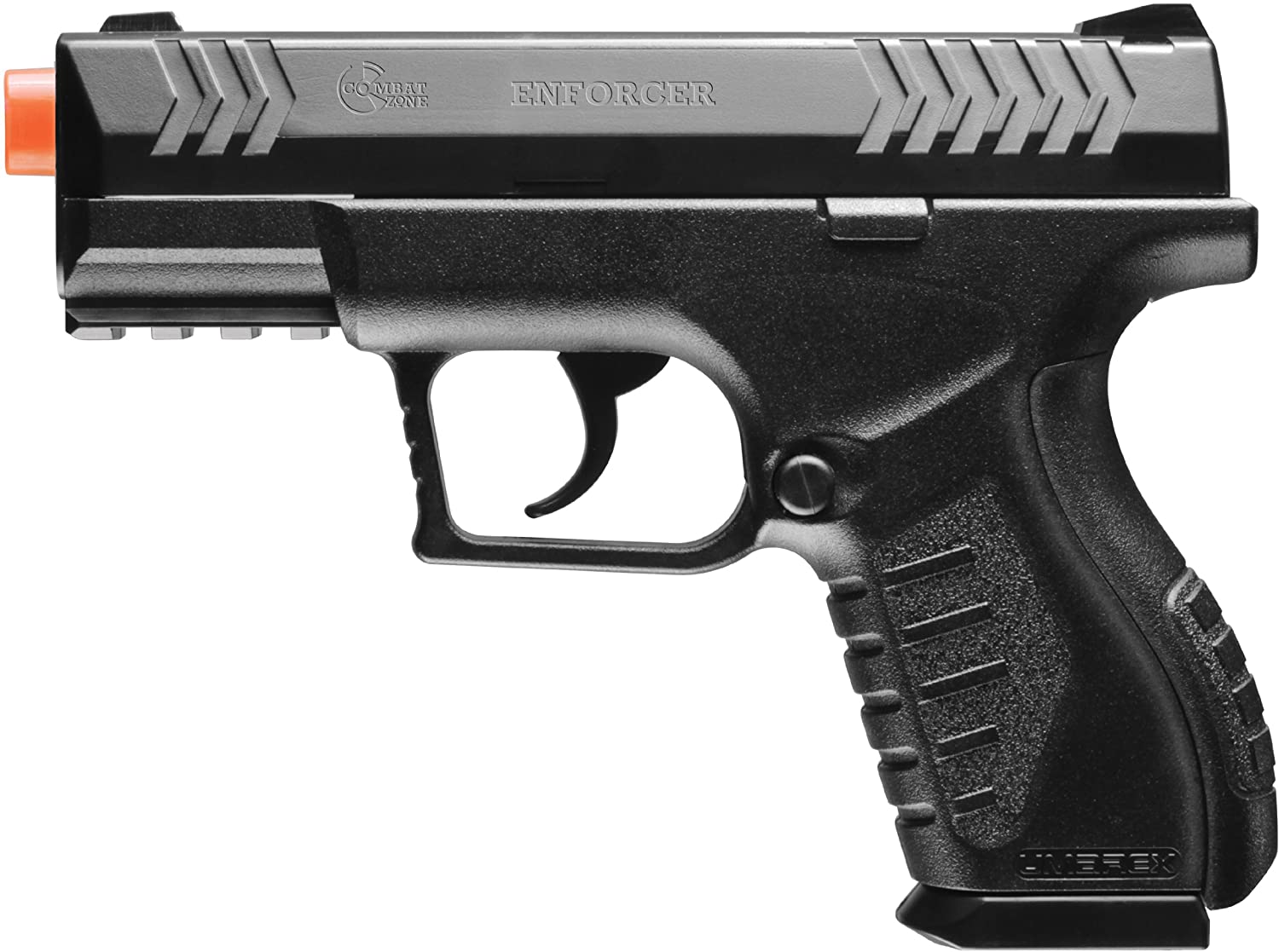 For a realistic high-velocity, rapid-fire airsoft rifle, go for the Golden Eagle Elite Series 7-Inch Keymod CQB Gas Blowback Airsoft Rifle. Powered by green gas / propane, this semi-automatic / fully automatic airsoft gun fires at 380 feet per second with 0.20-gram pellets from a 30-round cartridge. Made with metal internals and a plastic exterior, this gun is durable but less expensive than full metal alternatives for a high-speed, reliable, combat-ready gun that doesn’t totally break the bank. 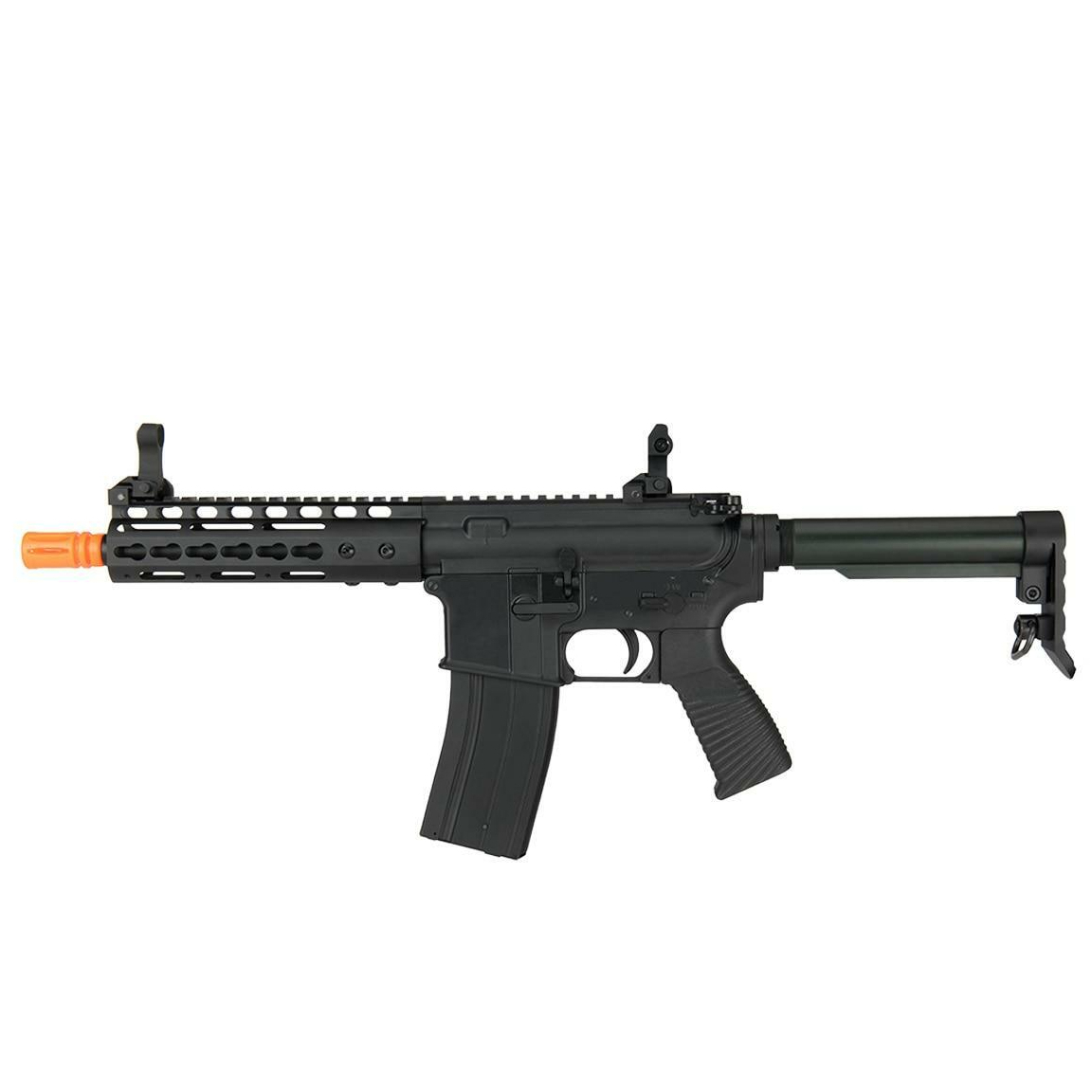 If you just want to fire something that feels realistic and high-quality without dropping a Benjamin, go for the Dan Wesson 8-Inch CO2 Airsoft Revolver. Powered by CO2, this airsoft pistol looks, feels and fires like the real deal, offering high-velocity accurate shots and a realistic semi-automatic firing system. You can never go wrong with a classic revolver for practice, plus, you’ll feel pretty awesome if you manage to tag someone with this during a game. For the best experience, you might choose pellets on the heavier side, such as 0.25-gram or 0.30-gram pellets. 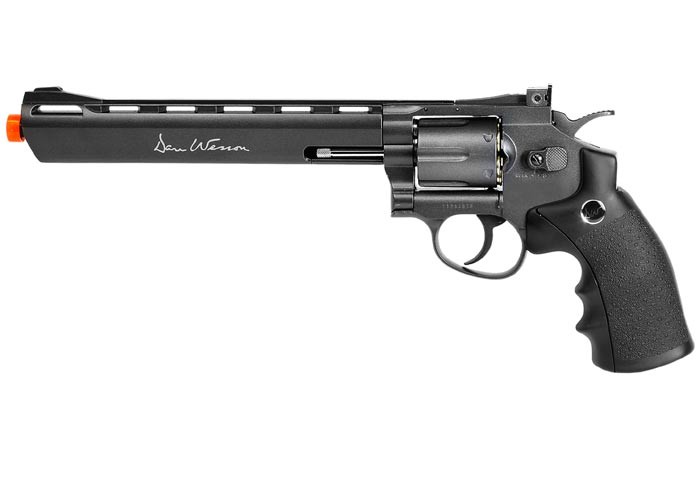 Though you can buy non-biodegradable BBs, you’re doing a disservice to the environment and yourself since you’ll be the one cleaning up the BBs in your backyard. (Plus, some arenas only allow biodegradable BBs.) The Tactical Force Biodegradable Airsoft BBs are perfect for any of the weapons above. They weigh 0.20 grams for accurate firing, come in the standard 6 millimeters so they can be used in most weapons and you get 10,000 pellets, which should be plenty to get you started. 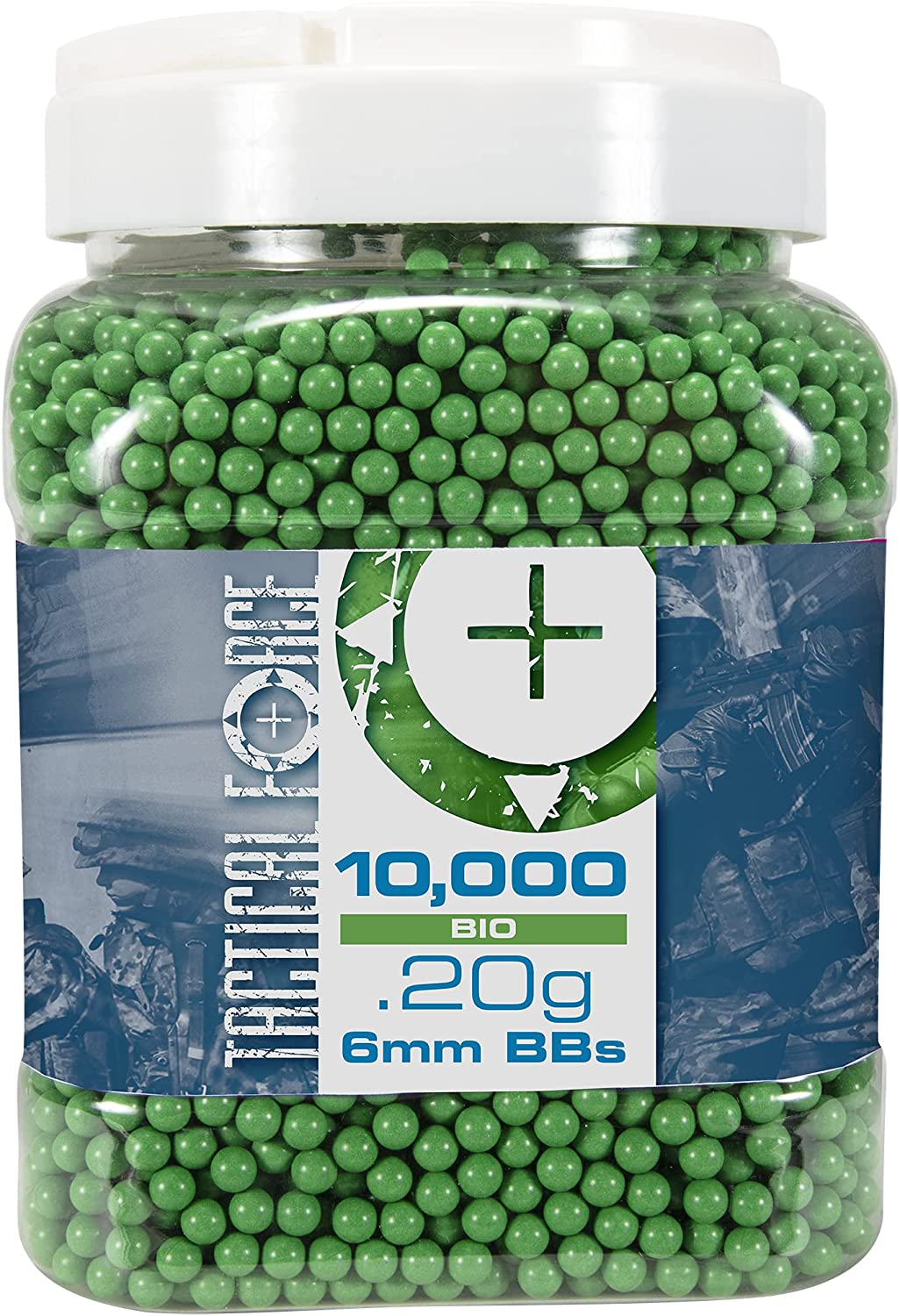 The Yzpacc Airsoft Mask and Goggles offer the two essential safety items you need in one cheap package. You get a steel-nylon mesh mask that covers your mouth, nose and ears as well as ABS plastic goggles to protect your eyes. Lots of people wear body armor, more elaborate headgear and other kinds of protection, but this is the bare minimum to ensure you won’t leave the arena with any permanent damage. 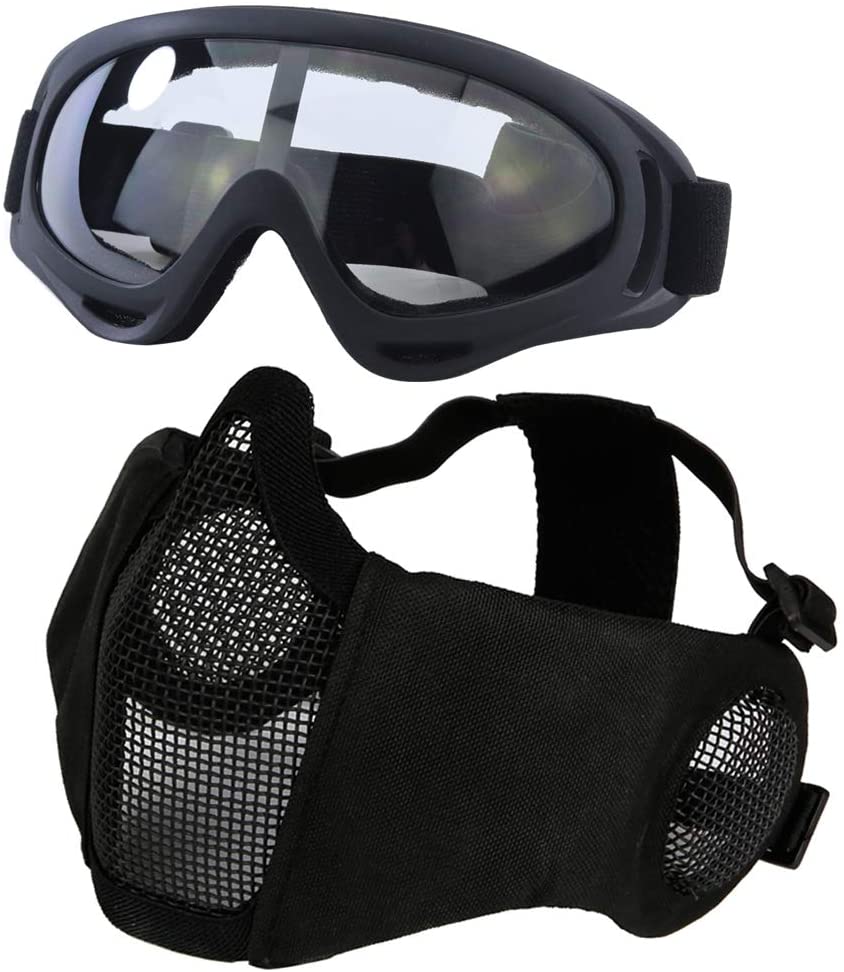 Nothing feels like a bigger waste of time than having to collect errant BBs from your backyard. Save some time and get some practice in with the Atflbox BB Gun Trap. It’s basically a cardboard box target that comes with sheets of target paper. When you hit the target, instead of your BB flying through into the woods or a neighboring yard, it gets caught in the trap instead. After all, who doesn’t want to save time and money by collecting and reusing their BBs? 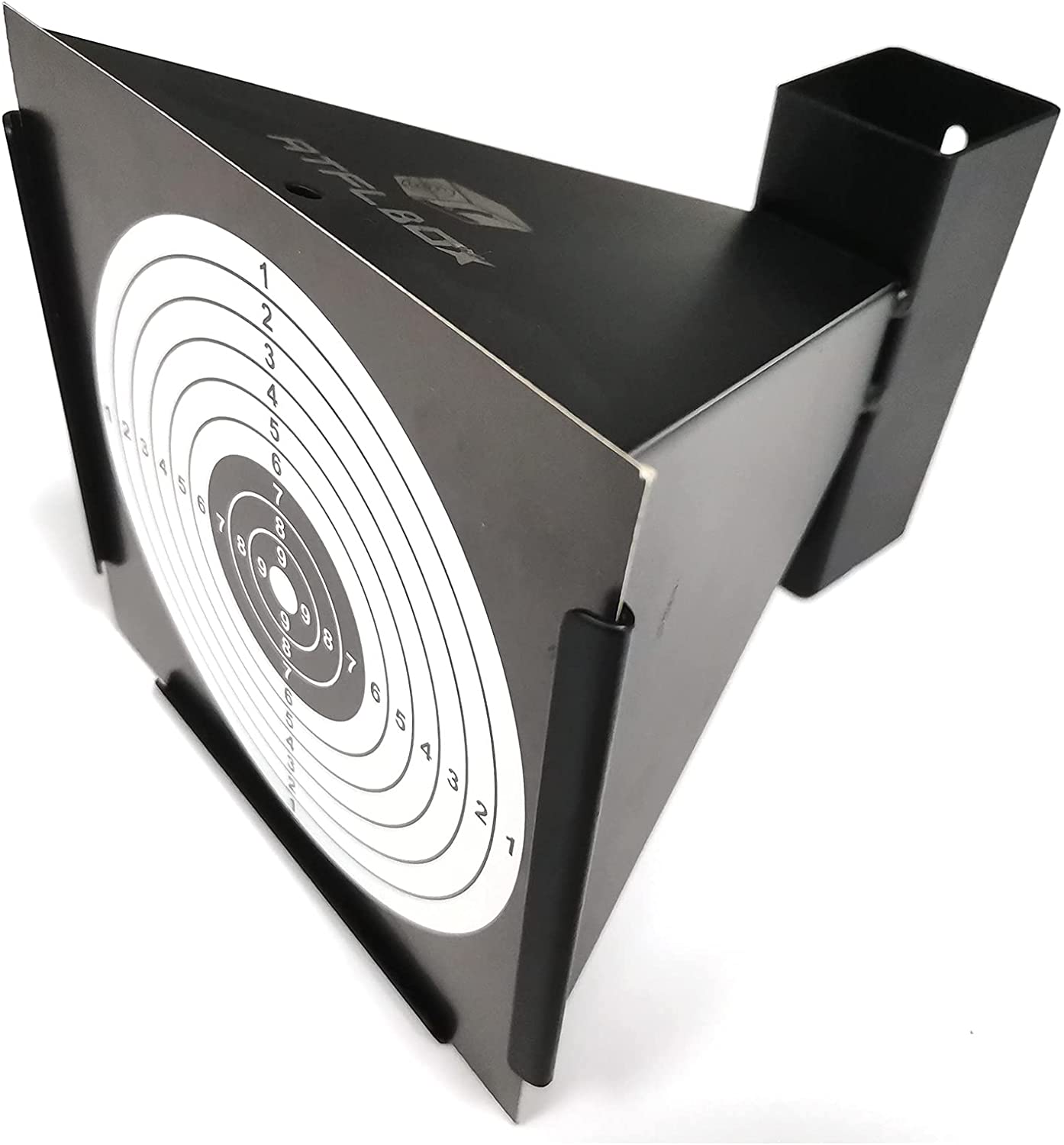