Flashlights are an essential part of any everyday carry kit. Although most people already carry a light built into their smartphones, these lights are not as powerful as the best EDC flashlights.

The most common uses for flashlights are power outages and outdoor adventures. But EDC flashlights also offer a helping hand in scenarios like commuting home from work in the dark, searching for your phone under the car seat or even walking to the bathroom in the middle of the night (without waking your partner). Although a phone flashlight might suffice for some of these, a real EDC flashlight offers far more light, won’t break as easily and doesn’t depend on having a charged phone.

A flashlight is a key part of an EDC kit, but the exact design that is right for you depends on how, where and when you expect to use it. Although the best EDC flashlights are adaptable to a number of different situations, it’s worth considering the following elements:

If you’re looking to elevate your EDC kit with a quality flashlight or upgrade your current device, read on. We’ve rounded up the best EDC flashlights, including simple solutions for urban commuting, rugged options for camping and premium picks for the serious adventurer.

For most people, this Stylus Pro Penlight from Streamlight is all they’ll need in an EDC flashlight. It boasts a streamlined design that’s equally durable and elegant, a respectable light and eight hours of running battery life. As the name suggests, the torch is about the size of a pen (5.3 inches long). All these features strike the perfect balance between convenience and capability, meaning it’s easy to carry but it can still perform reliably in case of an emergency. And we’re not the only ones who like this PenLight; it boasts over 9,000 reviews and 4.6/5 stars on Amazon. 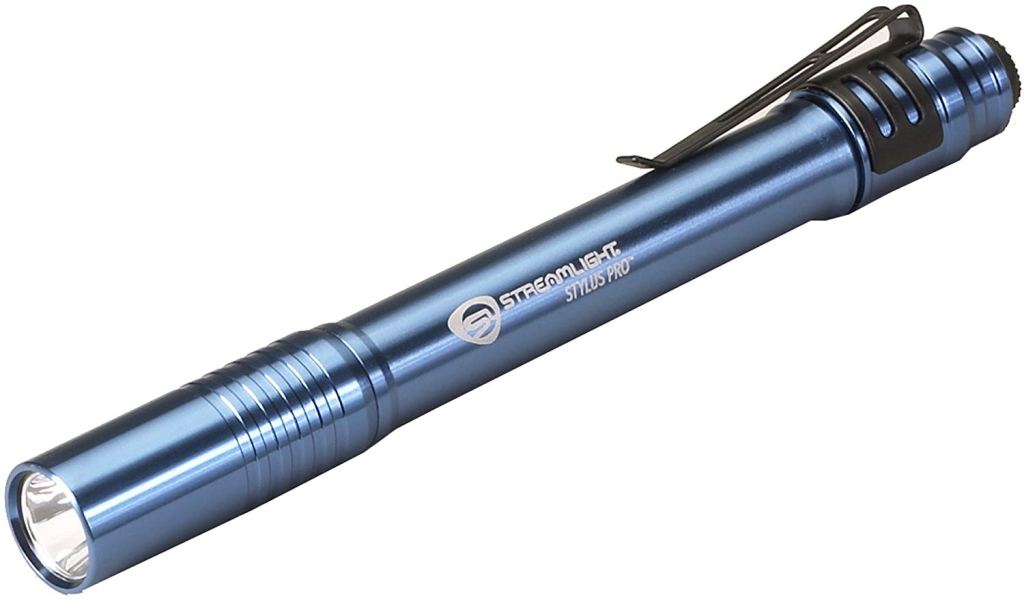 EDC flashlights aren’t the most expensive part of your kit, but you can still save a few bucks by opting for this super-affordable flashlight from Hatori. The incredibly small light comes in at just $8 but doesn’t sacrifice too much quality for the low price tag. It measures 3.55 inches long, making it small enough for even the most crowded pocket. It’s great if you’re unsure about carrying a flashlight as you don’t have to commit too much money or space in your EDC. 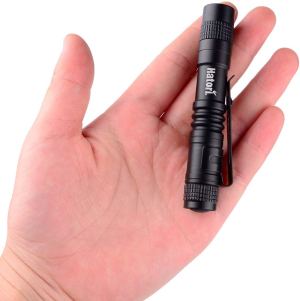 With its sturdy construction, strong beam and impressive waterproofing, it’s little wonder the Energizer Mini Flashlight is such a popular EDC flashlight choice. This IPX4-rated flashlight can withstand drops from up to two stories high, while the device’s vertical orientation makes it ideal for pocket mounting, belt mounting or for upright holding during manual tasks, like car work, DIY or running. Additionally, the flashlight is supplied with a single AA battery, meaning the 75-lumen light is ready to go right out of the box. 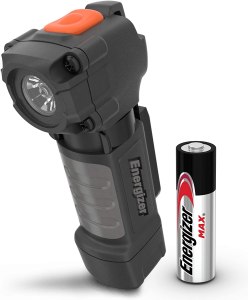 Wearing the Lighting EVER Headlamp on your head frees up your hands for performing two-handed tasks with greater ease. The thick, elastic straps are highly adjustable, allowing them to suit head sizes from child to adult. The headlamp offers three levels of brightness as well as a setting that flashes red for emergency situations. The lamp unit itself is tiltable up to 90 degrees to best suit the task being performed. 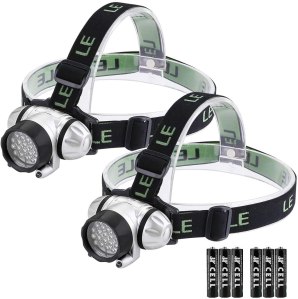 If you’re hiking and running at dawn or dusk and need some light on the trail, pick up this handy tactical flashlight from Nicron. It features a swiveling head that allows you to clip the light to your backpack. The torch also has a magnet on the back that allows you to work hands-free on your car, at the campsite or even at a desk. You also get a serious upgrade in terms of brightness thanks to 600 lumens of light. All this comes with a price tag of $17, making it very affordable considering all the features. 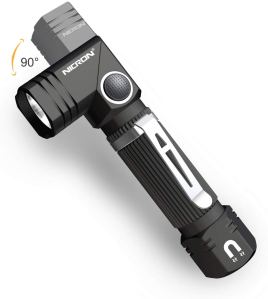 This high-lumen EDC flashlight is capable of illuminating objects up to 1000 feet away. The GearLight LED Tactical Flashlight S1000 is a durable and dependable addition to any EDC kit. Measuring 6.1 by 1.5 by 1.5 inches and weighing 5.1 ounces, it’s heavier than most EDC flashlights. However, this gadget is water and shock-resistant as well as virtually indestructible. It is powered by three AAA batteries, which deliver up to ten hours of light on the flashlight’s lowest setting. The GearLight LED Tactical Flashlight S1000 is one of the most popular EDC flashlights in the world with nearly 40,000 reviews on Amazon. It’s also regularly out of stock, so it may be wise to order it sooner rather than later. 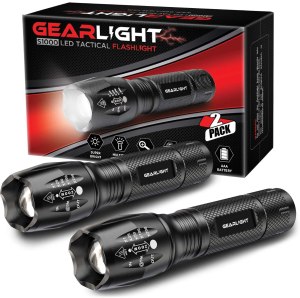 Solar power is one of the most eco-friendly ways to power your flashlight. The handle of the Delxo Solar Powered Flashlight is covered in panels that absorb solar energy and store it for later use. A USB charging port is also integrated as a backup option if sunlight is in short supply. Once fully charged, either by USB or solar, the battery lasts up to ten hours. There are three different lighting modes to choose from and six different kinds of available light, including red and blue strobe. 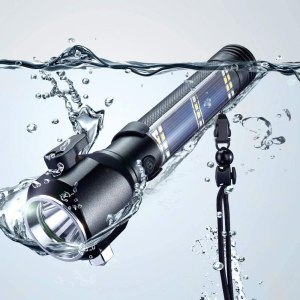 If this isn’t your first EDC flashlight, or you’re looking to upgrade your entry-level torch, go for this Microstream from Streamlight. It’s nicer than most EDC lights, but still reasonably priced at $30. The real upgrade is 250 lumens of powerful, wide-spread light and a more durable construction. Reviewers say the battery life is incredible and the super-bright light comes in very handy on a regular basis. 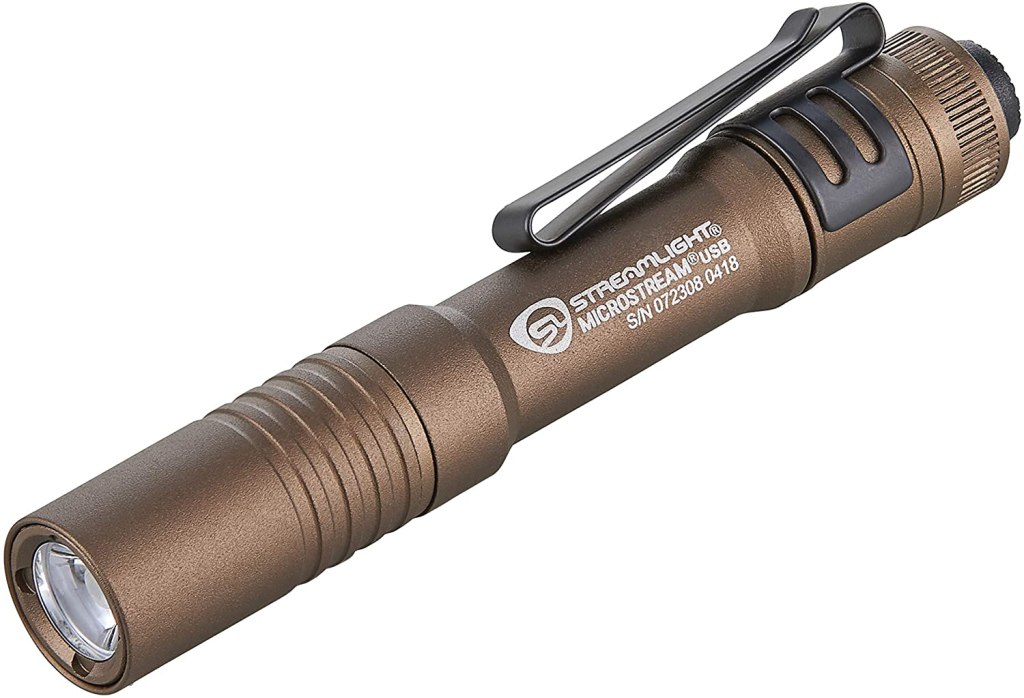 In need of a handy camping flashlight? There’s no need to get a bulky torch — just grab one (or a few) of these Streamlight ProTacs. They’re another step up in terms of luminous capability and durability. Most of the previous flashlights on this list are fine with rain, but they might stop working if dropped in a creek or deep puddle. Not this flashlight. It can be submerged or dropped without a problem. Plus, if you have a problem out in the woods at night, the ProTac will run for 24 hours so you can find your way out or fix. 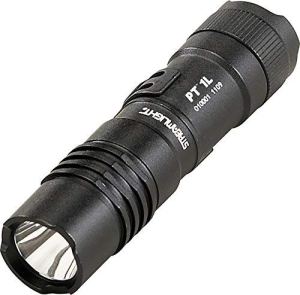 This tiny flashlight from Nitefox is small enough to clip on your keychain and completely forget it until you need it. It’s 1.3 inches long and weighs next to nothing. Obviously, it’s not the brightest EDC flashlight, but it’ll be an upgrade over your phone’s flash. We recommend it for city dwellers who don’t need a light as often. The flashlight also comes with a few extra batteries, so you won’t have to worry about tracking down the special mini batteries on Amazon for a while. 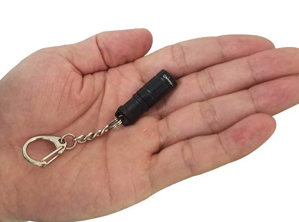 We wouldn’t recommend dunking the LUMINTOP Tool EDC Flashlight in water intentionally, even though it is waterproof up to six feet. It sports a slick, black design, is impact resistant up to heights of 1.5 meters and has a maximum run time of up to 60 hours. Additionally, there are five lighting modes to choose from. Unsurprisingly, the lowest setting uses the least power and helps to prolong battery life, while the high and turbo settings shine the brightest for greater illumination. 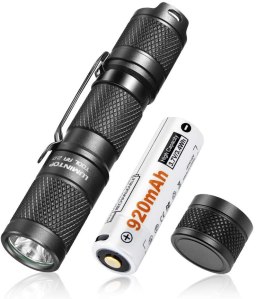 Loaded with useful features, the Atomic Bear MTP-6 Multitool Flashlight Pen is a highly durable, all-purpose piece of kit. The LED flashlight offers multiple lighting modes and comes with three replacement ink cartridges for the built-in ballpoint pen. Along with a bottle opener and hex key cutouts, this multitool also features a liquid-tight compartment and a glass breaker. This is your full EDC kit in one. 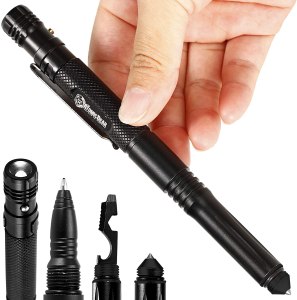 If you really want to light up the night, check out this flashlight from Wuben. It boasts an incredible 1,200 lumens, which is more than enough to flood any room, campsite or street with light. It also has four modes of varying brightness, so you don’t need to use all that strength at once, as well as an SOS function. If you keep it on the low setting, this flashlight also has one of the longest-lasting batteries with 147 hours of run time. It’s another great option if you’ve already owned an EDC flashlight or two and want something better. 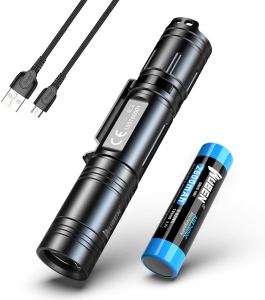 The ThruNight T1 Flashlight is a small yet powerful device with 1500 lumens of lighting power, capable of illuminating objects up to 102 meters away. Despite its powerful output, the flashlight is comparatively small, measuring only seven centimeters in length. This makes it convenient for carrying in your jeans or your backpack pockets. Additionally, it’s waterproof up to two meters under the surface and has an indicator light to tell you when the rechargeable 18350 battery (which is not included) is full and ready to go. 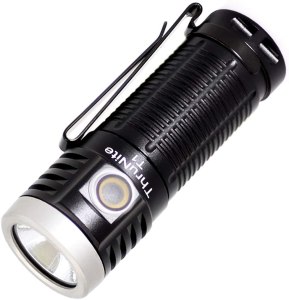 With its 1150 lumens, the OLIGHT S2R EDC Flashlight is capable of illuminating areas up to 135 meters away. Depending on your lighting needs, you can choose between the turbo, moonlight and strobe lighting modes. The device’s rounded design makes it comfortable to hold as well as easy to slip into pockets, while an attached clip allows for pocket or belt mounting. Additionally, a power level indicator located at the head of the device displays green when your device’s battery is full and red when it’s time to recharge. 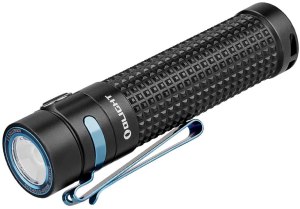 There’s certainly a strong argument to be made that this 1,000-lumen gadget from Fenix Flashlights is the best overall option for everyday carry kits. It’s one of the most popular, and there’s no doubt that this is a top-quality flashlight. As a tactical flashlight, it’s unbeatable, but there are other flashlights on this list that will work just as well for most people and cost a whole lot less. That being said, this is a powerful and durable tactical flashlight that’s worth every penny. Because it’s made from aircraft-grade aluminum, it’s lighter than most tactical flashlights without sacrificing durability. Capable of illuminating up to 656 feet, this is one of the best EDC flashlights for sale right now.

When it comes to EDC flashlights, this SureFire is the cream of the crop. It features a streamlined tactical design with a button on the back and a super-bright, wide-flood beam for awareness of your surroundings. It’s military-level stuff, but the serious outdoorsman and anyone who likes top-of-the-line EDC gear will love it as well. The SureFire uses a rechargeable lithium battery and has a fuel gauge to check the battery level at any time. It’s truly an impressive piece of EDC gear, and if you can swing the high price tag, we highly recommend grabbing one.